Linking 'Out of Town' films and tapes


I've collected all Out of Town commentary tapes from the lock-up and about 50 cans of 16mm Out of Town film. I'm going to see if I can match one tape to one film. P & F N specialise in film transfers to other media. They'll make a sample film to assess quality and feasibility. Chris Perry, from Kaleidoscope, is seeing them 13th June. I just hope I can make the match they need. 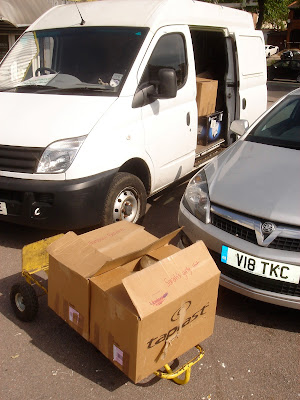 Looking at the dry-marker written phrase on one of the boxes Linda picked up second hand from someone's removal operation, the blokes at the lock-up might have wondered what kind of film I'm keeping in storage.
I laid out the tapes in the order of the numbers stuck on them... 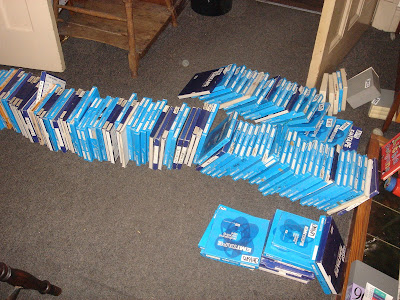 ...at the South West Film and Television Archive. I did the same with the films... 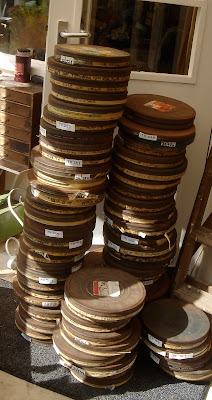 ...For the first part of the afternoon I struggled. Making head or tail of this collection stymied others. Some film's aren't even in reverse negative. Some lack library sound effects - the noises from Southern TV's library dubbed onto Stan's silent location film for Jack, when going out live, to add his studio musings. Some reels do have a magnetic strip for sound effects (and are in reverse neg), but there are some cans  full of out-takes and rushes. Some cans are so rusty I can't open them. Of course I recognise some of the scribbled titles but none appear to correlate with a tape (or v.v.). 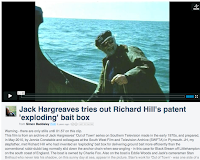 Back in June 2010, Jennie at SWFTA told me it took them ages to make just one film-commentary marriage - and they had a Steenbeck to run the film and check what it was about to aid their matching for one film -  - the 'exploding' bait-box when fishing for black bass out of Littlehampton with Richard Hill...

After a break and a cup of tea I looked again at list I held on file, assembled by Jennie Constable's husband Roger Charlesworth - one that matched numbers on tapes to numbers on films. I realised the extent of my debt to the archivists who looked after and catalogued this material over so many years. In an hour I had assembled a working sample of paired film and tape. 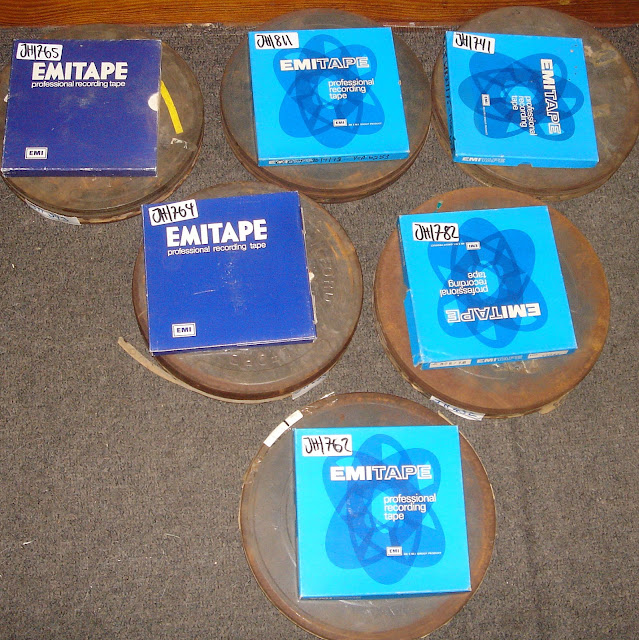 Dear Chris.  I've managed to collate 8 tape-film pairs from which to select one (or more) for Francis to create a broadcast-quality tape which we can assess as a pilot for processing the rest of the archive. I know you're seeing Francis this coming Thursday, and I am going to Scotland for a week on Tuesday. The tape-film pairs are:

Any chance I could bring over these pairs to decide which might be the best pair to work on. Perhaps Sunday or Monday? I have a preference for JH741, JH764, JH765 and JH782. Given variation in the state of film and tape Francis may appreciate a larger sample from which to select the pilot. Best wishes Simon

Reply: Excellent news Simon! I am delighted if you want to drop in all 8 pairs of film/tape for P&FN to do for you. ...So glad we can help with this exciting project. c

"When we return from Scotland" said Lin "we'll go to your lock-up with copies of the match list, lay out the whole collection, and use it to code every film to every tape. Then we can see what's left." She had, even as I was having a cup of tea, put labels on each selected film can, with the number that had been on the corresponding sound tape.
I can hardly believe that this transfer and marriage of film and sound will just happen. There'll be a problem with the state of the film. A sound track will be missing. The whole matter of synching location film to Jack's commentary will prove impossible or far more time consuming than expected. There will be big gaps in film and tape.


Dear Chris. I’ll try to drop over after lunch with the material, on my way to the allotment. So so glad of your help. I can’t quite believe we are on the road again as it were. I just hope the material doesn’t prove too unwieldy in one way or another. We have had so many slips betwixt cup and lip in the last few years of recovering Jack’s material that I don’t expect anything to be straightforward so far as this project is concerned. But I’ve also met and been able to depend on so many friends and interesting people, real persevering enthusiasts (of the kind that Jack so admired) on the journey.
I occurred to me that if Francis is able to marry sound and image on one of the pairs from the sample, we will still need to add still images for the places (usually start and finish) where Jack is musing in the studio shed. Can I suggest Francis leave this blank on any pilot DVD produced. I can then rip the DVd and add stills later as in the ‘exploding’ bait box sample DVD made from the only tape-film marriage so far at South West Film and Television Archive in 2010. Could you perhaps - if Francis can go ahead with the pilot - ask what he thinks it might cost to go ahead with up to ten tape-film combinations? I can start thinking more seriously about future funding for recovering the archive. Best Simon

Meantime I've made an appointment to have lunch with Charles Webster of Delta Leisure to discuss how things are going with the sales of their box sets of Out of Town DVDs and what possibilities there may be for releasing film of Old Country from the BFI as well as exploring the commercial prospects, if any, of the archive material in my lock-up.

Extract from Out of Town's successor Old Country from Channel 4
** ** ** **
Last night, eating salmon pâté with brown bread, Lin and I squeezed juice from the last of the lemons brought from our trees in Corfu two weeks ago. 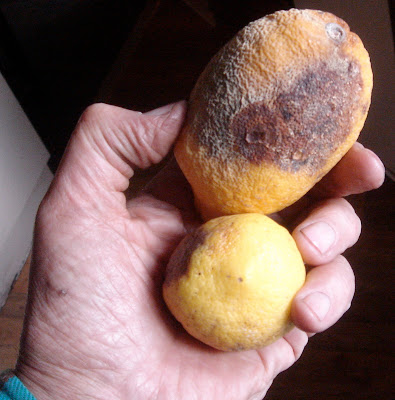 ...and early this morning, for the first time in my life, I had a fleeting dream of mum...

...stirred perhaps through sifting and inhaling the dust of rusty film cans - a flash of such evanescent happiness I woke, suffused with the pleasure of it. We were facing each other as though in an open carriage passing, floating by, a place in the countryside I knew, and know, from childhood, sun dappled grazings receding into the distance under the shadow of ancient oaks and beeches
"Now" I whispered "and at the our of our death, I will never stop thinking of the beauty of the places we've lived, My god, mum, we have been so lucky. Relaxed, she gazed at me and sighed 'I know'"


**** **** ****
We have a leak from under the bath tub discolouring the ceiling in our boiler-room below. I've prevaricated about this. The leak is minimal. It can be safely ignored
"Meanwhile the wet and then the dry rot spreads" warns Lin
"There's an immovable sheet of slate on the side of the bath preventing access to the plumbing"
Three days ago, I attached the stone cutting disk to my angle grinder; removed the cupboard that stood beneath the washbasin up to the side of the bath, and began cutting out a panel in the slate that would be invisible when the cupboard was replaced. The slate dust was stifling, settling everywhere, blowing out the window I'd opened. A tap with a hammer and a panel appeared. 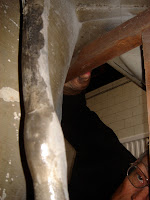 "Just great! I've found the leak. It's in the side of the old lead pipe just below its junction with six inches of copper pipe, old fashioned 1" gauge"
Lin peered in too.
The plumber we found took a look. 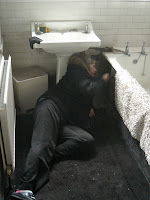 "I don't know what I can do"
He was worried about cutting the lead pipe in case it made the leak even worse. He applied liquid metal and refused any payment. 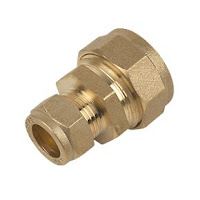 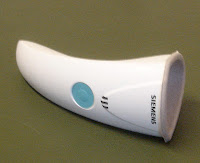 She switched the horn - a 'hearcheck screener' - to my left ear
"How many sounds can you hear?"
"What? I don't know. I think you're being rather rude"
"How many sounds can you hear!" she said; louder
"I don't know. None?"
"There were six"
She started filling in a form
"Six?"
"Yes"
"Blimey! I'm amazed."
"The thing about hearing loss is you compensate. Read lips. People talk louder. You don't notice what's happening"
"But I hear lots of sounds"
"You see lots of things even when you're short sighted"
Sylvia, the audiologist, checked my ears, peering inside with an otoscope
"No there's nothing in there"
Too right I thought, having half-expected there'd be an easily removed blockage to explain my test results.
"I'm really sorry. Being so rude" I said
I'm to have an appointment in about 5 or 6 weeks at the Hearing Services Centre at City Hospital, to have a more detailed hearing test; possibly get a hearing aid.
"I told you you should get your ears tested" said Lin when I got home.
"What?"
"Ha ha"
Well it could be interesting to see if I can extend my hearing. What puzzles me is that I'm quite sensitive to sounds I dislike, like distant amplified music late at night, the background noise of game show audiences on TV, the noise of football crowds, the sound of motorboats revving out at sea, the yapping of a stir crazy dog, as also to those I like; waves, wind in trees, the sounds of my bicycle, people in conversation in  the street, a distant piano...

Reactions from friends on FB (it may be the 'devil's machine', 'the President's earpiece' and 'tool of the CIA' but it's darned useful on occasions like this):
*** *** ***
The sun was strong on Sunday afternoon. Amy brought Oscar round. Liz came too, her pregnancy showing now. She and Amy and Lin walked Oliver in the garden. Liz sat and held him on her lap beneath the honeysuckle 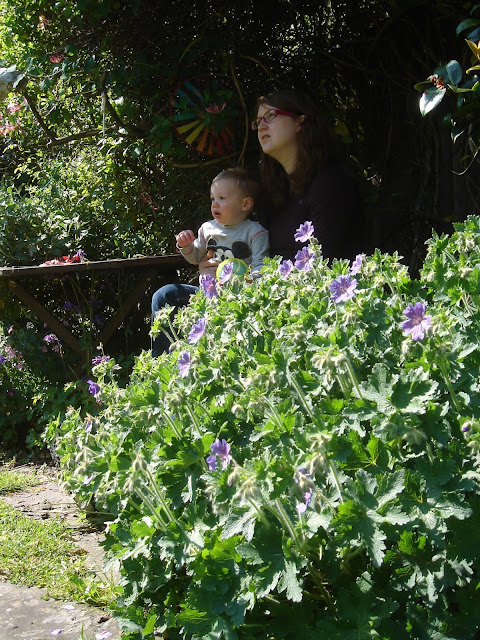 "I'll get the kitchen tidied" said Lin "and start making supper. You take Oscar round the park"
Oliver in a pushchair, I headed proudly for Handsworth Park - trusted with the precious boy. I negotiated the busy Hamstead Road and entered the park through its familiar gates. The place was as lovely as ever with couples, families, friends, individuals of all ages, enjoying a late Sunday afternoon, sitting and strolling, cycling and standing gazing. Near the bandstand I let Oliver out if his pushchair. We strolled together up the long slope that leads towards the flatter stretch of grass and trees bounded by Holly Road. Oliver walked confidently beside me, stopping now and then to examine the ground. 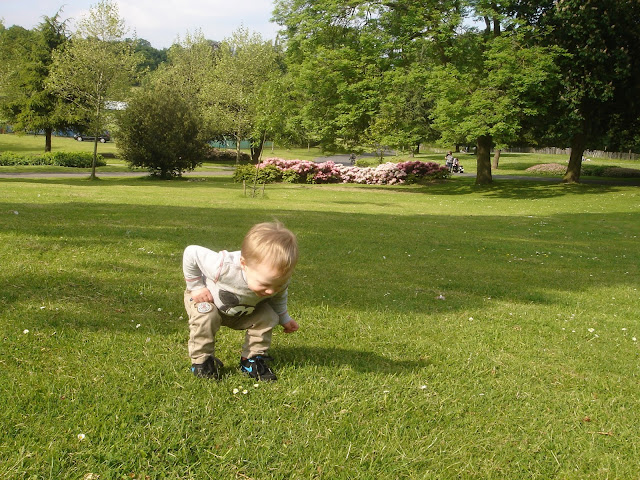 Its texture seemed to engross him. I watched as he examined the grass, picking several blades and bringing them to me - a sort of gift. He found twigs, and would have tested them in his mouth had I not gently asked for them. I held his hand on the tarmac path as we strolled homeward over the railway bridge. Back in his pushchair he looked around at people, dogs, geese and a swan flexing its wings, drinking in this new wonderful world. Will all this be recalled in his memory, in a subliminal space that, if he lives as many decades as I, will forever return as a fleeting moment of déjà vu?
Posted by sibadd