Hi Simon. Don't know if you are in UK and can make it, but there is a Kaleidoscope event on this saturday at Stourbridge. We are filming interviews for a major BFI documentary about missing tv. We will be filming David King about OoT. Can you make it and be interviewed? Cheers Simon

Saturday morning I was on my way to the Talbot Hotel in Stourbridge. The middle aged man sitting opposite wore a floppy sun hat, travelling clothes that seemed to set off his bulk, peered at a satnav in one hand and a note book in the other.
"What kind of train is this" I asked. I had been on the vehicle once - December 2011 - before but spotting a true trainspotter I thought I'd see if I could find out more.
"It's called a Parry People Mover"
"I like it"
"It's the only one in the country"
No more was volunteered; the satnav getting full attention.
We trundled along a mile of bumpy single track surrounded by greenery arriving at the one platform terminus next to Stourbridge Town Bus Station. Via a lift and a tunnel I cycled down the High Street to where Kaleidoscope was holding one of its regular get-togethers, found Simon and after a cup of tea was sat with David King to be interviewed about the way we'd arrived at the 'Lost Episodes" of Out of Town.


Chris Perry asked questions. Rory was behind the camera. I extemporised about my stepfather and described Out of Town - not easy, as the tags 'country life' or 'rural pursuits' misses out on what was really a vehicle for my stepfather to enjoy chatting to a few million people about his favourite subjects - for instance rabbiting with nets - with brilliant illustrations from his camera-toting friend, of twenty five years, Stan Bréhaut...

...and David told how he had discovered and saved the Out of Town episodes that Delta on the initiative of Charles Webster, put together and put on sale last year (Note: In Sept 2015 Delta became insolvent and the following month I terminated their licence on grounds of 'breach of contract', a condition that applies to any sold on copies of Delta's OOT DVDs). I spoke also of the 'unwieldy material' brought in April 2012 to a lock-up in Birmingham from South West Film and Television Archive - Stan Bréhaut's 16mm reverse negative location film with library sound effects... 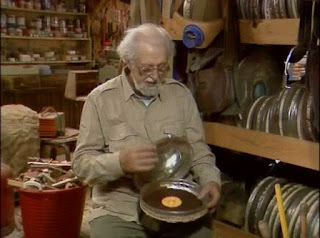 ...and a whole lot of - so far unmatched - ¼inch reel-to-reel tape of Jack speaking to these films and introducing each episode. I spoke briefly about technical challenges that I'd explained in more detail in the account included with the Out of Town 'Lost Episodes':


...I hadn’t only begun to grasp that the background sound on Jack’s programmes was added later – from sound effects in the library at Southern synched with events on Stan’s film. What was I to do with hours of such film? Jennie at SWFTA gave me a clue. She and her husband Roger, also working part-time at the archive, showed me a shelf of ¼” reel-to-reel sound tape in cardboard boxes. These for no obvious reason contained Jack’s voice as he talked in the studio from his set – a shed - and his commentary on Stan’s film for that week’s episode of Out of Town. It had taken hours to find the tape that went with the film. There was no order and no titles that allowed simple one-to-one matching. Roger, using a Steenbeck machine that could play separate film and sound tape simultaneously accurately splicing sound to vision. He then digitised the result and we had a 1975 episode of Out of Town as a gift for Richard Hill and his family. Well nearly. At the start and often at the end of each episode of Out of Town the viewer would see Jack  sat in his studio ‘shed’ from where he’d say “Hullo” before moving seamlessly into talking about Stan’s location film, run on a monitor in front of him in the studio. This all went out live. The location film would end. We’d see Jack again in his shed for a few remarks and a “cheerio” and the gentle signature tune Recuerdos de la Alhambra. So we had Jack’s commentary and location sound effects, but we had no picture of Jack in his shed. Richard’s film with which he was delighted came to him on a DVD courtesy of SWFTA with a stills of Jack inserted over the recording of his studio introduction. But what about the sound effects; of traffic, of cattle lowing, a fish splashing, wind in the trees, a bucket dropped? “People fill in the sound if you give them a clue” was Jack’s reasoning so I was told recently by one of Jack’s old colleagues, David Knowles. He’d certainly fooled me. I learned that my stepfather had made a point of asking expert sound people not to get “too clever”, inserting every possible event that might have had a sound. “Just make it sound like outside and synchronise doors banging and gun shots” I was slowly understanding why it was so tricky to trace whole episodes of Out of Town. “Jack loved to do high quality television on the cheap” added David who’d produced Jack’s successor programme - Old Country - for Channel 4 in the early eighties. My youthful memories of Jack musing about technical challenges were being jogged “I don’t want to go out in the countryside with a TV crew of half a dozen and a pile of kit. They frighten things away.” I learned after a bit that even Jack’s director George Egan stayed away, as Jack with Stan in essential tow went on location. “The finest outdoor cameraman in England” he called him, shooting silent, sound added later, and live continuity by Jack’s when broadcast. Jack knew that what made TV different from cinema and more than just lesser picture quality on a small screen was being live. He was stimulated by the risk of going out live but much more he relished the knowledge of talking there and then to his invisible audience. “We filmed nearly 1:1” explained Jack years later “The normal ratio of used to edited film is 10:I for the sort of thing I do. In commercials it can be 1000:1.” Jack and his team did minimal editing, had a minimal set and a minimal crew and it went out live with Stan’s silent location film plus library sound effects....

Jack Hargreaves tries out Richard Hill's patent 'exploding' bait box from Simon Baddeley on Vimeo.
...and an episode about rabbiting from Old Country, successor to Out of Town, screened in the early 1980s on Channel 4 with Stan's successor, Steve Wagstaff, behind the camera..
Chris Perry, seeing the OoT film cans and sound tape I'd brought with me to Stourbridge said, to my delight, that he would introduce me to an ex-BBC expert who would know what needed to be done to wed sound and image from the archive. I've been looking for ways to get this done for two years now. I so hope this will lead somewhere.
In the early 1990s, When I was 50, I began searching for my dad, not the parent I'd come to know, but the individual who met and married my mum in 1940, whose DNA is mine... 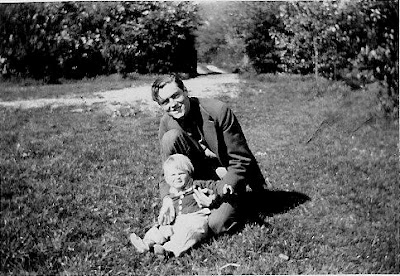 He died in 1973, In the midst of war my mother and he, having made my sister Bay and I, were divorced. Living with my mother I would only get to know my dad after he'd been married over 10 years to Maria, who he'd met in Athens in 1949. Twenty years later, I'm learning more about Jack, the step-father with whom I enjoyed my childhood and youth from one Christmas in 1948. My dad's life is part impenetrable; hidden by his profession. He served in MI6 (Greece, Brussels, the Far East, London, Washington) until his early death at 52. My stepfather's life, including so much that was very public, is made puzzling by his versatile and invigorating self-invention. The novelist Graham Hurley,  who worked for Jack at Southern TV, wrote....


...It was this wonderful marriage of fact and fiction that made him such a great broadcaster (and inspiring boss). Like so many men from that generation including George Egan (Director of OoT), who flew SOE agents into France aboard tiny Lysanders), Jack had been through something infinitely bigger and more scary than any of us would ever find in television and it gave him a breadth and a perspective and a degree of creative mischief that was utterly beguiling. I put a number of the Out of Town programmes onto tape (Stan shot mute film; Jack's studio musings became the sound-track) and after a while I began to spot where fact strayed into fancy. Viewers, and gobsmacked youths like me, loved him. Like Stan, truly a buccaneer... 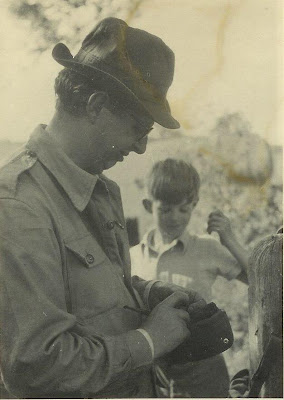 *** **** ***
Lin was entertaining Oliver most of the day after Amy.on her way to work, dropped him off. I got to see him later. He's not saying much tho' making lots of interesting sounds. We played on the sunny lawn after I got back from Stourbridge and later, for tea, sat Ollie in the same high chair used by my mum, by me and my sister, by our children Richard and Amy... 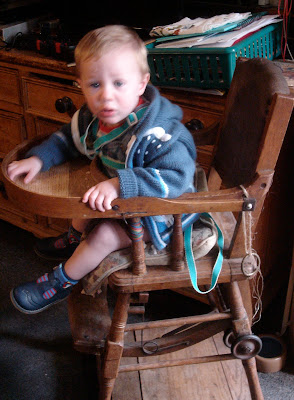 ...Guy came round after work to collect his son.
I started working on removing woodwork and tiling holding our bath. It's got to come out so we can do something about growing damp in the room below coming, it seems, from under the bath. The bath was put in with great firmness in 1935. Getting underneath it, let alone extracting it,  is going to be a stinker given we want to save the long slate panel that runs beside it and seems immoveable. I removed the locker I built twenty plus years ago so that I could start trying to tease out the panel. Hopeless. I'm so tempted to take a sledge to the slate. But if I do I'll regret it. What a mess. 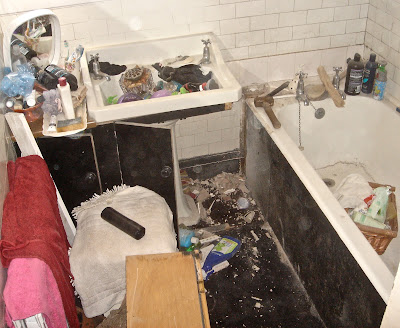