The blue of the sea we've left behind


Sat either side of the aisle we saw lozenges of perfect blue as our plane ascended, banking in a wide circle that brought us over Pantokrator, then the high coast of Albania, before sea and land receded below bright white clouds. On the flight from Corfu we enjoyed prosciutto and cream cheese sandwiches in a round loaf from the village bakery made up for a picnic before we left.
We landed around one-o-clock at Luton with a slight bump that made someone exclaim. After an hour waiting by a carousel for our bags, a timorous tannoy voice apologised for the delay, "caused" - with fudged syntax - "by operational reasons".
A resigned British crowd, but for a tearful mother with a toddler, awaited belongings from Riga, Malaga, Faro, Palma, Corfu and somewhere else - luggage unloaded in no special order.
"Sunday lunchtime's always diabolical" said a slightly harassed women fielding mild grumbles at a service desk. Thirteen flights had landed at the same time causing a "massive back-up"

"I don't recall such recurrent inefficiency in Corfu" I said to Lin "Yet people are wont to to throw up their hands at Greek confusions. When have we encountered that?"
The crowd was a lively metaphor for British acceptance of our economic mess. Jan wrote just now:

*07 June 2013 Watchdog warns cuts could lead to collapse of councils....Local authorities must come clean in explaining to residents what services they might have to cut in the next Spending Review period, a parliamentary spending watchdog has reported.  A Public Accounts Committee report into the National Audit Office’s (NAO) study, published in January, into the financial stability of local authorities, finds Whitehall doesn’t properly understand the overall impact of the 28% budget cuts taking place over the existing spending round. The MPs expressed fears those councils more reliant on government grants - which serve poorer and more vulnerable communities with higher demands on services - are experiencing the greatest spending reductions. Whitehall does not fully understand how budgets cuts are affecting vulnerable groups, the PAC said. ‘This raises the spectre of the worst-affected councils being unable to meet their statutory obligations,’ Ms Hodge added. She urged the Department for Communities for Local Government (DCLG) to get a better understanding of how cuts affect vulnerable groups and demanded to know how Eland House would respond in the event of multiple financial failures of local authorities....

We left Ano Korakiana at 1030 after a rush of tidying. Vasiliki and Effi came out to kiss and hug us. I dropped in on Katerina to say 'goodbye'. All said the customary "Kalo taxidi, Καλό ταξίδι" as we loaded our bags into the car and I stood beside Adoni to say bye-bye to our house, our other beloved home.
From Digbeth Coach Station, our taxi dropped us home just before seven; Oscar there to greet us. Before rain starts I must mow the grass - as green as the blue of the sea we've left behind - and get on with the in-tray waiting for us.

*** ***
What of Summersong, now floating again at her fore and aft mooring in Ipsos? 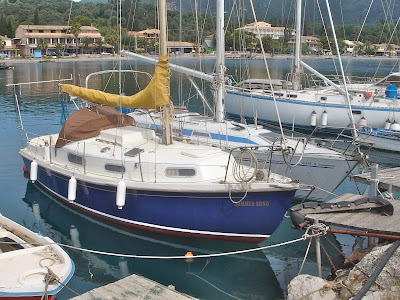 Dave has done great work on her exterior. Now, he sets to on the interior!
We've made lists of what more needs to to be done to have her sailing (and motoring). Two days ago I was inhaling a heady whiff of fibre glass and oily bilges. On hands and knees I was reaching through a small access trap to sponge away buckets of blackened water collected in the shallow space below the cabin floor - not a leak, not seawater, but rain that entered when, last year, the self-draining plug holes in the cockpit were blocked with old flaking paint. 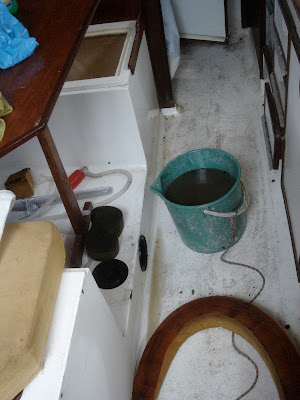 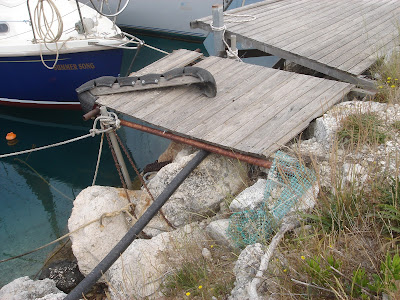 ......Running and standing rigging are fine. The engine's working well but I'll only be confident after sea trials - for me as much as the boat - with wind and wave. 'I must go down to the sea again, to the lonely sea and the sky'...and as Spike wrote 'I left my shoes and socks there, I wonder if they're dry?' Lin even said "I\d like to visit the Mani" Is that possible? Could we really? 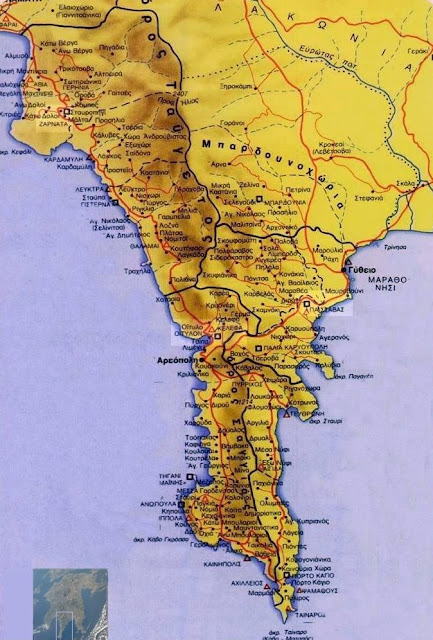 *** *** ***
“There’s the Sea of Tranquility”
Martin was gazing up at a gibbous moon, recalling how his Dad had built a reflecting telescope with which he’d shown his son places on the moon from their garden in Birmingham.
“I haven’t got my glasses or I could make out the crater of Copernicus”
“Over there, that one bright light, with darkness to the left, marks the border with Albania. The line of twinkling lights further south. That’s Sayada and then even further there’s Igoumenitsa”
We looked at the Plough overhead and subtended the angle of the last two stars on its front to see the North Star just above the edge of the crags above the village, dimly underlit by our street lights.
“The moon’s too bright to see the Milky Way”
We recalled wondering, on childhood nights, at the sight of the full starred heavens, the edge of our galaxy strewn from horizon to horizon, across the abyss of black space.
“There’s too much light pollution too”
Along the closer horizon of the island lay the glow of the city. I called to Lin and to Martin’s wife, Sandra, chatting downstairs, to come and join us on the balcony. A few days before we returned to Birmingham they, our best friends in England, were our guests in Ano Korakiana.
We listened to the sounds inside this space, stood on our balcony together; people talking below the village, a lot further off than the Skops owl calling to another among trees beyond the houses edging Democracy Street. There was a dog complaining in the distance.
“That’ll set off all the others” I said as barking spread closer. Cockerels do the same but they were quiet at midnight.
The blinking lights of a plane appeared silently over the hills between us and the city, turned towards us and became a sound droning swiftly over Trompetta.
While he’s been here Martin has drawn a plan for a new jetty for Summersong, helped show us how to arrange the frame and hinges for our bedroom wardrobe .... 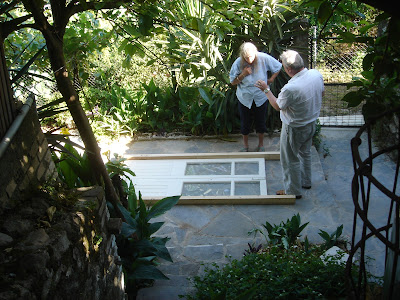 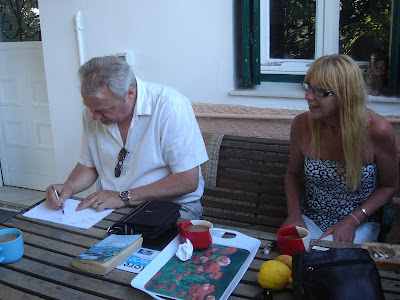 and, frustrated by its eccentric grating on the marble floor of the kitchen, re-hung the door between it and the dining room. A little packing on the old latch, longer screws in the hinges, a few millimetres planed off the bottom of the door... 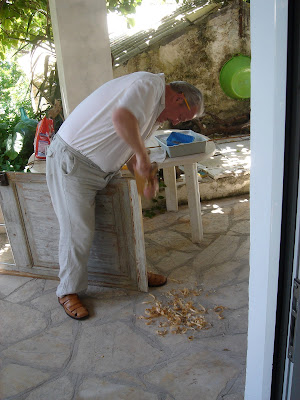 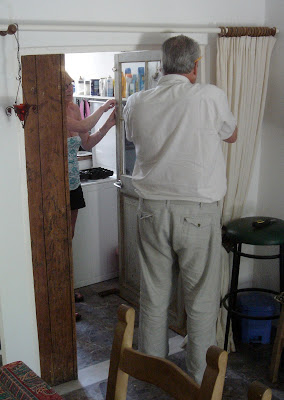 ...the job done in twenty minutes and years of minor irritation gone.
“So why didn’t you do that?” says Lin.
“I tried but I didn’t know how and it sort of worked with the chain and the hooks”

We’ve been go-betweens for house improvement for Steve in England who wanted the walls of his house, next to the café, rendered. All work had stopped after his regular builder had to go to Ioannina for heart surgery. We’ve got a local builder to start rendering, sending Steve pictures as the work proceeds.


Dear Steve. Before talking to A, our friend Martin, a builder/architect, currently staying with us, inspected your rear wall. He noticed that your wall ends in an uncovered section that is part of X’s property. In Martin’s opinion, X's strip of wall, if not rendered at the same time as yours, would let damp into any new render on your property. X, as you'd expect, says he’s no money to make this strip good…We tend to agree with Martin that this extra cost would represent a saving for you in the long run….Do you want the short iron bars sticking out of the wall, that were used to support a vine, removed? Let us know what you think. Best, Simon

Well I'm like a spoilt kid at Christmas, I can't stop getting the picture up and looking at it… After so many years of neglect the little house is finally getting some TLC, which its deserved after standing so many years. Wish you could see the smile on my face. many thanks for organising and overseeing the work on my behalf. Steve

While they were here we showed a little of the island to Martin and Sandra, walking, driving, swimming, eating out and eating in, enjoying drinks at Stamatti's café Piattsa, seeing the city and the country, ascending to the top of Pantokrator and down to the sea at Paleokastritsa.

Picnicing below the oak tree on the top of Angelokastro we saw, at first cleverly camouflaged in its deep serrated bark, a host of moth caterpillars - indeed several colonies attached to different parts of the tree. 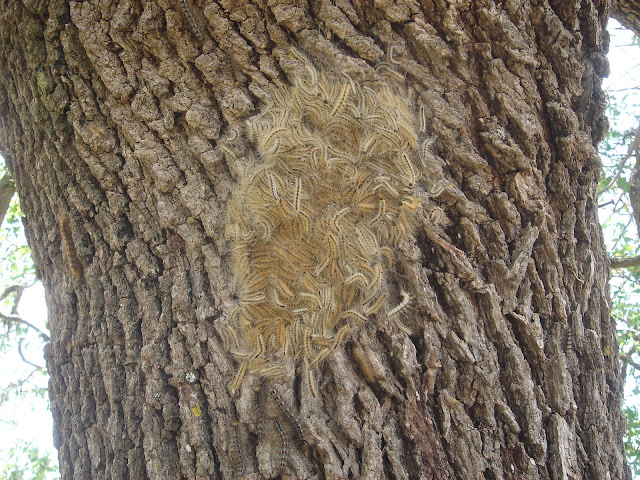 *** *** ***
From the Ano Korakiana website - our neighbour's daughter Dimitra, flutist, is first left: