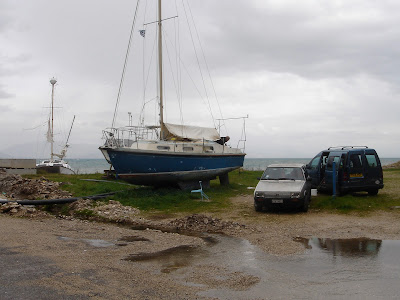 
Hi Simon, up date on SS old engine out, engine bay cleaned out and eng. Beds built up and glassed in to fit new eng. fitted on new mounts, prop shaft cupling machined to fit new gear box now all lined up, all the old wiring has been taken out and will need to be re done to make good as new again, new eng. controls will have to be found as the old ones will not work, allso eng. stop controls new, new skin fitting for water intake to be replaced, new dash surround made and fitted for new eng. wiring, the hull to be scraped smooth then antifould, the paint work has been filled and rubbed down ready for the under coat and the new boot topping, also the wood round the toe rail to be re secured and rubbed down and sealed…

D may say he’s dyslexic. We complement each other. The Greek word δυσλεξία gives a medical term for being bad (δυσ, dis or κακο, ill) with words, allowing me to invent a term for my condition. If machinery is μηχανήματα mikanimata, I suffer dismikania δυσμηχανία, severe dismikania indeed, which translates as βαριά δυσμηχανία – if I’ve got the endings right. In our two culture world there’s no word for such a condition, so I remain ‘kack-handed with machinery’, possibly ‘mechanically illiterate’. It’s not fair. I’m delighted at how things are going with our boat because D reads and writes machinery so well. 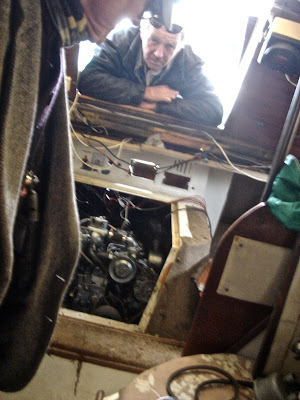 “Ah well” sighs Lin “it’s only money”
Later I visited D at his place and saw Summer Song's old engine
"Blimey"
"It works. I'm going to adapt it to work as a generator"
I tried lifting it a few inches. Far heavier than the new engine and half the power; an early 9hp Yanmar good for its day, though not even intended as a marine engine.
“Your new propeller,” said Dave “imagine the present propeller revolving in a big block of butter. It’s got a diameter of 13 inches and a 9 inch pitch. One turn drives it through 9 inches of butter. Get one for your new and more powerful engine that’s 13 inches diameter with an 11 inch pitch. One turn drives it through eleven inches of butter”
“Wow. Yeah. Right"
From seeing progress on Summer Song for myself, including the work on painting the hull and plans for repairs to hatches and interior, I cycled back up the long slope between Pyrgi and Ag.Marcos, stopped off at Sebastiano’s invitation at the Agricultural Co-op where work was in noisy swing; olives, twigs and leaves into a hopper at one end, a steady stream of oil pouring into a plastic containers on a weigher at the other end, having passed through a couple of separating washers, a crusher and two centrifuges.
“Coffee?” says Sebastiano.
He offers it to two waiting farmers; cooked up on a small propane stove and served in plastic cups, a pungent dark mix of skirto helliniko. I sip mine. The others let theirs cool.
“Some oil?” asks Sebastiano
“Malista!”
He breaks off a soft warm chunk of crusty new brown bread and points me to a separate pipe. I dip and eat. Who needs extra extra virgin from F & M? 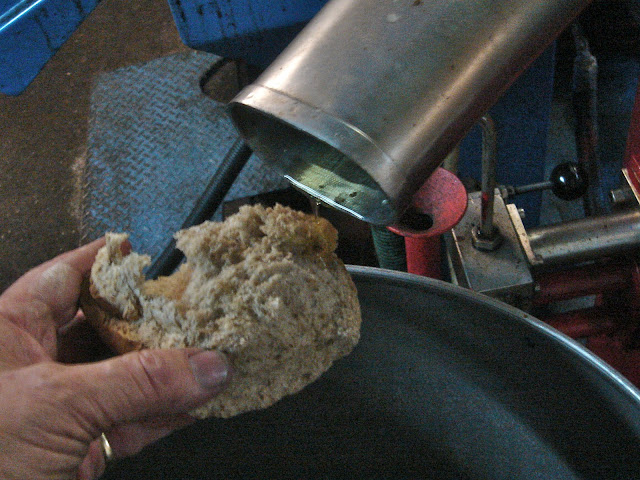 *** ***
Horrid news. An email from Richard Pine’s daughter. He’s been taken ill and hurried to hospital and won’t be able to make lunch next week. His last email on 6 Feb had said


I can't do Thursday, but I could do Wednesday at 1.30 in Perithia…Let me know. Harry's mother is doing new dishes, so it may well 'vaut le detour'. RP


Hi Andrew, Simon. First of all a very big thank you for all the hours you spent with the Chairs in xxx and us - I am happy for you to invoice us for the sum in the bid. Cllr X had a panel meeting yesterday evening...she is a changed woman, the other panel members noticed too (judging by the look on their faces) I felt very proud of her!  Z had a meeting with Cllr K earlier in the week, he reported back to me a noticeable change in him...he is much more direct and took the lead saying exactly what it was he wanted to discuss. The seeds you have planted during your time here seem to be sprouting! I will have a look at the report and discuss with Z and get back to you by the end of this week with any comments we have. It has been a pleasure working with the both of you - I cannot speak for the others but it has certainly made me reflect on the Members we work with and come to a better understanding of what motivates them and to see things from their perspective. I think this will be important in making sure I can provide the most appropriate support possible. Cllr K is coming in on Thursday to meet with the team and discuss a number of issues. I suspect one of these will be member induction.....perhaps we will be working together again some time in the future :)  All the best, Y

This, plus a request to second mark a slightly tricky – from an assessment point-of-view – paper from one our students and, from our director, for some notes on one of my papers to be used for conference presentation next week, and a date to run a morning seminar in March for an Essex district.
*** ***
Friday was jocund; the contrast with the previous day and today, astonishing, a small shift in the sun’s angle and zenith, the movement of water in the deep Adriatic, shifts everything. The olive groves wear a sheen as their leaves turn in a gentle steady breeze, no longer carrying winter chill. Trees are budding, the cherries blossoming and the sea is blue blue. Cut pieces of driftwood from the shore at Ipsos are drying in the garden. Drenching rain should will have rinsed them of salt. They steam under an almost cloudless sky, drying in a mix of sun and breeze that resists condensation. Mere wisps float high in the blue - failed clouds over a surging updraft of warmth on which a pair of eagles glide in contra-rotating circles, disappearing and reappearing over the crags.
Self-taught plumbing continues. We've replaced the flush float in the WC. We cleaned the sitting room stove pipe, a job most people do every three weeks; the soot already sifting into the compost heap. 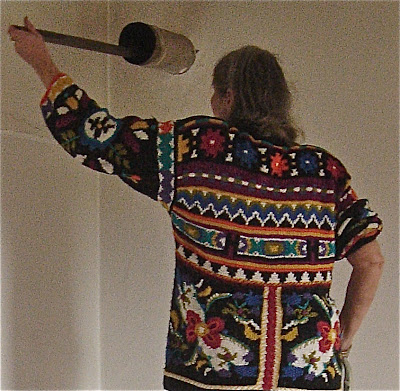 I put a new leg on my table, the one that goes to and fro between our side wall and Effie’s garden when she needs a rows of tables for a party. The old one had rotted at the top and, as we only just noticed, had been attached originally with its taper on the outside.
“A touch of cabriol there, Baddeley!”
“Wouldn’t that be a good way of posing a photographer’s model. ‘A teeny touch more cabriol darling’” 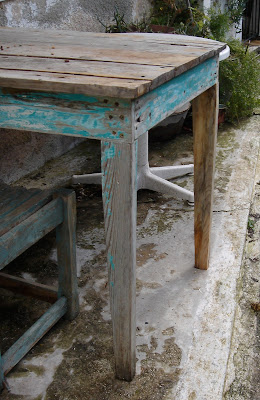 I sanded off a little more and gave the top a good shake
“Firmer than before”
We’ve got plans to level and cement the floor of the apothiki – our excellent Greek shed that got filled several feet above its proper floor with discarded rubble by feckless John before we came. Paul and Lula are arranging to remove the bazza, ή μπάζα. To reduce their work and our costs we are going to level the floor above the earth and concrete it. 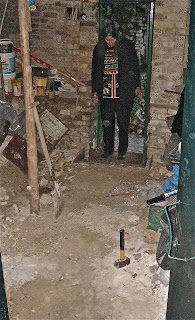 I must remove the garden stuff that’s accumulated in there so rubble can be levelled to the top of the three sided box we’ve put at the garden-side door. Only what’s left needs to be carted away. Then we can get the place organised with a work-bench, shelves and stalls for firewood – logs separate from sacks of kindling.
“Oh no! Ruddy hell” cries Lin “The boiler’s leaking”
For a few minutes I hoped it was a failure of the big rubber washer around the heating element. I tightened the six bolts to no effect. Drips were coming from the boiler casing, soaking towels, spreading over the floor.
“The glass lining must have broken”
“That earth tremor?”
“Perhaps it’s just a cheapo unit. Oh well I’ll phone George in Kato”
George agreed the boiler was probably shot; suggested how much a replacement ought to cost and said “Don’t just go for the cheapest”
“Thanks George”
I relayed the news “One more call to another expert this evening and then we’ll buy a new boiler and try to fit it ourselves”
And next day the weather turns wet and grey again.


My translation: First meeting to plan Carnival. A meeting was held yesterday evening - Friday in the hall of the Association's inaugural year for our carnival, to raise old and new issues, among us, our friend and fellow villager - συγχωριανού μας - Simon Baddeley. This first meeting addressed some key issues to be debated before final decisions. A pleasant surprise was the unanimous position of young people who participated in the debate in favour of maintaining the traditional characteristics of Korakianitis Carnival.

Issues raised. Money of course - in these difficult times - and should there be a charge for attending the dances? Also should the main evening event be in the Co-op - as was traditional - or further away below the village at Luna D'Argento? Lots of other details were covered down to chairs and tables and food and drink and the preferred route for the carnival procession. I was even asked my opinion and luckily could express it thank's to a fellow villager. George, whispering in my ear. How I enjoy these meetings - the company (I seem to know more and more every time - both the language and the people), the many moods and the cacophony of debate that brings decisions. Village democracy at work.