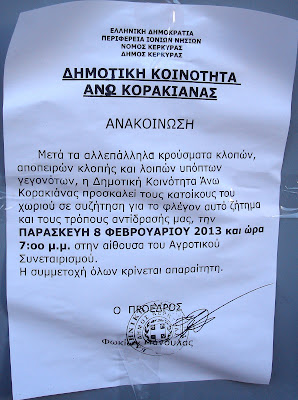 Alarm in the village about thievery, culminating in an attempt by two youths wearing hoods – according to those who chased them off - to break into the Agricultural Co-op. The masked miscreants fled into the woods above the village where they were pursued by hunters until two in the morning. Friday morning Cinty phoned to tell me there was a meeting to discuss attempted-burglary - Συζήτηση υια τις απόπειρες-διαρρήζεις - to be held in the upper room of the Co-op - Αγροτικού Συνεταιρισμού - at 7.00pm that evening.
“Are you going?” I asked
“Yes”
“I’ll go too and you can translate for me. Lin can stay and guard the house”
I was in the Co-op by seven. There were a good number present some of whom I knew. I chatted with the Chairman of the Co-op Sebastiano Metallinos who speaks excellent English.
“It’s a fuss that plays to the right wing elements” he said. “The chances are that most of the crime that’s causing the excitement is local, people from the village who know their way around. Why did those two bother with masks? It can be dealt with by having a word in the right place. This was how we handled a similar panic when I was a councillor a few years back. You find out whose up to mischief. You let it be known you know who it is. Perhaps pay a visit or two. Have a word in a few ears. It stops. The Right blame strangers and foreigners. We play into their hands.”
Cinty arrived at 7.30 knowing nothing would begin until around 8.00, when a panel - the President and members of the Local Council - Fokion Mandilis, Nikolouzos Charilaos and Spiro Tsirigoti, also the Deputy Mayor of Corfu, Fanny Tsimpouli, and Mr Papadopoulos, Mayor of Kato Korakiana’s Local Council - τον Πρόεδρο και τα μέλη του Τοπικού Συμβουλίου (Φωκίωνα Μάνδυλα, Χαρίλαο Νικολούζο και Σπύρο Τσιριγώτη), την Αντιδήμαρχο Κέρκυρας Φανή Τσιμπούλη και τον Πρόεδρο του Τοπικού Συμβουλίου Κάτω Κορακιάνας κ. Παπαδόπουλο.
The problem was acknowledged. The Mayor of Kato Korakiana spoke of the trauma of a break in that so scared his family his young lad wouldn’t go to the loo on his own for six months. The deputy mayor of Corfu – Fanny Tsimpouli – told the meeting that there would be two new police officers at a revived police post at Ipsos - επανα-ενεργοποίησης αστυνομικού στον Ύψο. €140K had been made available for this, so villagers wouldn’t have to rely on the police station – 15 kilometres away by road - at Paleocastritsa. Hardly had she sat down up stood a small succession of enragés – familiar at law’n’order meetings I’ve attended in Handsworth and Lozells. 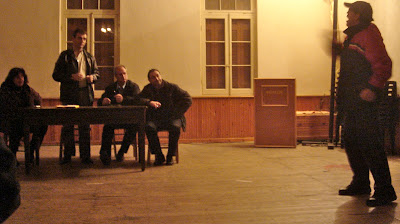 “Why isn’t there a police officer at the meeting?” I whispered to Cinty
“He’d probably be lynched” she replied with a grin
The evident fact as in other places I know is that the police are very understaffed.
“..and that” declared Fanny Tsimpouli was “a political issue” which required the village to make a political response. She suggested a peaceful demonstration by villagers at the Tzavros T-junction on Monday. There was a call from the Chair for a show of hands. About a dozen arms were raised from among the 50 or so residents present. The enragés were swift to decry the futility of such an action, preferring to raise their voices and gesture at the panel for their failures.
“What are we supposed to do? If we catch someone in the act and hold him."
"Will the police even come?"
"And if they do, won't they make us let him go?”
These protests were received with murmurs of agreement around the room. Outside thunder came with a mighty clap. Rain leaked through the roof above the door, the main drips collected in a bucket. Much of the meeting served as a big safety valve for frustration and impotence. But as it proceeded, voices of reason became increasingly predominant... 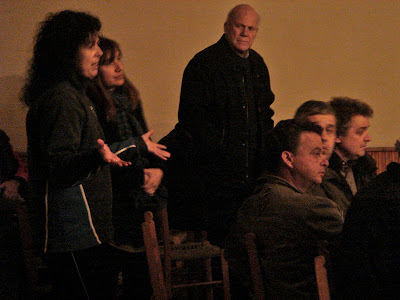 ...with astute questions about practical things like telephones, about neighbours keeping even more watch on behalf of their neighbours, and about the need to maintain dialogue with local government and the police; to have continued meetings to debate and share information on the village’s security in these hard times. The meeting ended with a good proportion of residents signing up to be part of a village watch, with no-one quite clear what that involved. I had really enjoyed being there, understanding far more than usual with Cinty's discrete translation and not relying on my reading of the colourful non-verbal dimension of such events.

*** ***
Thursday 14 Feb: Cinty phoned me with the news passed on to her on Democracy Street by one of the residents at the Friday evening meeting that, partly as a result of the fuss that was made that evening, Corfu police have caught a gang of ten men made up of Greeks and Albanians who - allegedly - have been carrying out the burglaries and attempted burglaries, including the one on the Co-op, about which villagers were complaining.
*** ***
By and large villagers don’t go for ‘walks’ (βόλτα). My sister’s husband came to mum’s memorial service but seldom if ever came with her to the Highlands.
“There are wolves up there” he’d grumble
In answer to his question about what she actually did when in Scotland, she’d mentioned among other things “We go for walks”
“Where to?” he’d asked bemused, even a little disparaging. He’d made a similar remark about my liking for writing letters.
“Haven’t you got something better to do with your time?”
Long letters were one of the things I so enjoyed writing to mum. Now my paper lies with fountain pen and envelopes untouched. It may be an archaic thing I will one day explain to my grandson.
Lin and I have walked since our separate childhoods. In some UK census account ‘walking’ is listed as one of the favourite recreations of the British along with gardening and DIY. I don’t mean gardening to grow food anymore than walking, in the listed sense, is to go anywhere but back to where you started or that DIY is about saving money.
We walk up and down and around Ano Korakiana, threading its maze of steep and winding allies where public and private space mingle between buildings fitted like jigsaw pieces to the spaces available; wood, tile, stone, plaster and concrete grown in a manner organic, and in beneficent contrast to the accursed ferro-concrete villas sprinkled suburban style across the Corfu countryside, raising their unsightly profiles above treelines, digging concrete footings into the roots of shattered olive groves. I know the street that runs through the centre of the village, its layered archipelago of different coloured asphalt like tundra glimpsed from a polar flight, manhole covers and those variations in breadth where experienced drivers know two cars can pass one another, perhaps folding a wing mirror for safety. But we have yet to discover all the tributaries that flow into Democracy Street, though we have become familiar with the twelve or so paths that climb up from almost parallel National Opposition Street Οδός Εθνικής Αντίστασης; several running to and from its four optional bus stops, with the longest – San Jacobo – running in paths and steps from the centre of Venetia down via a metalled section to the lower road, perfect for a long circuit of the village bounds. Others descend below National Opposition Street – normally referred to as 'the road to the sea at Pyrgi via Agios Marcos' – to another serpentine road that starts with a tight hairpin junction onto a steep hill at the eastern end of Ano Korakiana to a T-junction over a mile away on the road that connects the village to the main Corfu Town-Sidari Road. Along this road the other afternoon we took a hundred metre detour to Kiriaki Church...
... where our neighbour Lefteri first told us he was helping construct a bell tower. It’s done and the church repainted. 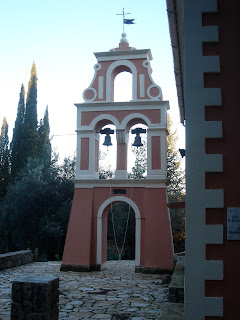 Nearby on a wooden telegraph pole we saw one of the regularly posted death notices - this one for Lefteris' brother who died in Athens only the other day. 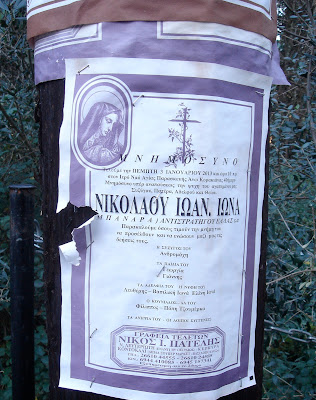 Walking further east into fields below we came across a scruffy flock of sheep who gathered at our passing. 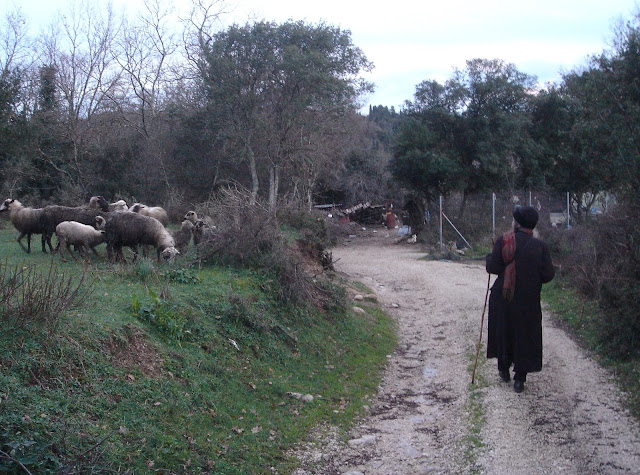 On a turn at the western end of Democracy Street just beyond the shop there’s a narrow steep road surfaced with corrugated concrete that leads into Ano Korakiana’s west end, the area called Mougades. It has a traffic light to prevent impossible meetings of vehicles and leads through dense buildings to yet another road out of the village – one that passes through olive groves, high banked in places, descending about a mile and a half to join the Sidari road. I can hardly recall meeting a soul on this route out of the village. Advance a matter of yards left of the point where it meets the main road and there’s another road that goes a mile back into the village – ideal for a walk to where we started. A good thing about my attendance at the busy meeting last Friday is that more people recognise and greet us on our walks - including one of the angriest of those present who, as he worked in the garden in front of his house, smiled and waved in the friendliest way.