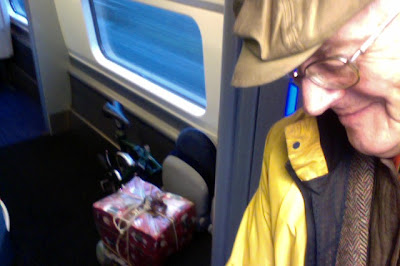 To London with Christmas presents for the Greek side, dropped off near Piccadilly, then on to Marble Arch to catch a central line tube to Shepherds Bush to collect the masters for Out of Town whose rights I have at last bought from Endemol. Vic - Victoria - greeted me in reception and pointed me to the package waiting for me to collect, containing the signed agreement that transfers all royalties due to Endemol on sales of my stepfather's DVDs to me.  I shook her hand and said can I take a photo - with my laptop...

...and so on to Hounslow Civic Centre for further work on coaching scrutiny chairs.
*** ***
Talk about something funny going on on the roof tops. A massive hole is being dug in the back garden of a neighbour's house. Lin's been on the phone to the council and been passed back and forth. Cllr Zaffar came to have a look and is on the case but says "with the new planning legislation there'll be more of this! Try getting in touch with the BBC...Adrian Goldberg: 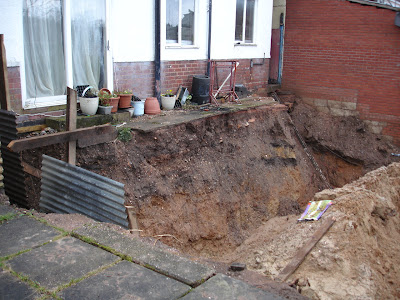 Dear Adrian. I am Chair of the Beaudesert Road Residents in Handsworth. We do not usually get involved in difficulties between neighbours. We try to represent the interests of all residents of our street. This is a rare exception to which I request your most urgent attention.
Mrs Jo (Josie) Robbins is living alone at xx Beaudesert Road, Handsworth  (her husband John recently went into care). Jo's phone number is 0121 523 xxxx and she would be ready to chat with you. Her daughter may be with her as Jo is currently distressed.
Going into her side alley a few days ago where she usually goes to enter her garden Jo found just beyond its gate an abrupt drop of over eight foot. Luckily it was daylight and she stopped herself in time.
She asked me and my wife over to look at building work being done in the back garden of her neighbour’s home - xx Beaudesert Road, B20 3xx
A massive hole had been dug, in anticipation of getting planning approval for an extension to the house of Dr Din Shariff under planning application 2012/05049/PA
We have tried to get some action from Birmingham Planning enforcement, from building safety - to whom the planning officer directed us - and even from Health and Safety but our concerns have been jockeyed around between these services with excuses about lack of power and even the suggestion that Mrs Robbins only recourse may be civil action - an unedifying prospect for her.
Meantime the work continues often until 9.00pm at night with enormous amounts of earth being removed right up and in places beyond the boundaries of the garden of number 29.
The householder called on Mrs Robbins a few days ago and gave her an apology for removing all her side path, patio wall and fence, assuring her it will all be made good, but at the moment the work has not had formal approval from the Council Planning Committee (I phoned the department to check this a few minutes ago).
In our opinion corners are being cut in an alarming way, and a dangerous precedent created, with the prospect of additional harm to community cohesion and neighbourliness as well as personal safety.
Cllr Waseem Zaffar , a most excellent ward member as you know, has now visited the site and is making enquiries but at the time he was at 29 Beaudesert Road on Monday afternoon he suggested to me that we contact you.
I attach some photos taken by Linda Baddeley that I think you will consider make the urgency of the problem self-evident
I know how busy you are but your attention to this matter would be enormously appreciated. Kind regards, Simon (working in London today) 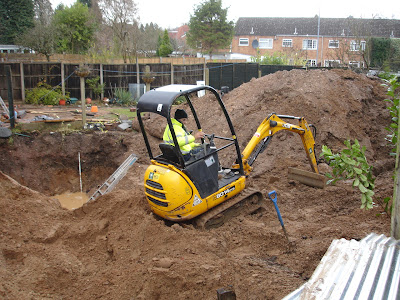 *** ***
In Ipsos Summer Song has been craned from her mooring and sits on the shore ready for her new engine transplant. Dave emailed me a photo this morning: 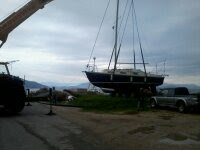 Hi Simon all went well summer song out of the water...The bottom of your boat was very bad with weed, and there seems to be about ten coats of old anti-foul still on the boat from years past, and is very rough. This means it will take lots of power from the engine to drag along....two ways to sort...scrape off which will take a long time by hand. It is about 4mm thick, or you can shot blast it which takes it back to as new and smooth, the cost is about the same both ways but shot blast gives a better finish the cost is about €xxx. regards Dave

Dear Dave. I’ve had another coffee and more thought about work on Summer Song. Let’s be sure to get the new/recon engine into her first before spending any more money, just in case anything goes wrong and the dear boat ends up as scrap. That’s critical. Can you ask M to have a look at the bottom? The reason is that I recall Summer Song’s bottom being sanded at Vangeli in 2007 and it looked pretty good after a power wash. I expect a heap of weed and barnacles but not so clear about those 'layers of paint'. I'm thinking about applying my own energies (labour of love) with help from you to scraping the hull when we arrive, assisted no doubt by copious rain. If sand blasting is still the best option then, so be it. I can watch the process. As you say there’s no massive hurry, even for the strake and hatches...leave them until I’m back. We have a good while before the season starts...Best Simon

Hi Simon. Have been down to see the boat and you are quite right to hold off on the removal of the antifoul by shot blasting...one of the things I want to discuss with you later...we had several power cuts through yesterday evening with huge storms through the night, speak to you later. Mark

...and this was the weather on the opposite side of the Straits of Taranto, 80 miles across the Adriatic from Albania and Corfu...


Taranto, Italy Wed Nov 28, 2012 1:58pm EST(Reuters) A violent storm hit the troubled ILVA steel plant in southern Italy, injuring dozens and adding to disruption at the huge site, which is already caught in a widening pollution scandal that could cost billions. The tornado rolled off the sea and hit the port city of Taranto on Wednesday, bringing down a chimney stack and damaging a warehouse and lighthouse at the factory's docks...Around 20 workers were injured out of a total of 38 people hurt in Taranto and divers searched for a worker who was unaccounted for after a dockside crane collapsed. Three others on the crane were rescued. The sudden storm, which television pictures showed filling the sky with a dark grey swirl of cloud that ripped across the harbor, was the latest blow to ILVA, which has become one of the most pressing issues confronting the government of Prime Minister Mario Monti. Europe's largest steel plant had already stopped production and faces the threat of permanent closure after magistrates this week seized semi-finished material and steel in a corruption investigation linked to the environmental scandal....

BRUSSELS, Nov 27 (Reuters) - Euro zone finance ministers and the International Monetary Fund clinched agreement on reducing Greece's debt on Monday in a breakthrough to release urgently needed loans to keep the near-bankrupt economy afloat. After 12 hours of talks at their third meeting in as many weeks, Greece's international lenders agreed on a package of measures to reduce Greek debt by €40 billion, cutting it to 124% of gross domestic product by 2020...