Trains to Inverness. I rose at 5.30am, finished my small packing and kissed Lin, setting her alarm for 9.30; set out with Oscar to catch a 16 bus from Handsworth to New Street. Birmingham's small city centre is going through another of its periodic transformations - this time to accommodate new tram routes. My normal bus route down Corporation Street to the station is now closed to all but pedestrians and cyclists.

"Where's my nearest stop for New Street Station" I asked the driver.
"Priory Queensway"
I prepared for a walk the length of Corporation Street. As we came into the city centre he changed his mind
"You're closest stop to New Street Station is by the Markets"
We got of the bus at Park Street, across the road from St Martin-in-the-Bullring. It's raining as I trundle my luggage, Oscar on his lead, up pedestrianised Edgbaston Street to the lift that rises to Queensway opposite the Birmingham Shopping Centre where there's another crossing. I'm getting tetchy. A private hire cab drives rather fast through a red light out of New Street Station and hoots me as I'm crossing. I stop and stare at him, making him brake. I give him a rude sign and yell "It's my right of way, you 'f*cking idiot" He replies in kind. I'm disgusted with Centro for claiming my walk from the new-nearest stop to New Street takes five minutes, and even more with myself for losing my temper over a matter deserving a wry smile of resignation, rather than my ridiculous pedestrian road rage taken out on an already frustrated taxi driver.
From 22 July 2012, with nothing but the most legalistic exercise in public consultation, every bus stop that a few days ago delivered passengers to and from New Street Station, has been removed. Most bus users wanting to go to Birmingham's central station now have a ten minute walk from their new nearest stop . The insult of this change - unheralded but for statutory small print - is compounded by the bland claim that the substitute bus stops are just '5 minutes' from New Street Station.
In political terms, pedestrians and bus users, unlike cyclists who have long constituted an educated population of skilled lobbyists (example 2 Aug - the widely reported response to Bradley Wiggins appearing to suggest cycle helmets be made 'legal'), don't rate in the calculation of Birmingham's transport planners. I - normally a member of an advantaged class get a whiff - when I travel by bus and on foot in the city - of what it means to be a social, and therefore, a political pooter.
The '5 minute walk' circle is almost certainly a paper exercise, a map-based calculation by people who drive cars with minimal experience - though they manage bus services - of relying on buses. I don't rely on them. For me they're a choice. My indignation is vicarious. I'm darned if I'm going to pay for taxis, especially as so many local drivers regard dogs as unclean and will not accept me as a fare with Oscar. Where normally I'd do this journey easily by bicycle, I'm off to the Highlands by train and don't need to take my bicycle with me. Centro, were I to complain, would show proof they they'd been through legal consultation with the public and aim to placate me by saying that in a few years I will be able to a tram that stops beside a refurbished New Street Station
"What about my dog?"
Dogs are prohibited from travelling on Centro trams. Unlike some countries our still quite sturdy class system is echoed in attitudes to transport. The position of the bicycle has shifted dramatically in under a generation - being increasingly the transport choice of politically influential travellers, while except among the nouveau riche and petrol-head fans of Jeremy Clarkson, the car is no longer a great object of desire. It's necessary for many people who can afford its expensive and highly conditional benefits. Buses remains primarily for 'poor people'; losers who can't afford a car or to pay for taxis. As a bus traveller - using my folding bicycle - I experience the low opinion held of bus passengers, from the drivers, from too many passengers ("what can you do, mate?") and in public and private discourse. I part blame Margaret Thatcher, or whoever it was made the notorious remark...


"A man who, beyond the age of 26, finds himself on a bus can count himself as a failure."*

*Wikipedia suggests this opinion originated either with Loelia Ponsonby, a wife of the 2nd Duke of Westminster, or the poet Brian Howard, one or both of whom said "Anybody seen in a bus over the age of 30 has been a failure in life".
*** ***
I'm calm. I'm listening to a radio serial on my computer, Oscar is lying  beneath my seat and there's plenty of room on the train and no-one's being annoying on a phone and I've bought myself a coffee and dipped into the picnic of smoked salmon sandwiches Lin made the night before.
Wolverhampton, Stafford, Crewe, Bolton, Preston, Lancaster, Oxenholme, Penrith - the grey green misty countryside rolls by affording landmarks I've seen no other way than from the train. My radio play over, I immerse myself in my current book Mani: Travels in the Southern Peloponnese by Patrick Leigh Fermor. 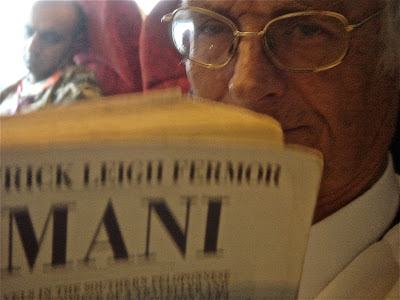 I am enjoying the book for its excursions from points across the Mani to all Greece and the world - on architecture and religion for a start. I'm marking chapters to revisit, in a book replete with reference and so evocative of landscape. I know he's describing Greece in the 1950s but he slows time, writing eruditely - and in so far as this might be necessary, convincingly - of the continuity of Greek history - especially in chapters 16 and 17. I enjoy deeply chapter 15 - Ikons. Leigh Fermor explores the Greek Orthodox church arming me with instructive words as an Inuit might recite words for snow - (I know it's a hoax) to enrich my understanding of white. The only other book of Leigh Fermor's I've read - over ten years ago - was A Time to Keep Silence. I liked his point about the impossibility, when it came to guidance on resisting temptation, of a dialogue between a psychiatrist and a theologian.


What, a psychiatrist may ask, are the results of the manhandling of the delicate machinery of the psyche which these struggles involve? Can so many human instincts be seized like a handful of snakes, tied up in a sack, and locked away, alive and squirming, for a lifetime? There seems no possibility of getting an answer.


The publishing trade slots this man as a travel writer. Silly really; like the people who refer to him by his first name - an error arising, I suspect, because tourists visit Kardamyli and hear villagers using the usual Christian name for neighbours - in his case 'ο Πάντι' - and assume an unwarranted address.
Next Carlisle, then we're in Scotland with further to go than my journey so far. Locherbie, then non-stop through the Lowlands to Glasgow Central, where rain continues. I walk Oscar a third of a mile along slate pavements to Queen Street Station where we've just half an hour to wait for a train to Inverness. Platform 3; another train with seats to spare. I'm in my book again as we pass through Stirling, Dunblane, Perth, Dunkeld and Birnham, Pitlochry, Blair Atholl, with no stop at Dalwhinnie above Drumochter nor at  Newtonmore; then Kingussie, Aviemore and at 3.23 into Inverness. Amy's waiting for us with Mum's car to drive back to Brin Croft, picking up some shopping at Inverness Retail Park. The sun's out.
After a hug and kisses for Mum, we are out again for a walk along the Moray Firth with Oliver and all the dogs - Bibi, Oscar, Cookey and Lulu

..and I'm allowed to push the pram and hold the baby, my dawn sourness drained; remote as the rain.

*** *** ***
To qualify for the £4000 grant we've won from Community Chest Funds 2012-13 Handsworth Helping Hands has been asked by the city officer checking the bids - Yvonne Wager, Neighbourhood Development Co-ordinator - to answer three questions. In discussion with other members of our committee I've replied:


Dear Yvonne. Many thanks for your letter seeking answers to three questions - or rather two and an assurance. After consultation with members of our committee here are our answers to supplement Handsworth Helping Hands' Community Chest Application.

1) With regards to equality impacts how is the assessment going to be made about who is vulnerable or is of limited means?
Handsworth Helping Hands (HHH) will:
(a) seek assistance from agencies who work with the vulnerable and/or low-income households, or who are likely to come across them in the course of their activities. e.g. social services, charities, police, housing associations, faith groups and…
(b) take referrals from local people who have neighbours or family members in need of help and…
(c) respond to personal requests for help.
In cases (b) and (c), evidence (e.g. medical information, proof of receipt of low income-related benefits, etc.) will be required to qualify for free or reduced-cost work. Our work for individuals and groups will be monitored to ensure that whether they are paying, part-paying or not paying, we are serving a cross-section of the community. HHH will maintain a case-by-case record of activities - date, location, costs and where appropriate, income and permitted personal details - to test and demonstrate our commitment to equality, while respecting the confidentiality of those we help. In addition HHH will seek demographic profiles of the populations in the area in which we work so that our approach as well as being judged on local knowledge and word of mouth, is informed by statistically reliable information about the area’s diversity.

2) How has the Health and Safety aspects of the project been assessed  i.e. risks to any paid employees or volunteers working in the gardens or inside homes?
General risk assessment for each type of job will be in place, and has been applied to jobs already done. These will be adjusted to serve the needs for each individual job, as necessary. Full employer’s and public liability insurance are in place for HHH. Training will be provided in the use of hand tools, portable power tools and ladders. Anyone employed or volunteering with HHH will be required to undergo similar training or provide evidence that they are already trained to a level covered by our liability insurance.

3) The proposal form indicates in the revenue section that some money will be going towards salaries. If this is the case I need an assurance that there will be the appropriate police checks made as they will be working with vulnerable people.
Anyone employed by HHH and likely to come into contact with vulnerable adults, young persons or children will be required to hold an appropriate current Criminal Records Bureau (CRB) check. (Appropriate CRB - i.e. a driving conviction for speeding would not affect their suitability for working with vulnerable people, whereas a conviction for theft or a sex offence would). As far as possible, people employed by HHH will live in the local area and be recruited through personal recommendation. At the same time recruitment and subsequent monitoring procedures will be rigorous. We have studied advisory research on recruitment and employment of paid and volunteer workers likely to be in contact with vulnerable people. Summarised, we understand, as well as CRB checks, the importance of getting at least two good references – ideally professional (e.g. for an electrician, another electrician etc) and personal; of interviewing as condition of recruitment by at least two people; of supervising the work of the volunteer or paid employee; appraising them and their work; getting user and fellow volunteer feedback on their work with HHH.