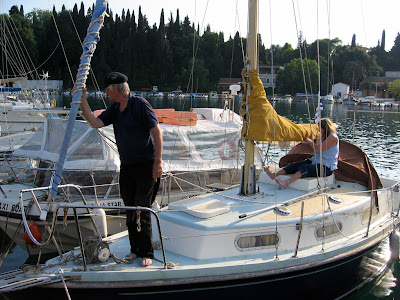 There's just a chance that before Easter 2013, which in Greece is on 5 May, far later than the Latin, we shall be able to sail in Summersong, courtesy of the safety given by a reliable replacement engine. This old 27 foot sloop registered in Poole, moulded in fibreglass at Thames Marine at Canvey Island in Essex in the mid 1970s, is moored, bow to mole in the tideless Mediterranean style, in the small harbour at Ipsos was the occasion for this weblog, and the reason we've been going to and fro between Corfu and England the last 5 years. I bought the boat almost on a whim on eBay because, through an oddity of European grants to the Greek fishing industry, she was on a free mooring - something trickier to find these days than a boat.
We don't know how Summersong got to the south coast of Spain in the late 1980s. We do know that there a railwayman called Norman Sheriff took an early retirement from British Rail and with his wife Pauline bought the boat in Spain and began an adventure. Norman died last year in Corfu, and I've had passing words with his widow sat with a friend and a blanket over her knees in the club room at Gouvia Marina. They spent twelve years working their way in Summersong along the northern coast of the Mediterranean - an odyssey in which they passed the great capes and headlands through the Tyrrhenian, Adriatic, Ionian and Aegean seas as far as Turkey before settling to live on Summersong in Ipsos, Corfu, moving, as age caught up with them to a small flower decked bungalow in Temploni in the centre of the island. It was an an adventure with an ending Dickens might have created which they wrote themselves.
I went a long way in small boats once - the Solent, the Bristol Channel, the English Channel, the rocky coast of Brittany, the Bay of Biscay, the rias of northern Spain, the canals and rivers of France, the Atlantic trades, the Caribbean and then stopped and almost forgot about the sea but for being a punter on big ferries, with a research sojourn on oil tankers. I've not been to sea in a sailing boat for nearly 40 years.
When the prospect arrived... when I had time to start again - I knew, quite swiftly, there's no fool like an old fool while the sea, unlike me, doesn't age.
I returned as a result of research, looking for the boat designed in the late 1930s by my sailing mentor of the 1960s, Denys Rayner. As a young RNVR officer keen on having a sailing boat for himself he'd designed a small sturdy gaff sloop which he sailed out of the Mersea before the war in which he fought. I found Robinetta in rude health in the hands of her owner Mike Garnham who kept her at Shotley on the East Coast. He let me go out with him, take the tiller... 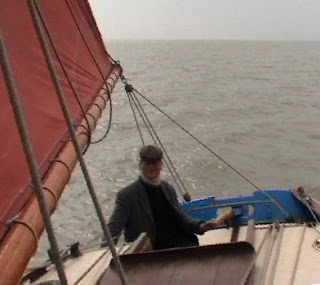 It was nothing if not bizarre. I was always clumpy on a boat, awkward in balance, not adroit. Age made me more ungainly. I try to make up for it with care for myself and others at sea, a strict conscientious about where to place hands and feet when leaning at angles and rocking about. Dreams since infancy sustain me. 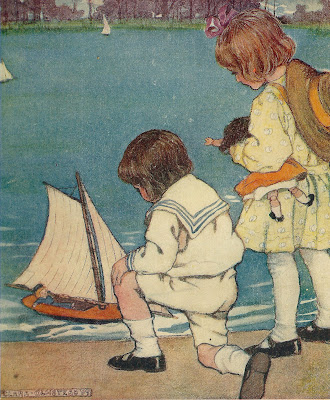 There's no seafaring in my family. I remember seeing model boats sailed by the Round Pond in Kensington Gardens. I've a small scar on the inside of my right knee which was made by accidentally cutting it with the tin keel of a toy sailing boat that my dad bought me when he and mum went for a day trip to Scarborough from where he was stationed at York in 1944, getting ready for Normandy. How did that happen? Scar? Scarborough?

I mean how did I cut my knee with the keel of a toy boat? I distinctly remember the cut. Looking at it as I sat on a bed in a seaview hotel room to have it tended. No more. I asked my mother if she remembered
"I remember you took your wellingtons off in the hotel room and emptied seawater and sand on the floor"
"But the cut on my knee?"
It's gone, perhaps never remembered. Infant minds make firm unconscious choices about which bits to keep forever; what to bin. The data on that event has been quite deleted in favour of the enduring scar and the recollection of a little gaff sloop. 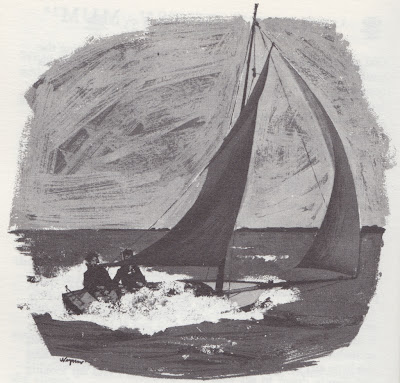 There have always been these moments of thinking about boats and sea, pictures, paintings and photographs even living as far inland as England allows. Our first tentative outings in Summersong didn't bode especially well. I lost my spectacles before even setting sail as I fiddled with a flapping jib while the boat was moored in the harbour, jumped in after them and destroyed the mobile phone in my pocket. We used her for hops up and down the coast to Agni for food at tavernas, to Lazaretto for a picnic - opportunity for idyllic snaps. Once we made it over to the mainland - to Sayada for shrimps, but yet again struggled against that evening westerly. In the sea of Corfu there's too much or too little wind and no tide to hinder and help a journey. 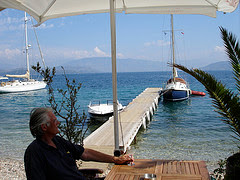 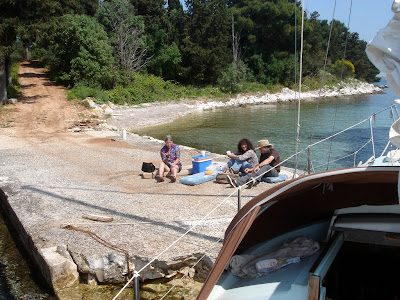 I knew, Lin knew; this was hardly the old days. These day we were mostly motoring to a jetty, hoping for a breeze, which when it comes has us engaged in near fruitless tacking against the afternoon katabatic - dead on the nose when we're trying to get home. The last time we've sailed her anywhere - the afternoon wind gusted gale force. Headway was near impossible. Summersong, with her noisy old engine full ahead, was getting caught in stays as we tacked back and forth between Dassia and Barbati, losing in leeway most of what we gained in progress. A sheet came unravelled, trailed in the sea and wound round the propellor - twice. Both times we got it undone, leaning hard, putting the prop in reverse. A fiasco.
"The figure of eight knot! I've never known one come undone."
"Well it did" said Lin indignantly, head of my court of enquiry
"If Alan hadn't been on board what would we have done?"
We got in after dark, the reverse on the engine wholly inadequate, so I bashed a couple of planks out of the jetty, getting moored. No excuses. So now I await a replacement engine for Summersong - something that can deliver 12 or 15 horsepower, compared to the paltry 4 left in the smoky old Yanmar Norman had nursed so well... 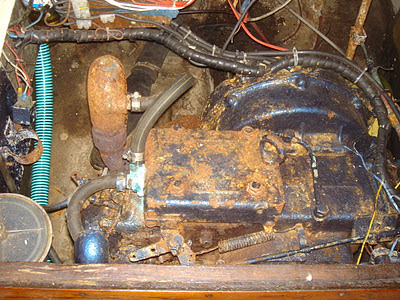 This spring after much searching, and a couple of disappointments, Paul and Mark found us reconditioned engine - exactly the one needed - for a fraction of what the cost would have been new.
"S'alright isn't it"
Meantime we've had the mast down, checked the gear up there and replaced all running rigging.

So. We'll try again shall we?
Posted by sibadd

Email ThisBlogThis!Share to TwitterShare to FacebookShare to Pinterest
Labels: Round Pond, Scarborough, Summersog