Whenever someone goes on about the notorious inner city area of Handsworth with its history of riots and crime I ponder this view from our balcony looking over towards the tower of St.Mary's Church and the trees of Handsworth Park, a quarter of a mile from the Villa Road. Urban pathology is an important area of academic study and no-one should down-play the injustice of unequal wealth but given the choice I've no wish to live anywhere else in the city than here - for the place and for the people who are our neighbours, known and unknown. 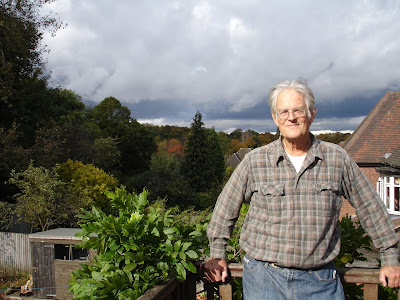 So it looks as if we could be selecting plots on the VJA by January or March. Betty, at Walsall Road Allotments, tells me this means missing planting things that ought to be going into the ground now to be ready for Spring. I replied to Martin Mullaney, the city Cabinet member with the allotments brief, who's trying to 'get to the bottom' of why the delay in delivering on the S106A continues - having been given an anodyne reply telling him nothing he and we didn't know.

Dear Councillor. Please find ... details of the ... S106 agreement (in) Lozells and East Handsworth ward.
Hamstead Road N/01514/03/FUL - Developer to construct a pavilion. Provision of affordable housing. £22,120 allotment money for the maintenance of 80 new allotment plots being constructed by the developer at the moment, with a view to commence letting in January 2010 - due on transfer of allotment land. £27,350 for the maintenance of public open space due on the transfer of the land.
No land has been transferred yet to BCC. £150,800 Handsworth Park sum. £25,000 Handsworth Park play area sum. These two sums plus indexation totalling £191,482 have been received. Of this, £183,828 has been drawn down re. spend incurred at Handsworth Park. Please contact me if you have any further queries. If you require any detailed information regarding the open space projects please conatct Andy Hogben. Regards, Robert Thatcher. S106 Projects Team 0121 303 3654

Dear Martin. Many thanks for this information. I’ve put it on my blog and circulated it to as many as I can. I rather doubt that Robert Thatcher will tell us more than we knew when the VJA application received permission back in 2004. I do not expect him to tell us why there’s been such a long delay in delivering the allotments and the playing fields and indeed the city acquiring the land. The questions that remains unanswered are – among others - what penalty clauses for non-fulfilment are there in the S106 Agreement and who has the power to enforce those penalty clauses if they exist? The problem of the continuing delay exists somewhere at a higher level in arrangements between Persimmon Homes, the City Council Planning Department and legal services in the Council. We're constantly being placated by assurances which we have little alternative but to accept. We had assurances in May 2008 that the new allotments on the VJA would be ready by that Summer (see image and accompanying text):
The developer had, at that time, assured the constituency planning officer, Alan Orr, that a ‘trigger point’ in terms of sale of properties, had been reached and the S106A should have been implemented shortly after. It was not. We could get nothing out of Alan Orr for several more months. That has been the pattern since. This year there were assurances of plots being available by late July/August 09. The City Allotments Department thought this was the case and, in good faith, circulated a newsletter to that effect.
By August it was obvious the allotments were delayed again – and so we were informally told by an officer from allotments section who shared our frustration. Alan Orr was ‘summoned’ by ward councillors to report to the Ward Committee. On 23 Sept ‘09 we got the latest news – kindly passed on by John Tyrrell from you – that plots were delayed but should be available in early 2010. Only our optimism gives credence to this assurance – given the history of promises broken by continued delays. Plotholders on existing allotments are planting for 2010. Those who applied for and were assured of plots on the new VJA will miss this opportunity even if the latest promises are honoured. We thank you for your persistence in this matter. Finding out the reasons for these delays is important but not as important of getting the new allotments and playing fields up and working for the community. Kindest regards, Simon

Dear Martin. Is there any similar movement on the cricket facilities? Previous query on the quality of advice being given regarding laying of the square and the building of the pavilion had largely gone unanswered. Updated information would be very much appreciated. Basil Hylton, Chair of Handsworth Cricket Club

Dear Martin. I’ve been pushing the allotments, but as background to Basil’s enquiry, the S106A of May 2004 included the following:
D. Planning Application No. N/01514/03/FUL – Victoria Jubilee Allotments ... approved under a Section 106 agreement to provide the following:
• Eighty new municipal allotments plus an index linked payment of £21,000 towards their maintenance.
• An index linked sum of £27,000 towards the maintenance of a play area and £25,000 in lieu of a second play area.
• An index linked sum of £15,000 towards the regeneration of neighbouring Handsworth Park.
• Two playing pitches and a cricket square plus a pavilion and car parking to the Council design.
• The inclusion of twenty four affordable homes.
Yours sincerely. Simon
Simon Baddeley
Handsworth Allotments Information Group (HAIG)
FOR INFORMATION ABOUT THE VICTORIA JUBILEE ALLOTMENTS AND TO GET ON THE SHORT LIST FOR A PLOT WHEN THEY BECOME AVAILABLE PHONE ADRIAN STAGG ON 0121 303 3038 allotments@birmingham.gov.uk
or complete the on-line form.
*I assume the difference between the sums I've quoted from 2004 and those just quoted by Robert Thatcher are to do with them being index-linked. I haven't done the calculations.

It's been almost exactly two years since I divorced my car. Of course I'd been cycling for work and play for much longer than that, mainly reliant on my folding bicycles, but on an impulse, I got out the old bike I haven't ridden for a good while. Been sitting in the garage. Having been riding one or another of my four 16" wheel Brompton folders with 6 gears for over a decade, I got a yen to try cycling with 21 gears and 24" wheels. This Eco Real (I can't even find it on the web) was my first proper bicycle. I'd always had bicycles - usually second-hand, costing anything between £10 and £50. Staying in the Highlands, I dropped into Halfords in Inverness. For fun they let me try out this bike, on sale in 1995 for over £400. I went mad. I cycled out of the shop and up the long hill of the A9 south from Inverness without a break - nothing to an experienced road cyclist, but for me, at 53, being able to do that seven mile journey back to my mother's house in Strathnairn with such ease and pace was a revelation about the difference between the bikes I'd ridden until then and one in a different class. People have asked me about the cost of a Brompton. When I tell them they often go "phew!" (to avoid that exclamation and give a bit of encouragement I do mention that they start at around £350). Ignorance about the cost difference between a high and low quality bicycle is widespread. I switched to a folder because I needed to go to lots of places by train and bus - what the transport planners call multi-mode travel, and I call versatile. Taking full sized bikes by public transport is difficult; often impossible in Britain. So I've put up with the lower hill climbing capacity of the Brompton to be able to combine cycling with long distance travel for work and play. I cycled in and out of town this afternoon on the Eco Real and got no small pleasure out of the extra turn of speed I got, but - oops - it's a lot harder getting my leg over the saddle when dismounting. On the other hand cycling with toeclips is a renewed pleasure. But I need to do a bit of tuning yet and of course, because I can't take it into places with me like the folder, I'll have to go back to using a lock. I doubt it'll replace the Brompton, but it was fun. I caught Amy in town directing traffic and she sent me to the grocers to get her some toffees. 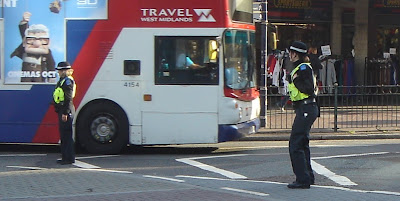 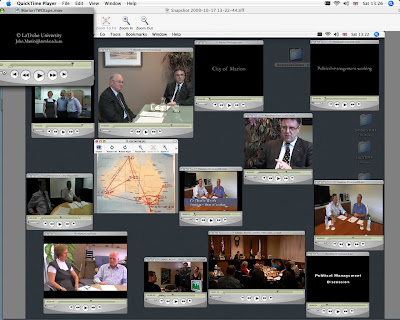 I'm really pleased with the way the Oz clips are coming along plus extracts from fictional films that feature political-management relations. This is not just a matter of having film but of compressing all the films needed so they can be displayed on screen ready for swift use in discussion. In addition we hope to get permission to webstream extracts from films Annie and John and Barb have made in the last few month via Democracy Street - as with the UK films of political-management conversations. This looks to be our coming itinerary. 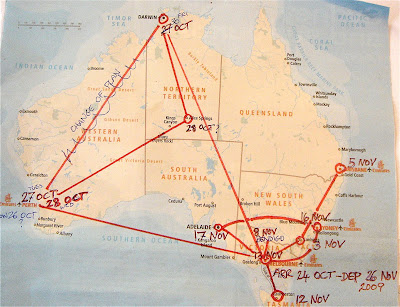