Some pictures’ titles are obvious. ‘The arrival of The Emperor Cattobaz with his retinue at Telepontus’ and there’s a grand set piece oil painting, part souvenir, part measure of the artist’s talent, part landscape, part suitable decoration for a national museum. Then there’s a surrealist pictures with the same title and the subject will be consciously disconnected from an reference to any word in the title and the painting will comprise some striking collection of incomprehensibly juxtaposed objects mined from the terra incognita of the subconscious – yours and the artist’s. There will be perspective and colour to entice the curious and bewildered eye, hinting at the possibility of meaning and teasing the libido. Most perfect of these is ‘The Bride stripped bare by her bachelors’. Or there’s a title for the curator that you suspect the artist would rather omit, but since you insist, it’s called ‘Sequence 1’. If the painting depicts something I recognise then I can guess there will be a series and I can guess at a figurative sequence. If it’s abstract I have to lie back and think of colour, shade and shape. People think this sort of painting is easy, until they try painting a canvas that covers a church sized wall in shades of variegated cerise. Perhaps the artist or their patron will call it ‘chapel’ or ‘frieze’. It helps me even as I suspect I’m not supposed to need a hint. The picture is offered for me and others to make of it what we will. Some are made indignant by the freedom feeling taunted by a ballot box without papers offered on a day without election. Some see a box with a slot in the top into which one my slip an anonymous vote as a mark of respect for what ought to go on between humans. Dictators, unless tempted by the market value raised in the democracies they distrust, do not like paintings whose title’s are not agreeably and unarguably linked to their subject matter. Say nay pas oon peep. Are you taking the piss? Are you looking at me? Recruit a crowd by burning it in public. Throw their ballot papers on the same pyre. Ensure our court photographer is there. ‘The burning of decadent art in the interests of the people on (date) at (venue).’

* * *
No builders came on Friday. At dawn it rained for a good hour. The morning skies were grey, the land steaming. All day we worked on the house. Lin painted but also started on the rockery in the garden. I carried stones for her. We cleared weeds from the garden. Moved more odds and ends into the roof of the Apothiki. Lin did washing and hung it out. I brought it in at dusk. Lin painted on. I barrowed a pile of tiles left by our builders and piled them against the Apothiki wall, and manhandled 22 sacks of debris closer to the road so we could dispose of them properly next day. Earlier I bought some tools and more paint at Dassia and dropped in to Ipsos to check ‘Summer Song’. I put up the spray hood, ran the engine for a bit and raised flags to let D. who’s been keeping an eye on our boat, that we were around. We are more resigned to the slow pace of work on the house.

Friday 7 Sept: Long before light on Friday I dreamt I was very rude to a rather important imaginary superior and woke in dark silence, Lin stirring in deep sleep. I had just arrived at a new organisation, saw a staff circular inviting comment on some aspect of policy and so signed up to have a word with the boss whose signature was on it. A small dapper man entered the staff area and circulated, eventually to me. He’d noted my signature on his circular. ‘So, how can I help?’ he said. ‘It seemed like a good way of meeting you’ I said with a pleasant smile. ‘Well now you have’ he said and headed for the door. I chased after him and sprayed the remains of my tea on him saying in venomous sotto voce ‘You fucking little prat!’ and worse - every consonant precisely emphasised. He looked at me astounded and then walked off. I wondered why I had effectively abandoned my new job. I pondered swearing I’d never said such a thing, wanting insanely to justify my behaviour and grew cravenly apprehensive at how everyone else would view such choler. I woke with relief astonished – my first dream in this house. Speaking to the ghost of Norbert Elias, of whom it would be impossible to imagine such incivility let alone mine I’d interpret this dream as a recognition of barbarism within, a live volcano of which this was a mere tremor, but even waking I am certain that my opinion of my imaginary superior was correct. The problems of the world come down to bad manners.

At 7.30 on Thursday morning came a shower for ten minutes. The dawn landscape steamed and freshened. A church bell pealed in welcome. Swallows swooped overhead. A scooter puttered invisibly through the tree cover. I was glad the blackened area behind our house was being damped. Yesterday Katherina, the Leftheris and Lulu’s grandmother were tidying there, collecting wood. Kiria Leftheris said the land belongs to a man from Corfu city. Lulu’s grandmother indicated, a sleeping gesture, that the fire had broken out about 2.00 in the morning last week. She thought the old twisted tree on the land would live, though badly scorched, its upper leaves and branches shrivelled. At its roots greenery is coming through the soil. I collected a plastic bag of plastic bottles and other litter and found four sealed bottles of wine half embedded in the ground. G said later ‘that one is vinegar, but try opening that one and let it stand. If it doesn’t fizz it should be drinkeable.’ I heard a man had put out flames on the mainland with wine. Maybe I should send these bottles to him.

Later while Lin painted I went with G to the wood yard he’d found at Kalafationi on the Viros road, an hour’s journey south involving threading Corfu town’s heavy traffic to a yard piled high with the cypress wanted for the floor. G’s Greek helped with the order but I was stuck by a demand for my tax number, not having it to hand. I phoned the property agent who said our file was now with the notary, we not being on their books any more. A. at the office would try and get it. A conversation on my phone between the wood yard manager and the agent and we were allowed on our way, the invoice incomplete. The authorities are rightly trying to track the movement of wood. I should have had the number to hand.

Later I continued with Lin tidying. We tidied some of the lathes and debris in the apothiki so that the doors opened and I could take stones to help make a rockery at the end of the garden. I cut back shoots from the lemon tree to help a few main ones grow better. Lin thought I’d cut away too many. We argued. From the upper floor the sea is darkened to the bluest of blues by the afternoon wind and in lucent air we can see the cumulus piles over the mainland on a view of the coast that stretches from the Albanian Cape Stilit, about 9 miles away across hardly 5 miles of water directly east until beyond Cape Gourouni south of Igoumenitsa it disappears towards Preveza behind the nearby higher ground at Anilipsi inland from Ipsos. From the balcony we can see Vidho Island between a gap in the local hills.

On Wednesday evening, over supper, we looked at Imray’s North Ionian Chart designed by Rod Heikell and linked to his Greek Waters Pilot, planning a short voyage in the Corfu Sea during our last fortnight here, sailing across from Ipsos to the hardly inhabited inlet of Ftelias in Greece but just under the Albanian border (p.56 in the Pilot Book), or perhaps Pagania with its promising shelter (p.56/57), then on to inhabited Sayiadha (p.57/58), where the strip of Greece that ribbons up the coast widens and the harbour can be entered if not too crowded. From there we could sail on about 15 miles towards Igoumenitsa but turn into Ormos Valtou, Igoumenitsa Creek, where the pilot shows a sheltered cove before the fish farm at the head of the creek (p.58). There is always a straightforward route back to Corfu but we could go on down to the harbour at Platarias (p.59) – popular with yachts but perhaps quiet enough for a berth in late September. From there we could go on, either to Mourtos among the Sivota Islands, to the harbour at Mourtos (p.60) (possibly incomplete) and the anchorage off Mourtos in Middle Bay (p.61), an adjacent cove. Then or earlier we could cross back to Corfu, possibly to the harbour at Levkimmi (p.50/51) (also called Kavos), or round Cape Levkimmis to Petriti (p.50), crowded but possible to anchor. Seven miles further north, past Boukari (we are now going against the prevailing wind) is the new marina at Benitses (p.49), after which comes Corfu Town (p.47/49) where we could try Mandraki under the old fort (p.48) if there’s room and we can pay, or we could try the old harbour, but be careful which end and will it be too crowded (I need to check this when in town). After that it’s home to Ipsos, though there’s an option of anchoring off Vido Island (what about Gouvinon island?). One question I have is whether it would be more interesting to make this round voyage in reverse, working south on Corfu and north on the mainland, crossing to Ipsos from Ftelias or nearby? I guess we can go south any route if the northerly wind prevails and, if going to windward I guess we’d prefer the calmer offshore version that we should get on the Corfu side. Clockwise makes sense but what about bolt-holes. 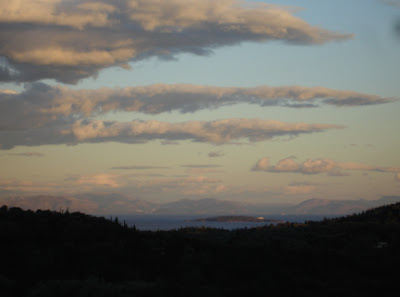 Thursday 5 Sept. 208 Democracy Street: While Lin painted and M. worked on the upstairs room I went to Corfu to pay for the car. Kostas beckoned me to a rare parking space outside his business by the old port and sent his son out for skirtos. A shared smoke and banter over these delectable little pots of bitterness softened the pain of parting with money. I embarrassed him first by conveying my regrets for the fire disaster, then we spoke of war, crime and human stupidity and the crazy badness of the world. ‘Things’ I assured him ‘ will only get worse!’ He delightedly agreed. ‘Yes indeed, everything will get worse’. ‘But’ I said ‘if you read your great historian Thucydides, things were always getting worse.’ I expanded my arms to demonstrate everlasting worseness. ‘Yes, Mr Simon, you say such good things! When you come next time you will come to meet my family. Is your wife with you? Here.’ He gave me a plastic bag of prickly pears, expertly flaying one and handing me a juicy core to sample.
Posted by sibadd