Wednesday at 208 Democracy Street: I wake before 6.00 which is just before 8 here. This morning is grey and even damp from a short rain (predicted even last Saturday) while we slept, brought, as usual, by a rare southerly breeze.

Most bad things in Greece come from the north (totalitarians and the m*lt*mi with its moaning delivery of suicide and household mayhem) but the issue in Greek foreign policy since WW2 has been an island to the south east. The British relinquished their governing role in 1959, satisfied to an agreement that gave them a military base in Cyprus and bars for our lads. Tension between Cypriots, locked in their children’s history books, and stands by Greek and Turkish governments in defence of their own, as this is understood, on the island and on the two mainlands, has stymied reliable peace. Memory of the feud – great acts of chopping and shooting between villages – has made old men and women weary of the fervent young, so ready, if licensed by their elders, to set upon each other, in uniform for their state or as bandits for their friends. Internal politics in Turkey and Greece are swayed by great men’s views on ‘the problem of Cyprus’. Some young mainland Greeks scorn the trouble bringers – ‘Cypriots, ttch!’ The Aegean pot is stirred by the great powers protecting our ultimate driver. A river intractable runs through it from the Middle East. Until our economies eschew carbon and we live instead on the bounty of sun and the wind we live under the satrapy of oil.

And now comes more sweet rain. When we go to the cottage people say “you’ve brought the rain” with reproach, but in Korakiana it’s only a blessing and we must hope for more.

* * *
Tuesday 4 September at 208 Democracy Street
The train journey to Gatwick and the flight passed most of Monday. We arrived at Corfu in the night. Kostas’ son met us with the hire car. We drove to Ipsos and dropped in on the café there for an indoor smoke and a drink. V was just tidying up to go home. Dg sat at the counter as he had when we left and J pointed to the collection box for the victims of fire mentioning ‘one boy they bought in with firelighters – 65 years!’. We wandered across the road and drove up the jetty to see ‘Summer Song’ lying quietly at her mooring. Amplified sound came from the strip but most places seemed lightly patronised, except where a coach party milled in one long bar.

At Ano Korakiana, at one in the morning, Lin dropped me off with the luggage and parked further up the village. I found the keys in their place. The house held the day’s heat. I surrendered to the air conditioner. There was building dust and detritus everywhere and much incomplete, but the upstairs room with its divider out is a great improvement. The replaced window stood wide open to the cooler night and a moonlit view of the sea and hills and a landscape dotted with too many lights. I made us tea and coffee. Lin wiped surfaces. I was glad we’d anticipated there’d be ‘a few things to be done’.

I woke just before 8. Wandering to the balcony I shade my eyes, gazing only momentarily to the east, where the sun has already turned the view to dazzling monotones, assailing the house through windows left unshuttered by the previous builder, leaking through the ones that are protected. The clock ticks in the kitchen. Lin sleeps. I make myself a cup of tea bracing for the heat, wondering what to wear. M. texted he was coming round with G. They sat over coffee and tea, new bread and honey, I’d got from the shop. 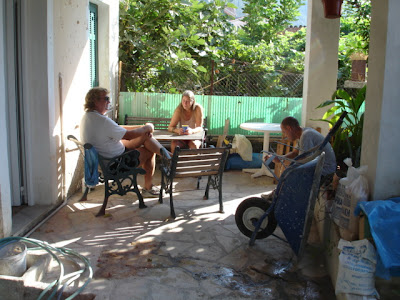 Lin paid part of what we owed for work to date. M. will come tomorrow to try and finish more of the top room. Gossip about the island. Police heavies from the mainland have visited to enforce laws on things like bad driving and parking habits and not wearing helmets on motorbikes. Local police not wanting to stir things with fellow islanders treated many infractions as customary, and tolerance on such things has long been part of tourism, but the state is putting its foot down to avoid paying more fines to the EU, whose Regional Structure Fund has benefited Greece since she joined. Brussels is now saying ‘what’ve you been doing with all the cash you’ve had from our shared pot? Didn’t you know when you dipped into it that there were conditions? Where’s the structure? Rule of law? Regulatory frameworks? Your borders have had the protection you get from full membership of the union. The Euro emphasises that, making a mockery of neuroses, once justified, about the ‘Macedonian Question’. Do you seriously think the place under the conditional name FYROM is going to invade, invest Thessalonika and march on Athens? Grow up. Stop the corruption. End the pervasive clientelism that blights your democracy. Stop the seedy relaxed attitude to the rule of law!’ Of course I wouldn’t countenance such views’ being too used to what pots tell kettles.

Evening of Tuesday 4 Sept: The house, although we’ve not wanted at first to admit it to ourselves, is more of a mess than we’d expected. The Apothiki is a fish skeleton of nailed lengths of wood, lathes and debris from the upstairs building work. ‘Who would have known the old wall to have so much rubble in it?’ There ‘s a pile of broken tiles and odds and ends on the balcony. Furniture wears a fine dust from the sanded floor, which is incomplete, as are the walls with wires loose and rough surfaces. Builders’ odds and ends have been plonked down all over. The garden looks more of a mess than when it was rubble. To top this there’s been a fire in the land below our house that was once overgrown. From the balcony you can see a couple of dead trees, others badly scorched. Mrs Leftheris greeted us and shook her head at the devastation.

To add to our chagrin I was stung by a wasp and trod on a nail. Blood dripped on the path until Lin found a pad for my heel. The wasp must have been weary so I didn’t go into antiepileptic shock as I did once. We tidied and tidied. Now there’s a pleasant waft of salad in preparation, plus fresh bread, and wine. Supper of tzadziki, ham, salad of tomatoes, onions, peppers and feta, with a chilled retsina. Lin wondered if there was some music and I dug out on my laptop some of the lute music from Iraq that Dhiaa has sent me when I asked him about his favourites, interspersed with songs from Miki Theodoraki’s setting for Axion Esti – near East mingling with Middle East. It’s strangely moving to hear these sung in German given their context.

J said ‘business has been shite’ this summer. G. said middle Europeans – Croats and others from Yugoslavia come to Corfu with their food and drink in their baggage. ‘They stand outside bars chatting and dancing and drinking. enjoying the lights and music but not spending any money. They even bring their own water!’
Posted by sibadd