Monday 10 Sept. A hot day with a local morning breeze. My aches are moderating from all the messing about yesterday. My phone is still drying but we shifted my SIM to Lin’s so I got a call at noon as we tidied, that B. would be coming up to do our electrics and M. tomorrow to plaster. Lin in her nightie is spooning out rubble from around the electric wiring beneath the floorboards. The power’s off. I court martialled myself to her about the silly mistakes on the boat on Sunday. Our friends will be here from England in the afternoon.

The cat, Bubble, has found us again but not its companion Squeak. Bubble is older and has a cough and seems altogether in poor form. She pleads. Lin gives her food. One, a chop from supper yesterday is too hard for the cat. Lin chews it smaller and places the macerated meat on a plastic plate where they are welcomed.

How one becomes acquainted with dust when sweeping it up! How one notices the ground. Kostas spoke of the need to dig the earth and grow vegetables. We'd recalled the giant whom Heracles defeated by lifting him from the ground - the source of his strength. What was his name - Antaeus? Yes.

The use of association. Take these just now lathe-nail-crucifixion, dust-death – these are easy. Suitable for cryptic crosswords. They call on memory only. To dig deeper you have to jump on other things – which could be an assonance, a nonsence sound, an idea, an object, even a sound or smell. You don’t know whether what you’ve got is a wriggling thing or junk. The wriggling things have seen me first and I don’t know it. You have to fall asleep and then wake in a dream and think - stealthily.

Lin called while I was in the garden. ‘Come and look at this creature’. It was in her bucket wading on the surface tension of the water. A delicate slender striped multi-legged creature about an inch long with antennae fanned out ahead like something from the sea. She edged it gently into our garden. We are dusty but the house, though very incomplete, is looking much cleaner.

Sunday 9 Sept. A brief round of bells this morning. We wake just before 9.00am having not slept until 3.00. Eight miles away a northerly breeze dissects the sun’s reflection on the sea apportioning light to Epirus and Kerkyra. ‘Can we have some music?’ says Lin. I turn on music on the laptop, the Leipziger choir is singing Theodorakis’ folksong. ‘A solitary swallow’ - Ena to helidoni - from the Axion Esti.

Starting with parts, we’re getting, as we work, to know the Axion Este, set to the music of Theodorakis and parts of Elytis’ epic poem,

which I have in English. I got to like the rebetica pieces, other parts grow as we get a sense of the whole – Genesis, Passion – in which the poet writes of a merciless struggle against the others – ‘it cannot be they without you nor can it be you without them… and you must face them without fail…those who wear the black shirt’ and others who ‘speak the language of porcupines’, raw-eaters, water-brutes, bread-fearers, the leadenfaced and the neocondors. The lead singer’s lines are repeated by him and the choir, the tune ratcheted up a key in a familiar heart churn even a musical idiot like me can grasp:

The same echoed, and then the chorus, back to the earlier key:

A morning service for secularists enjoying peace. Here's A solitary swallow sung in 2001 by Mario Frangoulis and the same sung by Grigoris Bithikotsis with Theodorakis conducting in 1977. Keeley’s notes say the ‘master builder’ is not God but an architect from a folktale who built a bridge at Arta over the river Aracthos in Epirus - where Gianni Moralis was born incidentally. 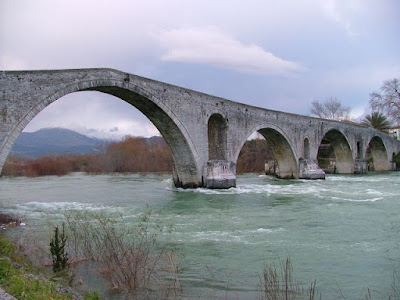 As is well known bridges, because they cross water, must have a sacrifice. He buries his wife alive inside its structure. Nowadays, in our disenchanted world, EU law would forbid this, but in some accident a beloved companion will slip on the wet marble of their new pool and be drinking through a straw for life – like the bold young motorcyclists in Corfu’s mental hospitals who did one wheelie too many or swerved into an olive trunk wearing no helmet.

* * *
Now mid-morning we wash before driving to the Sunday sale at Kontokali. Yesterday afternoon as we swept the path beside the house Kiria Leftheris brought a plate of sweetmeats made by her mother, telling us the name to make it right and I can’t remember – sweet crispy baked and tasty with honey.

The sale at Kontokali was not on so we drove west to Agios Ioannis. L and M sat with us over coffee for a couple of hours and added to the Sunday conversation in the square. While Lin looked at the stalls three of us with a combined age of 201 discussed the young – which is where I heard about the brain damaged in asylums, as we discussed the pros and cons of the rule of law at a table in the Platea at Agios Ioannis. We got on to Corfiot opinion about the UK and their indignation at our help for the Muslims in Yugoslavia, who they associated with the collaborationist Chetniks who had hounded Serbs for the Nazis. Durrell,

years ago, wrote the British occupiers up to 1864 [Sir Frederick Adam, Lord High Commissioner of the Ionian Islands between 1824-32], when Corfu became part of independent mother Greece, regarded the locals as about 'as interesting as their stock' and the Corfiots regarded us - and other invaders - with contemptuous indifference. I doubt that all true. For the first commissioner, Maitland, yes - but a lot less for his successors. We brought good roads, ginger beer and cricket, and also there is a education and growth in trade. The Venetians brought the olives - a strategic incentive. 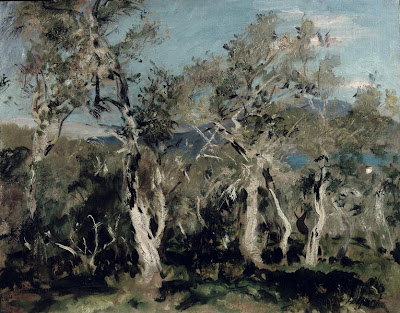 ‘Oh yes and we contributed to the military band element of the island’s music’ said L ‘ except they regard it as slightly beneath them to tune their instruments’. ‘Wait’ I said, ‘maybe if you’re poised between East and West “out of tune” hasn’t the same meaning as it does for us?’ L. thought about that.

‘In the meantime, tell me some Corfiot jokes’ I said. These were mined from conversation with denizens who circulate Greek versions of English self-deprecation – both a product of confidence in one’s good fortune to be born under one or other flag. ‘How do you tell the difference between Corfiot electrician and a Corfiot joiner?’ ‘It’s written on the side of their van’. Two Corfiots meet in a bar. ‘Have you heard any gossip?’ ‘No’ ‘Have you heard any rumours?’ ‘No’ ‘Then tell me some lies.’ God offered to grant an Englishman, a Frenchman and a Corfiot, who had lived good lives, their dearest wish. The Englishman asked for a small castle and a few acres; the Frenchman asked for a vineyard that produced good wine; the Corfiot said ‘the man next door has a cow that produces 25 litres of milk every day’ – pause - ‘Yes?’ said God. ‘Can you stop it?’ asked the Corfiot. That last one is especially sweet. It makes Corfu sound like the Forest of Dean. I found M was a fan of Grand Prix - for me tedium in agate - but his joy in the success of the young Black – he called him ‘coloured’ - racing driver who’s brought Britain back into Formula 1, was infectious. I find this is always the case with enthusiasm – when modestly inserted into chat. We all get our turn.

We went back via Ipsos where I started putting on Summer Song’s sails and ran into a series of mishaps of my own making. The main went on fine, except that as I was folding it down a batten dropped out and disappeared. I started bending on the self-reefing foresail, but the afternoon wind had risen. The sail fought back, sticking in its groove. The foot clipped my face and my glasses fell into a fathom of hazy water. I leapt in after them. Futile of course. I called to B., on the boat nearby, and he dived for them, at first fruitlessly until I pointed out, through a myopic haze, something glinting. Phew! Then I remembered my mobile was in my pocket. I dunked it in fresh water and it’s still drying along with a few euro notes. The chip is OK in Lin’s phone. She wandered along the mole and gasped in admiring disdain as I relayed my foolishness. She tried to help me get the jib on but again it jammed. I persisted when I should have abandoned my efforts, and put the halliard on the mast winch. Another gust around Trompetta and I dropped the winch handle in the drink. ‘That’s it’ she said ‘how am I going to trust you in this boat?’ I wondered too. Such stupidities can, at sea, become swift disasters. I dived unsuccessfully for the handle in the warm salty harbour, and found the batten. ‘Wait until the morning clears the water’ said my neighbour on his taxi boat. I tidied up. Put the jib below and dug out dry clothes.

Lin drove us home ‘I was so angry with you’ she said. I don’t blame her. Another mistake. I hadn’t brought the combined tools gadget that should be on my belt, and was using a wholly inadequate spanner on shackles. ‘We could have been back tidying the house’ said Lin as we drove home. Meantime she’d found two shelves in kavalla marble lying on the beach.

What have I learned apart from ‘there’s no fool like an old fool’? Think what I’m doing. I should have left the sails until the morning or got help. It would have been unfair to ask Lin. Last time we sailed together in 1976 I was in the boat I’d sailed single handed in many weathers with sails far easier to bend. I’d done the sail work leaving her occasionally steering and cooking. She and I are a lot less lithe and I’ve not taken Summer Song more than a few miles up the coast so far. (note – have spare winch handle and attach a little white float, tether my specs, don’t bend on sails in a wind gusting 4 from astern, think!)_
Posted by sibadd