‘This small world the great…study the insignificant in depth’

Wed 12 Sept: The words are from Elytis’ Genesis hymns at the start of The Axion Esti. Phone last night. Amy’s home. Richard’s well. Lin’s parents fine. Oscar good. George, I spoke to briefly, in Saffron Walden. He sent love from far away. M and family are here. It’s good to see them.

G. lent me a fine winch handle and said kindly to Lin. “Shit happens’. She looked rueful. I met Dave, at last, strolling from his van, my mentor and steward of our boat. ‘Ti kanis?’ ‘Cala!’ We gripped hands in the road. I need him to say ‘it doesn’t matter’ to Mrt. who is striving – oxymoronically – to relax from the incompetency he’s encountered in making his business so successful. Shoddiness and sloth are for Mrt. the source of evil. ‘So the market doesn’t always heal itself?’ I said unkindly.

Conversing on the balcony, or was it at AnnaLise Apartments where Mrt, Sdra and Adam were staying, Mrt described a client who’d insisted on a completely blank flat bare wall in a building – a feature indelibly inserted in the specification. Mrt. inspected the work. A contracted electrician had put a socket in its centre. S., wife and colleague in the business, looked at Mrt. solicitously as he began to simmer at this even in the telling of it over a meal in a pleasant restaurant at Ipsos.

He relayed another. ‘We were on site at a hospital with a dementia ward. To protect the old people we put up a sound proofing palisade around our work, but it meant relatives had to circuit a long route to visit. Our foreman constructed a safe covered bridge so they could go more directly. The hospital manager said ‘that crosses over my space, take it down now!’

Combine shoddiness with self-important stupidity and you see evil in its unspectacular banality, speaking ‘the language of porcupines’, the leadenfaced. Both of us seethed and S. worried about Mrt’s blood pressure. I told him about my last dream of insulting a bread-fearer, which was probably unhelpful. Young Adam distracted us with a conundrum about the impossibility of standing behind a tree ‘because being all round, it has no front, or back to stand behind’. This moved us on to the contrast between Archimedean, Newtonian and Einsteinian topology – the last being placeless, is in line with Adam’s proposition. “Yeah, well, if we were being shot at we’d be glad to get behind a tree damn fast!’ I said in Johnsonian refutation of what had seemed a feasible conceit. ‘Yeah but if the tree, you and the bullet were all traveling relative to each other at the speed of light…’ 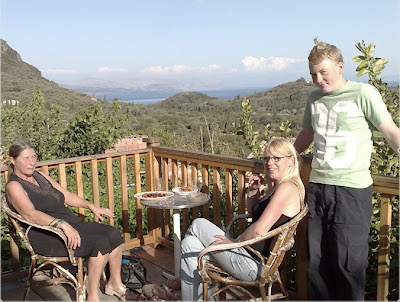 Lin drove us yesterday to near Gastouri south of the city to bargain for a bed, We were late and tetchy. All roads south pass through the traffic fracas of Corfu and signs are ambiguous. Negotiating the one way system to the west of the town centre the driver and passenger see a sign which says go straight on for Lefkimmi, Achillea and the airport. Getting closer there’s another sign showing a right turn to Pelikas. ‘Don’t we tell ourselves take that one. We then see two downward pointing and divergent arrows indicating a fork. ‘Ah ha’ we think, ‘the right hand one must be to Pelikas. Do not go right, take the left for the airport and beyond.’ As we turn left we glimpse nearly all the other traffic veering slightly to the right and scurrying down a previously invisible road which is the one we should have taken instead of the one to the left which heads into the city centre and which contains, of course, a long almost stationary queue all the way to San Rocco Square from which, because its one-way, is inescapable. After wasting time cursing the road designer, we found various weapons hidden about the car and started killing each other for not looking at the signs. Escaping several more minutes of silent antipathy and the devilish one-way system we made a rendezvous with the bedseller and after lying on it together became owners for €80 of a sturdy wooden ended king-size bed and mattress to collect later in the month.

* * *
On Monday evening, as wanted and as urged by Katerina, we pulled up the parquet patterned lino in the dining room and hall to see the unglazed tile floor below – geometric pattern of yellow, green and white involving lozenges, bands of yellow and green squares, pleasing to the eye. The same colours are revealed in the hall without the lozenges and in the washroom, showing, in the same colours, a larger green parallelogram surrounded by four yellow and white scalene triangles giving it a 3D effect like something from M.C.Esher. Noting that new grizzly grey tiles in the bathroom are a tile thickness higher than the hall ones, we conjecture a similar pattern beneath those, but having no immediate replacement will leave them for the moment. I scraped off the lino fixer and Lin mopped. Dampness trapped beneath the lino was gone by morning.

I took a cup of tea out on our balcony at 7.30 to watch the sunup. Cocks crowed. Cumulo-nimbus rose gigantically over the mainland, mist obscured the shoreline across the strait. Grey cloud covered Pantokrator behind the village, with skimpy outriders overhead. The sun was having nothing of this as I guessed from the forecast. Slower than my eye could detect but in the time it took to turn away to sip tea and read a paragraph the mist dissolved revealing the mainland, the cloud on the mountain was swept away, and, most amazing, the Everest pile of cotton wool over Epirus evaporated before the chatter of parents coaxing children to school at 8. By half-past, after some desultory conversations among houses and ringing of pails, Ano Korakiana was quiet with sounds from further away muted indoors. Already there’s heat haze off the land to the south.

At 11.00 I phoned M. ‘I’ll be up definitely tomorrow or Friday to do the guttering. B will be over as soon as possible to do your electrics and finish the floor.’ Lin did the washing and we shifted some lampshades. There are now some little oil paintings on the walls – a girl sewing, an elm tree in an English hedgerow under a grey sky (both familiar, from Mum’s home in Scotland), a scene of ruins in moonlight, a snowy lake with a castle in middle Europe.
Posted by sibadd

Email ThisBlogThis!Share to TwitterShare to FacebookShare to Pinterest
Labels: souce of evil