Delighted to find a free and instantly working WiFi connection at the Hotel de France in the centre of St Pol de Leon and so sat with laptop and coffee, a friendly dog and aimiable proprietor while Lin and her parents provision us at Leclercs.

There was har in the Channel. The ferry sounded her fog horn at the start of the seven hour crossing from Plymouth to Roscoff. Visibility improved but the cool drove us inside, where we had expensive snacks to a background of competing muzak. 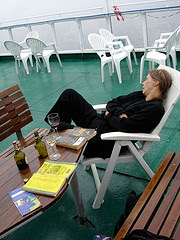 The gîte, just south of St Pol de Leon, is one of three attached to a farm of exemplary efficiency called Keronvel. Madame Moal accepted our €150 deposit ushering us into an attractive accommodation of surgical cleanliness approved by a category of consumer who’s taste for hygiene is formed by commercials for cleaners that eliminate dirt and hurt it in the process. 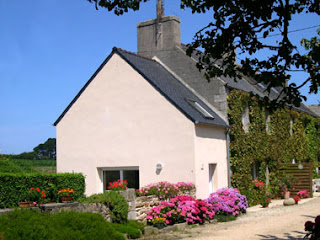 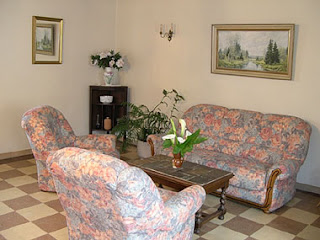 Gone are the forlorn roofs of a rural population driven by globalisation to the cities and its colleges. I’ve not noticed small bakeries and bars on their last legs. They’ve faded away. Shining cars are everywhere, their landing zones expansive aprons around supermarch hangers ringing marketless towns whose coiffured centrevilles have signs to direct the new harvest to places for the kids, for gazing and strolling in reach of parking. Old churches have a new liturgy- the guidebook. At Keronvel - power to their elbows - the farmers have outbuildings for the likes of us (stables, workshops, accommodation for long gone labourers, converted to gîtes for Sat-Sat hols) but they’ve also found ways, with state help, to up their yield to compete with the world, investing in spacey glasshouses, cultivating Stepford vegetables that meet the exactions of bigbox procurement aimed at meeting the demands of those same dirt fearing car born shoppers.

After driving to a couple of places we found a path to a brambled shrubby point east of Carentec where we could see islets, passing boats, birds and strollers on the edge of the Morlaix estuary. Here Arthur and Dorothy strolled gingerly down a slope to a small sitting place where we picnicked, chatted, and later read. I found a place to recline in the foggy sunlight of a humid afternoon, woken by the buzz of a jetski looping in the sea below – two young people filling the air with the noise of their fun, that silly stream of water shooting up from the back like boys competing to pee up a wall.
I’ve just finished Lawrence Durrell’s ‘Bitter Lemons’ between a more leisurely read of ‘Prospero’s Cell’. They make fascinating reading, but I’m glad I didn’t read Durrell on Corfu before we came. We weren’t guided there by his suite written before the second world war. Our Corfu was one we saw first in September 2006. One that we knew would have piled layers on earlier accounts. I was given Gerald Durrell’s ‘Corfu Trilogy’ by Amy for Christmas.

A thoughtful gift, but I decided it was a unreadable as the diary of a parent’s old lover – engendering a mix of disdain and jealousy. This is not Gerald Durrell’s fault. He’s an admirable human. I just don’t want to look to closely at what his Corfu has become, preferring to enjoy our affair without reminders of her past lovers and their pleasures. His brother I can read - now. Corfu, like Cyprus later, separated from him as he became focused on universals, while Gerald stayed involved until he died, sharing apprehensions about the ecological blight attending the great spread of equality in travel. Lawrence Durrell is seductive. ‘Somewhere between Calabria and Corfu the blue really begins.’ His first line on Corfu and the last in that first paragraph ‘Other countries may offer you discoveries in manner or lore or landscape; Greece offers you something harder – the discovery of yourself.’

I am slightly less interested in his landscapes (the same difficulty I have with Gerald – mine not the author’s) than in his reflections on Greeks – heroic, cowardly, impulsive, generous, intrigue-prone – and their complicated feelings towards the English, especially where intimate local bonds – family, love, friendships - were drawn into larger pots stirred by bigger spoons. On such things Lawrence Durrell - who would be odd if he were not something more more difficult than his writing - brings grief close to the surface now, because experienced before but written after, and published even later, they are pregnant with unexpressed emotion – ‘not conscious of separation’ ‘regret so luxurious and so deep that it did not stir the emotions at all’, ‘we never speak of it …’ he wrote in from Alexandria in the final chapter of ‘Prospero’s Cell’. This I suspect is the source of the keening unleashed to my startled impression at Cambridge, as I absorbed his Quartets from cover to cover and enjoyed in happy innocence the ravaged country, to which my post-war father - part stranger - introduced me with attentive love. I was told years later that Dad, the very model of an Englishman, caused amusement because he spoke such fluent 'mountain Greek'.

This delicate ground is being carefully sieved by Mark Mazower and his contributors. One of the names to whom the essays are dedicated is Mando Dalianis. Inside the collection is a chapter co-authored – apparently – by Dalianis and Mazower, ‘Children in Turmoil during the Civil War: Today’s Adults’. An endnote (p.104) records this chapter written by Mazower ‘based entirely on the published and unpublished work of the late Mando Dalianis.’ In July 1996, very ill, she’d delivered a monograph at Sussex University. In August Mazower visited her in Stockholm. Over a week they agreed to him bringing her work to wider notice. Dalianis’ life as a scholar - I’m sure she did many other things - began when ‘At five p.m. on Wednesday April 13, 1949, the heavy iron door of Averoff Prison was opened to admit me, and my name was added to the register of prisoner’s awaiting trial’. It was completed with the delivery of her paper 47 years later.

It is the greatest mark of character that an individual who inherits every reason to recycle their anger becomes someone through whom the evil men do is not passed on. Dalianis, a child and adolescent psychiatrist, followed the children and parents she encountered in prison for the rest of her life. She could easily have darkened her interpretation of what happened to these children imprisoned with their parents, then, as punishment to their mothers, fostered or sent to children’s homes. Never glossing the cruel consequences of the civil war and its worse aftermath, she concludes that recovery from trauma for most of the children was made possible through the occasional kindness of strangers, the conscientious nursing of extended families, the love of surviving parents, and the unprecedented opportunity that arose from Greece’s economic growth and urbanisation.

It is salutary for me to digest the fact that the sprawling ugliness that now blights Durrell’s exquisite landscapes has also meant ‘that in less than four decades, the animosities of the civil war had receded much further from the forefront of people’s minds and lives than anyone might have predicted at the time.’ (Mazower, op. cit. 104).

Such is the scholar Dalianis, whose good work was not with her bones interred. I’m grateful to Mazower for finding her. I would have liked to have been a witness to the collaborative week in 1996 that brought about this hopeful chapter – a tribute to all who, having cause to make war, make peace. [A detail: Dalianis wrote that the gate of Averoff ‘opened to admit me.’ Prisoners usually speak of gates that ‘closed behind me’?]
Posted by sibadd