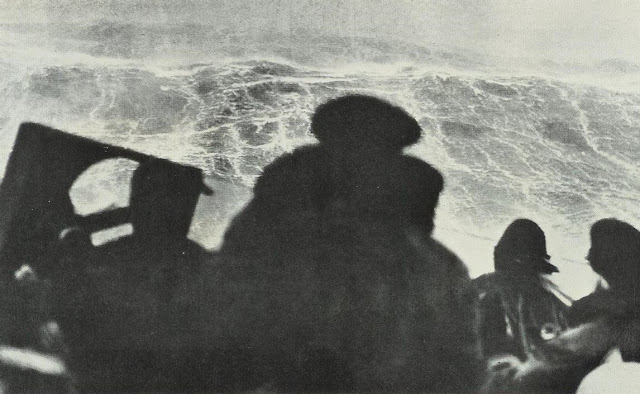 An image, from his book 'Escort', of my friend and mentor Denys Rayner who, with his companions, fought long ago, far from home and family, so we could enjoy peace through our lives. I spent a good bit of my spare time last year learning more about him. The memory of his unembarrassed impulsiveness prompted me to press the 'buy it now' button on my screen when 'Summer Song' came up for sale on the web.
Not a day passes without a thought of the European century from which I, with most of my generation, escaped - unlike Denys, and my parents, grandparents and great grandparents. Unlike them I've lived in peace for 62 years. Wars have been waged in other places. The hideous exceptions (Birmingham 1972, 7/7 for example) have come nowhere near the carnage on our roads - killing more people I know than war, creating shrines beside the roads of peaceable Corfu and flowers tied to railings here. Tutored in happiness, the most I feared as a baby was the mewing of mating cats on the thatch of Mill End (where I was born in 1942) and thunder around Bignall's Cottage, my great grandmother's home near the Itchen.

Thunder made Grandpa Henry draw into himself. They remind me only of being carried downstairs and cuddled in a cosy sitting room, rain beating on the windows. My France has been green and pleasant, not mud and ruins like his. My Atlantic was not the Western Approaches in winter aboard a warship, but running before the tradewinds in deep blue swells in a boat - Young Tiger - that Denys had designed for enjoying peace. “In any reasonable weather" he wrote "it is the diminutive size of the yacht which makes long passages under sail such thrilling affairs, and one of the reasons why I, for one, find the smallest possible craft the most rewarding”.

In 1899 Conrad wrote, through a narrator moored with his companions under the darkening skies of the Thames Estuary, about the monstrous European Kurtz. Some thought Conrad wrote about something that arose in Africa - but his 'Heart of Darkness' was here. What happened in Greece in the 1940s, says Mazower, was part of something that happened across Europe - a continental civil war. The plotting of the mighty was linked to atrocities and counter atrocities across the continent, scarring collective memory. [Mark Mazower (1998) Dark Continent: Europe's Twentieth Century]
* * *
Had lunch and a meeting on campus to plan a series of training events on leadership for scrutiny. Passed out small gifts from Corfu to colleagues. Set up a meeting to plan a virtual lecture series in Australia via the campus video conferencing facility. Met up with my friend Nick to do a podcast with a Sandwell councillor discussing possible futures for Black Patch Park and went to a meeting of our group - The Friends of Black Patch Park - at the Soho Foundry Pub from 7-9.
Posted by sibadd