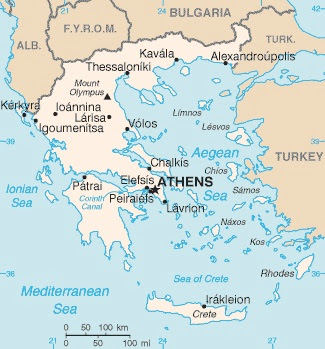 Democracy Street, Ano Korakiana Originally uploaded by Sibad.
DEMOCRACY STREET - the one we know - is in a village on Kerkyra or Corfu (Κέρκυρα), an island in the Ionian, close to the coast of Epirus, which includes Albania and the Greek mainland. The main town, which feels like a city, is also called Corfu. Ano (Upper) Korakiana - Ανω Κορακιανα - [Κόρακας means raven or crow] is in the widest part of the island on the slopes of the Troumpetta range - an hour's cycle ride, for me, from the port. Democracy Street runs through Ano Korakiana 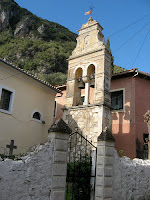 past the church of the Archangel Michael, past the Arestides Metallinos Museum, the school, a kafenion with views towards the mainland, the bandstand and the cluster of houses known as 'Little Venice' (for its architecture), turning north up a sinuous road past the small church of St.Isadoras, to Sokraki and over the mountains to the north coast.

Westward, Democracy Street passes three general stores and surgery to a hairpin bend that leads to choices - one road running eastward again, almost parallel to Democracy Street (linked to it via steep footpaths between tightly clustered houses) to Ayios Markos and the sea at Pyrgi and Ipsos joining a north-south road along the east coast, another southwards via Kato (lower) Korakiana to the capital, and another westward to the sea via Skripero to Paleokastritsa on the west coast or Sidari in the north west. * * * Small facts gleaned from the web - which keep reappearing and need checking: Ano Korakiana - Άνω Κορακιάνα - is 18 kilometers from Corfu Town, about 3 from Ayios Markos. Its population in 1991 (last census) was a little more than in 1981 at 1400 - which is not the village trend. It has an orchestra founded in 1958 and a musical tradition going back to 1623 with the foundation of the Mantolinatas of the Pope (for which I will need an explanation). Ano Korakiana has 37 churches - the most interesting, to Byzantine scholars, are Saint Nicholas, the Archangel Michael (next to 208) and Saint Athanasios. The local school, a few metres east of 208, contains a small folklore collection. We heard from our friends in AK it was at risk of closing and being replaced by a psychiatric unit (What's new?). It's the birth village of the Greek actress Rena Vlahopoulou who died in 2004 at 81. She is quoted saying "I catch the boat from Patras and as I board I say to myself, now I’m at peace. I’m on my way home to Korakiana, I’m going to see my things, those who are close to me. I feel that Corfu embraces me every time I arrive." How true and I'm not even Greek, let alone Corfiot. Villages are being transformed all over the world. AK is probably no exception when it comes to a sustained communal core amid the foreign settlers and semi-settlers. It's not a 'tourist' village yet. The kafenion is open only at exclusive times. There's no restaurant or shop selling things other than provisions for residents. Notices are in Greek. Music practice can be heard at various times and chat in various registers - from outbursts of maternal invective, steady conversations, greetings, laughter, TV soap dialogue, monotonous sports commentary and chirruping domestic banter interspersed with the clinking of hardware in sinks, the acoustic of gossip shifting, as it comes outside, for washing to be hung or garden worked. 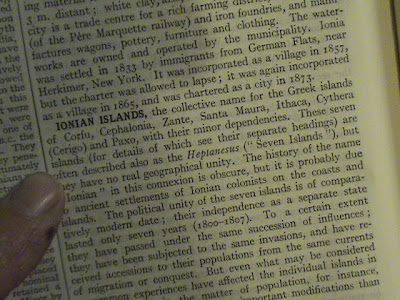