The march of time

Seven years ago in Spring, under Efi and Adonis’ walnut tree in their garden next door, my neighbour and friend Lefteris and I celebrated our 70th birthdays – he two months younger than I. It was a party of foreigners – mainly English plus my old American friend Tony, staying with us a week– and Greeks, neighbours in Ano Korakiana.

It was a perfect evening to mark our arrival at the biblical age for the proper duration of our lives. My friend Kim reminded me that its unseemly to grumble at the problems of being old when so many don't get to be old. All the same today I asked Lin, rhetorically, what justifies me being grumpy and sometimes sad.


“I’m closer to death. Although I’m healthy, I’m weaker and shall get more so. Lefteris is poorly."

A few days ago he fell, a second time, off steps he’s been using all his life. His back's purple and black. We heard him crying out one morning and ran to try and help but Vasiliki was well ahead of us.


“People die. I’ve no older relatives to talk to. My mum passed in 2012 at 95, your Dad in 2016 at 98, your mum last year at 94. We’re the elders now ... One of our best friends is suddenly ill - diagnosis maddeningly uncertain - and won’t be back to Corfu this year. But it’s not just the elderly who are dying or sick but people in the prime of life. Y crashed his motorbike this July, widowing his young wife and leaving his young daughters fatherless. K and T suffered the worst catastrophe –  their only daughter, aged 28, about to be married, died without warning this March after drinking a morning coffee. A few weeks later my friend Dave phoned to tell me Trish his wife, hardly 50, had, out of the same blue, a fatal heart attack. 'She was meant to go after me' he said. There are other bad things affecting acquaintances. Martin who tripped over a low wall in Duikades a few months ago and fell three metres onto concrete; flown back to England unable to walk or think straight, stuck in therapy for months perhaps disabled permanently. B's wife in an induced coma in the island hospital, suffering sepsis. What a catalogue and there’s more. P, so full of life and wisdom, undergoing the ordeal of chemo following five hours surgery to remove suddenly discovered tumours. That doesn’t count unheralded separations of people we’ve enjoyed as couples – three, perhaps four, whose happiness together we’ve witnessed, whose exchange of vows – spoken and unspoken - was part of my hope for people living happily ever after, their children as banners heralding the out-dated pledge ‘so long as we both shall live’.  And look what's happened to our fecund orange and lemon trees, infested with scale insects and black mould, becoming barren of the fruit that fell into our hands in such abundance!"

Just before our grandchildren were born Amy and Guy bought a house, with our help, on the edge of the city. It was near the largest sewage works in Europe and under the flight path of Birmingham International Airport, but behind it, until the rising ground arrived at the woodland skyline, were fields; arable farmland laced with footpaths, three hundred yards from a canal that led north west from the heart of the city, along whose towpath I could cycle seven miles from Handsworth, via Spaghetti Junction, to visit them, often with Oscar dog running beside me, or, when he got too old to keep up a reasonable pace, and too blind to stay out of the water, sitting in my front pannier.  It wasn’t what you’d call a posh place. I’d say it was 'Minworth', though the post code implied ‘Sutton Coldfield’.
I thought it a brilliant choice; a walk from Minworth Primary School where Guy became a governor. There were country walks – indeed a gate like a magic door in the hedge at the bottom of their garden led into fields. Shops were close. They lived an easy drive on the Tyburn Road from our home in Handsworth.

Two years ago, with much touting by the city of its contribution to providing 10,000 jobs to enrich the Midlands economy, Birmingham City Council was allowed by HM Government to breach the city’s constitutionally defined ‘Green Belt', permitting the construction of 6000 new homes, and, over the next five years, a factory estate on the fields behind the family home on Summer Lane.

Footpaths were stopped. Signs showed the farm land awaiting concrete. The football field, on fallow grazing behind their house, was flayed and laid with wormless astroturf. A substantial clubhouse arose.
In his last year - 1993 - my stepfather wrote an ode to his love of the countryside that ended with the lines:


I said I must write a warning.  But I was angry and - as the
Japanese say - to be angry is only to make yourself ridiculous.

So we will live out our days in the cracks between the
concrete.  And then they will pour cement on top of us.

Amy and Guy, now with our grandchildren, Oliver and Hannah, and with our long term family friend, Liz and her husband Matt and their children, Sophia and Henry, didn’t wait. A year after the blighting of their edge-of-town countryside was announced, Amy and Guy put their house up for sale. Guy gave notice at the place he’s worked over 20 years, and Amy, with help from family, bought a house on the edge of the Forest of Dean at Drybrook in Gloucestershire – a few hours' walk through the woods to our cottage in Lydbrook. The sale of their house in Birmingham awaits survey and searches before exchange of contracts. They started moving into the new home the third week in August. On Monday 2nd September the children, in new green uniforms, started their year at a primary school in Lea, just over the Herfordshire border, 15 minutes drive north from Drybrook.

I’m pleased Amy had the resolution to make this move. We have mixed feelings. For the foreseeable future we shall see far less of our family. Richard’s been working in Istanbul for a year. Now Amy’s moved to an area that has the protection – though naught’s guaranteed – of a National Forest, a  place we’ve known and loved for over 35 years; buying Rock Cottage up a path on Bell Hill, Lydbrook in 1981.

Amy and her family won’t have to wake in the morning to the dismal sight and sound of construction-destruction. It’s almost, but for the wild life, a win-win circumstance, since for many the  ‘exciting development’ on the edge of Birmingham adds to local property values, bringing what government PR calls ‘employment, retail and leisure opportunities’.
On one of the first days, the new house sale near completed, in the middle of August, I took a train to Lydney from Birmingham. Guy collected me from the small station to stay with the family at Rock Cottage. Next day I was driven four miles eastward, via Ruardean, to see their new home in the country. I walked around it inside and out and saw it was good. Amy and Guy went measuring for carpets in Cinderford. With Hannah and Oliver and a map I headed into the forest, few hundred yards from their new home, to walk to Lydbrook. We were without Oscar. Our 17 year companion had died of old age in our garden in Handsworth on the first day of August. I buried him on our allotment by the park – along with an episode of our lives.


It means the end of seeing our family in the city, taking buses, trams ... 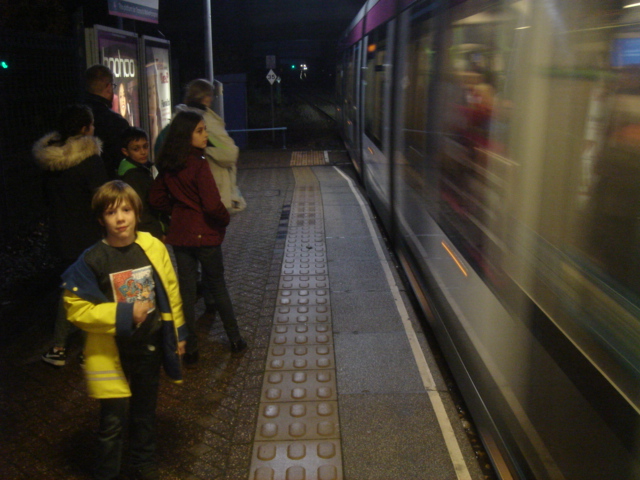 ... in and out town with Oliver and Hannah, cycling in the park and along the Birmingham canals, helping open and close lock-gates... 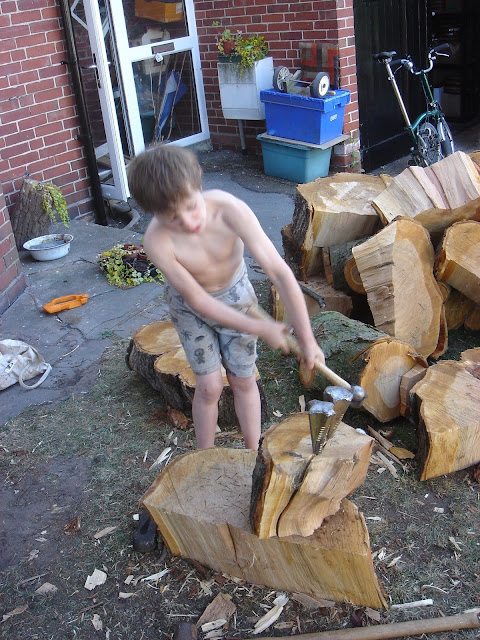 ... working with some of Handsworth Helping Hands activities, dipping biscuits in my tea, visiting Handsworth Park ...


... strolling through the Birmingham markets together looking at wares, chatting to stallholders, having snacks at the baked potato van, watching me eating oysters, learning to spend small pocket monies, visiting St Philips Cathedral and St Martins-in-the-Bullring to light candles "for great Nan, for Jack Hargreaves, for Oscar" 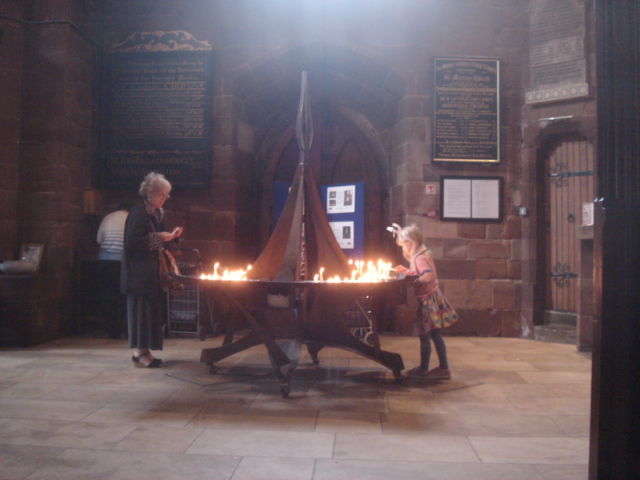 ... and dip fingers in holy water and listen to my stories about the stained-glass windows, meet people and ask questions of people with placards spreading political and religious messages,  take part in defending allotments...

...listen to buskers, spot a homeless man sat in the street – perhaps bring him a coffee or a soft drink, visit the big bookshop at the end of New Street and leaf through books in the children’s section and talk to staff, wander down the Great Western Arcade looking through shop windows, buying rich cakes from the Polish bakery at the Colmore Row End, 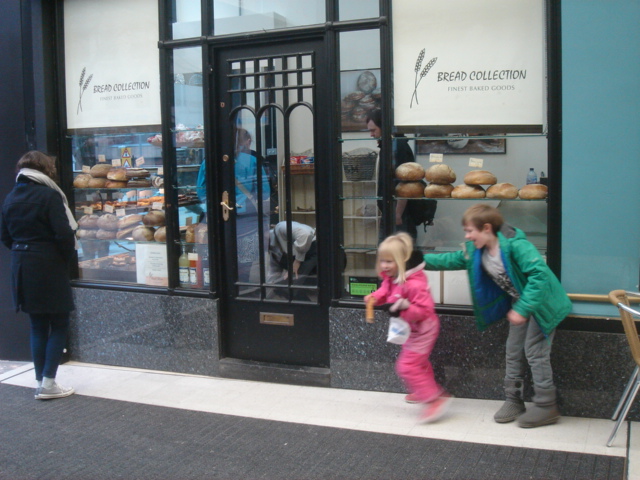 ... sit together in the window of Pret a Manger trying to get smiles from those passing outside by waving and knocking on the plate glass, keeping score, and ever asking and answering questions – watching, observing, having small adventures to mull over at bedtimes. It means and end to the grandchildren staying overnight with us helping and chivvying their homework ... 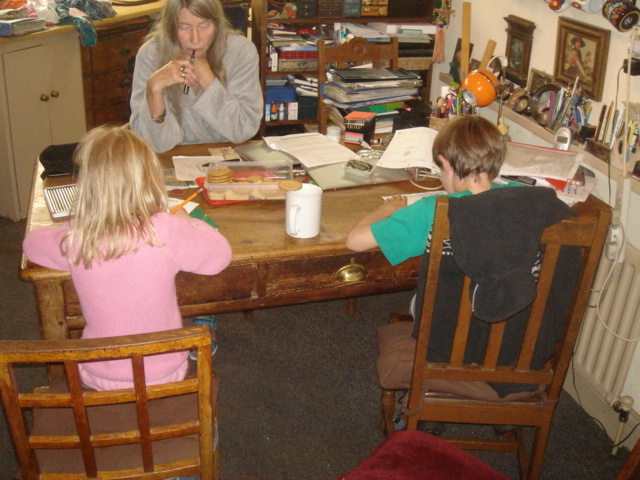 ... as well as studying the dramas of Titanic, Bismark, Graf Spee, Marie Celeste, and Nelson’s Victory, the battle of Waterloo and The Battle of Britain – with the aid of exciting films especially A Night to Remember and the films of Sergei Bondarchuk and Guy Hamilton. For the time being it’s an end to striving to answer Oliver’s questions about the universe, life and death, Aston Villa, and the nature of vampires, and Hannah’s interests in saving the polar bears and the existence of unicorns.