‘In the leaves of every forest, in the flowers of every garden, in the waters of every brook, there are worlds pullulating with life, as innumerable as the glories of the firmament.” Thoughts on Animacules or A Glimpse of the Invisible World Gideon Algernon Mantell (London 1846)

Two months ago a young woman walking in Handsworth Park called to me through the fence behind my allotment. She wanted to know how to rent a plot here. I told her the procedure
“Contact Birmingham City Council Allotments Section or fill in a form on the council website, naming Victoria Jubilee.”
I asked gently about her experience of gardening “None”
“Go for a vacated plot that’s had work done on it. The ground here needs a lot of work. It can be disheartening.”
I told her something of the history of how these allotments had been saved from being built over and how relatively recently they had been opened by the City Council, handed over in far from adequate condition by the developer of the neighbouring houses on the Victoriana estate.

A few months later Winnie tells me that, while I was away, the person who’d enquired had taken on the almost entirely unworked plot next to mine, and another next to it. Both!

Since then, a month ago, we’ve seen no-one working either plot. Both are thick with couch grass,
large stones and, I suspect, the same additional rubbish that, over five years, we’ve slowly cleared from Plot 14. On the other side – Plot 15 – an old Sikh man drops in now and again and does a little more heavy hoeing at one end of the plot, cultivating a bed of onions and garlic. His plot, outside a few square yards, is also heavily overgrown with couch grass and brambles. He comes and sits in the shelter of our shed veranda now and then. He was grateful to Winnie for running a strimmer over his plot – a measure that also helps prevent his weeds spreading to Plot 14. Sometimes I wish we had immediate neighbours from whom we could learn, but at other times I like the relative isolation. Active gardeners from further away drop by to look and chat – so sharing happens across the site. I also like many of the wild flowers cropping up on our neighbours’ fallow ground.

March 2015 – into the fifth year from the month the new VJA opened – saw Plot 14 becoming the success I always hoped for but didn’t quite expect.

Yes. By the summer of last year we had gluts, and suffered insect attacks and other failures but, between us, Winnie and I had got on top of the weeds, especially the ubiquitous couch grass. The steadily enriched soil, greatly de-stoned, is at last loamy and fecund, accessible by spade.

This year with Winnie, my essential partner on the plot, we’ve constructed a sturdy 15’ x 15’ fruit cage, after one I started last autumn was blown away by winter winds...
I've bought, and we've set up, an 8’ x 8’ wooden greenhouse fitted, like the shed, with guttering to harvest rain in two butts. 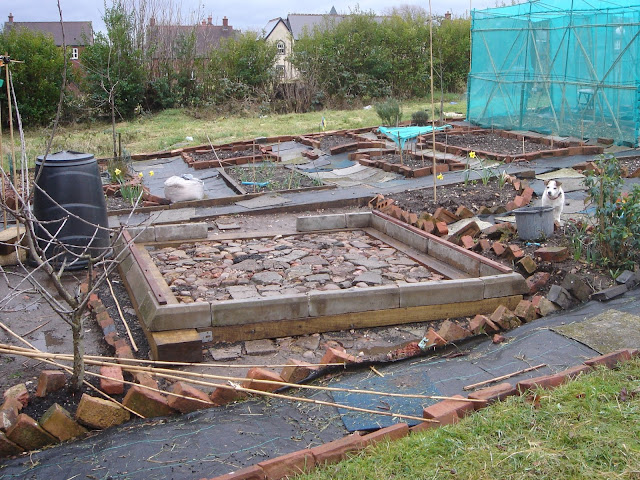 The greenhouse - an Alton - is old but high quality, re-erected on a solid but legal foundation of rail sleepers and compacted rubble next to the shed, where I used to grow Jerusalem Artichokes. 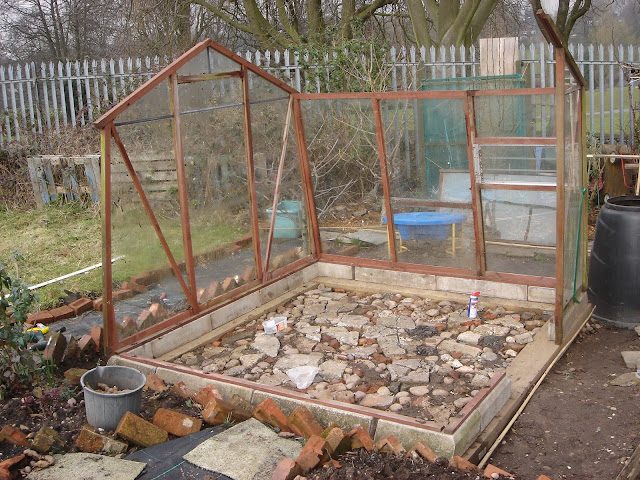 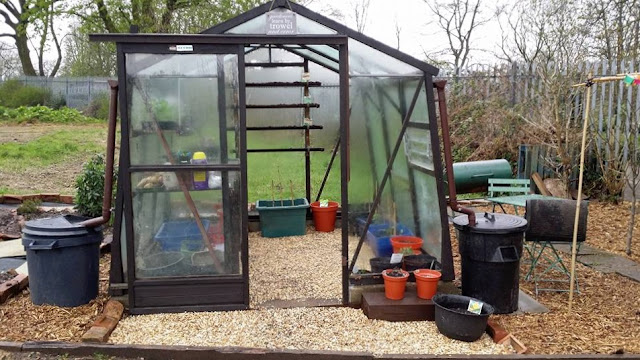 A greenhouse opens up more possibilities of incubating seed and bringing on seedling plants.
A small pond, put in last winter, seems to have attracted frogs. We’ve an asparagus bed of mature crowns donated by a vacating plot-holder. I’ve made a map of the plot’s 24, now 26, separate beds and am keeping a log of activities – what’s planted, what’s harvested, mistakes and successes.
We’ve managed to get free supplies of wood chip and gravel to lay on several walking areas, all of which are covered with weed suppressant textile. I’ve got working compost organised into three bays - helped on some days by my beloved grandson...
...and friends. 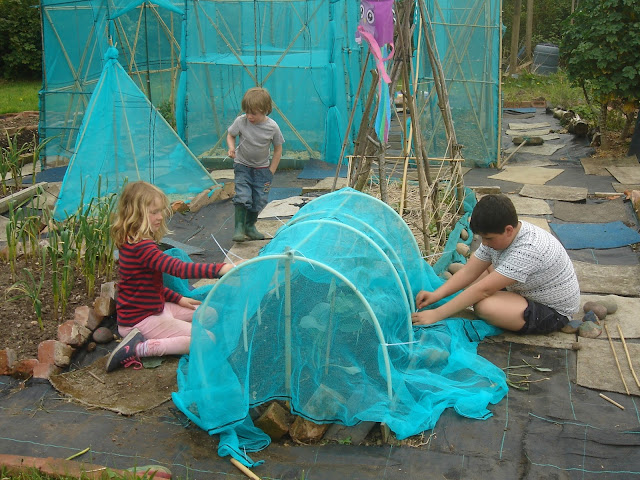 My fruit trees are getting older and may even produce fruit this year, while I’m hoping the raspberries, loganberries, gooseberries and strawberries planted late last year in the fruit cage will produce a harvest, as also our three two-year-old rhubarbs. I’ve now got potatoes more organised, having grasped the idea of first and second earlies and main crop. And, latest news, we now have a colony of Buckfast bees – brought in by Gill Rose to replace the bees that went berserk last June and were so sadly but necessarily destroyed. And a wren has made her nest in the shed veranda...


We’ve got a BBQ and tables and chairs for visitors and have already happily celebrated two birthdays on the plot – the gazebo in the shed brought out to cope with rain.