Every morning. Rain. Grey clouds and rain and gusting wind. This grisly weather has been going on since we came back to England seven weeks ago. Our plane took us away from daily blue skies, blue seas, gentle breezes; warmth that had lasted longer than usual, even in Greece.

A few nights before we left we'd walked down to Sally's stables below Ano Korakiana to stand around a fierce fire, sparks spiralling into the dark. 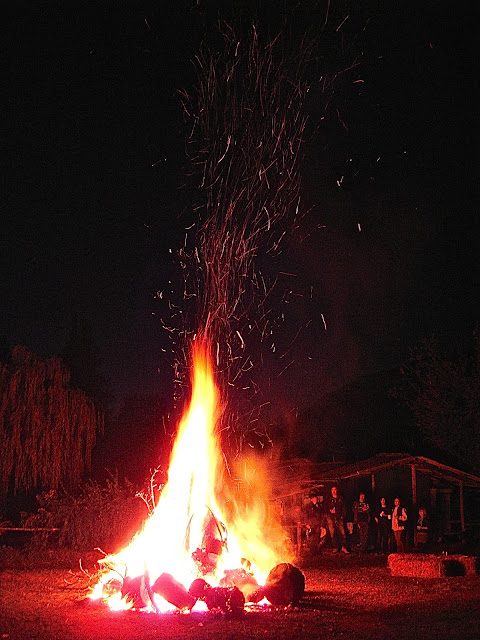 We sat with friends around a large grilling rack  - 5 feet across - on which we'd brought meat to cook - chicken, village sausages, liver, pork, souvlaki; beside the grill, trestle tables of bread, salads and drink. Well fed, we gathered round the fire. When its first fierce heat dispersed. Some of us gathered more wood from a loose heap some yards away, braving the heat to push large palm logs to smoulder further into the fire. Lin and I walked home along the Ano-Kato road, climbing steeper alleyways and steps to home on Democracy Street.
*** *** ***
To stop having to grow seedlings from retailers and to extend the growing season and perhaps grow what will not survive wholly out of doors I'd like a greenhouse - a good one, wood not plastic or metal.

Before I can put up a greenhouse on Plot 14 I need four tanalised rail sleepers on which it can sit. My after-Christmas sally to a vast builder's yard in Wolverhampton, Carvers, using Lin's sat-nav I ended up in a cul-de-sac - a fragment of narrow Littler Street severed by city centre redevelopment - gazing through the drizzle at my destination beyond a dual carriageway that took 15 minutes to get across, via successive traffic lights and roundabouts. Through check-points, two lads in yellow wet suits lifted a 3 metre x 120mm X 240mm beam onto the roof of the HHH* van after struggling to get more than three inside. The rain sweeps across the yard - still part cobbled, old Littler Street. I pay at the timber office and head back by wet windy motorway to Birmingham... 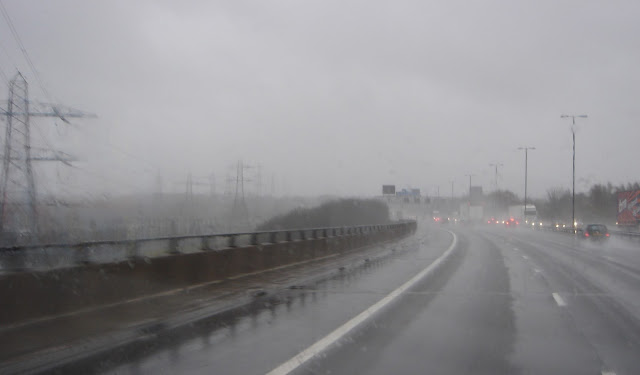 ...to unload the heavy wood on plot 14, beside to the greenhouse pieces Winnie and I had collected from a seller in Halesowen who'd advertised a 20 year old 8' x 8' Alton Amateur Greenhouse for £275 (including spare parts, concrete base, instructions, disassembled ready to collect) on Preloved. New it would have cost over £2000. 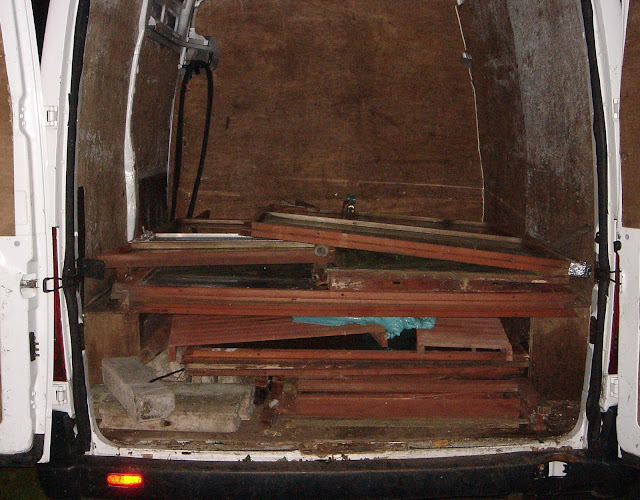 Feeling the wind as it hurled itself across the allotments, having wrecked structures all over the site I changed my mind about siting the greenhouse at the top of the plot.

"Behind the fruit cage" I said to Winnie "It'll be protected from a lot of wind there"
"No. That'll get over shaded in summer. Why not where you've had the Jerusalem Artichoke forest front and right of the shed?"


Now it's a matter of studying instructions, getting any extra spare parts needed, solving a complicated puzzle, laying firm level foundations; getting the greenhouse put together and used. 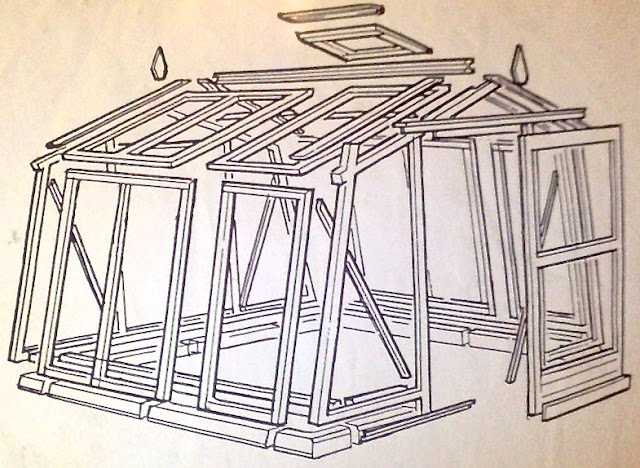 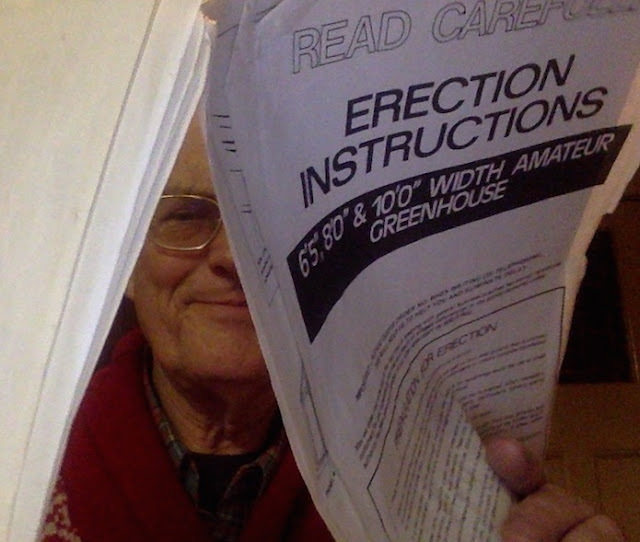 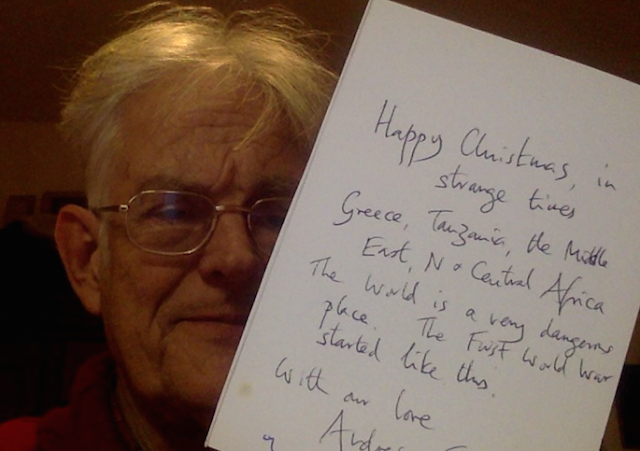 ...my memory of this Christmas? Amy's best friend, Liz and her baby son, Henry and four generations of us at table on Boxing Day, the oldest, Arthur, saved from a 'pie' in the face - a game brought to the table by my son, Richard - followed by me, who gets a squirty cream splat, to the laughter of all - loudest from my three and a half year old grandson, Oliver. Dorothy, his great grandma, my mother-in-law, more interested in a photo album of her grand-daughter's wedding to Guy.

...and seeing this Alex, who lives with her family in France near the border with Spain, shared this with the message "Simon! Where you lead the dog world follows"
...and another memory of Christmas, just before Amy, Richard, Oliver, Hannah and I went to Lichfield - Richard and I by train from the new New Street Station embedded in the new Grand Central Development of Birmingham, which I like, not least for our new reflections...

... in the once pebble-dashed cliff that fronted the ugliest concrete warren of a rail station in Europe, which pleases Oliver gazing up at an big selfie in the stainless steel reflections of Alejandro Zaera-Polo's and Maider Llaguno's construction. 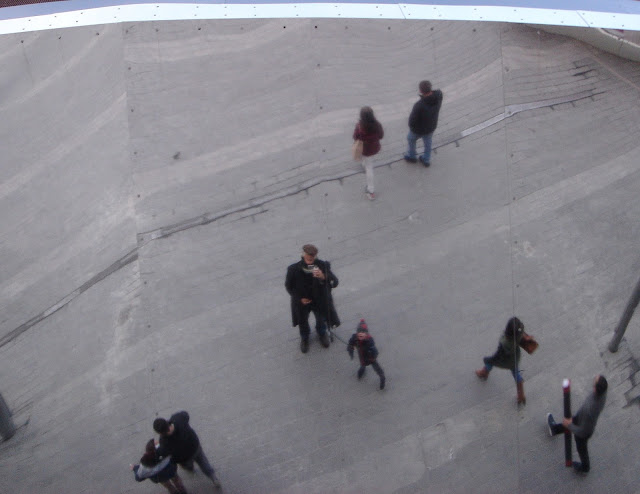 Lichfield offered us a small town with easy enough ways to get about and know where we were, but few finds when it came to buying Christmas presents - even from charity shops. Best places were pound shops filled from China.
I said to Richard "I wish we could have a drama series about life in Yiwu or any of the thousand and one Chinese factory estates producing all this stuff for every corner of the rest of the world!"
It was good to be in company with family, with Liz and her new son Henry James joining us for afternoon tea in the Tudor of Lichfield.

A lull in the weather ended. From mid-afternoon rain and wind advanced from the west.
"You take Oliver home?" asked Amy "Guy'll collect him tonight"
I knew she wanted time to chat with Liz.
"Gladly"
Richard and I walked back through wet streets to what must once have been an attractive railway station for the city. Despite the wet and the chill the waiting room was closed. I enquired at the ticket office.
"It's been urinated all over" grumbled the man behind the glass, almost resenting us for asking.
"Might have helped if the station toilets hadn't been closed" muttered Richard as we stood on the windy platform.
In 45 minutes we're back in Birmingham. During the journey Ollie had asked to go to the lavatory which was not only available but surprisingly clean. Thank goodness. Richard headed home on foot. I and Oliver walked to a bus stop on Station Street; the 16 bus pleasingly re-routed in only the last few months to a stop opposite the Old Repertory Theatre, a matter of hardly 50 yards from lifts into the new concourse. Oliver, holding tight, climbs to the top deck to sit at the very front where, as the bus stutters stop-start, through packed traffic moving below walking pace until at last we're past the St Chads Queensway lights heading out of the city centre down Old Snow Hill Street. He entertains himself and me drawing a mural in the condensation of the bus window...