"I want a boat!” said Oliver
“You mean you’d like a boat”
“Yes! A boat!”
“Make him a boat, grandpa” says Amy
I glued and screwed together two pieces of moulding – useful bits kept in the apothiki; fashioned a bowsprit from another shape cut out of something else, added a deck house, and cut a piece of old broom handle for a funnel adding plus two paddle wheels cut from ply - the bolts fixed through the sides and riveted with the ball of my hammer to hold the nuts.
“It’s like that tug that’s towing the Fighting Temeraire”
“Make it so it can be pulled along”
“Hm. OK. I’ve also got to check it floats the right way up”
“You only really needed to put a piece of dowling in a log”
"You mean I'm making it for me?" 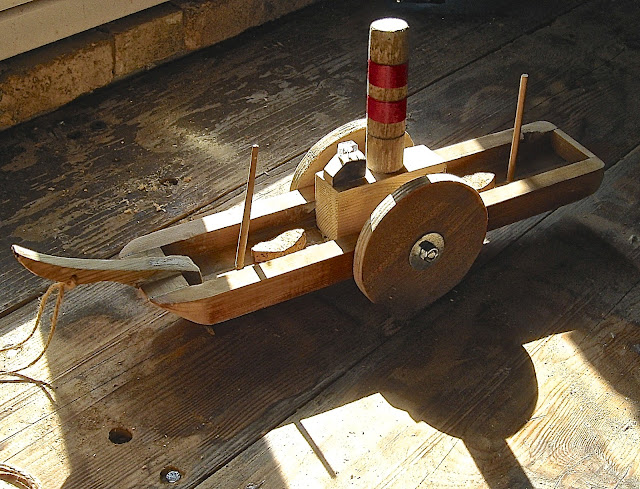 The water in the Ermones River is crystal clear. It runs, just a yard wide and two feet deep, into the surf on the shore. The little paddle steamer drifted into an eddy, under a footbridge, then caught the main flow which ran into the ripples of the collapsing waves of the cove. I was enjoying the voyage until the current sped up of a sudden and the boat was tumbling in the shallow surf, everyone laughing; Oliver crying out in alarm. I waded into the sea and caught the boat on a returning wave. 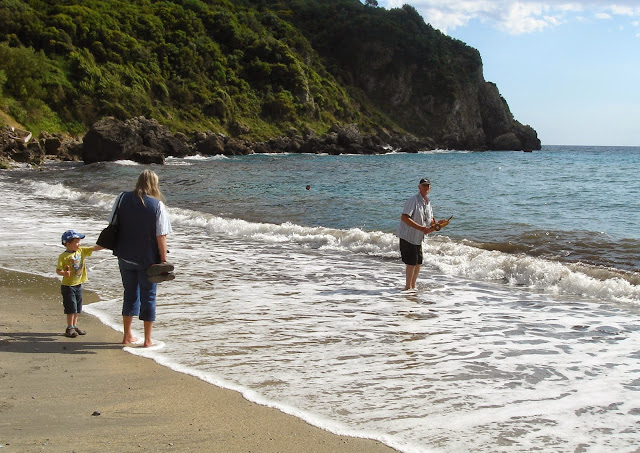 "She's fine. The bowsprit's cracked but I'll mend that tonight. I should have varnished her first but I couldn't wait"

*** *** ***
The novel Suite Française exemplifies the sympathetic fallacy in reverse; perfidy, and violence in central France in the June of its third German invasion in a century. I had difficulty when on peaceful contented family holidays in Normandy and Brittany in the 1990s, imagining this green and pleasant countryside fouled by war - one in which my relatives, especially my dad, were to be at hazard two years later. In France in 1941 edging into 1942, Irène Némirovsky wrote the first parts of what she intended to have five parts – a book on the scale of Tolstoy’s War and Peace; avowedly achieving its timelessness. In July 1942 Némirovsky was arrested by the French police, handed over to the Occupying Germans; swiftly transported her to Auschwitz where. sick with typhus, she was killed on 17th August 1942, four and half months after I was born. Dolce and Storm - the first two parts of her work – published 62 years (translated into English in 2007) after her murder - describe people escaping from Paris in face of German invasion, and then, life in a French village in the south of the Occupied Zone where a German regiment is stationed for 3 months before being summoned away to fight in Russia.
‘Soon the road was empty. All that remained of the German Regiment was a little cloud of dust’…and that’s it; the separate characters in Dolce and Storm, yet to meet, in parts yet to be written, remain forever separate. Némirovsky wrote without knowing the outcome of the war or the possibility that the proclaimed 'Thousand-Year Reich' - Germania its capital - would soon fall. It's a truly unfinished work. After reading the ‘first’ 340 pages of what was intended to be a 1000 pages, I so desire to continue, yet suspect the vile circumstances that have deprived me of the symphony the author was planning, will ensure what survives endures in imagination. Suite Française is thus published in sublime and poignant draft. The author's notes show reworking was important. She had no time for it. An un-sanded unvarnished unframed sketch stands on its own even so, made memorable and poignant for being two out of five episodes. Unfinished paintings take me closer to the artist, notwithstanding the possibility the lack of finish is intended. One comment especially …


‘the book itself’ she writes in her planning notes for the whole ‘must give the impression of only being one episode … which is really what is happening in our times, as in all times of course.’

Ah yes …’as in all times of course’. We live not in beginnings, middles and ends but in episodes. Don’t I read books, for stories, with beginnings. middles and ends; even where there are formal episodes I want them to be chapters that start, continue and conclude a story. I don’t want to think - or perhaps I’m on to something I hadn’t properly considered - that enduring ‘soap operas’ – the Archers, Coronation Street, both going on around 60 years – are a closer representation of what happened; is happening. My life, anyone’s life, fits the notion of beginning, middle and end, a biography, but perhaps I should think instead of mine and the other lives that have crossed, are crossing and will cross mine as episodes. Beginnings. middles and ends, births, and deaths, are critical to biographies, but not in series, not in episodes, or not in the same way. They happen but they no longer define a plot or storyline...
**** ****
When we were first here, eight years ago, almost tasting the beauty of the place, we dismissed the smell as one that came from a soakaway, βόθρος - unused to new arrivals, or possibly to a predecessors’ habit of using bleach, and other chemicals that interrupt an efficient cess pit’s necessary chemistry – a hole in the ground that was once a well into which the water from domestic sinks, baths and WC flow and disperse into the surrounding ground – not a cesspool, a closed tank, that must be pumped out regularly. Inspections showed our cess-pit was invariably ‘sweet’. The wafts were from next door – miasmas drifting below our noses whether on the veranda, the garden, even our balcony ten feet above the neighbour’s garden. Like wind broken in company we’d collude in ignoring these smells, especially as on breezy days the worst dispersed. But amid our comfortable life we needed to deal with the bother of a problem that was technical and diplomatic.
“You’ll just have to have a word” said Lin this April. I looked up words in the English-Greek dictionary ‘smell’ ‘bad smell’ ‘cess-pit, ‘overflow’, ‘leak’….
Between our properties there’s a gully hardly 45cms wide and about 4 metres long, which carries grey water from our neighbour’s garden into a small culvert under our garden into waste ground. This gully is floored with an inch of concrete; carrying, as well as water, occasional plastic bags, cups and bottles that trap in a metal grid before, some of it slipping into our garden. We clear this now and then. Last year seeking the source of the cess pong, Lin sealed several small leaks coming through the concrete below the mouth of the gully. This caused leakage further up. 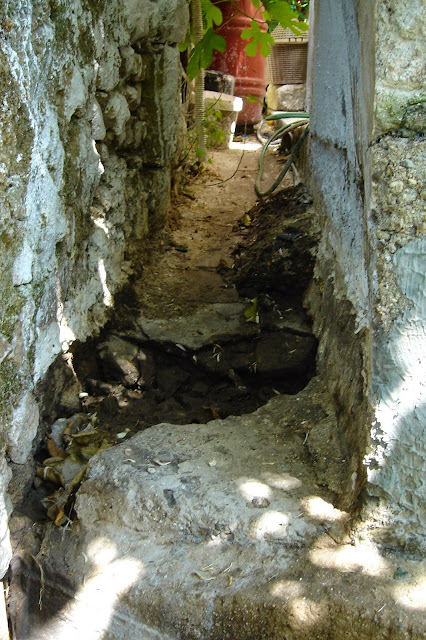 “Water finds ways” said Lin.
It became clear that under the narrow concrete of the gully was a thin layer of rubble and under that, earth – black soil, a capacious sponge containing all that leaked from the cess-pit. Any sealing we’d done so far, led to the cess working through the soil and trickling out of the wall higher up.
“Whatever we do” said Lin “we just drive the leak higher”
This month we tactfully approached Fote and showed him a ‘problema’. He pointed out he’d had the soak away pumped out two years ago. We remembered that but, ..."now the smell is as bad as ever”.
A few days later he attempted a bolder solution – applying a rough cement mixture that sat like a bank six inches high along the margins of the apothiki that stood on top of the soakaway where it backed onto our garden.
“It’s not working” said Lin one morning after “and look, he’s inserted a small length of hose pipe at the end of his bank of cement which is emptying into the culvert under our garden."
The smells hadn’t abated.
“We have to make a more thorough push on the problem” said Lin
Paul had told us about a product he used to seal leaks in swimming pools – Waterplug or Aquafix.
“It fills cracks even as water trickles out” he said
We realized our earlier efforts using quick drying cement applied during siesta when there was no waste water generated, were based on not understanding exactly where the liquid and accompanying smell started.
“First we block the leakage into our garden coming from the back of the apothiki.”
We had nine 45cms square floor tiles which, once the leaks had been sealed with aquafix, covered with cement containing Revenex – the local equivalent of pudlo – to make it water proof and then another large layer of mortar holding on each tile that sat neatly in a four inch concrete ledge. Nine tiles did this trick sealing small leaks and places where we might expect future leaks. Then came the tough bit - an incursion into our neighbour’s gully.

I removed the metal rubbish grid with help from the angle grinder, giving us access to one side of the apothiki. Once Fote’s work had been hacked back - not tricky as it was quite soft - the leak into the gully was apparent, flowing over a thin layer of cement into the soaking mud under the gully. I hacked out blackened muddy pieces of rubble.
“You’re just making it worse” cried Lin
“No I’m not”
I applied a hose pipe to the pool of black water that had seeped into the hole I’d made in the gully. Syphoning out the water revealed a lengthy seam in the side of the apothiki below the level of the gully. The water once syphoned swiftly refilled the messy hole I’d made in the gully
“I’m opening up the wound”
“No you’re making it far worse!”
“Watch” I said, having my doubts.
With my hands - rubber gloved - I reached into a horizontal hole that seemed hard enough on top but was edged below with muddy rubble. I pulled this out, widening the hole until I felt I had a base of sorts.
“The problem is that the main leak is below the edge of the gully”
Lin was sceptical. The smell was of course as bad as ever. The next morning I assembled lots of cardboard, soaked it and shoved it in to plastic bags. I then started shoving these into the hole to staunch the leak. 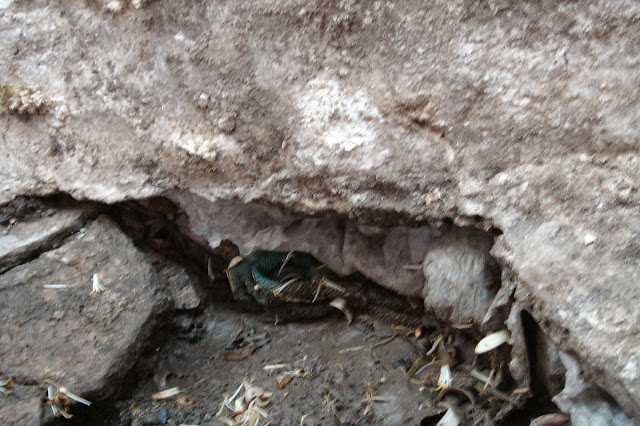 The hole’s appetite for filling was considerable. I pushed the bags in until my arm was in the hole above my elbow, packing in more bags filled the same way. I used a block of wood to press the filling into every part of the hole, banging it with the lump hammer until the hole seemed thoroughly blocked, the plastic just inside the hole quite hard, with room to apply cement on top.
For three days with the smell gone, we waited. Then yesterday evening Lin mixed up quick drying cement, after I'd levelled the gully again with rubble and started filling the hole in the cesspit and the depression in the gully with cement which seems to be setting despite the shade and a few showers of rain... 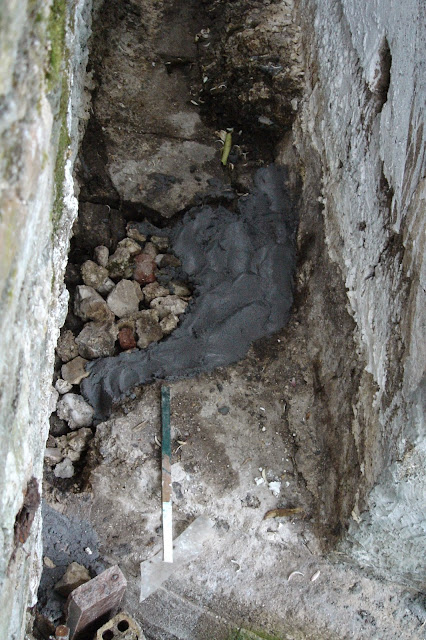 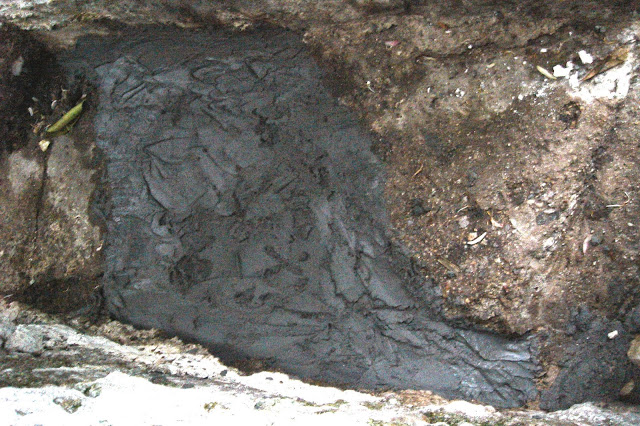 ...and our incursion into the neighbours' space has gone unremarked.
Posted by sibadd