No sane Greek would have built a balcony out of wood. This structure has been giving us problems for years, but before we left Ano Korakiana this November we'd made an arrangement to have the present decking removed, all dozen support beams lowered and cleared of rot, the whole re-assembled with eleven additional tantalised beams and new hardwood decking.
The internet makes overseeing building at a distance much easier. Mark, working on our balcony off Democracy Street has uncovered and communicated an unexpected problem.
The front to back cross beams were all in place - the old ones ground and sanded to remove rot and the new ones tantalised; the lot treated with preservative, then Mark emailed:


Hi Simon and Lin. As you can see from the photo's from today most of the old  beams are now back up along with all the new 7x7 ones. It's been a long slow process getting the beams in order as I first had to get all the rotten wood out (ground out) then sanded out with an orbital using a very course grade p40, then 3 coats of the universal wood preserver which kills all manner of grubs and beetles apparently, then I gave all of the old beams the 2 coats of Resolcoat which seems to have gone off nice and hard so sealing all the preservative in and keeping the bad weather out hopefully.

A couple of problems have arisen -  one being the old beams are 14.5 cm x 7 cm (not all are this by the way) and the new ones are 7x7cm with the extra piece under the end being added to make them 14x7cm, which leaves half a cm out from the tops of the new 7x7 cm to the tops of the 14.5 cm beams, meaning  along with other inconsistencies with the old beams not running true we have the decking touching the tops of some of the beams and others not...

...at its worse out by 1 cm and its least ½ a cm, so I am going to have to pack in places to get the levels as right as I can.
- two you will see on the photo's the beam which is attached to the house (2 actually), the one that is directly under your balcony french windows.  In the very left hand corner the wood is rotten far worse than I thought, this beam holds the house side of I think the last 5 beams.


I saw a bit of rot on the top of it so got a wire brush and started to scrub away and it just fell apart on the back side up against the wall up until about half way along to the centre of your balcony door. You can even see one of the coach screws now from one of the brackets.

I have cleaned it out the best I can and given it some of the wood preserver and hardener, but I am not sure if it doesn't need to be replaced totally, which means I have to take half of the beams down again and get another length of timber and replace it
Maybe it will hold for many years after treatment. I don't know, so you can decide on what I should do with that one.
I am behind schedule as I have yet to remove the last middle beam and 2 end beams after having to secure the balcony first , which is in quite a sore state on the whole. I was hoping to be putting the decking on next week but I don't think so, not with these few minor problems arising, then of course I have to adjust all the beams so as they will allow the decking to sit on top .
All the old beams I numbered so as they went back on the same bracket in the same place and even with no work done to the bracket area of the wood on the beam apart from a little sand and then treated, they don't all allow the decking to make contact so I will have to either raise or lower them a little to try and square it all up, just shows how bad the work was done on it in the first place .
That's it , not all doom and gloom from below it looks quite nice. Sally and I think and the weather is great for doing this work. Hope all is well. Cheerio, Mark

Dear Mark. Thanks for the latest news on the balcony. It will cost more and take more of your time but there's no question this must be made good. Please go ahead and ‘replace totally'.  This is a key support for the whole balcony isn’t it? It will take more time but please order a tanalised beam from the Velonades yard. It’s a jolly good thing you found this. If it had been left, even with a dose of Resolcoat, it could have been a weak link in the whole ‘new’ balcony. Glad you are figuring out ways to deal with the inequalities of the beams as they emerge. That’s our John the Builder again. All the best, Simon

This wooden balcony has been a problem since we bought the house in Ano Korakiana in 2007. The house has two balconies - one of concrete, on the official house  plan, and our wooden one which is not. It is a temporary structure within the law. Turning it into a permanent structure - or stone, iron or concrete - would be an expensive bureaucratic nightmare. Ignoring the law and creating an illegal addition would be no better, as planning regulations are tightened across the Republic - and rightly so!
Early on we made the mistake of thinking we could make the balcony leak-proof, so that the area beneath it would be dry in bad weather. We covered the decking with UV resistant polythene. Lin and I went to great pains to seal it all the way round. We should have realised that covering the wood in this way would make it sweat, encouraging rot. 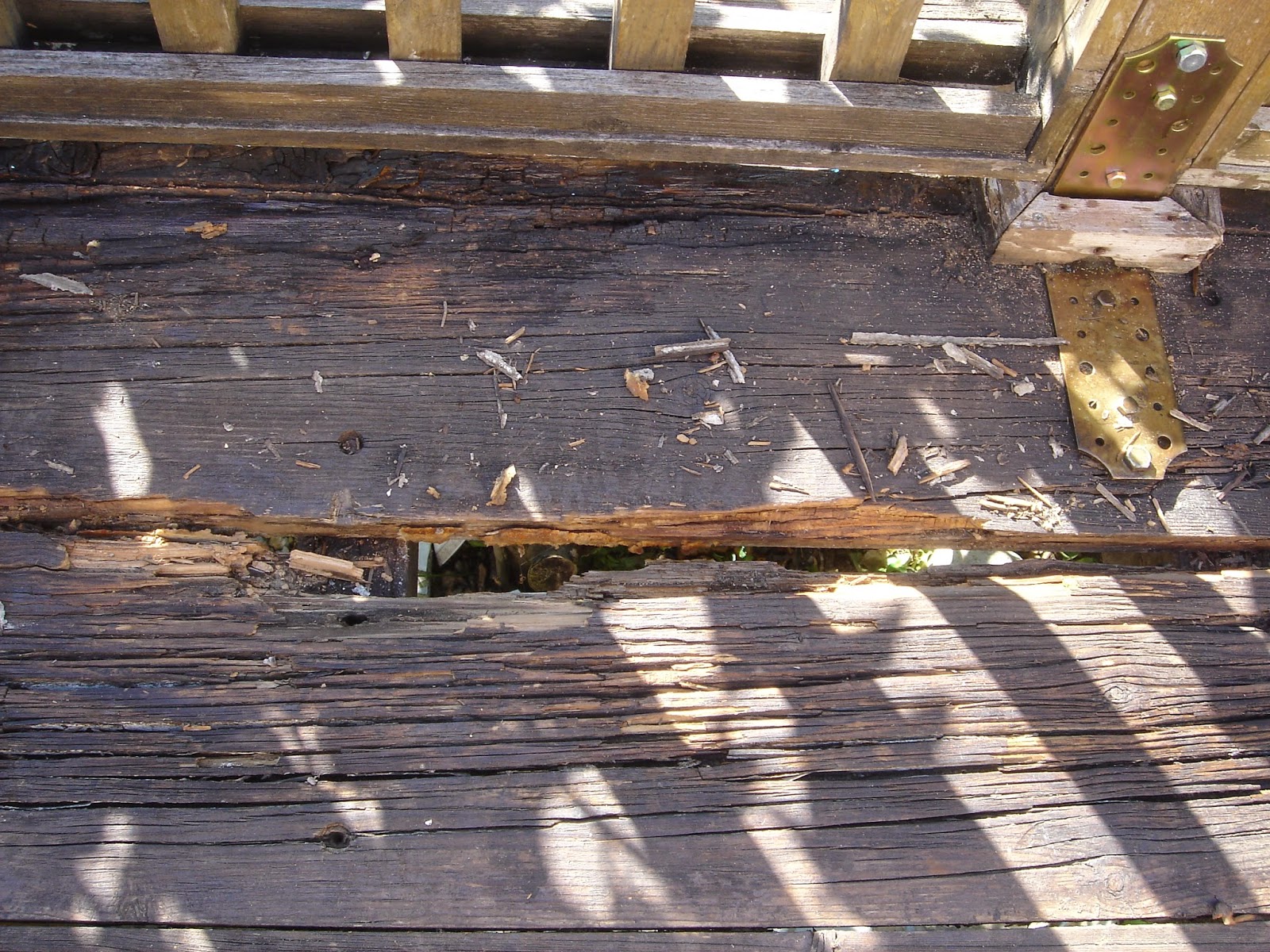 I put some L-brackets under the dodgier decking and even began replacing some of the planks - an expensive option that didn't deal with rot in the support beams.
By May this year I was putting temporary planks over the worst areas of rot; wholly unsatisfactory, especially as we'd at last dealt with the problem of keeping the space under the balcony dry by rigging a tarp on hooks and carefully anchored bungees. 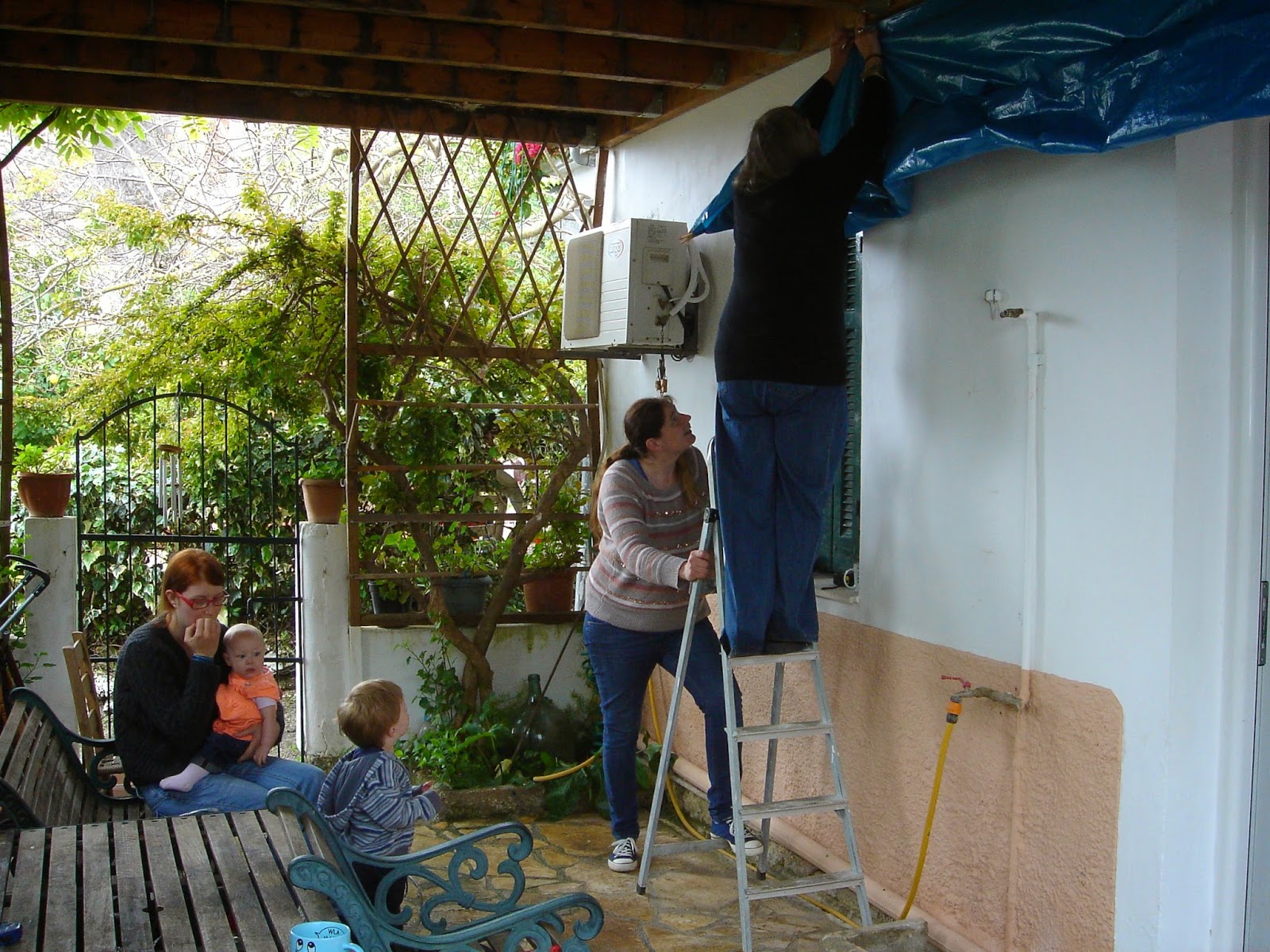 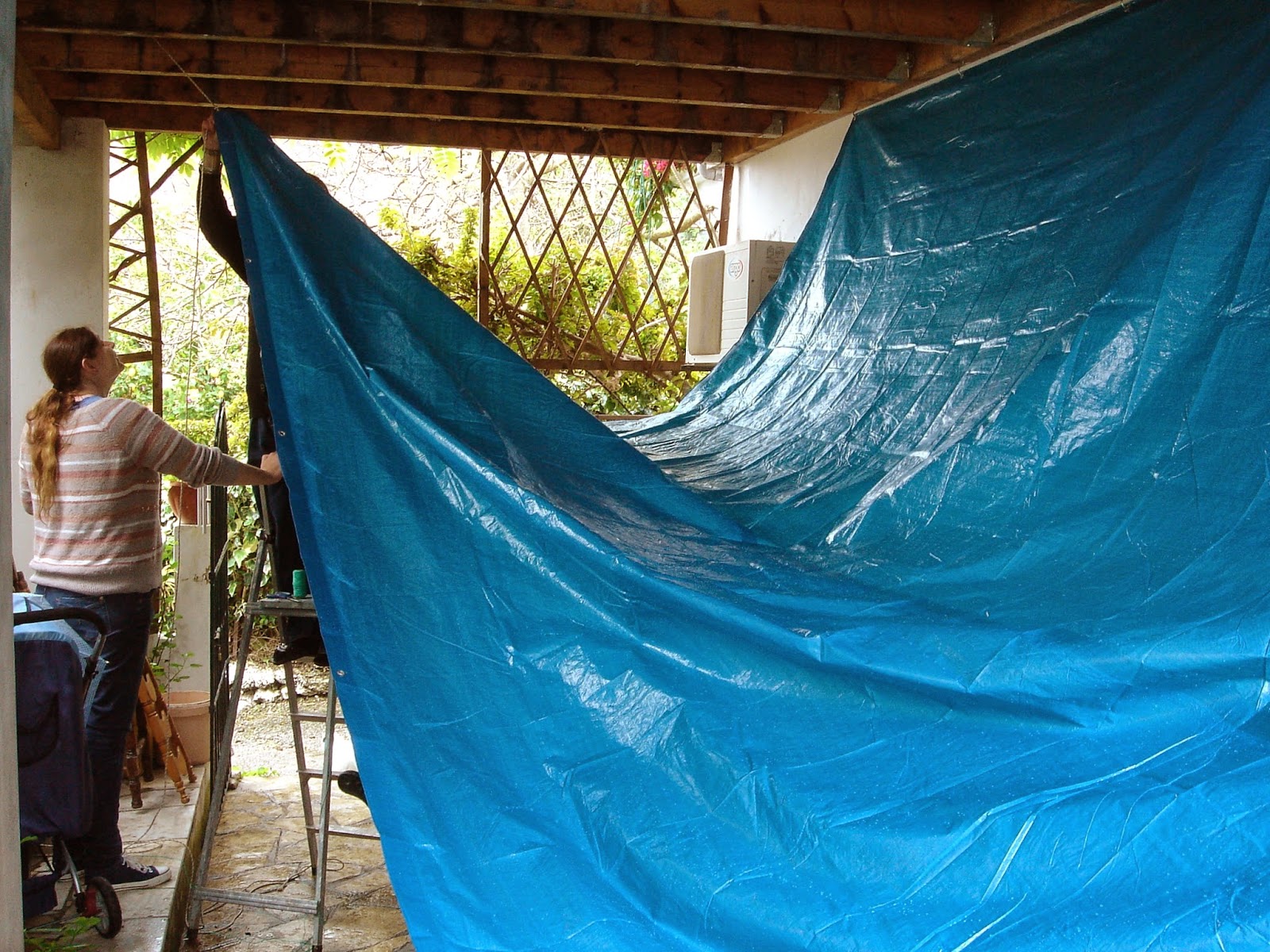 Once the tarp had been fitted the first time, it became a matter of minutes to put it up again. It works perfectly. If only we'd thought of this years ago. The new decking will have gaps between planks; no attempt to make it into a 'roof' for the veranda below. It will be stronger, having more support beams. It's hardwood, more resistant to sun and rain. The wood will never be covered again, prevented from breathing or allowed to rot. Yet the balcony will remain a temporary structure; not too tricky to dis-assemble if required.
Why all this trouble over a balcony? When we first inspected this house in in 2005 we were taken out onto it and saw the view. As we stood on this balcony gazing over the island's olive-clad contours, on to the Sea of Kerkyra, to the mountains of Albania and mainland Greece, Linda and I decided to buy the house.

One of our neighbours from Democracy Street - Angeliki Anthi - posted on Facebook:

Could anyone ask for such generosity of spirit?

**** **** ****
I had lunch with Mark Woblee* in town. He'd driven down from Lancashire to give me recordings he'd made of Old Country as a young man. We had two pints of Doom Bar and sausages and mash in The Bull on Loveday Street. A proper pub entirely built for privacy in public and undamaged by restoration and fake tradition.
*Mark's domain name! He's really Mark Carroll, but I rather like Woblee. 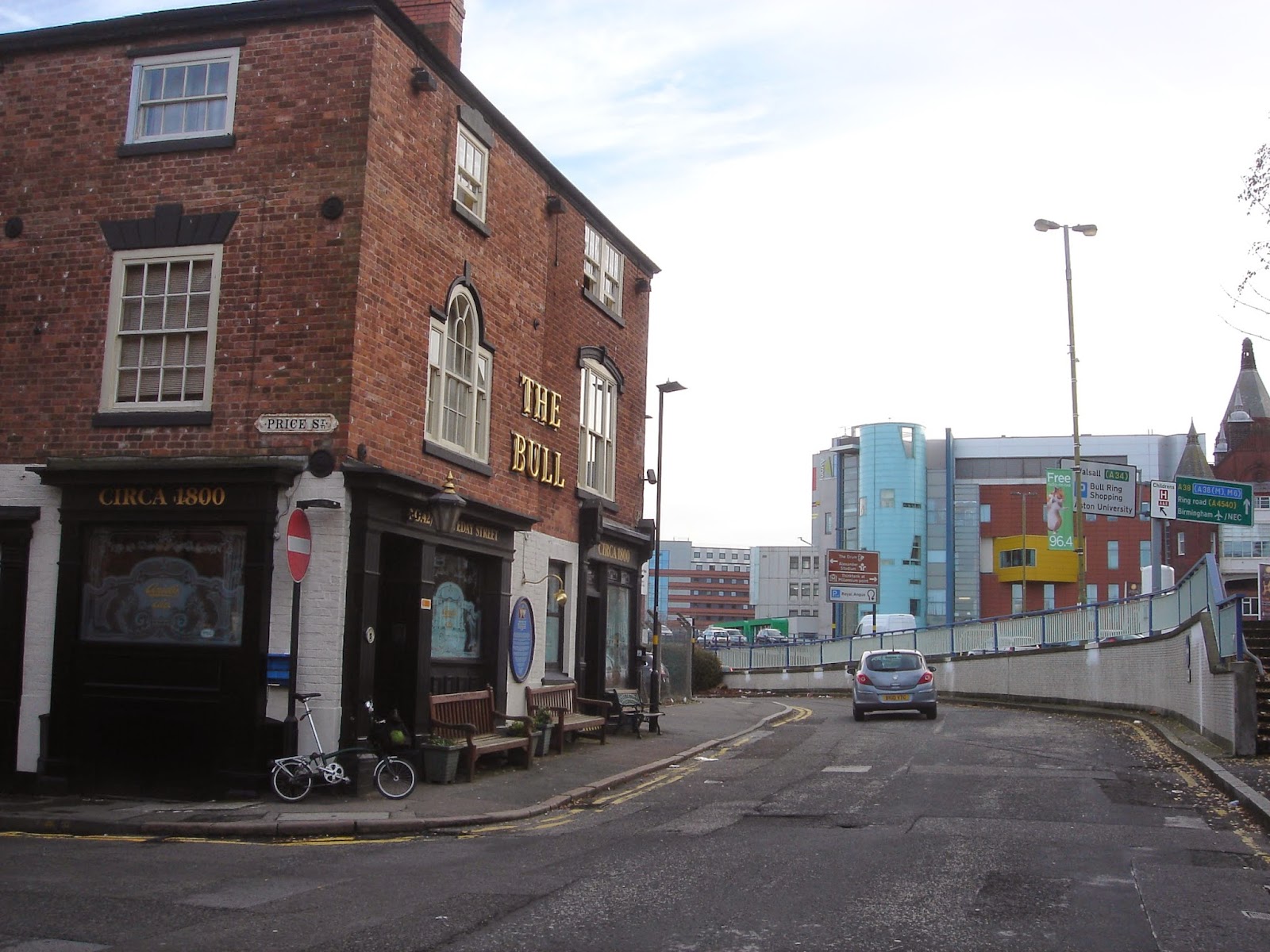 I've seen some of Mark's recordings of Old Country before but not all the episodes he's so generously let me have, and certainly not the ones with signing, nor the additional programme - a BBC interview. Pity that the recording ends abruptly mid-sentence before the end.

Jack's first and only appearance on the BBC: an interview with phone-in questions from Simon Baddeley on Vimeo.

Almost within minutes of streaming it on Facebook I got a message:


Iwan Bob Geldart - I was a cameraman on the show on the Vimeo link above. The show was Open Air shot at BBC North Studio B, Oxford Road in Manchester. The presenter was Susan Rae

Shoot forward 15 years ....Wet on the allotment this Friday. 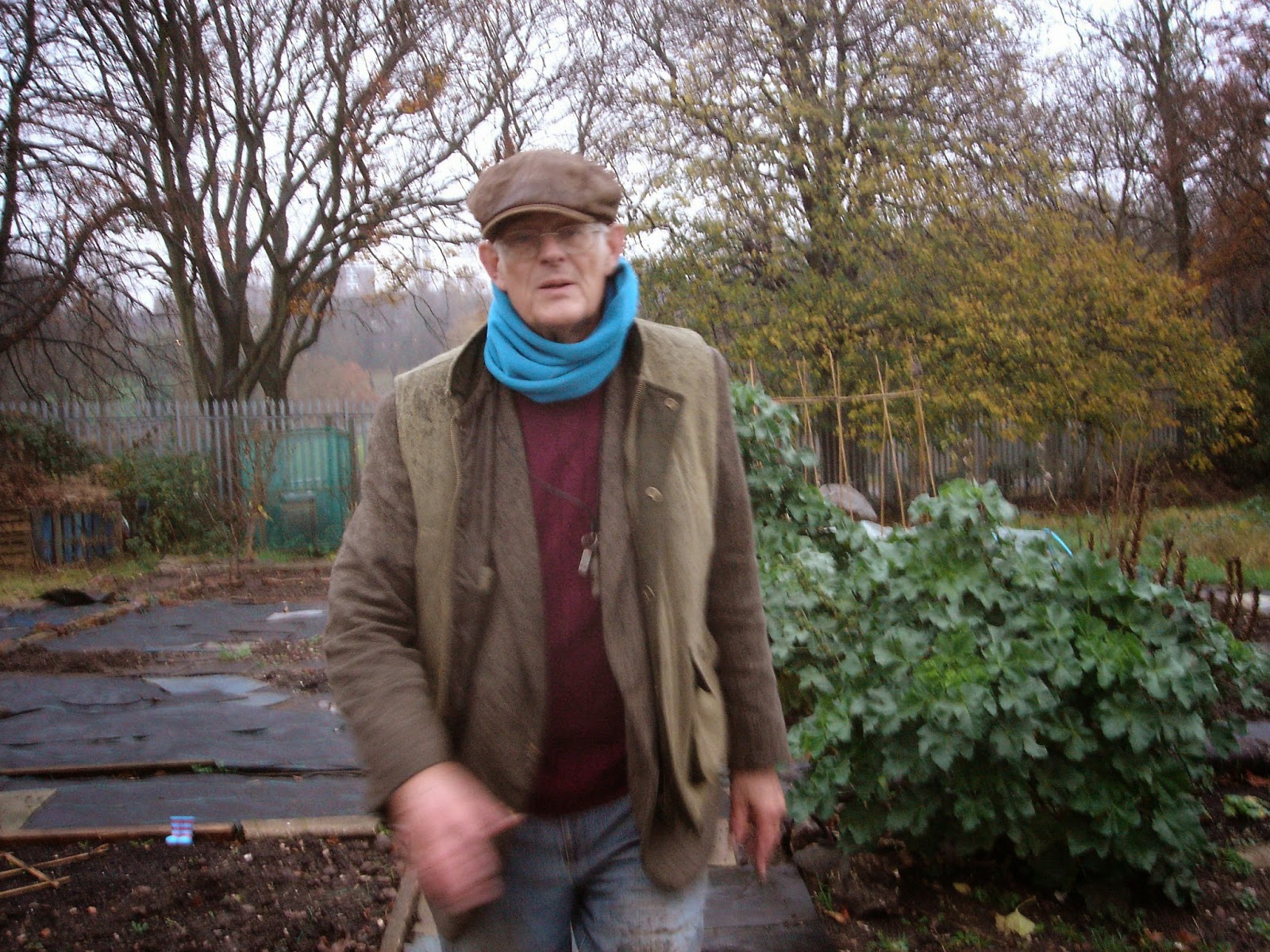 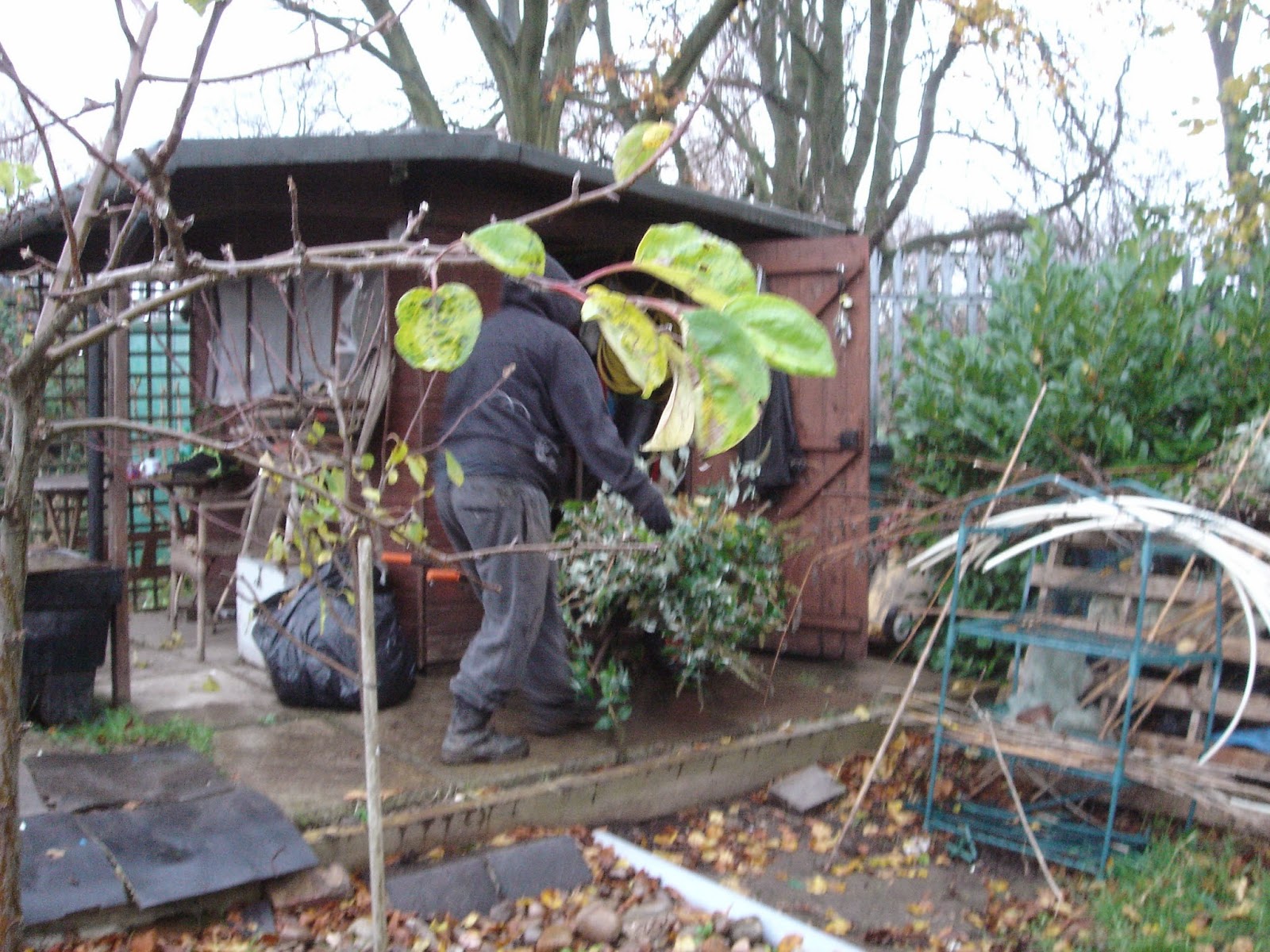 Not much to do but continue weeding and tidying. Winnie pruning too. 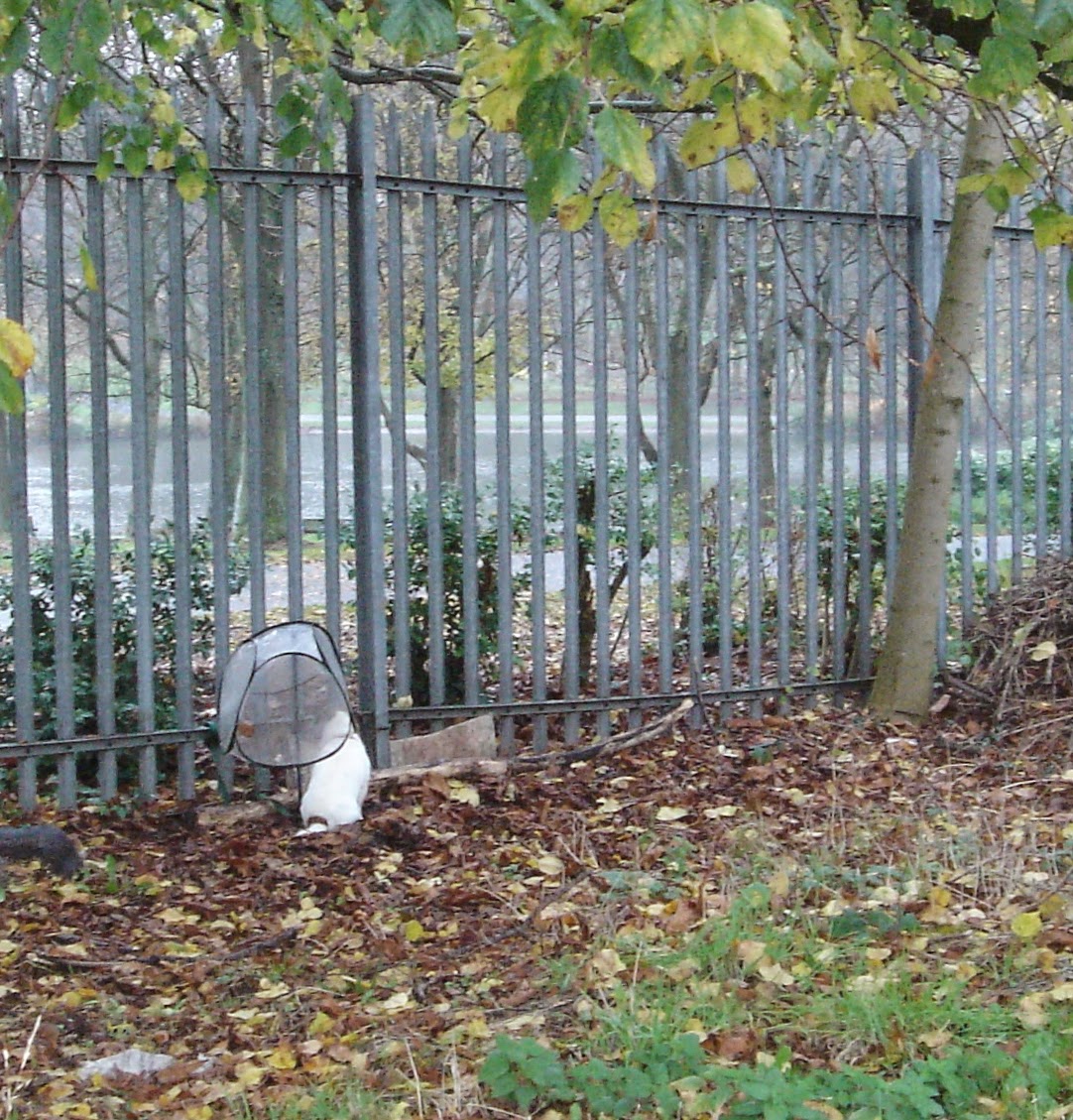 She found a plastic cloche and made it into a shelter for Oscar as he gazed at the park. I dug up enough potatoes for supper and harvested a pound of Jerusalem Artichokes - peeled, boiled and liquidised with a chopped onion and a few young carrot leftovers in chicken stock made a good winter soup.
*** *** ***
27th November....


Hi Simon and Lin. Rained off today maybe avrio also. As you can see from the photo's all the new and old beams are up which includes the two end beams.
What I did with the support beam on the house was to cut it back at about half the length which was well passed the rot and using one of the old better spare beams from the end of the balcony which I cut down to the size of the removed rotten beam...see photo... 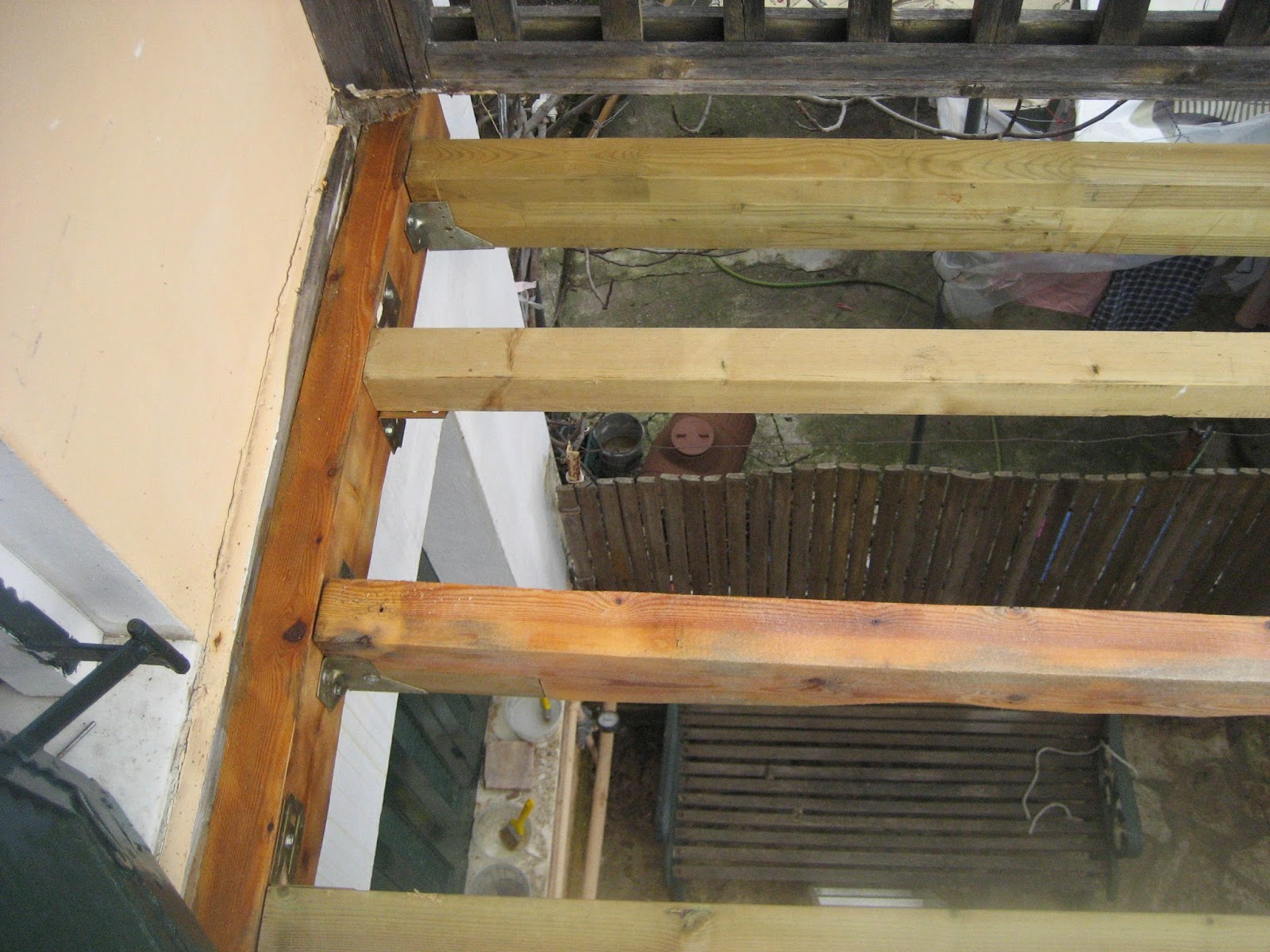 ....sanded it down and treated it then secured it back to the end of the house .This way keeps costs down for you and it is just as good as a new one anyway. Then I put back the removed beams from the top so now it is all complete .
Next step is to start with the decking when the weather improves. Hope all is well. Mark

Dear Mark That saved a journey to the north and with preservative it should be fine - especially as we’ll never again try to cover the balcony. Ridiculous that we were so focused on preventing it leaking to the plaka below, we ended up ignoring the consequences for the wood. Mr and Mrs Rot must have been overjoyed when we covered the balcony and worked so hard sealing it all the way round (:)) What was it like screwing into the wall to refix the ’new’ beam? Look forward to seeing the decking. Nice to think of all the firewood we'll get from sawing up the old decking. Its pretty wet and grey and chilly and often misty in the evenings here - typical English winter, otherwise all’s well. We’re babysitting Oliver this evening and I’ll take him and Oscar to the allotment tomorrow. How are you? Simon