Late November in the city


When I'm in another place it's autumn dusk in a Christmas city I see and almost feel. I like the bustle of Birmingham's small centre, police and PCSOs courteously directing pedestrian traffic...

...I skirt people jams, weaving among stationary cars, bumper to bumper - Oscar in the front box of my Brompton; a satisfying detachment from an unmadding crowd, we descend to the quiet of the waterways...
...where the dog jumps down, to lift a leg, before cantering in front and behind - a small white blob just visible in the ambient light of the town. I pedal a familiar route along the Birmingham Mainline, now and then a sound like an animal in anguish precedes the rumble of heavy wheels and yellow windows streaking above me, and along the glassy water of the canal.

Turning into the Soho Loop I'm passing warehouses and chimneys in silhouette, between the real and the reflected - Whistler nocturnes. 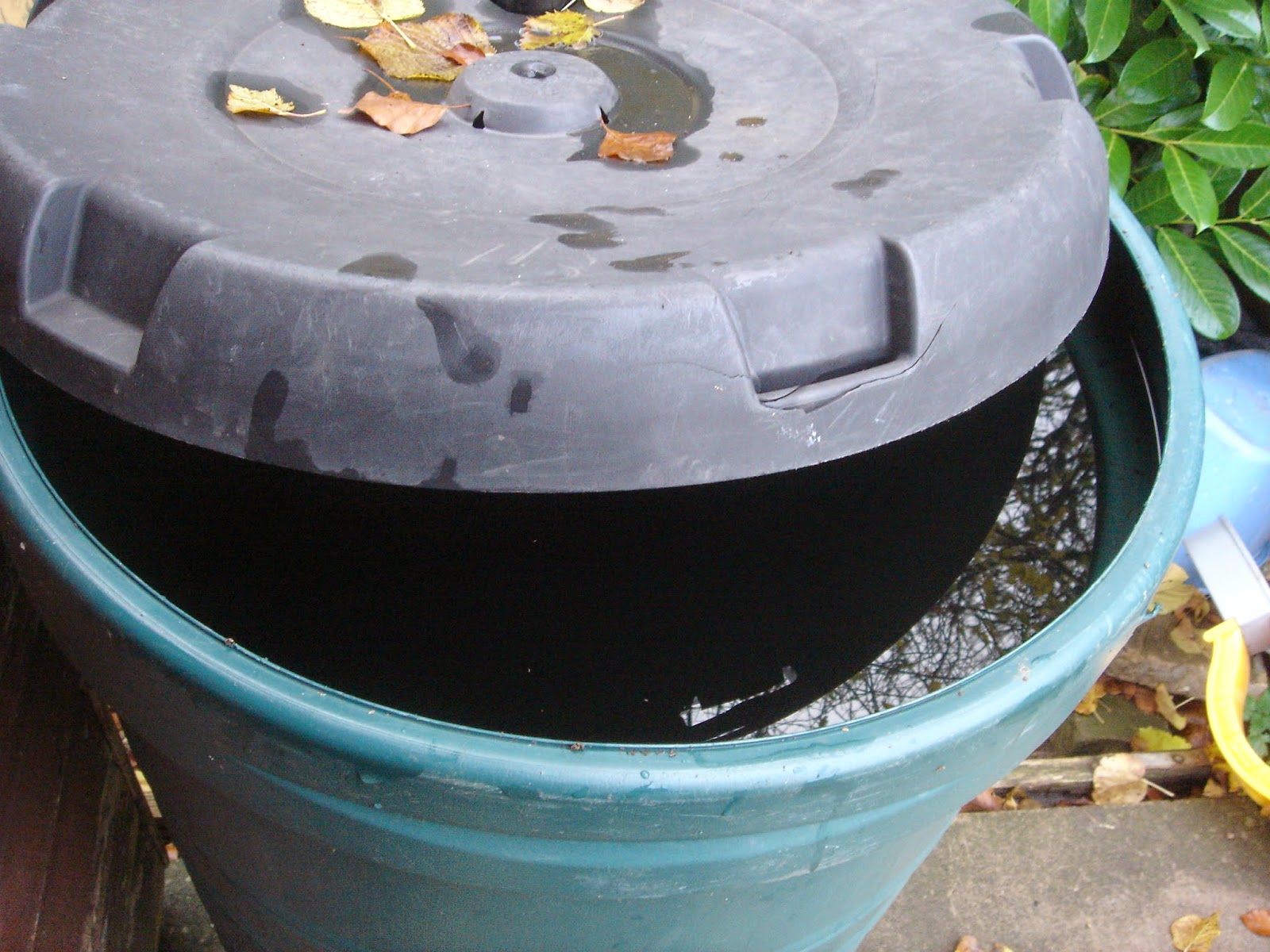 There's not much to be planted now and water is the least of my needs. My reading of an allotment website suggested winter peas and hardy broad beans - Aguadulce -  so I bought seeds from Hirons, up the road... 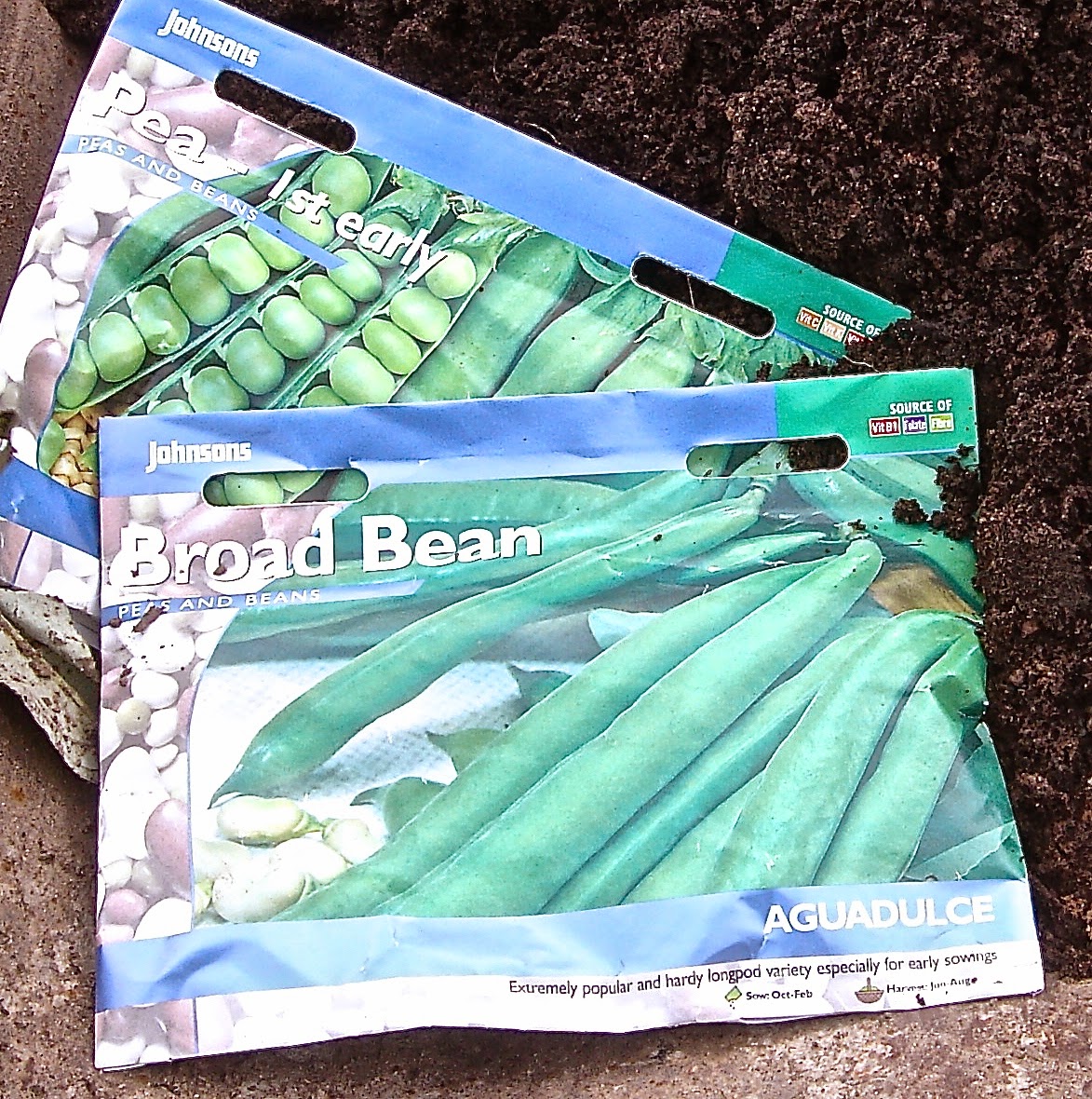 On Sunday afternoon I sowed the beans.  I dug through a bed which had held cabbage, what was left of them sending up clouds of white fly as I pulled the roots, forking over ground regularly dug already; larger pebbles removed, couch roots pulled, compost and topsoil added. My work brought up yet more stones and some couch roots - but far fewer. The ground here really is getting nicer. 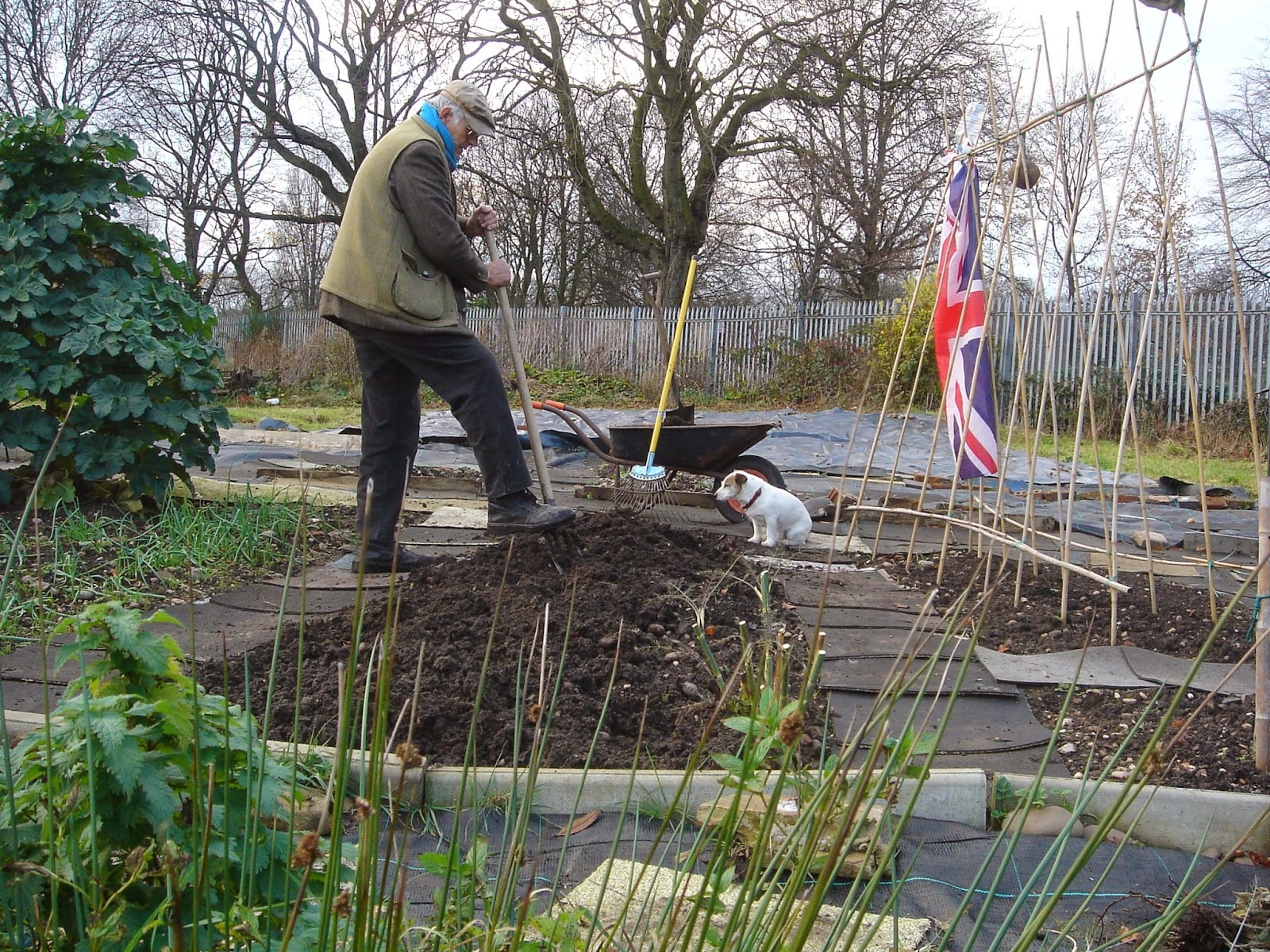 Mindful of things I'd not known until recently, I laid eight carpet tiles down the middle of the patch I'd dug - so as to avoid the slightest compression of soil in which I would be sowing. I coarse-raked then fine-raked the soil, then pushed the broad bean seeds gently into the ground, zig-zag pattern, as the packet instructions advised, about six inches apart... 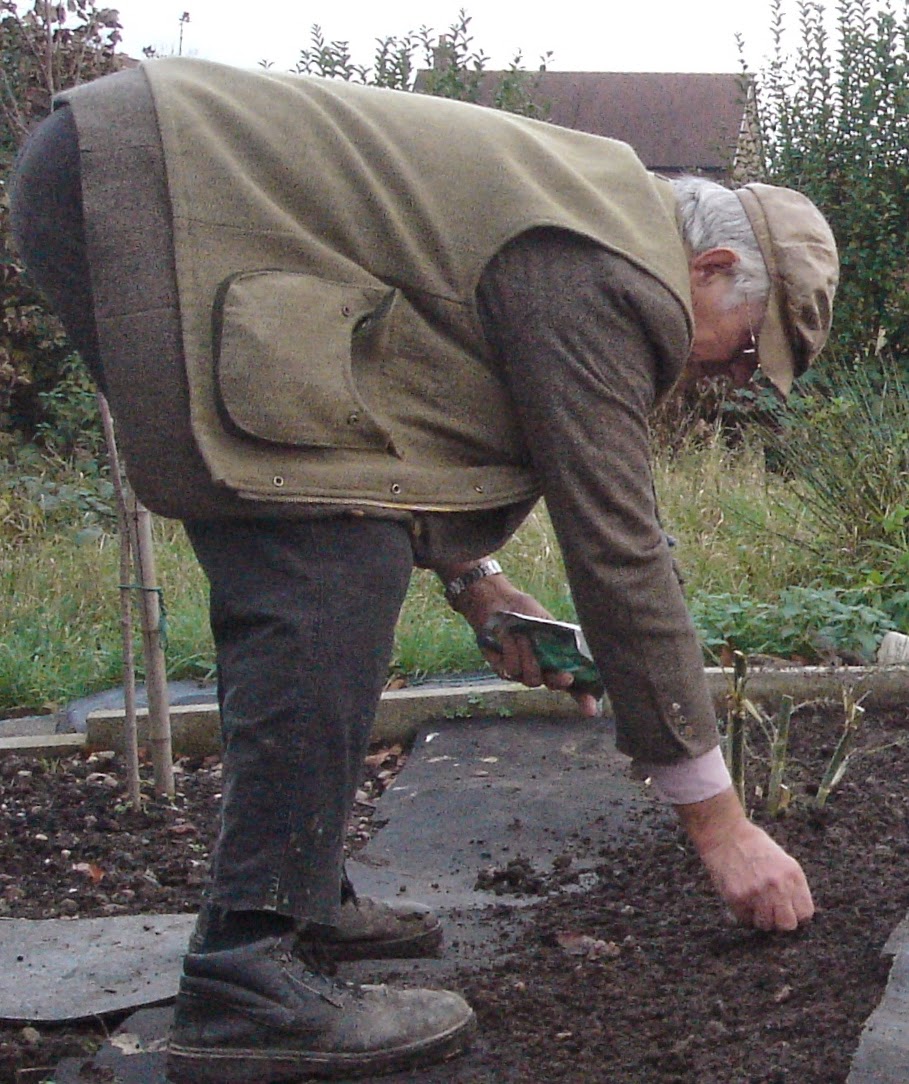 ...I wheeled down a barrow load of topsoil from my store in a builder's bag and laid it on top of what I'd sown, then firmed the seed bed with the back of a spade. Oscar watched the park from his place by the iron fence - barking occasionally at passing dogs. 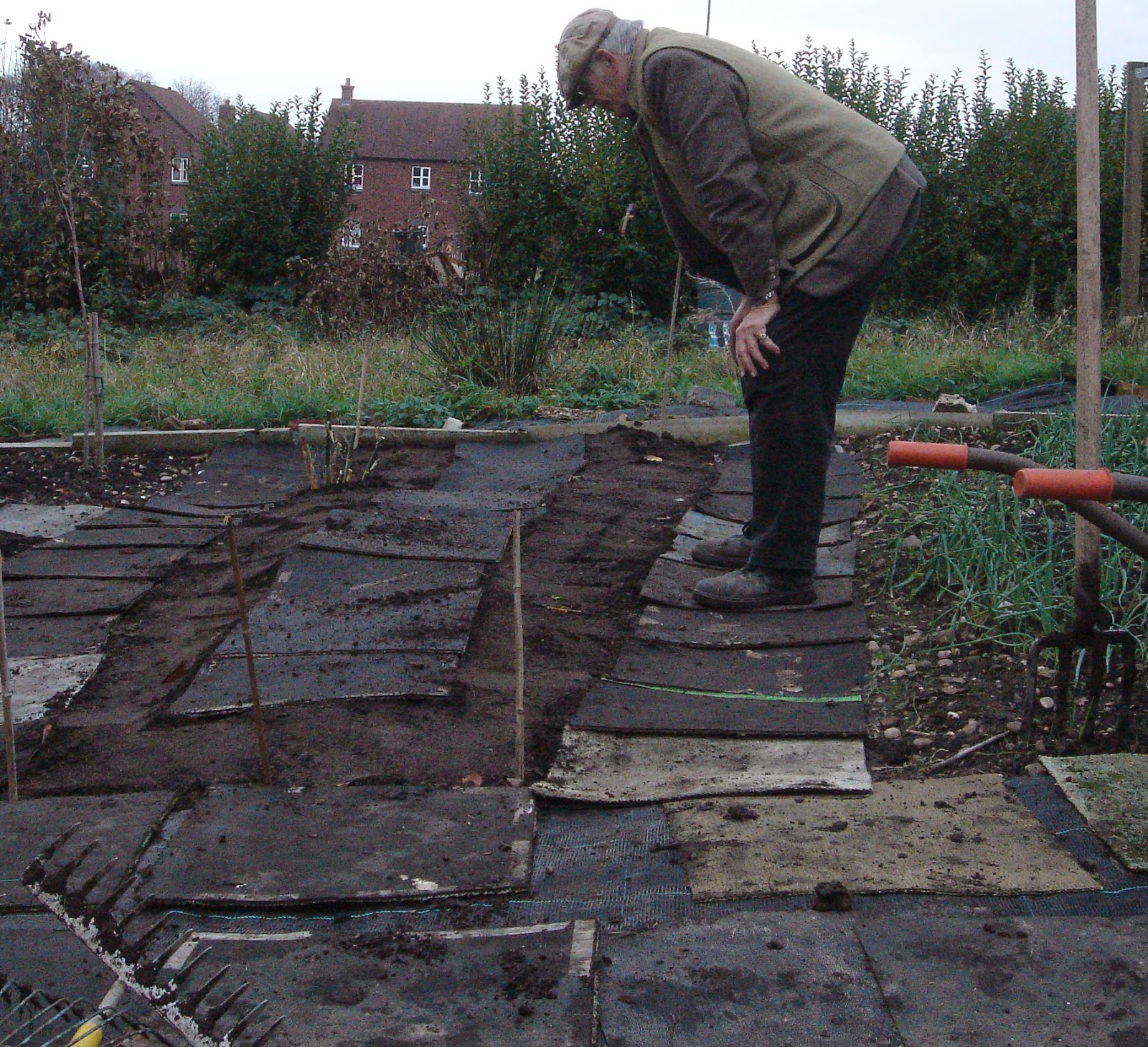 It suggests on the packet that beans sown now, should be ready in seven months - June and July 2015. 'Seedlings should appear in 14-24 days'. Later in the week I'll sow the hardy peas.
*** *** ***
Another pleasure - back to work as Hon.Sec of Handsworth Helping Hands... 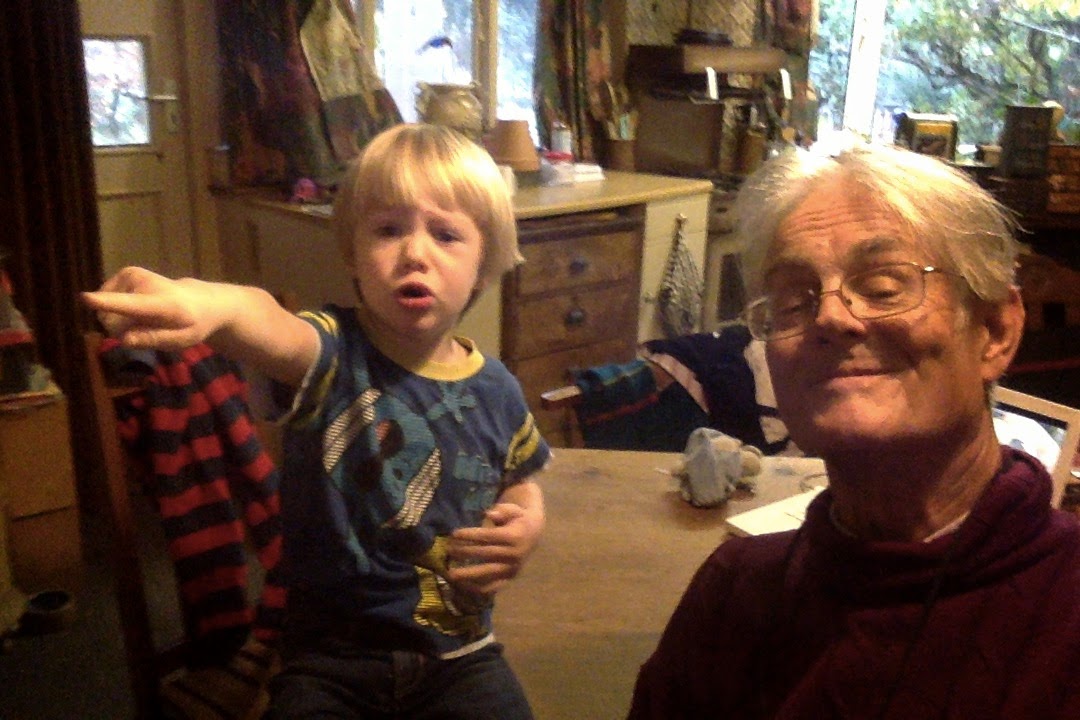 He slept in our room as usual in the cot beside our bed. I got him up in the morning, changed a nappy and made him breakfast before heading, with Oscar to Handsworth Park. A deal of some kind was going down as we approached the main gate... 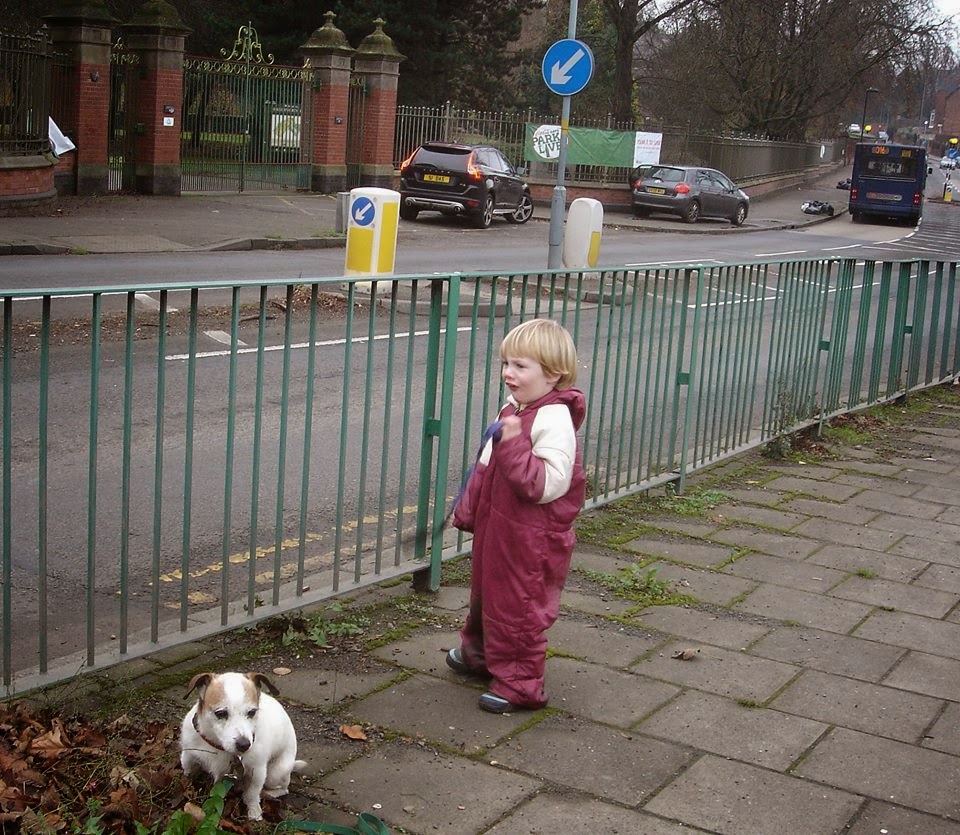 ...yet once inside we were among the birds - pigeons, a swan, ducks, seagulls, geese, coots and even a cormorant flying by showing that fish have returned to the lake. 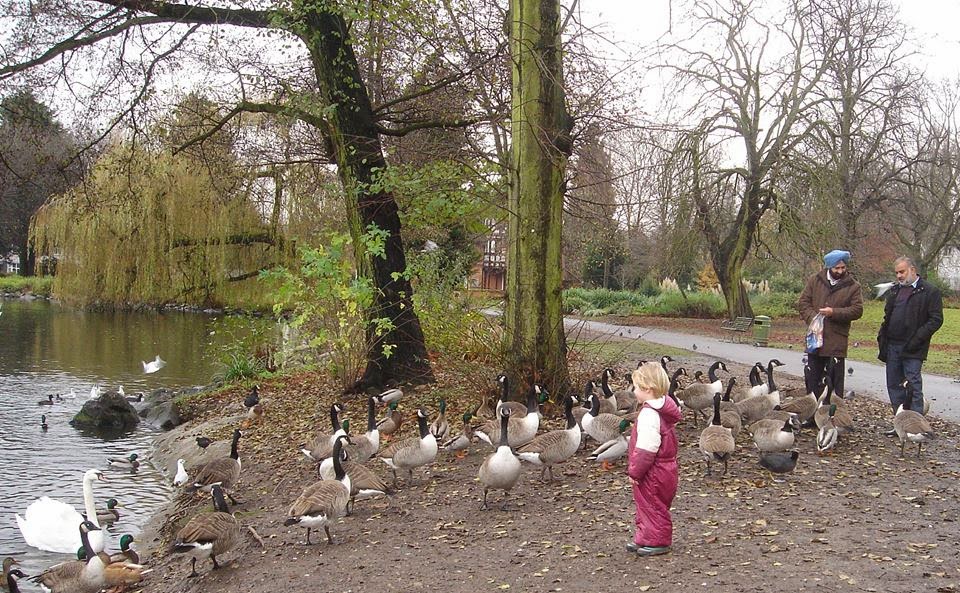 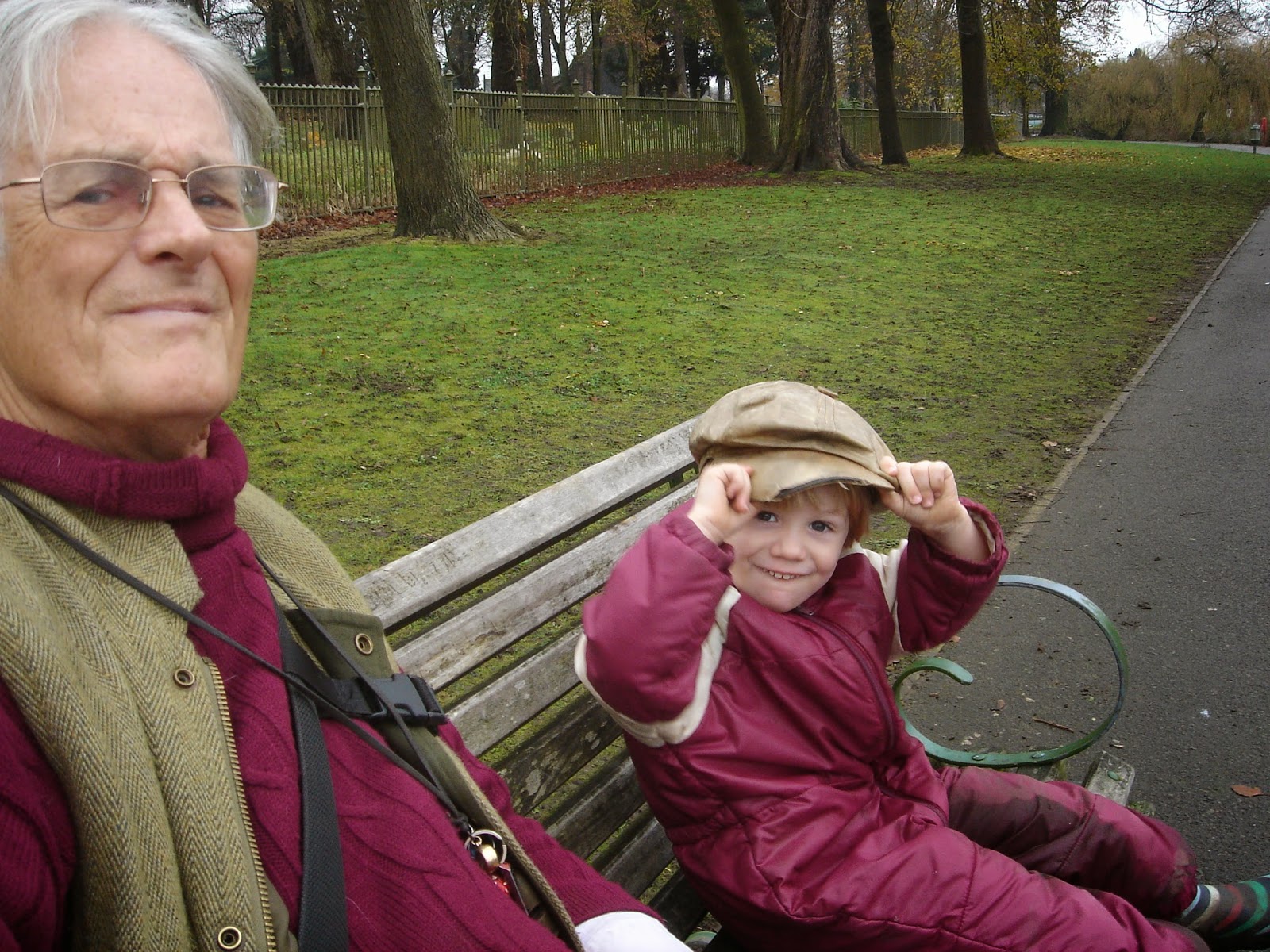 *** *** *** ***
PRESS RELEASE on the Ano Korakiana website about the future of the valued Health Centre at Pyrgi, Corfu - four kilometres from Ano Korakiana

PRESS RELEASE
On Tuesday, November 25, there was a meeting of the Coordinating Committee for the defense of St. Mark's Health Centre with the regional governor of the Ionian Islands.
Shared anxiety was expressed about the future of the health center and the need for more vigourous attention to ensuring proper delivery of primary and secondary health care across the island and the Region.
The Campaign Coordinating Committee calls on all citizens to continue and maintain their protest, on Monday, December 1st at 11:00 at the General Hospital of Corfu.
The Steering Committee


*****
Article in The Observer, Sunday 30 November 2014, about the still seldom told history behind the Greek Civil War Ελληνικός Εμφύλιος Πόλεμος...When 28 civilians were killed in Athens, it wasn’t the Nazis who were to blame, it was the British. Ed Vulliamy and Helena Smith reveal how Churchill’s shameful decision to turn on the partisans who had fought on our side in the war sowed the seeds for the rise of the far right in Greece today:


Late summer 1944 German forces withdraw from most of Greece, which is taken over by local partisans. Most of them are members of ELAS, the armed wing of the National Liberation Front, EAM, which included the Communist KKE party

2 December 1944 Rather than integrate ELAS into the new army, Papandreou and Scobie demand the disarmament of all guerrilla forces. Six members of the new cabinet resign in protest

3 December 1944 Violence in Athens after 200,000 march against the demands. More than 28 are killed and hundreds are injured. The 37-day Dekemvrianá begins. Martial law is declared on 5 December

January/February 1945 Gen Scobie agrees to a ceasefire in exchange for ELAS withdrawal. In February the Treaty of Varkiza is signed by all parties. ELAS troops leave Athens with 15,000 prisoners

21 April 1967 Right-wing forces seize power in a coup d’état. The junta lasts until 1974. Only in 1982 are communist veterans who had fled overseas allowed to return to Greece


....Greece commemorates frequently and assiduously. The key dates after 1821 are 1864 (the first major growth of the Greek state with the acquisition of the Ionian islands); the black mark of 1922 (when Greece was ignominiously defeated by Turkey in its feeble attempt to invade Istanbul); “Ochi” day, October 28th, 1940, when Greece rejected the Italian threat of invasion; and another black mark in the form of the civil war after the second World War. More recently, 1974 saw the dismissal of the seven-year-old military dictatorship.
Some of these are marked by activities to keep remembrance alive: “Ochi” day is habitually celebrated in Thessaloniki, Greece’s second city, with a presidential address. The suppression of the communist partisans in the civil war is the subject of annual pilgrimages to places of mass execution (such as Lazareto - Λαζαρέτο - island in Corfu bay...see also). This year, the 40th anniversary of the student uprising that brought about the fall of the colonels was widely celebrated. All of this raises the questions: what is to be remembered? Why?....