The village sculptor at work

As a generous present for a small favour my friend Jan has sketched the laic sculptor Aristeidis Metallinos, working from a photo lent by Angeliki Metallinos, his grand-daughter. It’s been good to get a note from the academic who wrote about him in 1985 – now Dr. Eurydice Antzoulatou-Retsila, since 2009 professor and Dean of the School of Cultural Studies of the University of Peloponnese in Kalamata – 300 kilometres south east of here. Her email spoke of meeting the sculptor in early 1982 ‘during my scientific fieldwork’. She thanked me for my interest and asked me to please let her know ‘if you think I could be of help in your research about Metallinos and his work.’...


I had felt, at that time, very lucky to have discovered him. At that period I was curator at the State Museum of Greek Folk Art in Athens and I had thought that his work could be the subject of a monographic museum, which actually his family created. I have not visited the village since then, although I was professor at the Ionian University for several years…speaking to my students about his work.

From me: …I am so delighted that I have heard from you as I can always imagine that sheer hard work in academia these days (I am semi-retired from Birmingham University aged 72) makes it almost impossible to respond to questions that are not about the work of the moment.
I have been trying to assist the family, in particular Angeliki Metallinos, the laic sculptor’s grand-daughter, to help put her grandfather a little more on the map.
But for your essay about him, Aristeidis Metallinos is more or less unknown even in Corfu; even in Ano Korakiana. That may be because his work, as you may know, was not only a commentary on the history and fast-changing pastoral economy of Corfu and his village but also involved strong, even pungent, illustrations of his contempt for the establishment – everywhere in the world but also closer to home.
This is perhaps still a sensitive matter long after the artist’s death…
I love the village where we now stay for under half the year. I am Philhellene, infected by my dad via his second marriage in 1949 to Maria Roussen, an Athenian… I lived with my mother and stepfather, but dad invited me to Greece in 1957 - a callow 16 year old. I made a four day train journey via Venice to Athens to be met by the lovely relatives; then sent on a tour of the great sacred places with a young Greek guide whose joy and pride and enthusiasm in what she showed us, is with me always. Except the Acropolis I’ve never returned. They live in my imagination free of the resented attentions of a million other admiring sight-seers.
The help I sought from you, if I may be allowed to pursue this, is whether the ribald, Chaucerian, erotic and subversive element of Metallinos’ work fitted with your impressions of him in 1982 as a laic sculptor associated with Corfiot folklore. There seem to have been two sides to the man as he admits in that ’double-faced' self-portrait
You saw his relief satirising the 'Saint of Preveza’ and perhaps some other pictures of his work...in this area that I am treading  softly.

I’ve had helpful advice from Dr Alexandra Moschovi at Sunderland University. I spent a half-day with her in Newcastle a few weeks ago. She showed me how Aristeidis’ work could in several cases be linked to contemporary events in the 1970s and 1980s. She reminded me that, especially in the 70s, there was still the memory of censorship from the Stone Years and that the sculptor may have been perceived as being a dangerous rule breaker, even risking the reputation of his village and family and others.
On the precautionary principle, I am assuming all this is not entirely in the past. The sculptor lies with his second wife Eleni in the churchyard of Eklisia Paraskevi just below the village, his ‘ museum' just visible through the cypress trees between the church and the village above.
The current plan I have agreed with Angeliki who has the support of her parents Andreas (son of the sculptor) and Anna…is to work on a catalogue describing each of the works. At some time in the next two years I would greatly appreciate being able to share our progress on this with you and in the meantime I hope our research into Aristeidis Zach. Metallinos has your blessing.
I hope you will forgive me using your first name. There is no disrespect intended and I am well aware that without your academic reputation we would not even have been able to get a small piece about the sculptor in Wikipedia. Thank you so much for coming back to me. Kindest regards…

*** ***
We ate a late supper in Handsworth on Wednesday evening, Guy, Emma, Amy, Richard, Lin and I around our kitchen table... 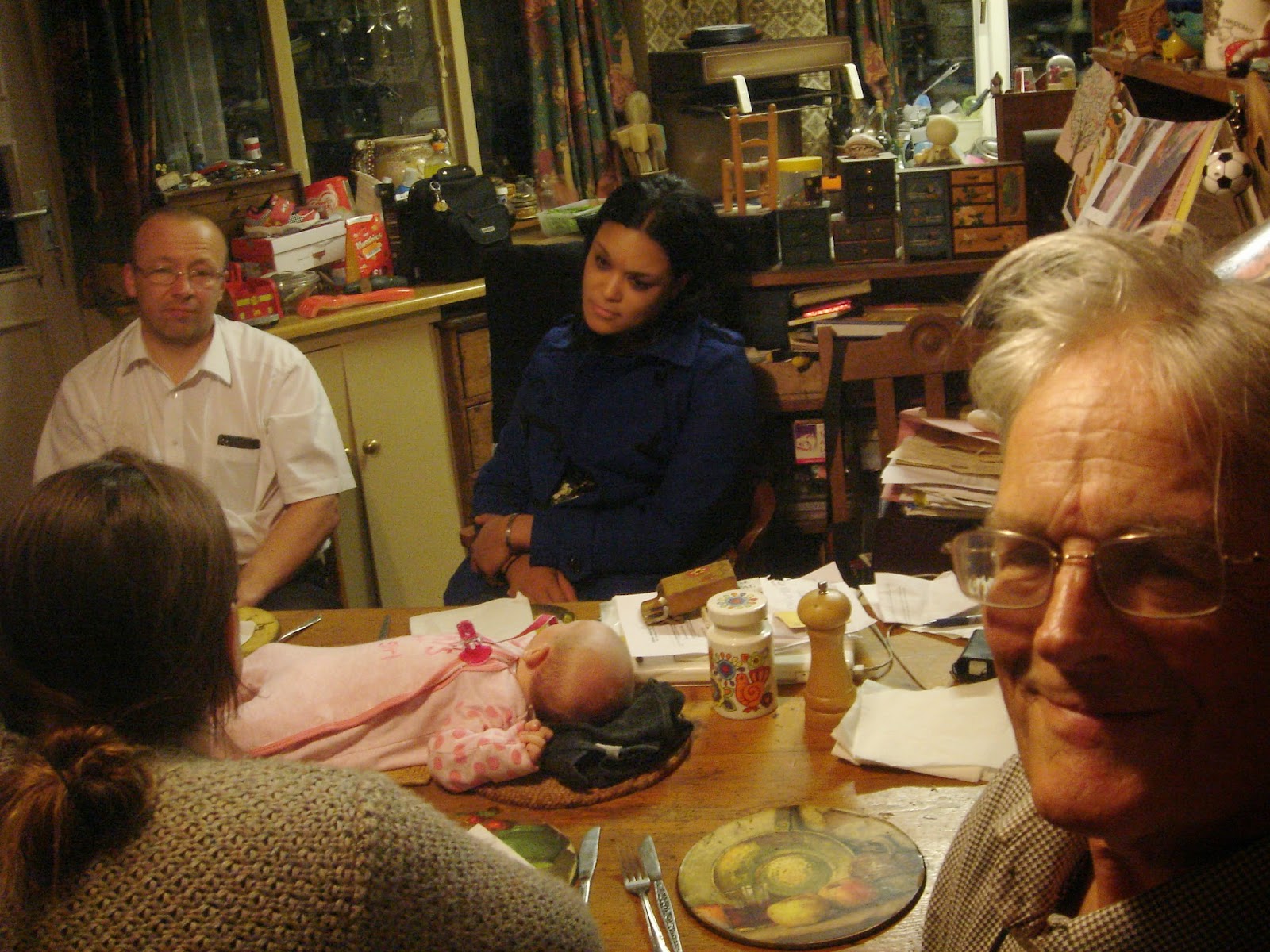 ...Oliver has finally gone to sleep upstairs in our room. In the morning he’ll wake to climb from his cot and into our bed. But nanny and grandpa will have left. Downstairs new Hannah, is for the moment in the centre, before Amy gets her to sleep in the bouncing cradle, one with a battery that makes it vibrate. When that’s not enough Guy puts his smartphone playing a modern lullaby – white noise - beside the cradle - the same comes from radio telescopes probing galaxies.
Supper over, all packing done and case weighed to regulation 20 kilos, tickets and passports checked, we with Guy to Digbeth coach station. Two hours to Luton. A crowded wait in long queues of familiar strangers. A flight at dawn and a landing through cloud into a rain-swept world where we picked up a car and drove up, via Lidl, to blessed Ano Korakiana. It rained and rained. The second night I woke to thunder and lightning. Lin stood at the French windows - a woman in black against its constant flicker. Rain pounded our tiles, brimming the gutters, flowing over their length in shining streams, flowing over the balconies to splash on plaka and concrete below.
In the sunny morning we continued tidying the garden; pruning and bagging a three month spread of Bougainvillaea and Wisteria, and, with extending loppers bought from Technomart near Gouvia, cutting back the tops of the lemon and orange tree where they grew higher than the balcony.
That wood balcony that affords such views of Corfu, the sea and mainland Greece, is crumbling.
.No Greek would regard it as anything but a temporary structure. To halt the effects of time we've bought Resoltech - a kind of archaeological wood treatment that demands careful application.
Instructions are on the internet and we've consulted friends here who have used it. 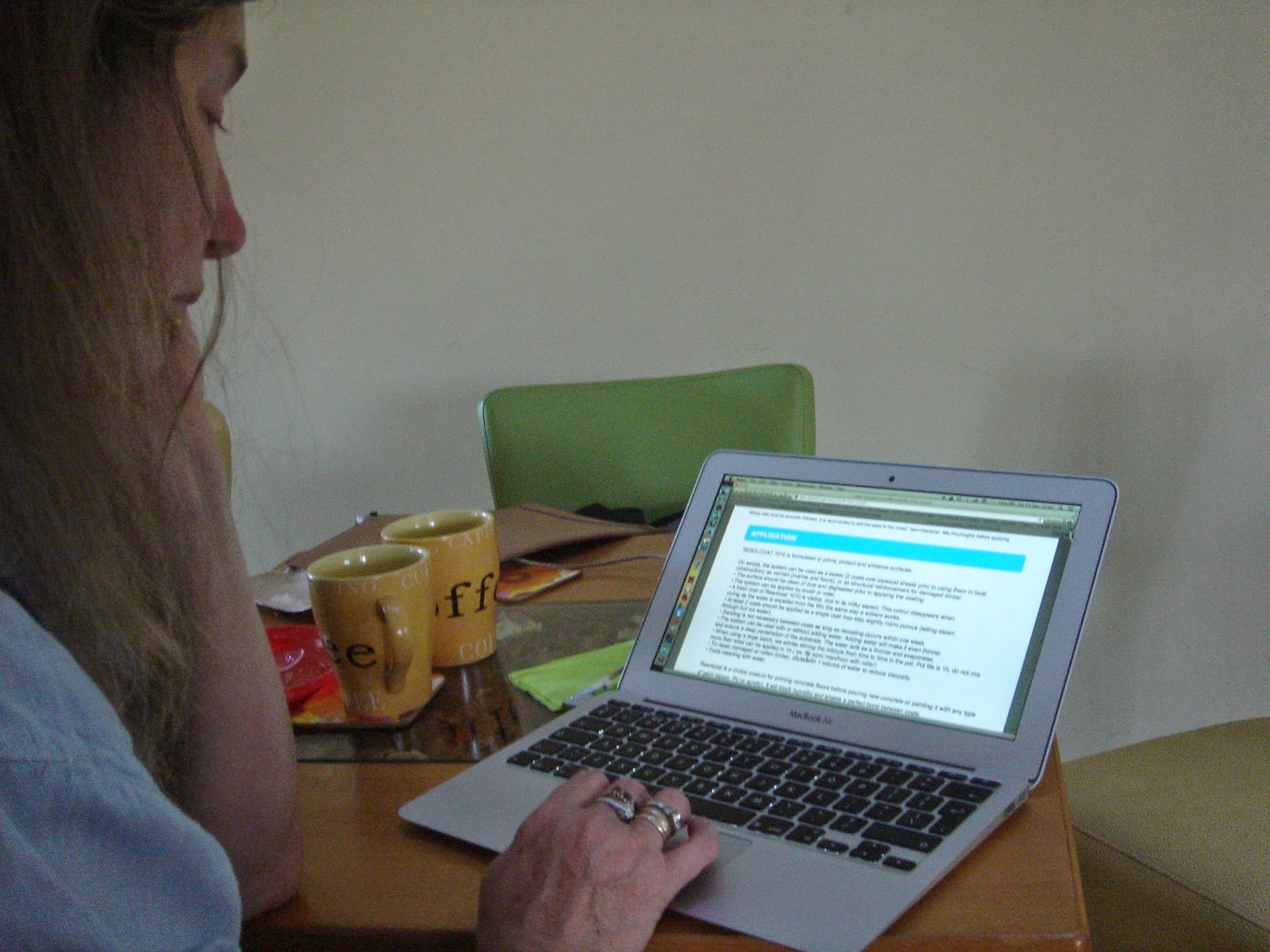