My stepsister and her husband, Eric, having stayed with us this last week: 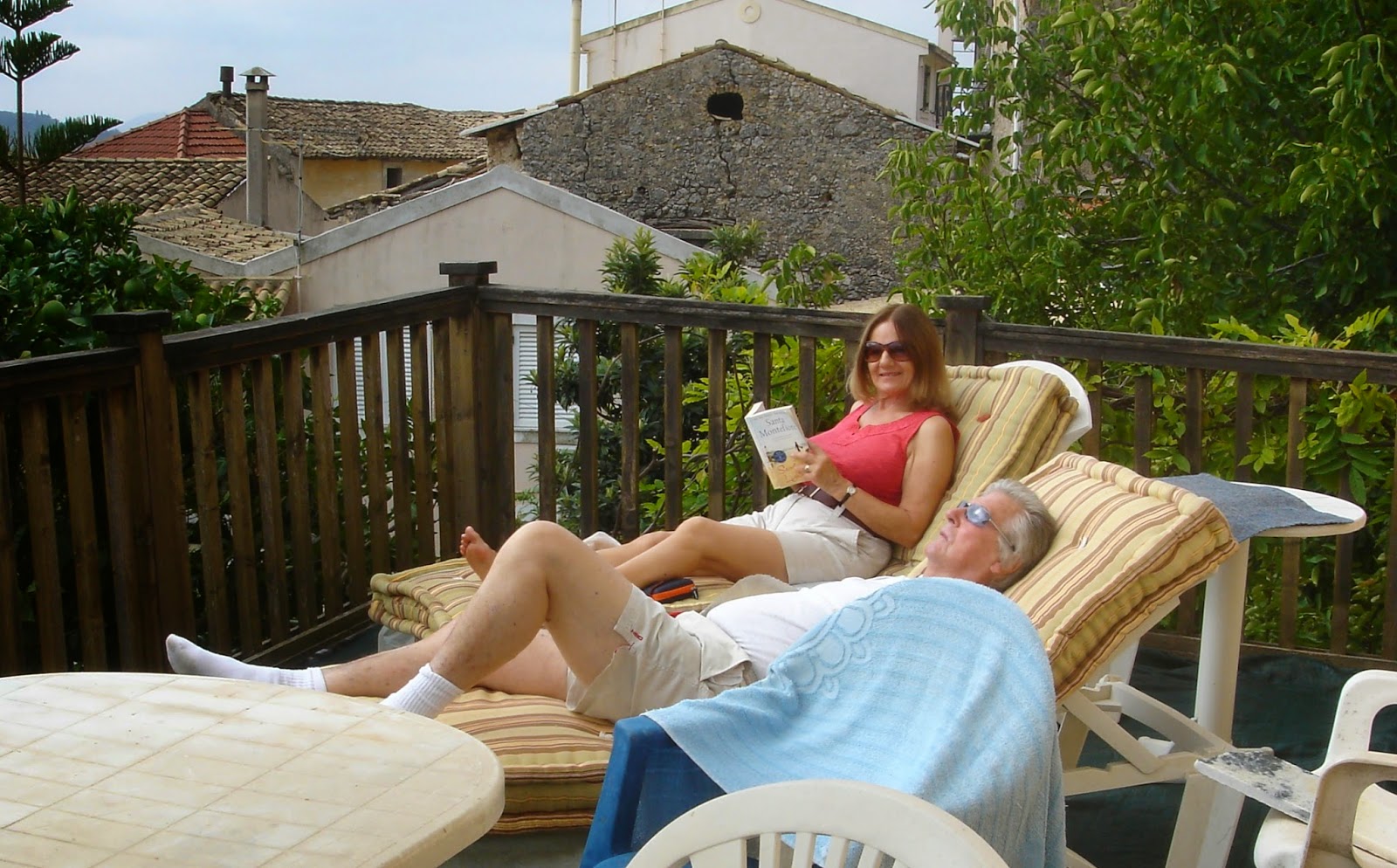 Dear Fiona. I'm enjoying a large filter coffee in Plous Bookshop in town having dropped you two off at the airport. Hope it wasn’t too hectic and that you are home safe and sound. I guess your flight will be overhead any time now. I think I hear its rumble.
I’m so pleased you decided to visit us, and would like to think that, even with your immaculate politeness, I detect a sense that you really did enjoy yourselves - wasps and snails apart...We did - without too much bustle - get a lot into our week together, even though we didn’t climb Mount Pantocrator, visit Old Perithia, The British Cemetery, sail the boat, or visit the Aristeidis Metallinos Museum or go to Albania for the day or climb up to Angelokastro! But we did take a boat for a picnic on Mouse Island, watch the planes landing and taking off from Kanoni, visit Mon Repos in the rain, eat at George’s, at San Stephano, at Strapunto, walk the streets of Corfu city, swim off Dassia Beach and gaze at the remains of the Club Med site where you holidayed in the 60s; walk the village, meet our friend Cinty, stroll and nearly get the car stuck at Avlaki beach. We bathed too at Paleocastritsa, struggling with a sunshade in a warm sea wind...

...and went to the Monastery there; visited tourist-jammed Kassiopi, strolled the misty streets of Sokraki after climbing the 29 (or is 27 or 28?) hairpin bends from Ano Korakiana, descending via Trompetta with its panoramas north and south over the island, and took the caique that plies between the Old Harbour and Vido Island where we met the rude waiter Dimitrios at Taverna Menios (I promised to name him!) and I swam off that pebbly little cove as we watched the big cruise liners leaving the narrows. Love to Eric. It was great to get to meet him for more than a passing handshake. He's a fine man, kind, generous, and funny and looking enviably good as an ‘old man’ like me - with the requisite amount of shared grumpiness to put me at my ease.  Love to all the family. (Send us some photos of your sojourn on Corfu). That poem I mentioned by John Pudney...

Do not despair
For Johnny-head-in-air;
He sleeps as sound
As Johnny underground.
Fetch out no shroud
For Johnny-in-the-cloud;
And keep your tears
For him in after years.
Better by far
For Johnny-the-bright-star,
To keep your head,
And see his children fed.


Dear Simon. Thank you very much for your letter and the right use of my name! Actually all my international friends like this version. I am deeply touched by your philhellenic feelings. Greece needs distinguished friends like you to survive nowadays. Your thoughts about Metallinos and the 'background' concerning his ideas had occupied myself too and I was wondering what was really happening there. having some ideas parallel to yours and thinking that research was needed to go further. So, I am glad that you are doing it. I think it has to do with ‘mentalities’ and ‘stereotypes’ of local behaviours within the framework of a local community influenced by the general 'clima' of a certain historical period, with all its exaggerations (very usual for a Mediterranean hectic milieu). It will be my pleasure to hear more about progress….All best greetings, Eurydice

Dear Eurydice. Yes that’s the name we learned in school (:))
Thanks for your most flattering complements. My area of academic work for thirty plus years has been local government in its many forms and in several countries. My specialty has been the subtleties of the working relationship between politicians and administrators - relationships that make, or fail to, make governmentI am a social anthropologist in my initial training and inclinations, but now I suppose a generalist and journeyman researcher into things that intrigue me.
I really enjoy digesting your reflections on the laic sculptor and will, with your permission, continue to put extracts that capture these in the fragmented narrative I call 'Democracy Street’. I will stay in touch and share further thoughts and pass on further questions if I may - those that arise from your reflections and others arising from mine. Gradually we learn more. Kindest regards, Simon
208 Οδός Δημοκρατίας, Άνω Κορακιάνα 49083, Κέρκυρα, Ἑλλάς

**** ****
Meanwhile back in the UK, an exchange, necessarily kept anonymous, re trouble between a friend, expert in monitoring the probity of credit unions, and a particular credit union official with which they were asked to be associated I’m unclear about the letters on the list ‘b’, ‘e’, ‘g’. Perhaps they refer to clauses in that CU’s constitution. The letter copied to me:

23 Sept...my reply to my beleaguered friend:


The charges against you are absurd, which is perhaps why it has been so difficult to obtain them.
Words and phrases have been spun to make honest, and indeed required, monitoring and reporting pre-requisite to your official role in the CU, look quite the opposite.
Had you not carried out the actions which this CU has turned into accusations and recriminations of  maliciousness and impropriety - you would have been acting illegally and improperly.
For the derogatory term ‘divulging’, read instead ‘imparting' or ‘reporting’ - and, in this case, ‘reporting' information to which you, in your role, were entitled to and needed to carry out your work for the CU - information which you imparted under confidential conditions to a regulatory agency concerned with the conduct and management of the CU.
You were doing nothing less than the job that was required of you when appointed to it.
The use of the words ‘malicious' and ‘knowingly' as applied to an agent of the CU carrying out their required duties is slander.
The use of the term ‘knowingly’ linked to ‘maliciously’ is an oxymoron. Of course you made your reports ‘knowingly'. These terms are linked to intensify the accusation.
The charge of 'actively working against’ contains similar oxymoronic intensifiers, demonstrating the weakness of your accusers’ position.  What difference does ‘actively’ make to the strength of these allegations?
Your accusers are angered and embarrassed that you did your duty in the role to which they and others elected you.
Can I say more? Lots, but I’m keeping it short. I wouldn’t even grace this behaviour with the term ‘vendetta’. You are being set up to face charges from a kangaroo court whose members seem unwilling to afford you due process. They hold over you charges which ought, rightfully, to be directed at them. It is your accusers who are bringing the CU, and indeed the whole CU movement, into disrepute by their arrogant and ill-judged actions...Instead of taking advantage of your skills, experience and integrity in managing the affairs of a Credit Union, certain key officials decided, not just to ignore your cautions about their procedures, but have add insult to the injury by, in effect, accusing you of ‘doing your job properly’. Best, Simon

*** *** ***
Several villagers in Ano Korakiana have sought my views on the Scottish 'referendum' in most cases, knowing the poll result before we did, having no Wifi or TV at Democracy Street. I asked my politician friend from Walsall, Dave Church to share his opinion of the result, which pleased me more than him. I'd been unaware of 'DevoMax'…


His letter on 19th Sept…Simon. The 55%-45% referendum result was much what I expected (in the pub I gave it 53%-47%) given the desperate promises made by the leaders of the 'No' campaign. Although opinion polls suggested a tighter result, it has always been my view that 'undecided' voters who do then vote, tend to favour the 'status quo' option.  It was I think ironic that Cameron refused to include the 'DevoMax' option on the ballot paper but then had to promise this to avoid what he thought could be a 'Yes' vote, yet the end margin suggested that this may not have been necessary. In a sense it turned out to be a referendum between Yes and 'DevoMax' so the 'No' campaign lost at least to the extent that in the end there was not a 'status quo' option.
Although I personally favoured a 'Yes' vote, I must admit that this was probably because of my "anti status quo" outlook as much as it was my hope that an independent Scotland could demonstrate a fairer society. In many ways the result could not have been better. Independence for Scotland could have allowed a 'no real change' situation for the rest of the UK, but the promised level of devolution will I think require significant though to be given to the democratic structures here. If we could extend this further than merely excluding Scottish Westminster MPs from voting on issues devolved to the Scottish parliament, there could be real gains towards real democracy.
Look forward to meeting in November. Dave