Eiderdowns hang from our Handsworth washing line. No Ionian wind to sun-dry and ventilate them. Instead I watch carefully to bring them in if the clouds grown darker and heavier. 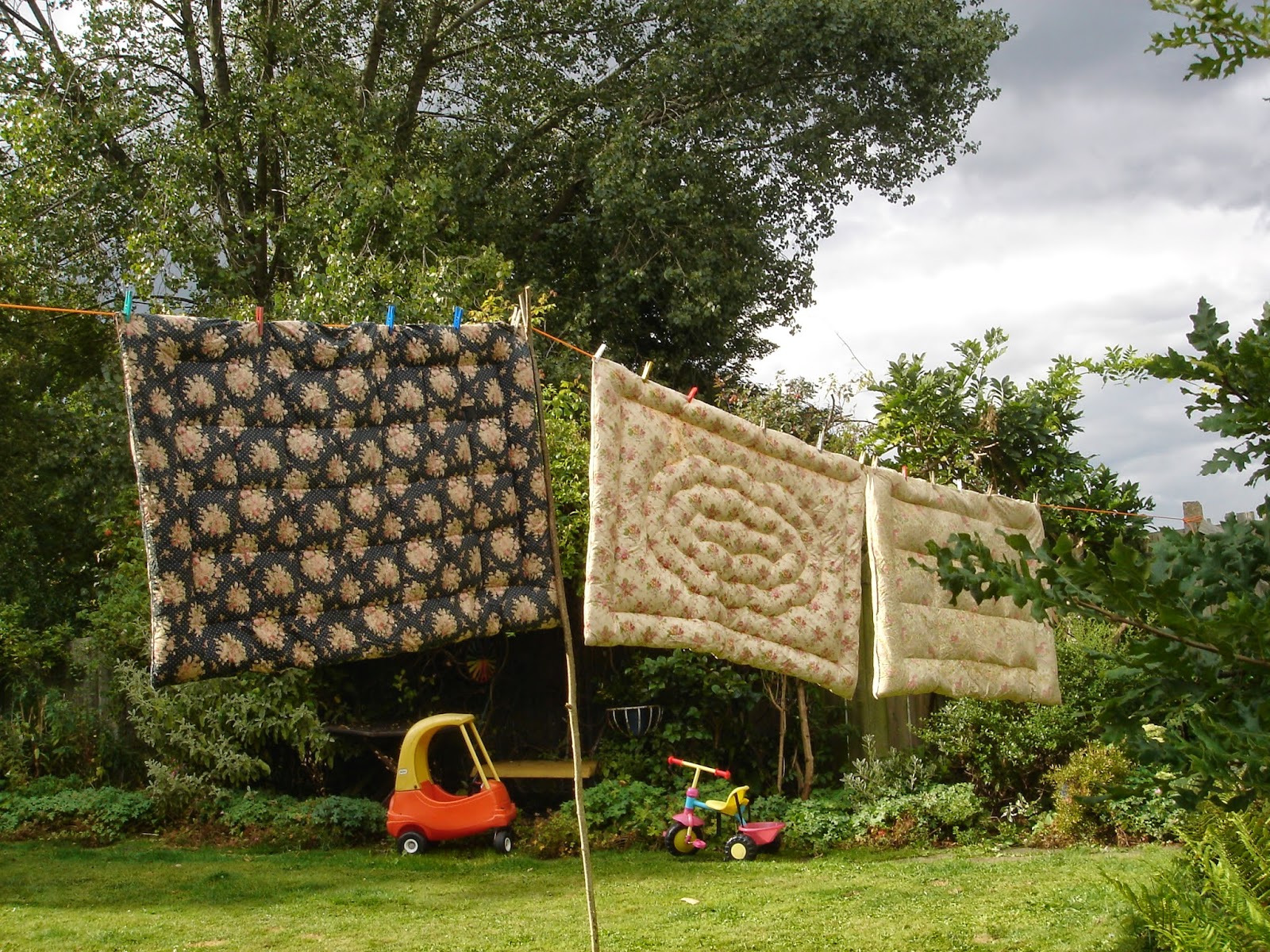 They came from Rock Cottage; in sacks of soft things I'd was tempted to skip when Adam and Jack cleared the cottage garden of building waste two weeks ago, but which Lin insisted on bringing here to wash, dry, fold and store, cleansing them of the overwhelming smell of old damp.
"The eiderdowns are feather-filled. They won't go in the washer" said Lin "Air them"
I've smelled them. The airing seems to have worked. They're lovely. A crime to throw away. The washing line's supported with one of the two hazel poles with V-ends that I lopped - one for us one for Denise - and brought back to Birmingham from a hazel coppice in our garden at Rock Cottage. 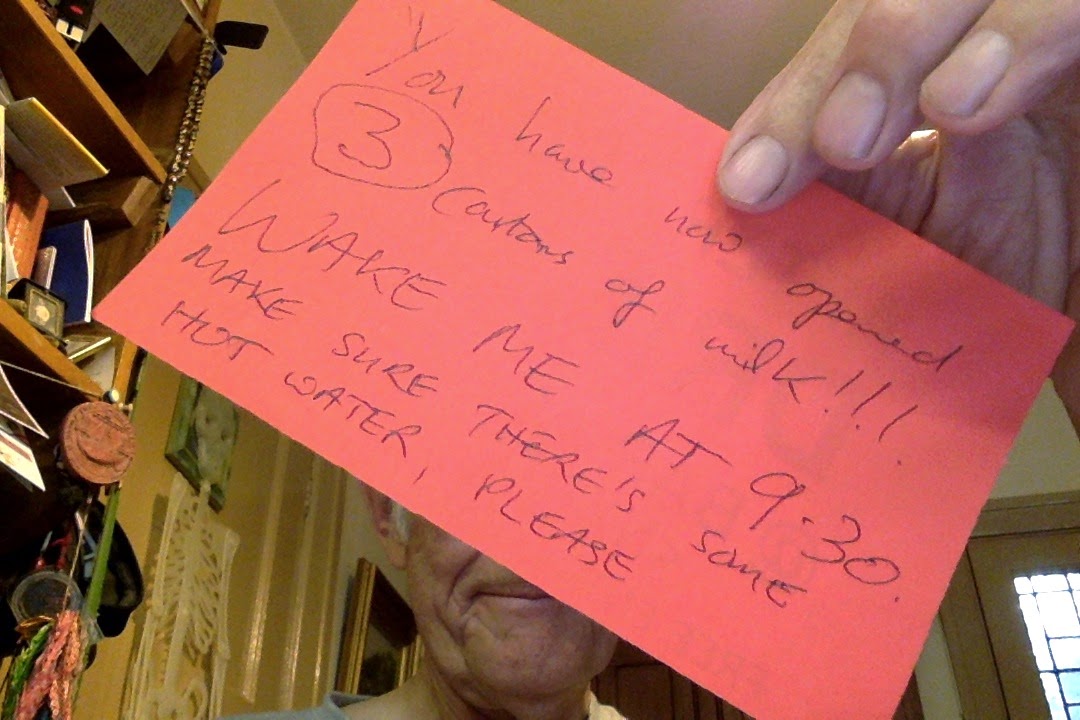 My attempts to win sympathy on the basis of age-related absentmindedness has no traction with Lin.  She knows very well, that how many milk cartons are in circulation in the kitchen is low on my 'to do' list.
"What forms of annoyance do you reserve for genocide, people trafficking, child abuse...or Adolf Hitler?" I plead, uselessly.
These things matter to her, she is Kali of Small Things; in especial abundance while Guy and Amy, Oliver and our new born grand-daughter, live with us as their own home is extended - work, as might be guessed, is lasting longer than their builder projected.
To choose one of many tasks more or less at random, I'm tidying up the gates and doors at the front of our house, starting with the hefty alleyway door that, after old repairs to an original gate made 80 years ago, is falling apart.
"Just disassemble the tongue and groove and remake it" says Lin.
The door fittings are rusting into rot. Lin's part right. It could be recovered, but at what time and effort given all the other jobs to be done? If it were anything but a purely functional gate I'd give restoration consideration. I took the whole door - the flaking paint layered rusty T-hinges cut through with the angle-grinder, the remains levered off until I could get a heft on the old slot screws - to a local carpentry shop. I also removed handles and a couple of cabin hooks I'd added about twenty years ago, and with Guy's help, dragged the old gate to the HHH van and took it to Atlantic Joinery on Hamstead Road. I pay for this use of the project's vehicle with a fuel donation - all registered in the van log.
"Make me a gate like this but slightly lighter, Mr Bogal"


A week later, for £182 I have a new raw door made of treated wood, ready to be primed, undercoated, painted and re-hung wit a new pair of sturdy galvanised T-hinges from Doorfit in Hockley 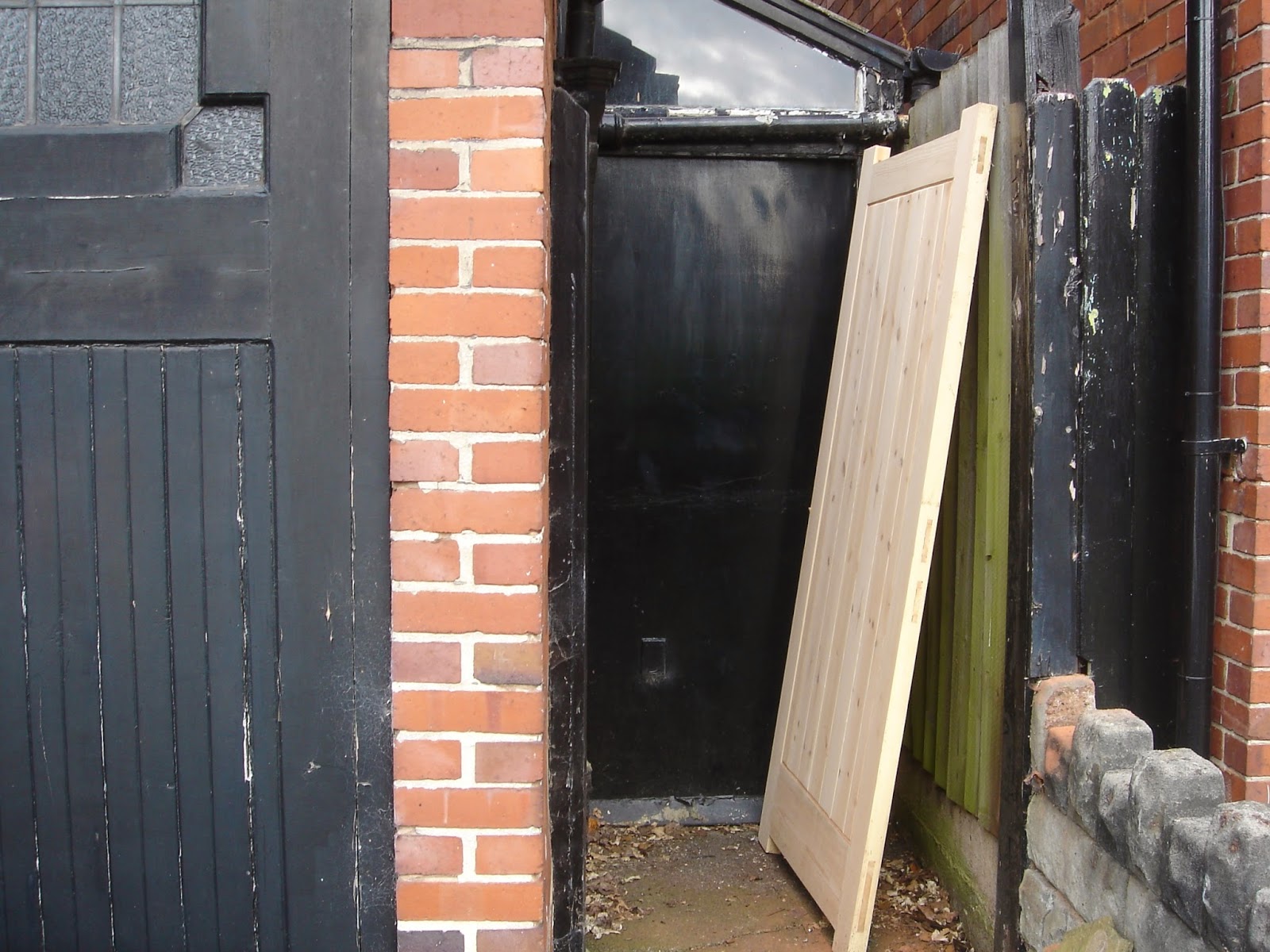 Once that's in place I'll clean up the garage doors, sand, undercoat and repaint them.
"£182!" said Lin "They saw you coming"
I like the feel of the new gate. I like imagining how the whole will look when the work is done. But it'll be at least another week with all the other things we have in hand - not to mention the constant duties of grand-parenting.
Things are happening at Rock Cottage. The HHH committee agreed to let me borrow the van to collect the 'old' kitchen from Guy and Amy's house and take it down to Lydbrook where Adam and Jack borrowed the relevant parts up Bell Hill to install in the kitchen at the cottage 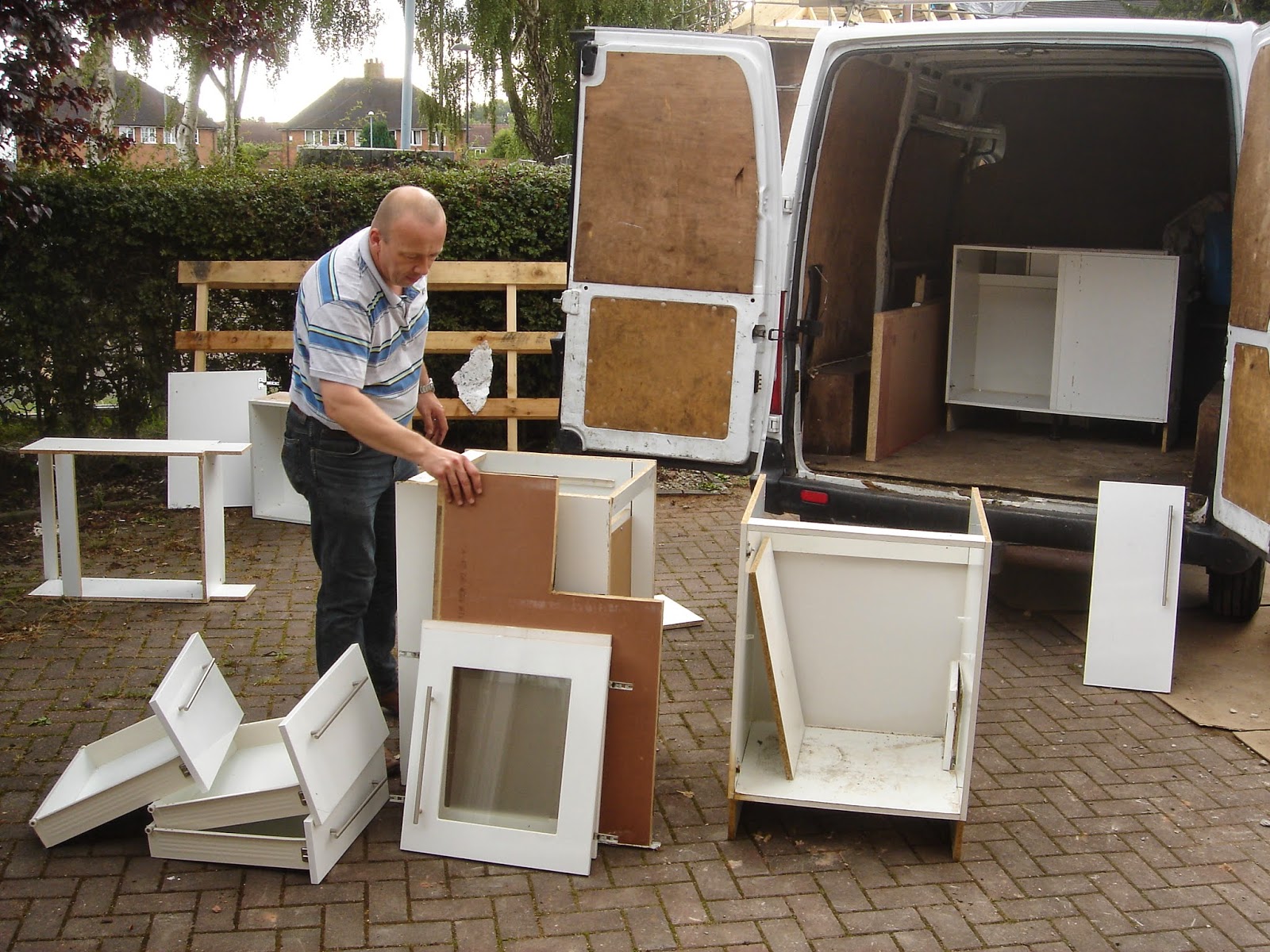 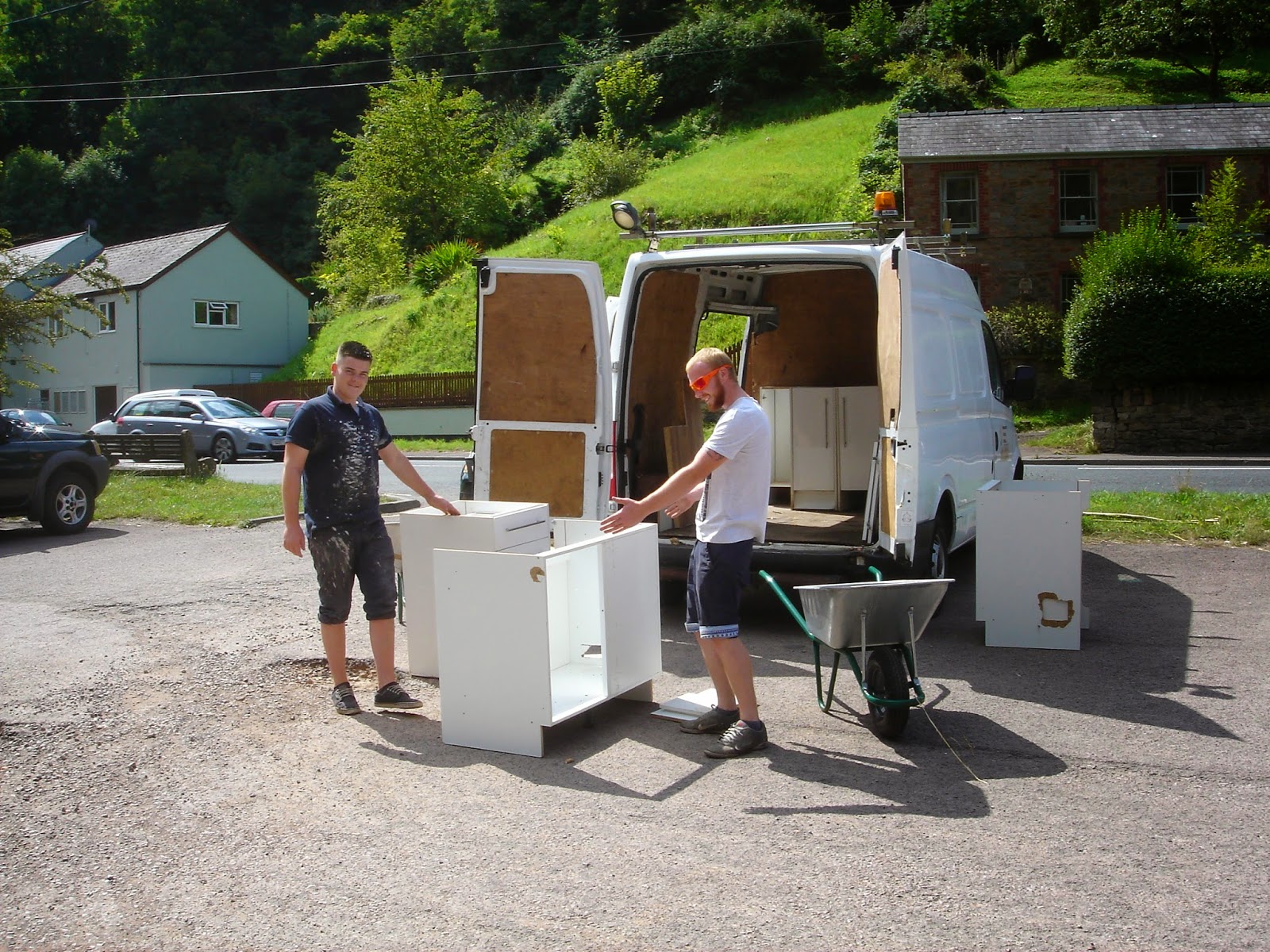 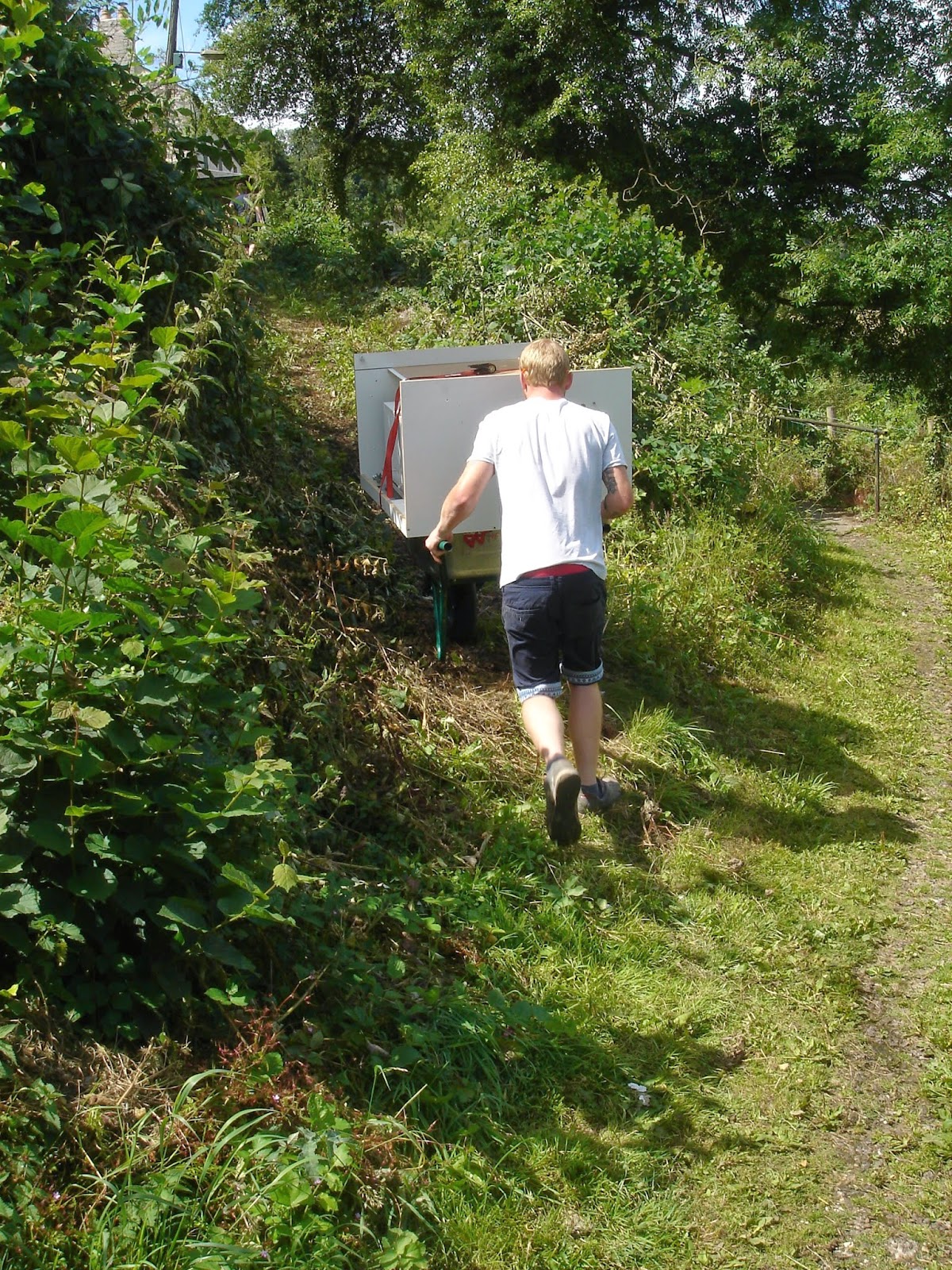 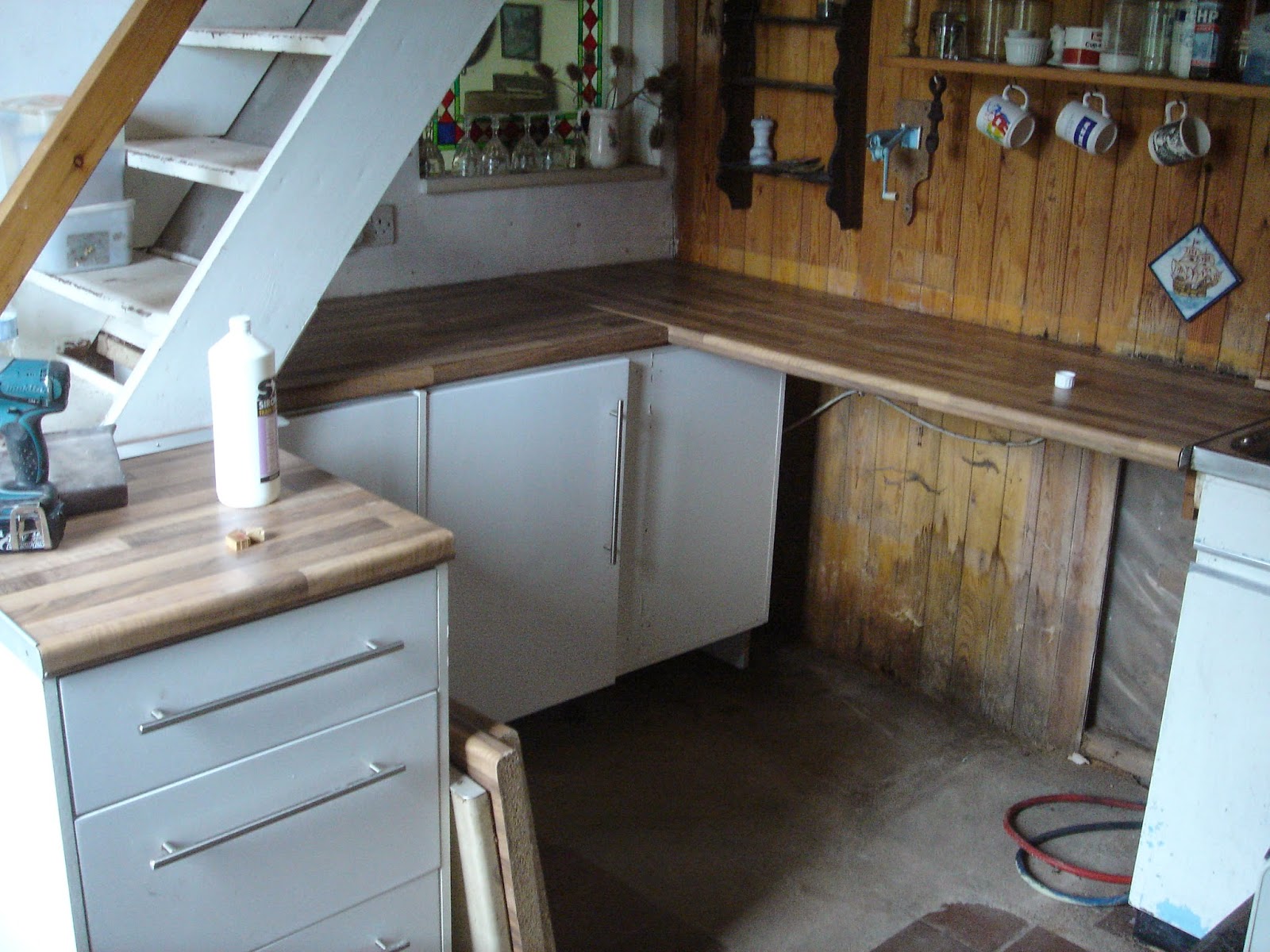 At the same time as the kitchen is recovered at Rock Cottage, Martin has been sizing up what needs to be done on the bathroom, left unusable by the previous builder.
I left this for Martin and Lin to discuss. 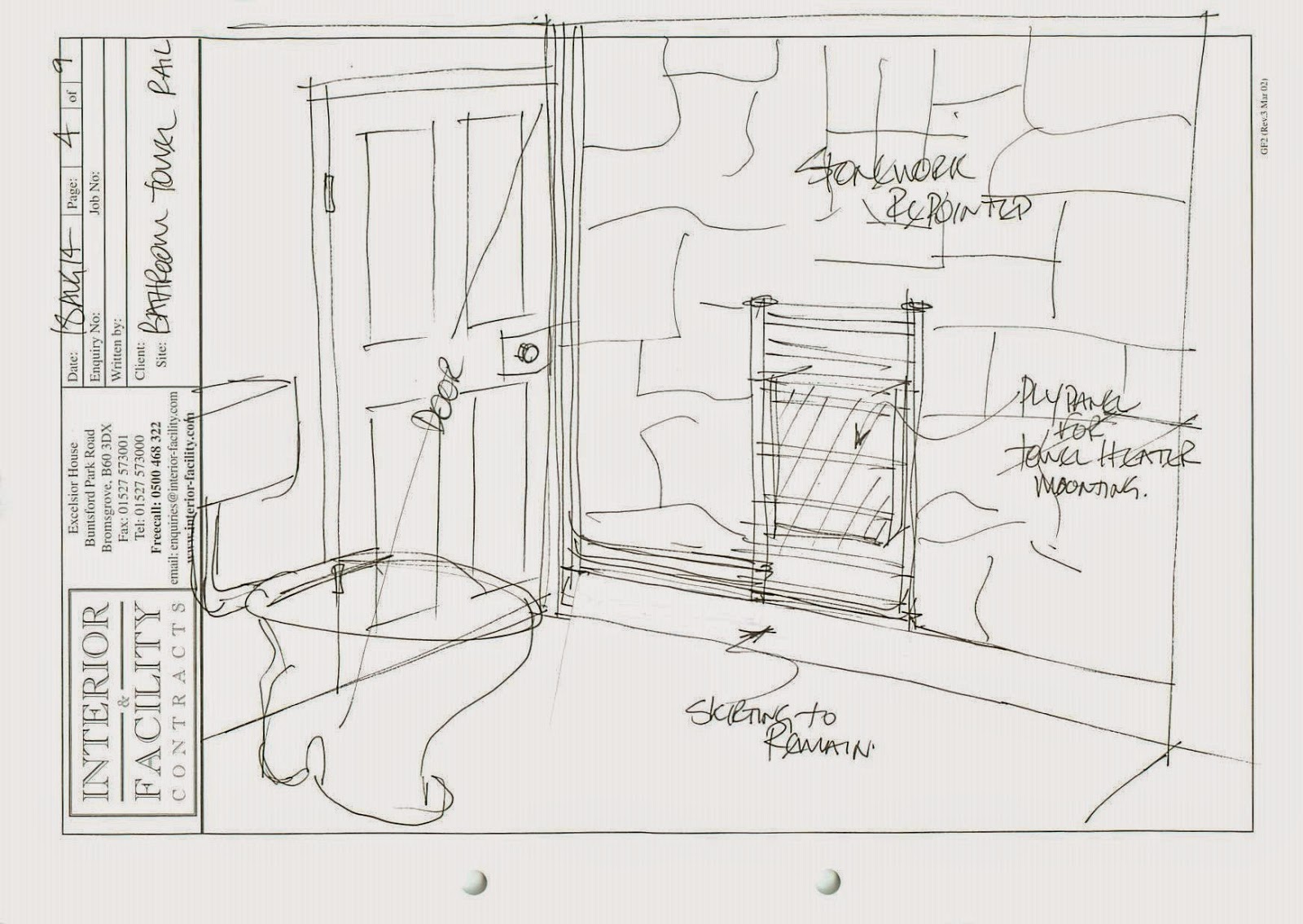 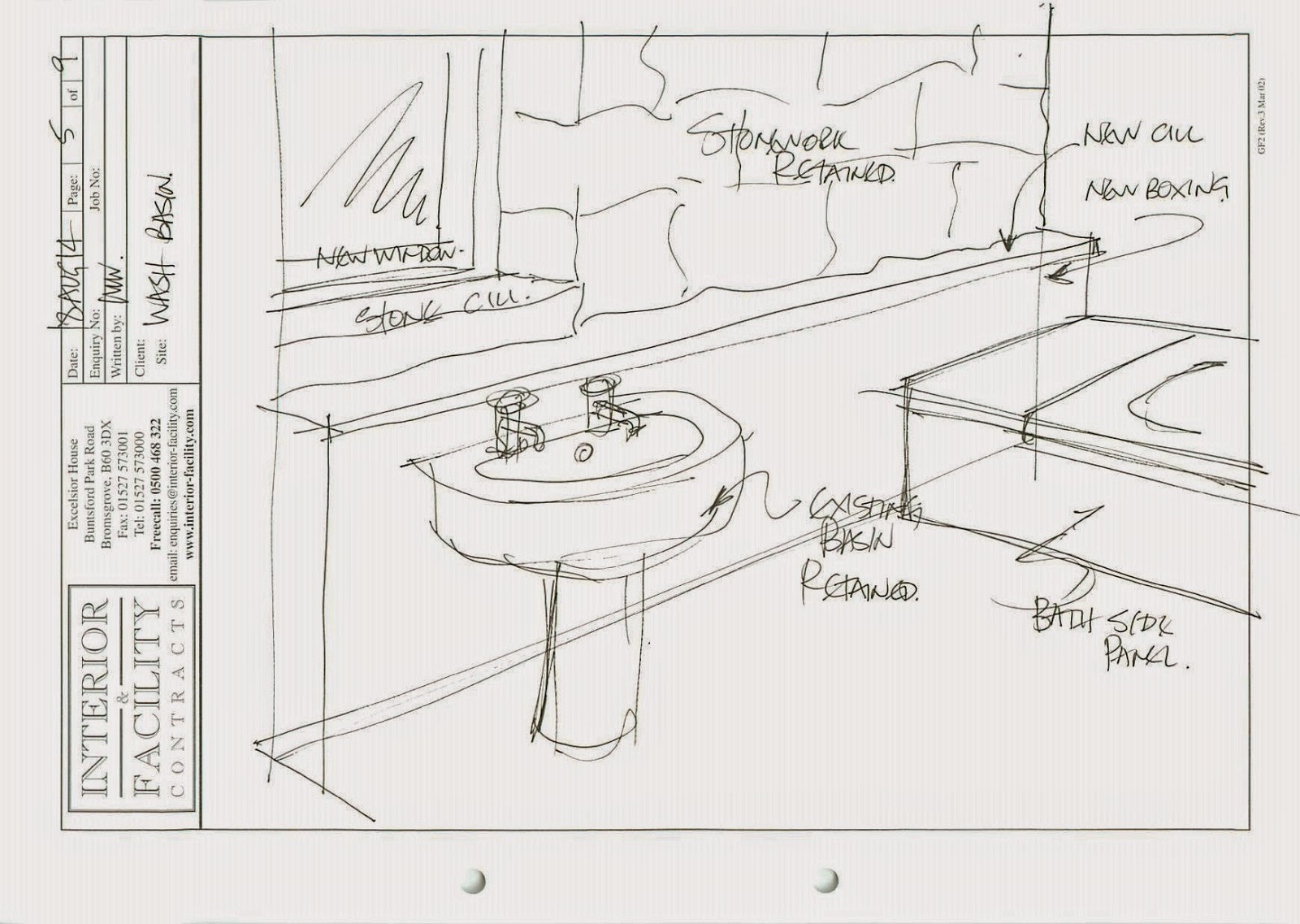 The old cast iron bath will go back, but the other way round, so we can have a shower installed.... 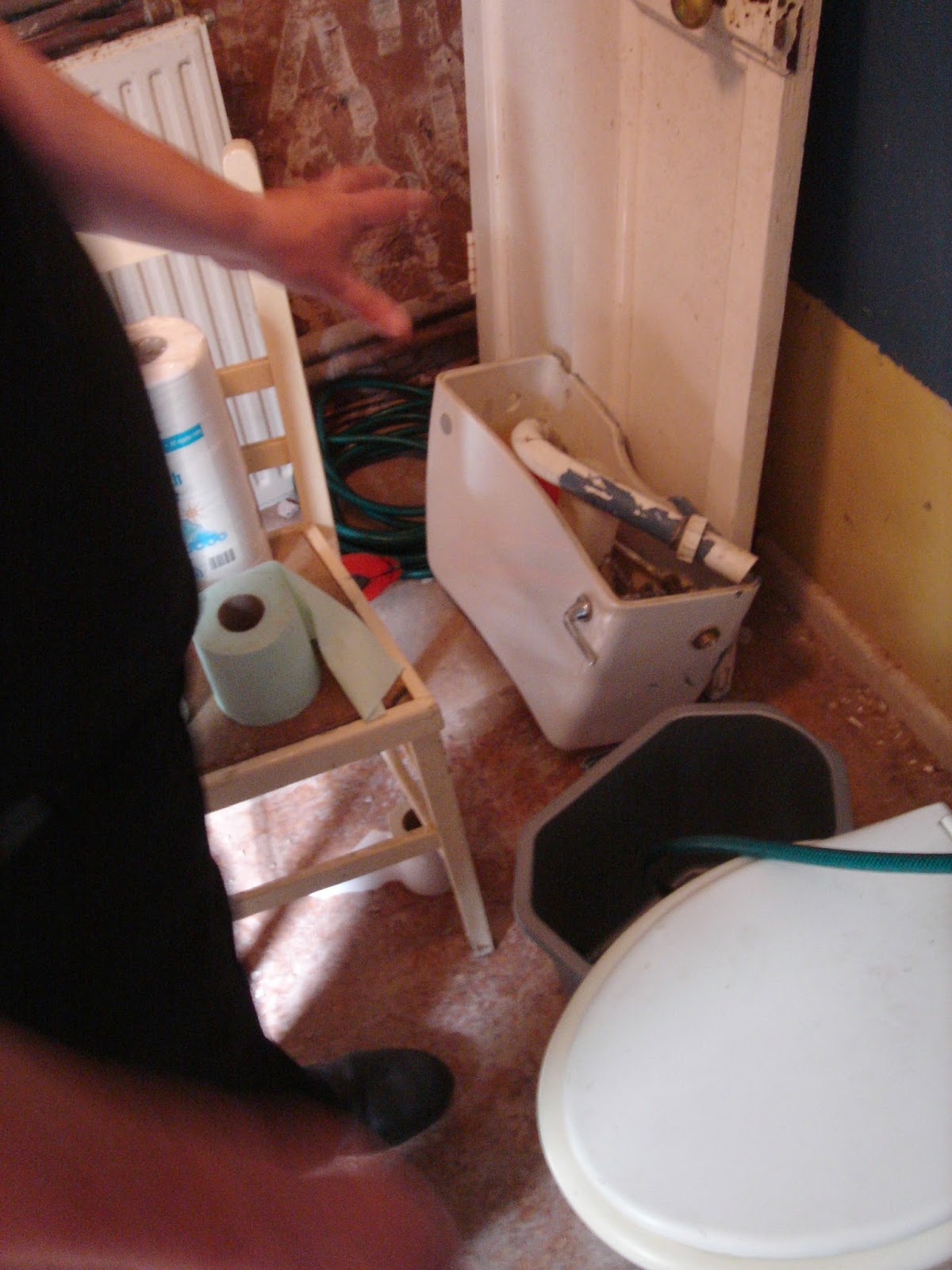 ...One wall will be dry lined - plaster board fixed to a frame over a sheet of polythene. That will be behind the bath - and tiled. The old WC can go back as also the basin but its plumbing will be replaced
"I don't know how your bath ever drained itself" said Martin.
He made other suggestions - a better placed heated towel rail and radiator for instance. Once the kitchen, the bathroom and one upstairs bedroom are made good, we can stay in the place and continue the work. Martin ran through a range of other jobs to be done. Meantime the old kitchen units and tops were taken down Bell Hill to go in the van and, with other rubbish collect from the streets  of Handsworth taken to Holford Drive recycling depot where they will disappear into land-fill or be incinerated - so primitive still are Birmingham's contract locked techniques for dealing with waste.


iPhone from Adam this w/e:


Hi simon. Rock cottage progress today
1.we have finished off the work tops in the kitchen
2. We have sorted a lot more stuff out in the living room (some taken up stairs) created a lot more room :)
3. We have cleared the bathroom and brushed down all the walls ready for re-pointing and sealing
4. Also in the hall by the old front door has been emptied and all cleaned down ready for repair work etc
5. We have bagged up some plaster that was on the floor which the old builder knocked off and taken with us to discard of at the works skip
I think we are getting closer to starting some plastering works. Also the bathroom is ready to go so I will have a word with my dad and will get in contact soon :) Thanks, Adam

He attached pictures.  This regular updating by email with images is so reassuring, allowing discussion at a distance, checking; easing the iron rule about never leaving even the most trusted of builders to work in your absence.
*** *** *** ***
I'm getting lessons on the intrusive range and depth of viral marketing as Oliver, while having nappies changed, eating morning toast, sitting on his pot, is allowed to watch one or another laptop or even smart phone, as a supplement to baby-sitting. He watches adults but also children selling global toys, his favourite Lightning McQueen, an animated car from films by Disney. These clips are mainly on Youtube. Some are professional animations. Some are well crafted amateur-looking chats about things, where, in front of a relaxing voice-over, and lift-music, toys are unwrapped from cellophane and various plays with the objects enacted. Often there are animated games advertising software for the actual game that last for minutes at a time, with frenetic voice-overs and sound effects - skidding tyres, gun-fire and crashes. These are in English - US and UK - in Japanese and Russian and I'm sure many more. The repertoire is immense and continuous, as one clip leads conveniently to the next, advertising interspersed with advertising, overlaid with muzak and disarming many-accented commentaries.
I don't like this one little bit but it's so bloody convenient.
Oliver is kept entertained while essential domestic tasks get done, but he's being seduced for future consumption. I'm pleased that when we're in Greece our lack of Wifi will have conveniently excised this umbilical. I'm ashamed of relying on it; impressed at its ingenious intrusiveness - the core dynamics of consumerism in the heart of the home, more present then ever via the social web; all things I knew would happen when I wrote about 'micro-marketing' and the 'internal polity' back in the early 90s. Thus capitalism, with its astonishing reach, reproduces its processes even more intimately than when my children were small, or when parents and schools of the 1940s worried about the effect on me of comics.

I realise that this exposure can also be a vaccination. Much depends on what else Oliver does in his daily life; on the negotiation between him and his family and the global market; about what we will allow to be commodified. Authoritarian regimes seeks non-negotiable ways into a child's mind. At least in a democracy we have choices, but as the truism goes 'the price of freedom is eternal vigilance'. At the moment Oliver's relations with the web is more or less one-way with him as spectator. The wonders, hazards and utility of the social web are yet to come.
On Plot 14 Hannah made her first visit yesterday.


I have recruited Winnie to help dig over the plot. She brought her son Dennis who often helps us collecting rubbish on the van with Handsworth Helping Hands. 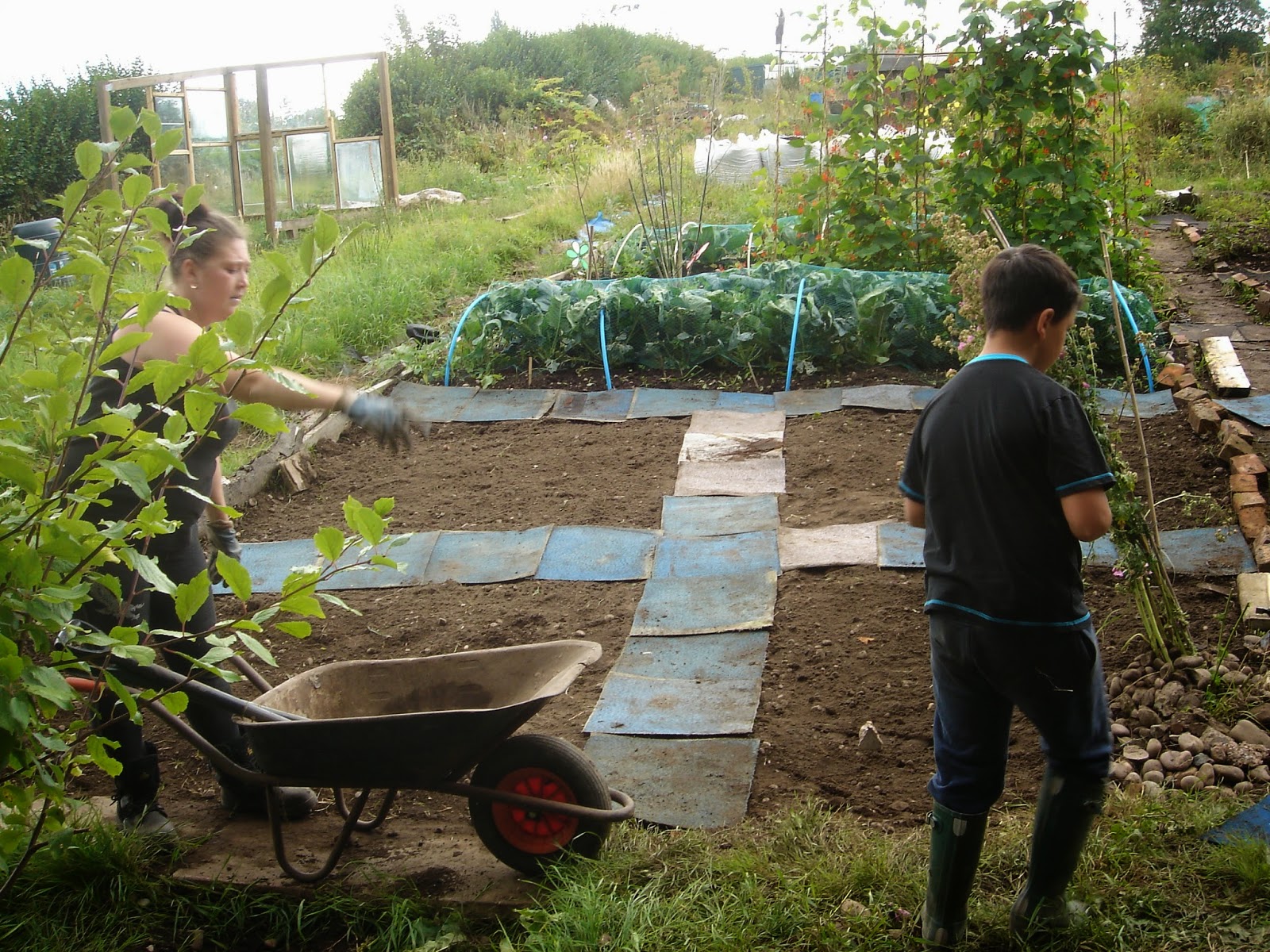 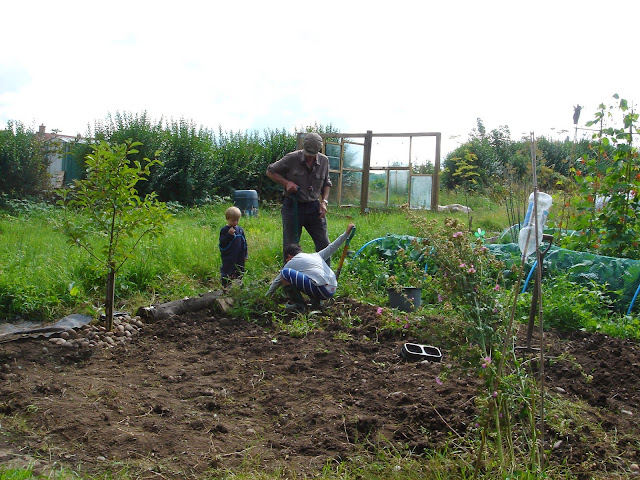 Between us we are working over, yet again, ground that needs, weeding and enriching with compost as well as further de-stoning. I've decided to use carpet tiles - recovered in large numbers from where they were fly-tipped into a Handsworth back-garden - to trace out paths that divide the plot into manageable sections. I'd like to make patterns; perhaps a Union Jack. The tiles need not be permanent  if enough of our walking on these paths compresses the ground enough to make new weeds less welcome. I'm also installing gutters to collect rain from the two slopes of the shed roof. 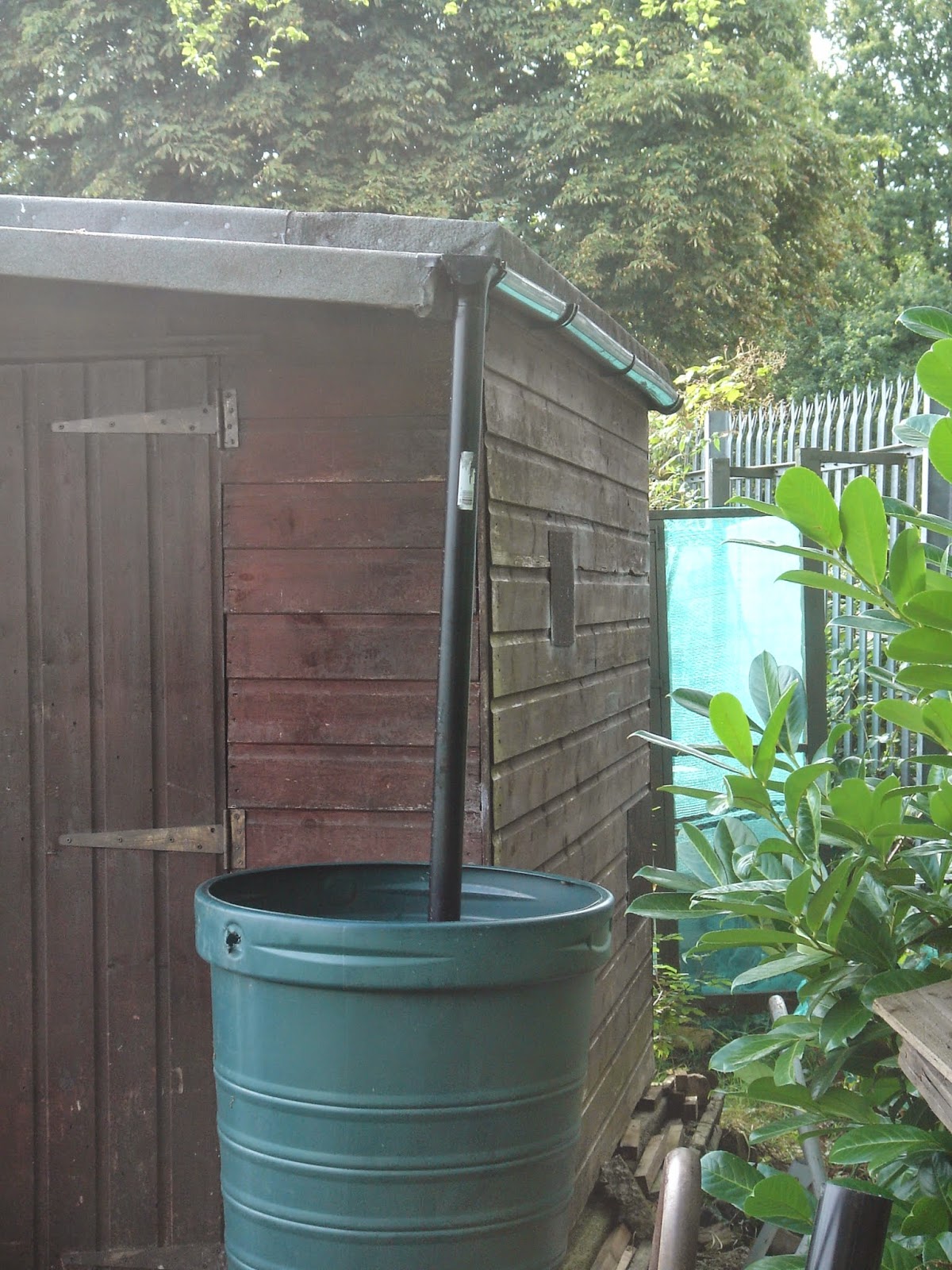 I have now accepted unashamedly that my allotment is a bourgeois hobby...


The benefits of allotments are both tangible and intangible and include a space for recreation, exercise and, if desired, an opportunity to network. However, allotments also offer a space for contemplation and/or solitude and the chance to indulge in the hobby of growing one's own food in an idiosyncratic way and for personal reasons. Allotments and other urban agriculture projects also offer an opportunity for excluded groups or individuals to participate and become involved in a project. In this way, allotments can contribute to a sense of self as well as community and, accordingly, they can help to shape lives and encourage social integration. Acton, L 2011. Allotment Gardens: A Reflection of History, Heritage, Community and Self. Papers from the Institute of Archaeology 21:46-58, DOI: http://dx.doi.org/10.5334/pia.379

So feel less guilty about the money I pay for help and the parts I buy, like the 65mm shed guttering from Wickes which is a devil to assemble at the joints.  I eventually gave up trying to 'click' in joiners and end pieces lined with a stiff rubber washer, stripped these out, and substituted silicone from a nozzle; but the whole set of bits and pieces - gutters, down pipes, gutter brackets and the rest - cost me £44. Crazy! The decent thing would be to look out for things that people have discarded and make shift. Scavenging with Handsworth Helping Hands gives as good an opportunity as any to avoid paying at the till from retail superstores.
Posted by sibadd