We had a good meeting - we reckoned who were there - about the Black Patch; with Nick at Sandwell Council.

"It's very chicken and egg. All about momentum!" said Nick twice, as we wound up a meeting that lasted a good hour. We'd explored and aired the continuing problems of lack of public money, the marginal location of the Black Patch on the Birmingham-Smethwick boundary; that there's not a single resident who opens a window on to the park. Nearly everyone who lives beside the place has been 'decanted' elsewhere. Black Patch has no obvious local constituency of users, but it is the focus of  significant communities of interest - rather than of place; urban explorers, industrial historians, Travellers, footballers. It has four schools nearby, connects to the Midland canal network and the SUSTRANS network; a wildlife haven amid industrial dereliction. It's haunted by Queen Henty... 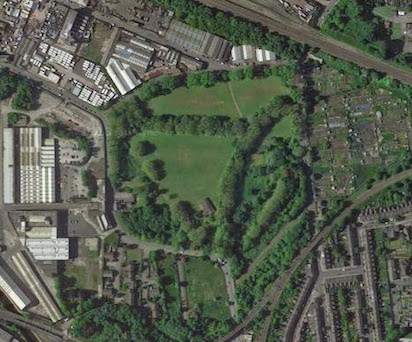 Nick, himself enthused by our separate presentations, will seek to widen interest in the Council. In the current situation we can hope for nothing better than that we, and all involved, should via a mix of luck and endeavour, arrive at a critical mass, a tipping point that brings serious attention to the meaning and significance of this neglected place.
My message this morning to committee members of the Friends of Black Patch Park

Can we get these links to Nick ASAP - with brief explanations.

- Song on YouTube by Bryn Phillips about Queen Henty's curse


Going home from the Council House in Oldbury Phil gave me directions for getting home off the roads, so I cycled past Sandwell and Dudley Rail station - where I'd arrived after a 20 minute journey from a morning appointment in New Street - and came to a sloping alleyway that led me to the Birmingham Mainline canal, whose narrow towpath widened after Galton Bridge, a greenway into the centre of Birmingham on which I saw a heron, dodging me by yards, unfrightened; also geese, duck, seagulls, coots and moorhen and a few walkers and one other cyclist and greenery galore. 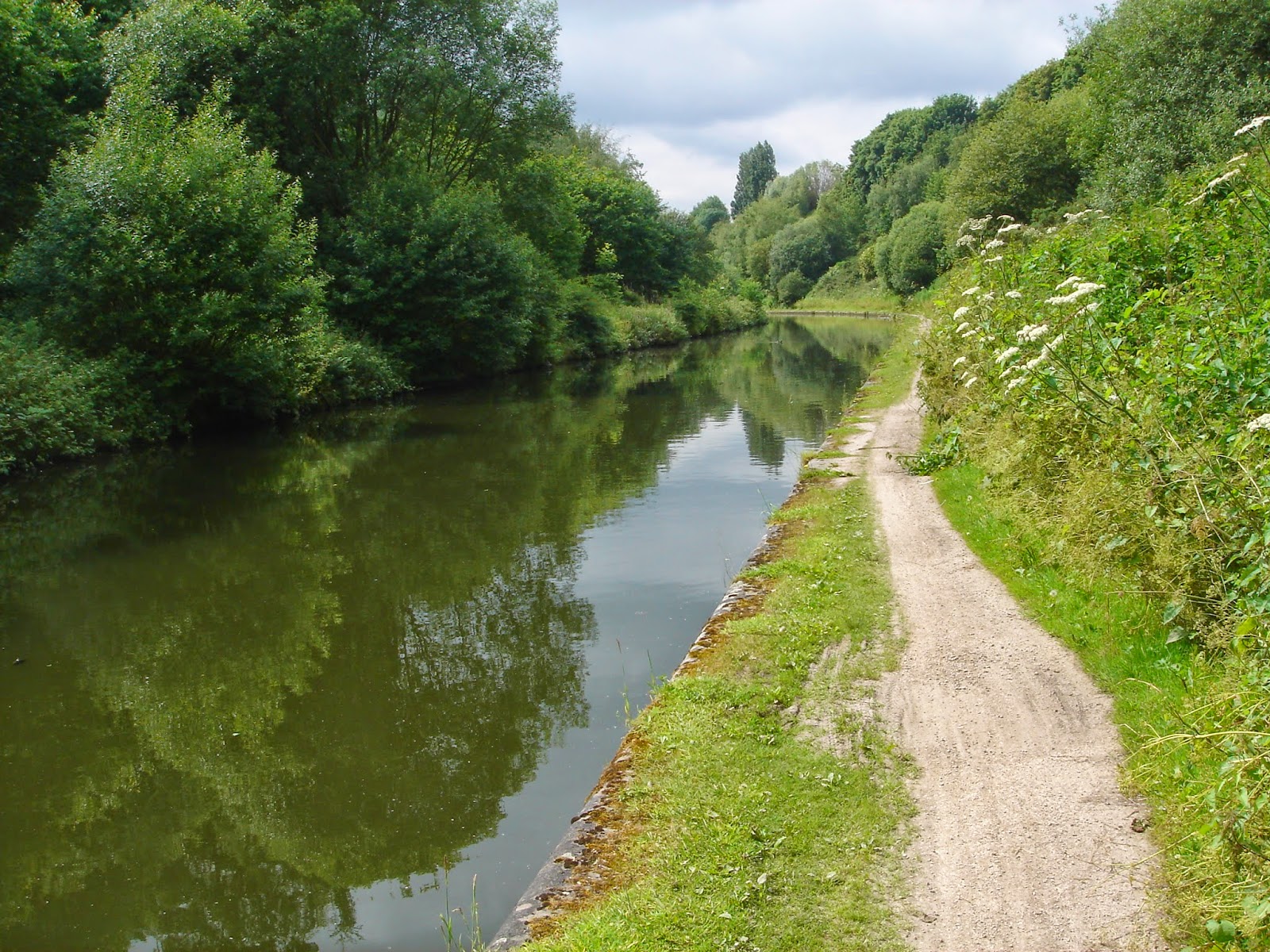 From the mainline I turned off at the Soho Loop to cycle home past Winson Green Prison, via New Handsworth Road, the Soho Road, Ivy, Lansdowne and Broughton Roads, dropping in on the Victoria Jubilee on the way. I am enjoying just seeing my allotment and in a while will set to scything my neighbours overgrown plot...


Dear Jeevan/Gill. Can I get my scythe to to the seeding weeds all over my neighbours' plots? Plot 13 and 15. Best wishes, Simon

Hi Simon, Plot 13 can be trimmed as it is now empty but plot 15 has a new tenant, his name is Rxxx so please don't cut this one. all the best, Gill

*** ***
The walk we planned in  Handsworth Park started late. Amy and Liz arrived with their children. Oliver had turned poorly with a temperature, clingy and weepy. We headed for Summerfield drop-in centre - a projected two hour wait.
I bought some Kalpol so Amy could dose my slightly reluctant grandson. She used a squirter to get two teaspoons into his mouth. Fifty minutes waiting with me doing some babysitting for Sophia and Amy's name comes up on the clinic TV screen.
It was all simple.
"He's probably fine. Keep an eye"
So now we headed for Handsworth Park, Linda joining us along with Oscar. So now we have hardly three weeks before the entry into the world of a grand-daughter.


*** ***
As a result of a two day course I helped lead the other day I've been sled to do a morning for officers in a northern council:

A morning seminar focusing on skills and values for working in a politically led organisation. It will:

• assist you to read and maintain your knowledge of the political scene,
• explore the skills and values basic to political-management working,
• develop and fine-tune your feel for the boundaries between political, managerial and professional work,
• add to your vocabulary of political concepts, offering models of competence and integrity in politically sensitive situations.

Brief introduction - overview of the morning

Summary and feedback: Q & A

Tutor: Simon Baddeley’s expertise lies in the study of working relations between politicians and managers in local government. As well as in the UK, he’s taught and researched in Australia, New Zealand, Sweden, Japan, and Canada. During the morning Simon will stimulate interest in the skills and craft involved in managing with political awareness, as well as facilitating discussion among participants of the local political environment and its implications for officers.


Dear G. Can I get my scythe to to the seeding weeds all over my neighbours' plots - Plots 13 and 15?  Best wishes

Hi Simon, Plot 13 can be trimmed as it is now empty but plot 15 has a new tenant, his name is xx so please don't cut this one. all the best, G

Understood. But xx's grasses are growing as high as 13’s. Any chance you could get him to get in touch with you re the impact of his ‘weeds’ on me and everyone else. S

Hi Simon I sympathise as I have the same problem but xx has only just taken on the plot so perhaps we need to give him a bit of time. He has been down so he is keen but I will talk to his plot rep and ask them to keep an eye on things. All the best. G 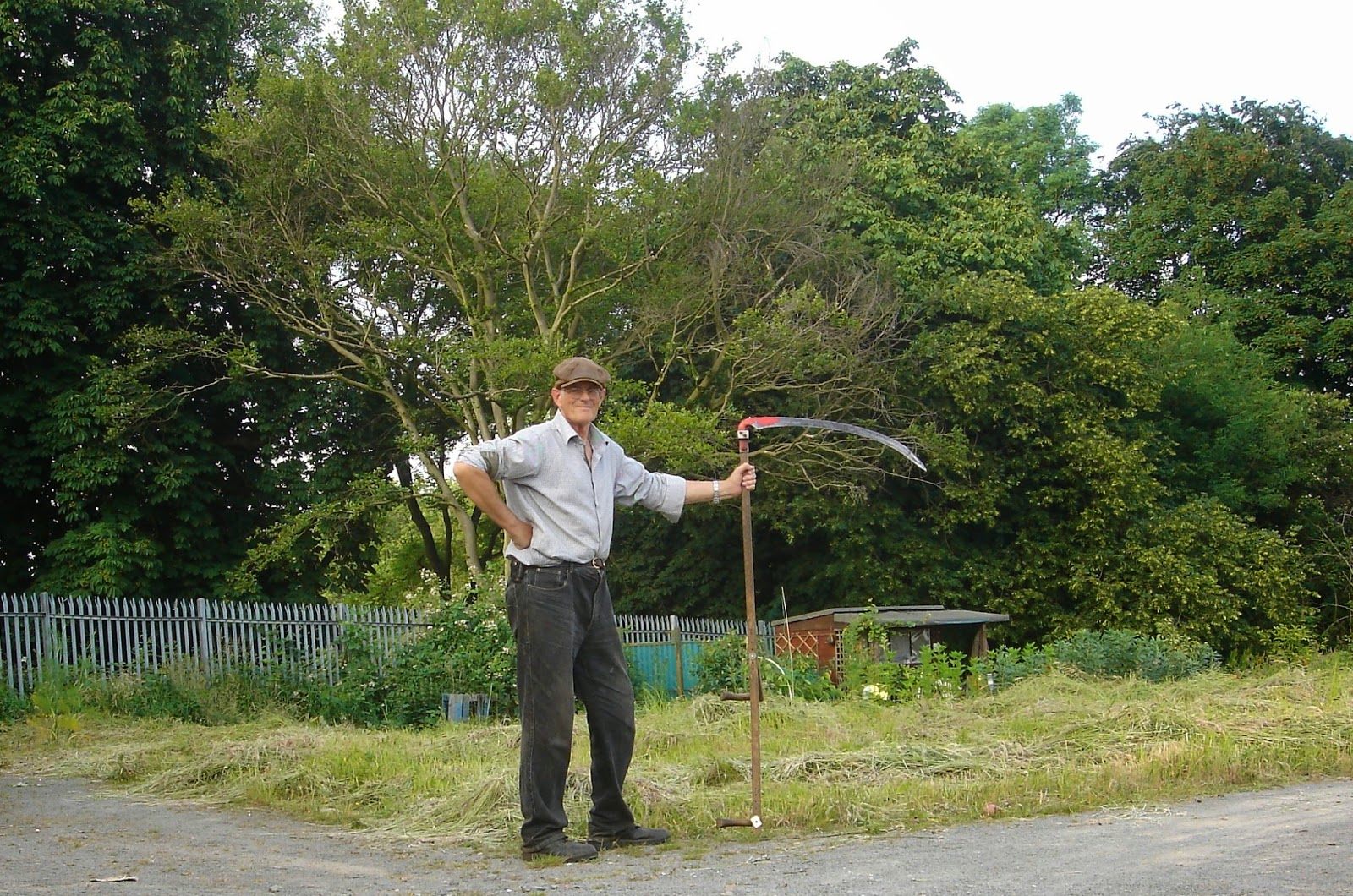 A strimmer or, even better, a power scythe would do this job faster, so why rely on a traditional  scythe? I enjoy the process; the judgement involved in selecting the right blade, setting its angle in two dimensions, and positioning the handles of the snath, tailored to my height and the length of my arms; the physical skill of getting and keeping up a scything rhythm; knowing how to sharpen the blade, keeping it razor sharp with a whetstone every few minutes of work; the pleasure of hearing the slice of the blade as it fells the grass, its fallen smell and the quietness of the work. The ability to deal with chips and dents as a result of striking stones in the undergrowth. That's the process of peening with hammer and jig, which also ensures a sharp edge as a blade gets older; the sheer pleasure of owning, looking at, and holding, so simple and so ancient a tool.
A friend told me of an old groundsman in Birmingham who could shave down to bowling green standard with a scythe. I tried it on our front lawn last year and realised how it could be done - a blend of blade set, sharpening and rhythm.


THE PERSONAL matter that absorbed Levin during his conversation with his brother was this. Once in a previous year he had gone to look at the mowing, and being made very angry by the bailiff he had recourse to his favourite means for regaining his temper,—he took a scythe from a peasant and began mowing.
He liked the work so much that he had several times tried his hand at mowing since. He had cut the whole of the meadow in front of his house, and this year ever since the early spring he had cherished a plan for mowing for whole days together with the peasants. Ever since his brother’s arrival, he had been in doubt whether to mow or not. He was loth to leave his brother alone all day along, and he was afraid his brother would laugh at him about it. But as he drove into the meadow, and recalled the sensations of mowing, he came near deciding that he would go mowing. After the irritating discussion with his brother, he pondered over this intention again.
‘I must have physical exercise, or my temper’ll certainly be ruined,’ he thought, and he determined he would go mowing, however awkward he might feel about it with his brother or the peasants.
Towards evening Konstantin Levin went to his counting house, gave directions as to the work to be done, and sent about the village to summon the mowers for the morrow, to cut the hay in Kalinov meadow, the largest and best of his grass lands. (Anna Karenina 3:4)