Because his museum, for complicated reasons, is not open to the public or even the village, far too little is known of the laic - λαἲκού - sculptor Aristeidis Metallinos, whose work Linda and I first saw before last Christmas, with our friend Cinty, as guests of Angeliki Metallinos and her parents Anna, and Andreas, the sculptor's son. We were entranced, intrigued, amused and enthused.
Imagine then my delight at seeing that Thanassis, who runs the village website, has just posted a piece about his fellow villager, including two images of the sculptor's many reliefs.
It seems that the safest, perhaps the wisest, way to bring the sculptor wider attention is to focus on his role in depicting tradition - the life of a pastoral village society, known through his childhood and middle age; almost disappeared by the time he began, late in life, to carve in stone and marble. He celebrated his wife and children, motherhood, the beautiful costumes that villagers - men and women - don, even now, for dancing and singing. Several of these pieces are shown in one of the few academic papers about the man (Eurydice Antzοulatοu-Retsila (2005) ‘The folklore of Corfu in the art of the traditional stone-sculptor Aristeidi Metallinou’, in Evrydiki Antzοulatοu-Retsila (editor), Culture and Heritage Combined, Papazisi Publications, Athens, pp. 47-70 [ISBN: 960-02-1860-9]} - Ευρυδίκη Αντζουλάτου-Ρετσίλα (2005) ‘Θέματα Κέρκυρα ι κής λαογραφίας στο έργο του λαἲκού λιθογλύπτη Αριστείδη Μεταλληνού’ στο Πολιτιστικά και Μουσειολογικά Σύμμεικτα, Εκδόσεις Παπαζήση, Αθήναι, σελ.47-70 [ISBN: 960-02-1860-9])

Trickier is knowing that the village's sculptor, as well as recording tradition - the laic element of his work -  was also using his hammer and chisels to create a commentary on human nature and the world - pungent, erotic and ribald. This is why, before we saw the museum inside, some described - still do - his house as 'the naughty museum' or remarked "Isn't he the one who made all those sexy sculptures?"; even "Didn't he do pornography?"
Have a second glance at the relief of traditional olive pressing - seated centre, the man in his boater rainy the supervising arm of one in charge. Aristeidis worked marble and local stone with passion... 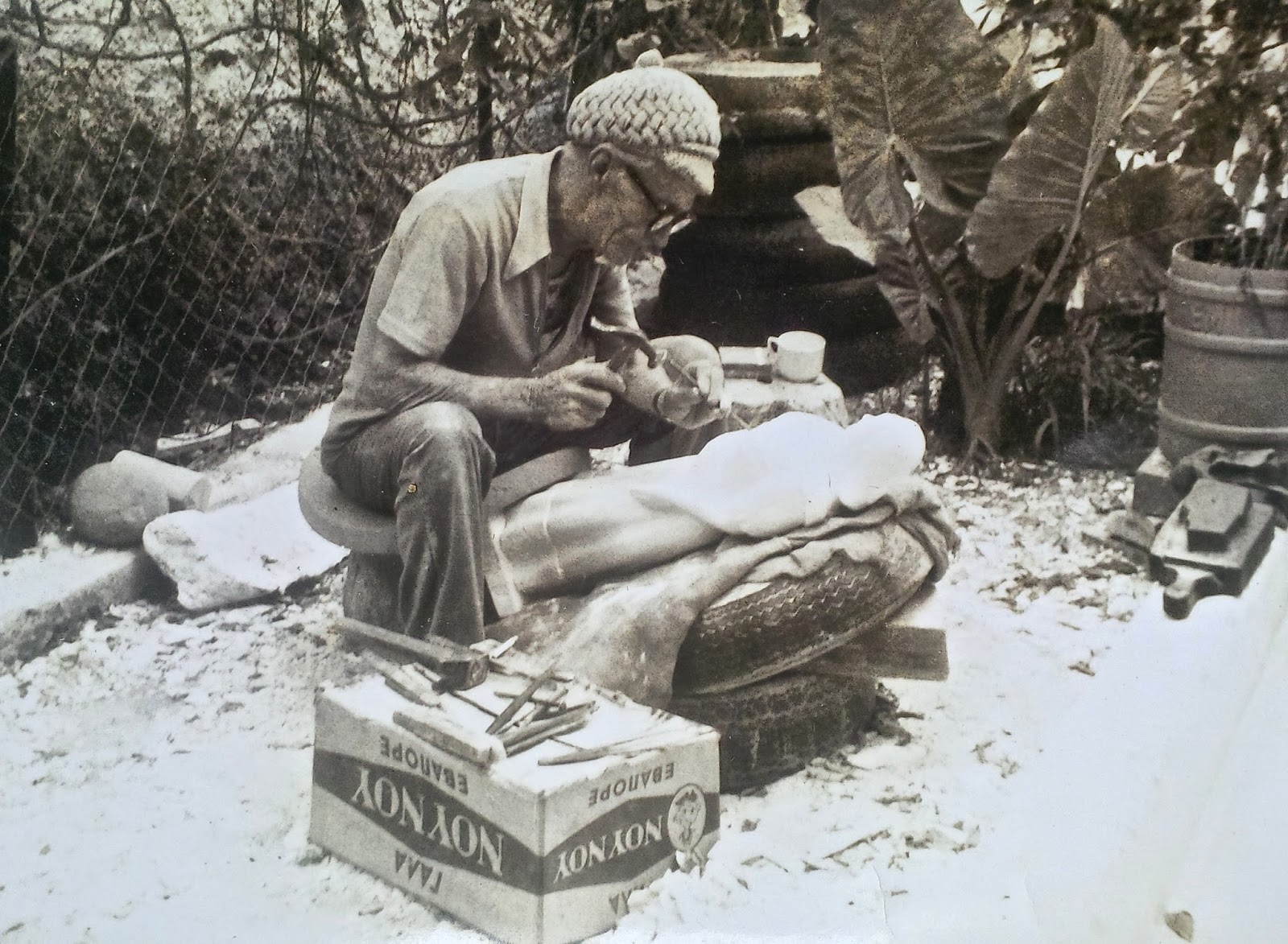 ....depicting inequality, injustice, depravity; man's voracious and feckless appetite for cruelty, gluttony and meanness; the oppressive wheel, the butcher's shop, the Procrustean bed...How troubling for a village proud and glad of its history and traditions, its ceremonies and celebrations, to find a fitting address for the recalcitrant stone worker on Democracy Street... 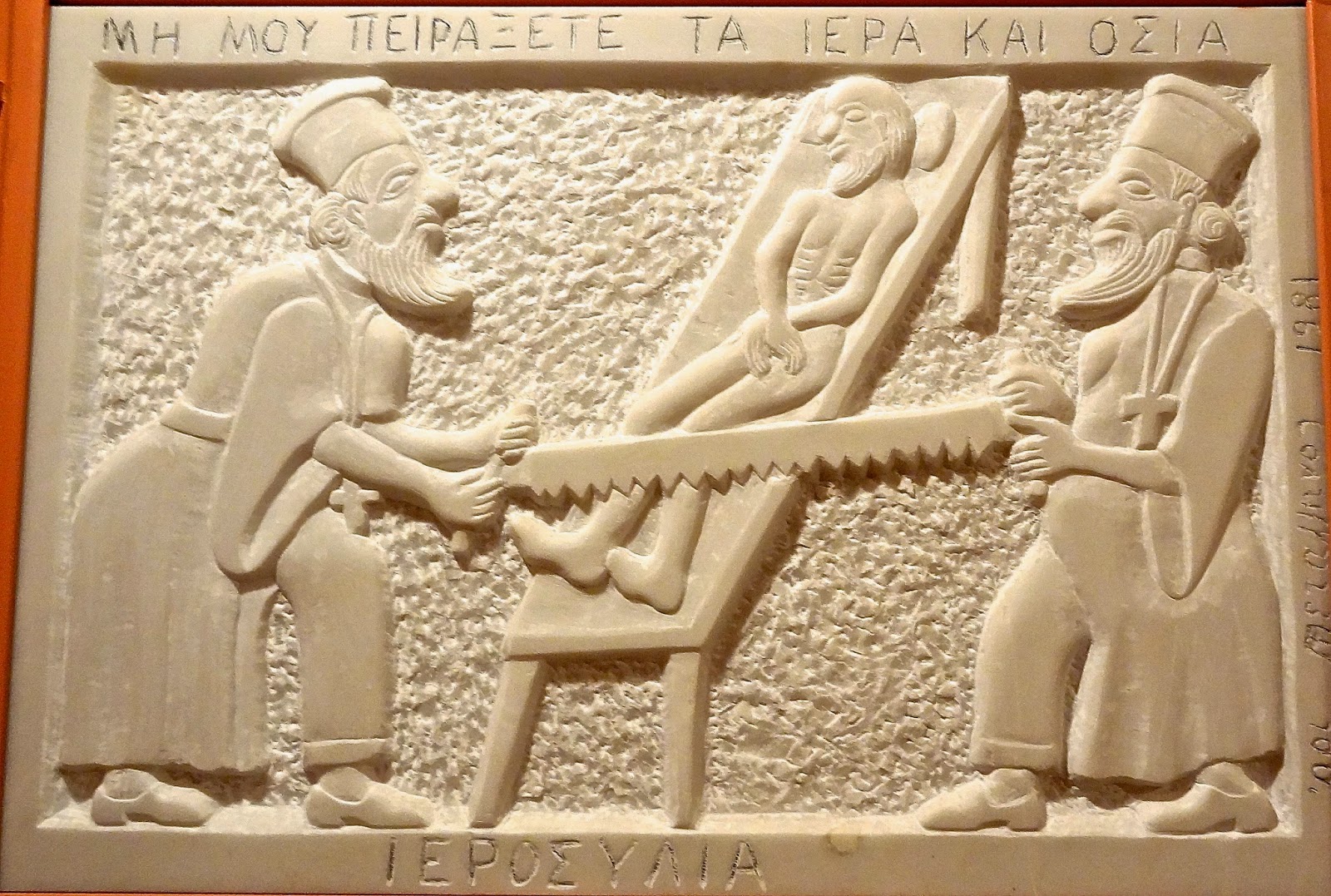 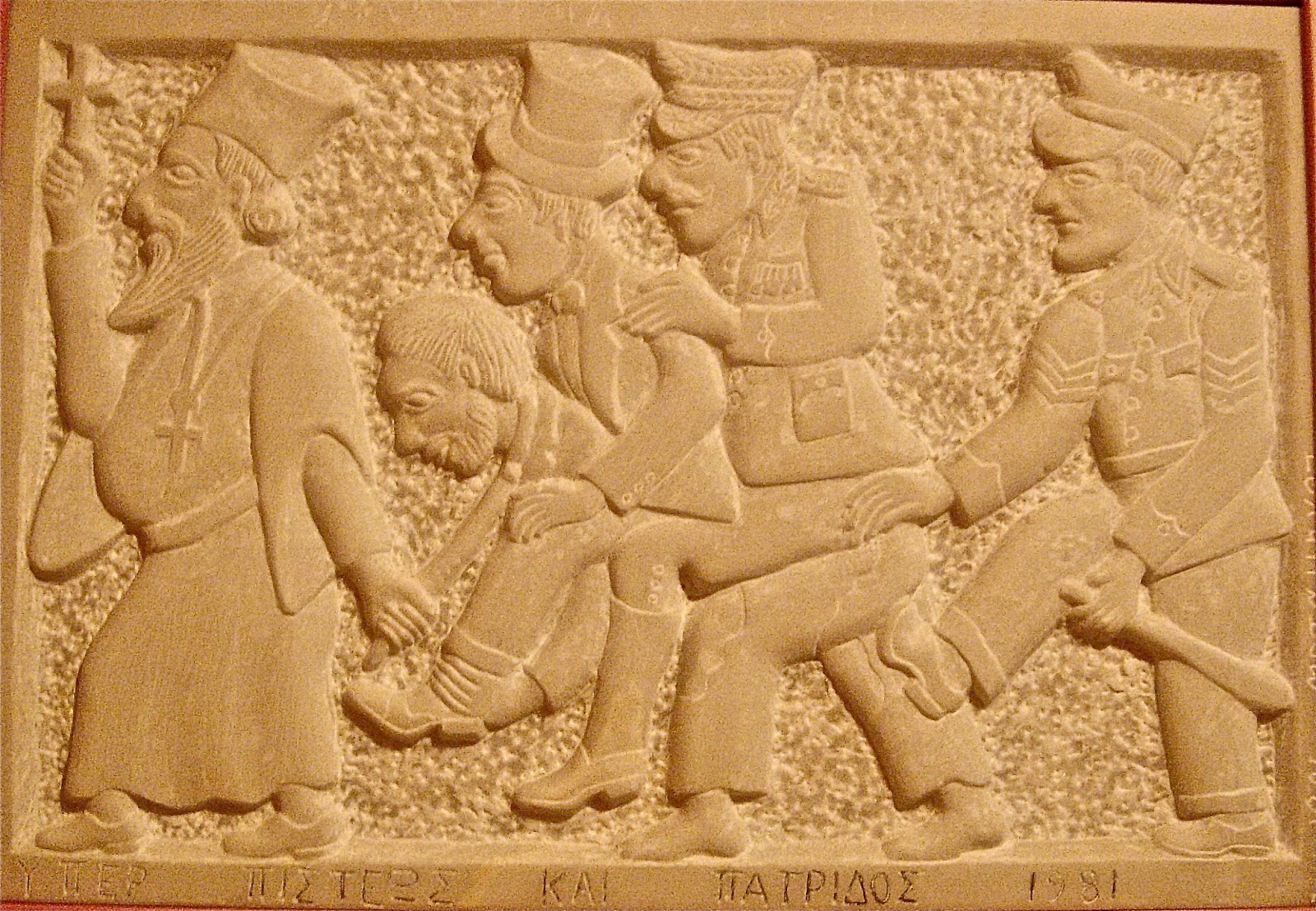 *Images of the village artist and his work posted on Democracy Street with permission from Andrea and Anna Metallinos, for which many thanks!

**Anastasios Nikolouzos, who we know as Tassos, has listed his grandfather's works, numbering them with date in the order of their current display in the 'museum'. Angeliki, the sculptor's granddaughter has translated her cousin's list into English. I've used these listings to create a draft file - κατάλογος - putting the works into rough chronological order from 1928 to 1986. There are small differences over spelling, and translation is flexible when striving for interpretation. Thus we create the basis for a catalogue (cat.) κατάλογος of Aristeidis Metallinos' works with titles, dates, images and comment.

*** *** ***
Pizza and salad for supper. Lin carefully rescues an exquisite little snail - Helix aspersa - nestling in the remains of Lollorosso from a friend's allotment. 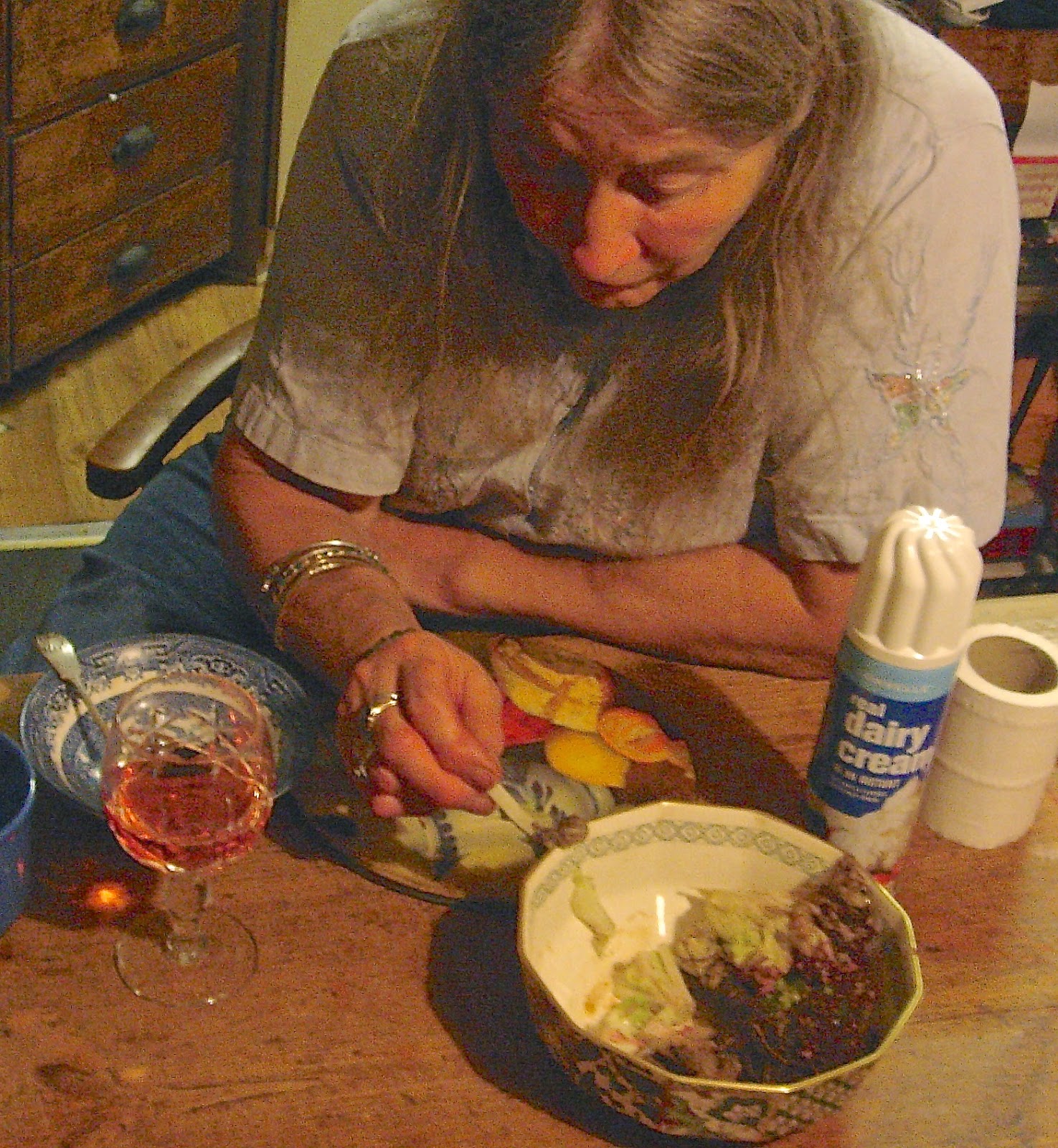 *** *** ***
Denise and I used the Handsworth Helping Hands van to scavenge in Livingstone, Stamford, Crompton and Hutton Roads, taking a full load of waste to Holford Drive, including a fridge-freezer and sofa. Denise and I chatted with neighbours, got help loading the van from a young resident (photo permitted by parent) and discussed a future clearance of the 'secret garden' a long neglected fly-tipped green space playground inside the corner of Hutton Road and Grosvenor Avenue... 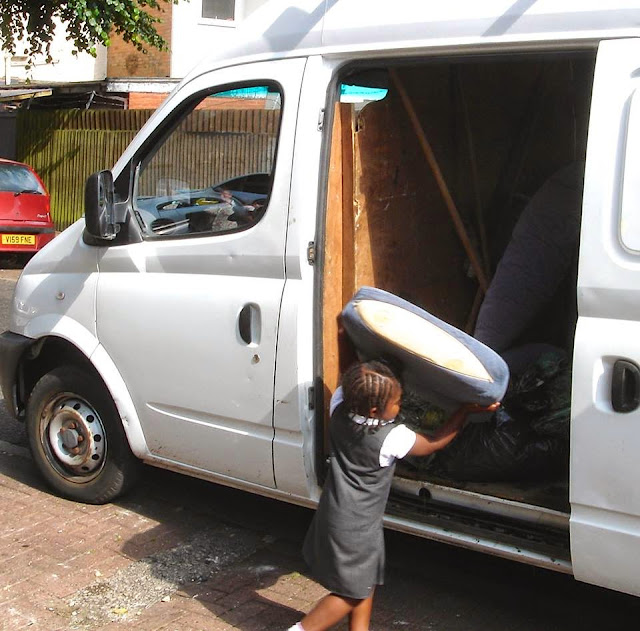