Nigel Farage isn’t a nasty man. He's popular in sections. Married to a German, parent of two children, cricketer, no thug, not racist, born in a Kent village near Canterbury with a metropolitan career, before politics, in banking, he speaks of his idea of how England, perhaps ‘Britain’, its cities and market towns, have become....What did he say in Torquay last week?

He might have described something similarly 'foreign' in the, once, rich cosmopolitan cities of Constantinople, Cairo, Alexandria, Smyrna, Thessaloniki; spoken - "frankly" - in worried ways about their messy hybridity; their polyglot incomprehensibility, a slight vexation that that they too had become “unrecognisable”. Over the twentieth century similar apprehensions, even hopes, in the minds of others, have laundered the diversity of those great cities; the population exchange of 1922 under the Treaty of Lausanne removed Greeks from Istanbul, victims of the 'Great Idea Μεγάλη Ιδέα' and popularly nurtured fears of irredentism, parallel dynamics to those Farage described to UKIP's Spring Conference. In 1922 the bloody catastrophe of Smyrna cleansed that city of its Greeks; renamed it Izmir. Nazi’s murdered the Jews of the great trading port of Thessaloniki. A new kind of Islamisation has dispersed those an Arab empire once harboured. Sephardic refugees found haven under in Istanbul from Christian persecution in Spain;  so the high politics of the Middle East, drives Jews from Cairo; Coptic Christians too. Modern Alexandria and Cairo may be teeming with people, but for their tourists, their diversity is blighted. The remaining Orthodox Christians of Istanbul cluster defensively in Karaköy - once Galata.
“It’s so depressing to see these great cosmopolitan places spoiled by contemporary yearning for homogeneity” I muttered to Wesley a few weeks ago, at lunch in his and Stefie's home in Ano Korakiana.
He replied “Hold on, Simon! You enjoy diversity, things cosmopolitan?”
“Of course”
“Yes Istanbul and Cairo may have changed in ways you regret, but look at London, most of the cities of Northern Europe, and your Birmingham, and Leeds, Manchester, Liverpool. What about New York, Seattle, Melbourne, Sydney? Things change. They shift.”
I perked up thinking of my own streets in Handsworth. What Farage calls ‘unrecognisable’ is where I’m at home. I once wrote of this - about the internal heterogeneity that enjoys it in the world - internal polity...

The provinces of his body revolted,
The squares of his mind were empty,
Silence invaded the suburbs,...

Some links that aid my thinking...more about mocking of the poor, fear of the other, rejection of multiplicity...

The Spirit of Haida Gwaii, creation, in 1986, of Bill Reid, comes as near as any piece of art to describing my world. I embrace this work. enjoy the idea of a boat, but the much used image of the 'Ship of Fools' projects our private ugliness - looks and behaviour - as images of shared foolishness, but in the process enjoins mockery of the ugly, the poor, the maimed, the underclasses....

...the present model of a highly centralised state “will not see us through for very much longer”...'

...and this recent piece from the Inlogov blog Migration, citizenship and diversity: questioning the boundaries, in particular research described by Sarah Neal Living Multiculture...


the new geographies of ethnicity and the changing formations of multiculture in England is a two-year research project that explores the changing social and geographic dimensions of contemporary multiculture in urban England....With a focus on the ordinary encounters of increasingly diverse populations in everyday locations the project asks two key questions: how do people live cultural difference, and what role does place play in this process? It is examines the way in which ethnically complex populations routinely interact in convivial and competent ways. Exploring the dynamics and limits of this competency - and its relationship to places that have long and short histories of multiculture - is at the heart of the research

*** *** *** ***
"What can I put into soil as wet as this?"
"Rice?"
"I can't plant potatoes can I?"
"Best thing is to put them in the fridge until May"
At Hirons where I've bought a selection of chatting potatoes and two kilos of variegated onion sets. 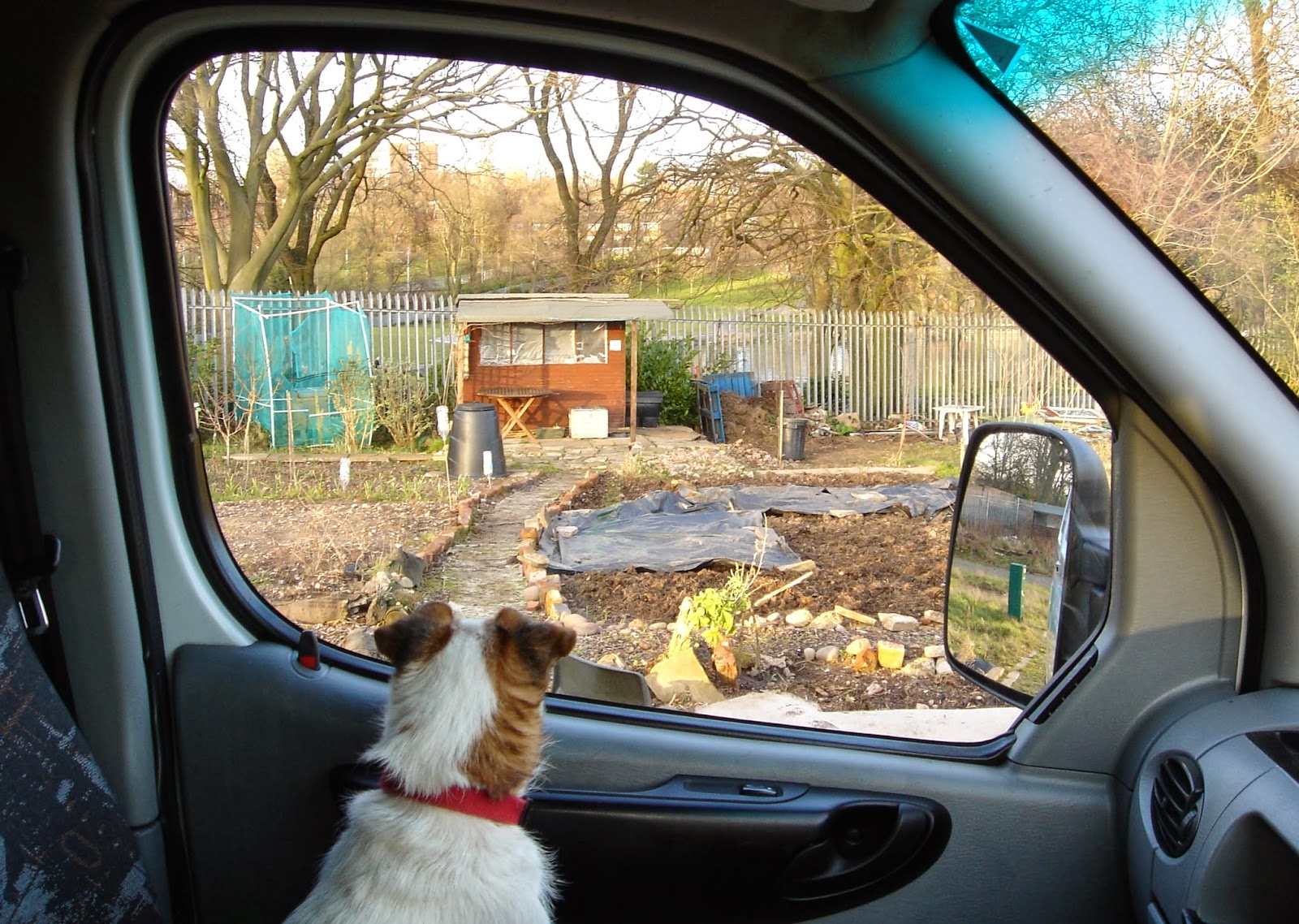 I've been around to my allotment hoping to start planting, but even though well drained, sloping gently down to the park, the ground is spongy damp. I'd be putting the spuds in what's damn near a swamp. As for onions...
Perhaps we'll get a few more weeks of less wet weather. Meantime Taj has cleared a mound of couch grass and removed more of the many stones. If the soil dries out a little we might be good to go. There's no sign of work on my immediate neighbours' plots, nor indeed on too many others. It's not a good time for allotments. I circulated a caution #allotments...


Dear All. Because of the zeal to cut local government bureaucracy, Section 23 of the 1908 Smallholdings and Allotments Act, which requires councils to provide allotments to local residents where there is demand, is on a hit list of ‘burdensome’ regulations.
City Farmer NewsThe Independent
This move is not unexpected. Allotment land has high value - but is currently protected. But it is urban development land where there is intense demand for new housing, promoted by the building industry and the expectations of many citizens expecting easier access to the housing market. It only needs a succession of bad seasons, a few ill-managed allotment sites with many unworked or vacant plots. The temptation to begin a process of selling part, or all, of an allotment site will, if these ‘burdensome’ regulations are removed, become even more inviting, even more feasible. In Birmingham more and more green field sites are being located by satellite and earmarked for future building. Satellite pictures also include images of allotment sites, including the means of calculating their degree of cultivation. I predict that we will see a very strong reaction to these propositions from allotment holders, petitions will be signed, but the demand for development land is relentless.
One of the greatest problems is that many allotments are no longer a means for a working man to feed his family. They are more for the leisure and recreation of the middle classes.
A friend, Dr Richard Wiltshire, who has long advised government on urban allotments and city farms, began a chat with me on one of our periodic meetings
“Does your home have a garden, Simon?”
“Yes”
“So why do you bother with an allotment? if you really needed to grow vegetables you’d use your garden. It’d be closer and more convenient and you needn’t pay rent”
He went on to say that governments have noted many people are either concreting their gardens for parking, reducing the capacity of urban land to absorb rainwater, or using them as playgrounds for their children. It would be easy to start a green movement encouraging people through grants or council tax concessions to get people growing their own food in their gardens.
“If” he pointed out “there really was a need, as in wartime, for people to grow more food themselves...for a few in government it's insane that we subsidise the middle classes by letting them have very valuable urban land for leisure and recreation at rents that hardly pay for the cost of maintaining allotment sites”
I find these views uncomfortable but they exist. Richard Wiltshire is not against allotments, has visited them all over the world, but he’s also an economist. Best wishes, Simon

Clive Birch from the Birmingham and Districts Allotments Association, replies. I hear nothing from the VJA committee...


Simon. I've read this and similar viewpoints. We tried to involve NHS in agreeing allotment gardening was beneficial for patients with depression, stress and other related problems - they stated in writing that "allotment gardening was considered to be a middle class activity!" The quest for land suitable for development is ever with us [Victoria Jubilee!]. We are always vigilant and associations contact us immediately if they see strangers with theodolites or other surveying instruments. Regards Clive

Grayson Perry might regard our allotment as a penance. Richard and I went to see Perry's wonderfully woven tapestries in the Birmingham Art Gallery on Sunday. Last year, Lin and I had delighted in the sequence of TV films in which the artist visited the people and places that inspired his Rakewell's Progress from working class Sunderland via 'Eden Close' in Tunbridge Wells to new-rich Cotswolds via the anxious self-consciousness of the various gradations of middle class - All In The Best Possible Taste with Grayson Perry. The tapestries are threaded through with another dimension of art reference - as well as Hogarth's progresses - Harlot's and Rake's - Perry draws on Mantegna, Bellini, Grünewald, Masaccio, Crivelli, Jan Van Eyck, the Master of Flémalle, Gainsborough, Van der Weyden, and many images of the Vision of St Hubert and I bet there are others. Talk about layering - literal and figurative.

"I didn't see a single bicycle"
"One in the background by the canal in The Agony in the Car Park?"
"That's someone's who can't afford a car" I said