“IUD? IUD? What’s it stand for? 'Unexploded'. Yes. 'Device'. What’s the ‘I’? Ahah. 'Improvised'. I'm mulling this. Why IUD?"
I’m going over this between waking and dreaming and then I’m failing to get my mum’s attention, as she bustles around a house, full of her daily errands, re my plane ticket for a four day workshop in Berlin on 'Understanding Modern Germany'. Now I’m in a queue in a concourse which starts to advance to boarding and I’m in only the clothes I’m wearing. Not a moment too soon, Lin and mum bustle in with my boarding card.
"What about my things, toothbrush etc?”
“Sorry” says Lin
“A book?” I ask, more than vexed.
“Sorry, no”
“For f*ck’s sake, mum”
Then I’m apologising profusely to a sitting woman with a child who probably didn’t hear me anyway and isn’t English. I look angrily at mum, embarrassed at this highly public evidence of my dependency on the women in my life who have failed me, even though it was mum who booked me on the flight and this workshop that I’m not keen on anyway.
Mum looks back at me with one of her looks of loving chiding amusement and holds her gaze until her face fills my whole field of vision. I feel caught out, unshaven, unwashed but thinking I’ll buy what I need in Berlin but then I’m awake; relieved of these  responsibilities, aware this is the first time, that my mum, since she died, has had a part in a dream. 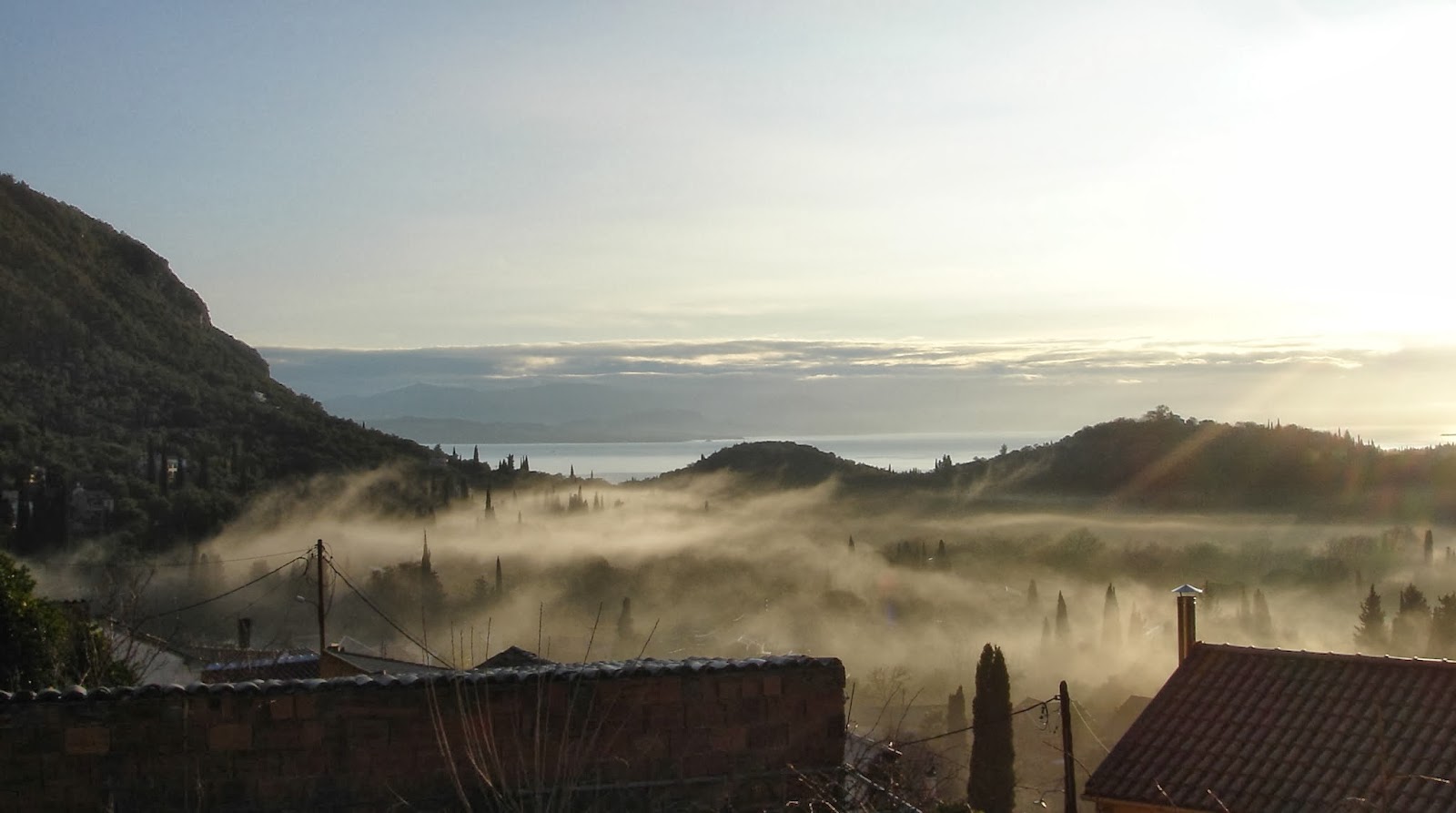 36 hours of rain and grey, but this morning is bright. Our windows need a clean and we’re going into town today, to the bank, the tax office, what else?
At supper the other day a friend said the 100 Club, an ex-pat subscription lottery charity run on the island, was collecting money to buy new tyres for the island's ambulances.
“There’s only one ambulance left on the island – of ten – that are still roadworthy”
Had I heard that the authorities have been round the coves on the north west coast and made all the tavernas take down their jetties – ‘they’re defined as illegal” - and remove their chairs and tables where they have spread to the shore. Boats can’t arrive and tie up for a meal anymore.
“Really?”
“And the charge on trip boats. €3000 a month! Most didn’t go back in the water last season. Wasn’t worth it”
“Blimey”
“And the new cruising tax for all foreign yachts in Greek waters applies this year”
“Will we have to pay?”
“Sure”
I ask another friend about this.
“It’s true but there’s no infrastructure in place to collect that tax.”
Best wait and see?
“Meantime all the gin palaces – over 12 metres pay €100 a metre - are heading off for marina’s in Croatia. I feel sorry for those people here who’ve bought a marina mooring for twenty five years”
We finally got a domestic water bill – for €6.50 – after two years of getting none. At the demos office in Ipsos Lin and I went through the empty hall of the building back from the front, up darkened stairs and along a dim peeling paint corridor to the cashier. Knocked.
“I am alone” said the woman there, as she processed and stamped our bill.
“Twenty five people left today – to their homes”
Blimey
“What does this bills cover?"
"The end of 2012”
She smiled wanely “We are late”
“The next bill…?”
“…will be for the beginning of 2013” she said.
At supper we heard an account of a Greek friend’s journey back and forth between departments within the tax office in the city, the demos office in Ipsos, and the main town hall in the city striving to get their renovated house designated as ‘old’, so that they stopped incurring the tax increment applied through their electric bills to properties defined as ‘new’. Over a series of visits she was referred to other offices and officials each claiming, with conviction, that redefining the status of a property was not in their remit. At last someone surmised - of another official in one of the offices already visited - that it was not that they could not do this, but “they do not know how to do it”
“She got on the phone and rang this other office and, over the phone, took her through the steps on the form on her computer required to alter the status of our property”
“Wow. Well done you - and her!”


Did I know,  asked another friend "Golden Dawn have opened an office in the centre of Corfu town.
“I saw all these police in town the other day. Roads blocked. One of the arrested leaders - Greek MP Ilias Kasidiaris - on probation, come to Corfu for the event, with other supporters." My impression is that there were more people on the street protesting against the eggvolk than there were representatives of Golden Dawn.
Με πρωτοφανή αστυνομική Δύναμη(120 περίπου) με χρήση μοτοσυκλετιστών και περιπολικών αλλά και όλη την Τροχαία έγιναν το απόγευμα τα εγκαίνια των γραφείων της Χρυσής Αυγής στη Κέρκυρα στη Πολυχρονίου Κωνσταντά και τους γύρω δρόμους.