Greece in winter - "Start with the shoe"

Last November I had an exchange of emails with Jim Potts, husband of the Corfiot writer Maria Strani, about Ano Korakiana’s self-taught sculptor, Arestides Metallinos Αριστείδης Μεταλληνός. I had sent him a DVD of some 300 photos of the works in the ‘Museum’ that Lin and I had been able to enjoy visiting.


Dear Simon. Just watched the DVD again, this time on the TV screen, with Maria. We both think they are brilliant. Maria did not find them at all ‘naughty’ or controversial (it's in the eyes of the beholder)…He could eventually become recognised as a major figure…At some point professional photos would need to be taken of individual works, with top quality studio lighting. But it's wonderful to see all the works, the DVD does the job remarkably well. Thanks again. Jim

Saturday morning Lin and I were having cake and - for me, a skirto, Lin, a glass of pomegranate juice - as we again visited Andrea and Anna Metallinos and their daughter Angeliki at the ‘Museum’.

Also with us was Irini Savvani.
I resign with reluctance to the idea that not everything that happens is a matter of chance or personal intention.  I met her on Wednesday passing in Democracy Street. She was with her daughter, Alexandra, coming from the bakery.
I said "Kalimera"
She said “Are you Simon Baddeley?”
“Yes”
“I read your blog”
After some pleasantries, I asked Irini if she knew of the village sculptor, Arestides Metallinos.
“Of course. But I have not been in the museum”
“You’ve not seen his work?”
“I met him at his house with my parents when I was a small girl”
I said that Lin and I had had the good fortune, after several years, to be able to see the collection – last November.
“I would like” I said “to see a catalogue made. Also a British friend to whom I showed the DVD that Metallinos' granddaughter entrusted me with, advised that a Greek art historian or critic should write a piece about the sculptor to accompany such a catalogue”
“I am an art historian” said Irini, with a smile.
We continued chatting. I remembered how vexing it could be to a child in hand looking upwards at grown-ups talking on and on about things important to them. Alexandra tugged, politely, at her mum's sleeve. (Is this what we mean when we say their conversation 'went over my head')
"Would you be able to meet with Angeliki and her parents, Irini?"
She nodded. The very moment I got home, after sharing this meeting with Lin, I phoned Angeliki and made an appointment that suited all of us at the museum on Saturday morning. I emailed Irini by way of briefing


Dear Irini. Thank you for agreeing to meet at the ‘Museum’ at 10.00am this Saturday morning. I will be there with Linda and we will be meeting Angeliki Metallinou and her parents Anna and Andrea to have another look inside the museum and have a brief look at Aristedes Metallinos’ work. Our meeting shouldn’t be more than 45 minutes.
I first saw inside the museum when we were in Ano Korakiana last November, having been curious about it since we came to the village in 2006.
Angeliki has convinced me that the work of her grandfather, a self-taught sculptor who didn’t start carving stone and marble until he was 67 years old, has for a variety of reasons remained almost unknown to the village and to the rest of the island. After she and her mother invited Linda and I to visit the museum we said we would see if we could help make this work better known. Angeliki gave me a DVD with photos of her grandfather’s work which I have shown to three friends in Corfu. In different ways they advise making a proper catalogue and having a Greek art historian help with this by writing an expert description. That you met the sculptor as a young girl growing up in the village and are now an art historian is why I believe our meeting last Tuesday on Democracy Street is ‘serendipitous’. Angeliki agrees and looks forward to meeting you on Saturday morning.
I wonder what you think of some of the illustrations of Metallinos' work on my blog:
Example 1, example 2 (especially!), example 3, example 4...
And this 'recrucifixion'
and this chimaera - the EEC
Aristedes Metallinos had many themes and seems a most fascinating man. Kindest regards. Simon

In my mind the place to start with any catalogue is Arestides' finely crafted stone shoe, made long before he began carving in earnest. Andrea could not unlock the show case so I took a couple of photo's through the glass. I would have liked to hold the thing in my hands and pass it round. Although Ano Korakiana was a rich village, Aristedes Metallinos' family were poor. In other circumstances a young man or woman who carved such an object in local stone - harder than marble - might well have been guided towards an artist's education. 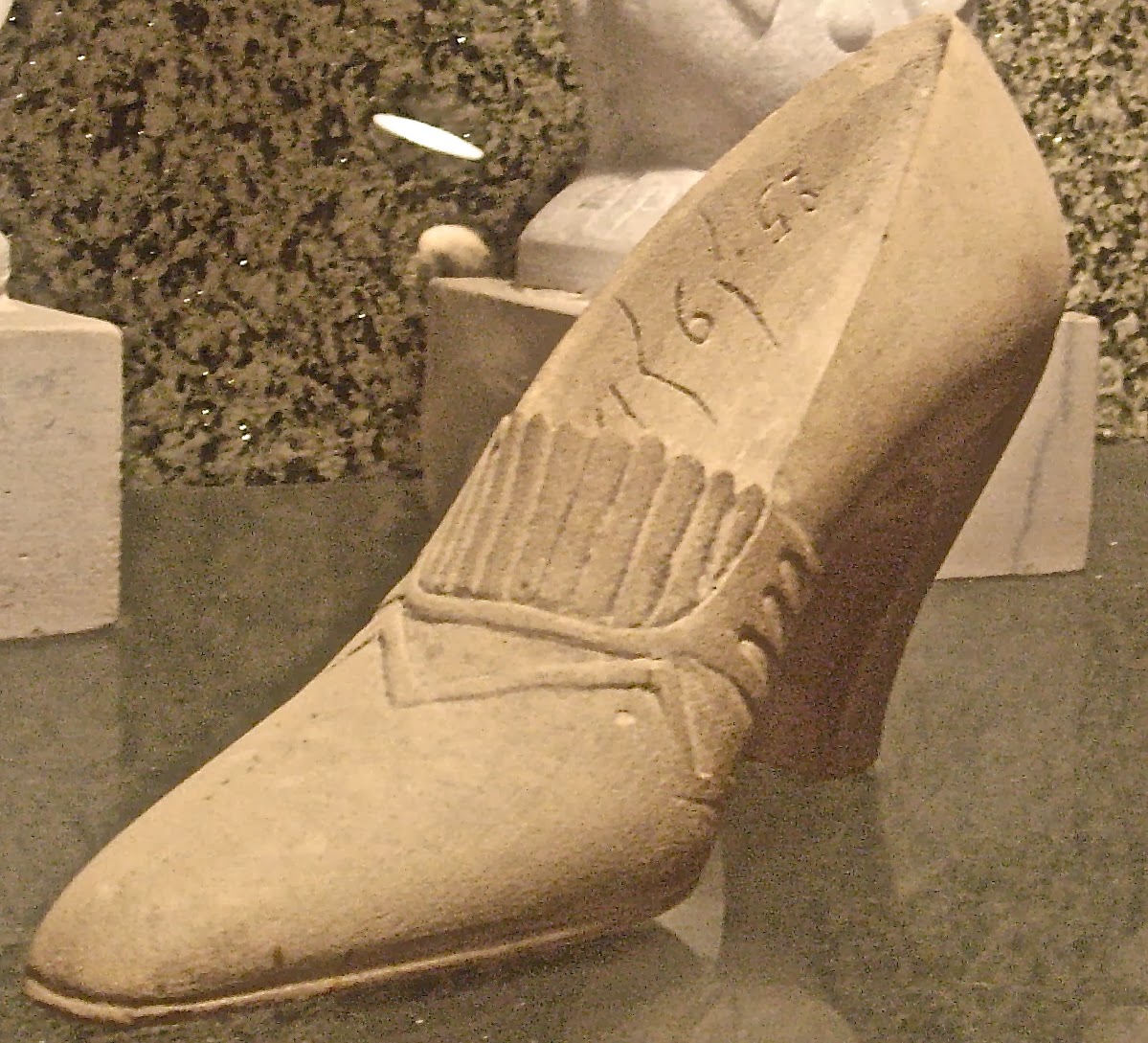