Robin, my friend, and neighbouring plot-holder, on the Victoria Jubilee Allotments has just circulated an email to me, and others who might be interested, having persuaded me, who really wanted to stay out of it and first prove myself a gardener... 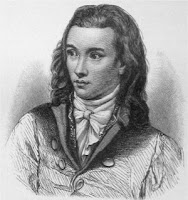 ....of Novalis' quoted by Conrad on the start page of Lord Jim - which I did for 'A' level English Lit - 'It is certain my Conviction gains infinitely, the moment another soul will believe in it.'

Dear VJA Members,
I am copying below a draft of a motion that I am proposing for consideration at the next AGM.  Simon has agreed to second it. If anyone has any suggestions for improving on this draft then please let us know as soon as possible. Otherwise please consider it as being here submitted 'as is' for inclusion in the AGM's Agenda and for the Motion and its Rationale to be included in the notices of the AGM.
Thank you, Robin (Clarke)

Motion for consideration at AGM 2013

Rationale for the following motion: A number of Members have expressed concern about lack of informing and consulting about what the Committee are planning or deciding. Even non-committee Members have to pay their rent (which more and more are finding difficult) and have to invest time in working their plots (which some find burdensome), and their membership needs to be respected and encouraged. We need to be attracting more new members and not risking disenchanting existing members by not informing and consulting them. In order to alleviate the hard work of running the Association, more plotholders need to be involved, and that cannot be achieved without keeping the entire membership better informed and more involved.

"That the following Annex be attached to the Constitution of the Association."

The important and key role of the Officers and Committee as volunteers enabling the effective functioning of the VJA is recognised.  However there is not any basis for some Members having greater or lesser access to information within the association.

Except where there is some consensually clearly accepted basis for making an exception:

(a) All meetings shall be open to and notified to all Members.

(b) All meetings shall be minuted.

(c) All meetings shall have as an opening item “Minutes of the last meeting”, at which draft previous Minutes will be corrected if necessary and then agreed.

(d) All Minutes and Drafts of Minutes shall be posted on the Notice Board and circulated to all members as promptly as is practical.

(e) (Subject to Clause (h) below,) Minutes of meetings shall avoid generalisations but instead make clear the specifics of what is being discussed and decided, such that the reader obtains the same knowledge as if they had been at the meeting themselves.

(f) Minutes of decisions of any significance shall name the proposer and seconder and number of voters, along with statements of rationale concerning the decision.

(g) Before any significant decision is taken the Committee and Officers shall endeavour to inform and consult with as many of the other members as possible, and take into account their views.

(h) In the event that a Member asks for some matter of their personal circumstances to be treated as confidential to only some others, then that matter will be proceeded with as appropriate on a case-by-case basis which may include not being reported in the generally-circulated Minutes or in a generally open meeting. 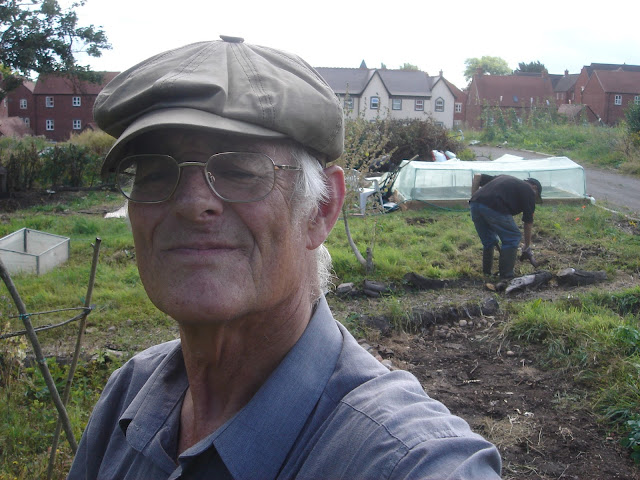 *** ***
There is a door in the high privet at the bottom of their garden - Amy's and Guy's home on the edge of city. When we visit I'm strongly persuaded to fetch the key to the padlocked chain... 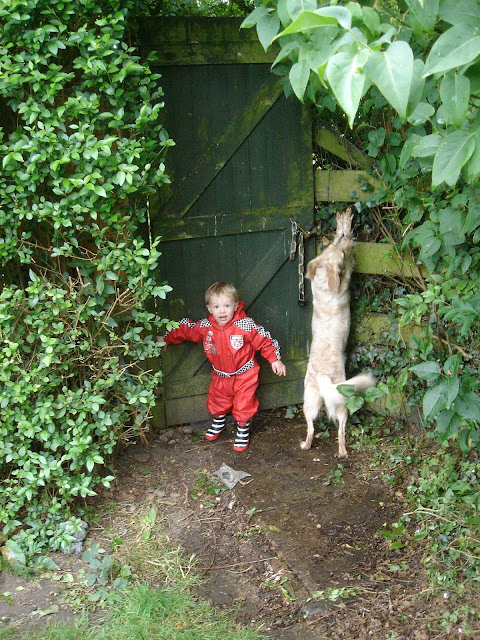 ...and head over the fields with dog Oscar, my grandson and Cookie. In no time the rain, spattering at first, is teeming down but we run carefree across the wet mown meadow towards the wheat field beyond, divided from us by a shallow stream at the bottom of a defile, Cookie with her spaniel instinct, dashing to and fro and Oscar, getting old now, following with me in straighter lines, observing Oliver, in wet wear, who chases one dog then the other until by the unmown field verge we follow it round working our way back to the door in the hedge. 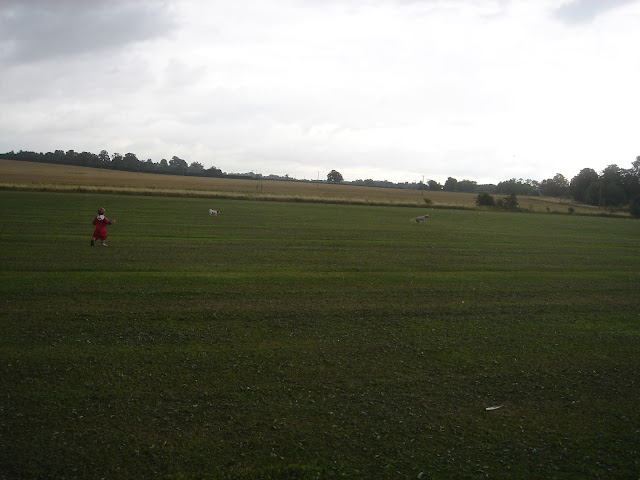 
From Democracy Street at Christmas 2008:

I remain intrigued with the possibilities that I am observing this crisis through the distorting lens of the present. Throughout my career the ideas of Fred Emery, my boss at the Tavistock Institute, for a few years after I left university, have periodically recurred - especially his thoughts on understanding future possibilities in a paper he wrote for the ESRC in 1967:


From Section III Methodologies for predicting the future: …It is not simply foolhardy to think that we may enable ourselves more readily to recognize the future in its embryonic form. There are almost certain regularities about these emergent phases. Social processes which, in their maturity, are going to consume significant portions of men’s energies most likely have a lusty growth. They do not, by definition, command human resources at this stage, and hence their energy requirements must be met parasitically, i.e. they must in this phase appear to be something else (my italics). This is the major reason, we think, why the key emergents are typically unrecognized for what they are while other less demanding novel processes are quickly seen. A social process which passes for what it is not should theoretically be distinguishable both in its energy and informational aspects. Because it is a growing process, its energy requirements will be substantially greater (relative to what it appears to do) than the energy requirements of the maturer process which it apes. Because it is not what it appears to be, the process will stretch or distort the meanings and usage of the vocabulary which it has appropriated. F. E. Emery (1967) 'The Next Thirty Years: Concepts, Methods and Anticipations' (excluding FEM’s 1997 postscript – in the year of his death), Human Relations, 1967, 20, 199-237. p.15

This suggests we should assume that what is really happening lacks, for the moment, the characteristics of a whole or a gestalt, that can be named and analysed. What may be emerging may have a 'lusty growth' - but currently exists as a diversity of disconnected trends and events - unjoined dots - which may, with the benefit of hindsight, be seen as converging. Though this is the result of human actions, inevitably imperfect awareness of these possibilities can induce the false causality of millenarianism, cargo cults and conspiracism - paranoia made confusing for occasionally being nearly correct, as with astrology. Fred would suggest looking out for the debilitation caused by parasitic action on familiar institutions. From where is energy being sucked? Where is it going? Is language being stretched, distorted, 'appropriated'?

On Friday I gave a talk and led a discussion on 'The Politics of the New Order' to officers participating in a four day Summer School at the University. I spoke of what could be discerned and what could not, what might be certain and what might be a matter for speculation, developing my talk around the challenges of working in that space where politics, management and professionalism converged and overlapped. What of localism and the vision of devolved power? Is there a real willingness to place trust in the judgement of the demos; a serious pursuit of democracy - one that would dispense with Plato's guardians - the oligarchy essential to his ideal democracy? Should we be more sceptical, regarding democracy as just another form of government whose machinery requires constant maintenance by experts. This would be Maine's contention, with his convincing scepticism towards 'popular government'. Can't popular government be a root to tyranny, the return of the folkish? I used the idea of a temporal gestalt to describe the difficulty of being sure what was happening. How many words do you have to hear before you know the phrase? "To" I said. People looked expectant and puzzled; "to be..." I said, and everyone instantly recognised Hamlet's soliloquy. "Never..." I said with lisping rhetoric and all knew I referred to Churchill's praise for 'The Few'. We inevitably struggle to recognise the form and direction of what is spoken of as 'localism'.  What gestalten - wholes - might be conjectured? Are these the culmination of an existing and recognised development in government? What might be something new evolving - unrecognised - inside the camouflage of the familiar? I spoke of paradigms, especially those competing for and against the idea of diffused power; how alien this was to a population historically steeped in hierarchy, unfamiliar with and distrustful of equality even though sentimentally attracted to the idea. At the end I slipped in a mention of Elinor Ostrom's Governing the Commons - and her idea that since neither states nor the market have been uniformly successful in solving 'common pool resource' problems, there might be other ways to govern public goods.
Posted by sibadd