Simon. Have you seen the results of Local elections? Extraordinary results for UKIP who took 25% of the votes. In Lincolnshire they now have 16 councillors, having had none previously and the Conservatives lost overall control…This may be paradigm change or just a protest vote but I feel it is part of fundamental changes in the political landscape in Britain which the main parties are struggling to understand and respond to. I don’t think they are prepared to acknowledge the following or know how to deal with it. There is disconnect between the main parties and a large section of the population and this vacuum has been filled by UKIP.

a) We are now entering the post-welfare society. The welfare state created after 1945 is quickly being dismantled. This is now irreversible. We have crossed the tipping point. There is no narrative for this (yet). The alternatives are emerging by default through a strong emphasis on ideology.

b) Continuous Growth is no longer possible along historic lines. At best we will bump along the bottom with a few temporary ups followed by downs. We have entered the post growth society; again without a narrative or alternative models being formulated. This will bring equality/inequality to the fore.

c) For the first time in very long time, the next generation will be financially worse off than the last. This runs contrary to all our expectations. We are very badly prepared for this. There are some grave inter-generational implications.

d) Democracy in its current form becomes unable to shape events; may even struggle to respond properly to events, increasingly becoming just a battle field for competing interests among the new feudal elites or even just their mouthpiece. The narrative is centred on persuading the population that what is in the interest of the new feudal elite equals the national interest. Politics becomes narrow, oppositional and, to many, irrelevant, focusing on what is perceived to be controllable or the cause of malcontent (e.g. immigration, welfare benefits, EU membership, etc). Evidence is replaced by ideology in policy formulation.

e) The so-called Third World is overtaking us in the economic field. Our political clout is waning; theirs is increasing. This will play into domestic politics.

I am trying to weave this into the dialogue we have had so far. I am trying to create a framework which can accommodate these trends and hook the other points we have made on to it but I am struggling a bit. When are you back. I am happy to make the trip down to Birmingham. Could do with chewing these things over with you. Best Jan 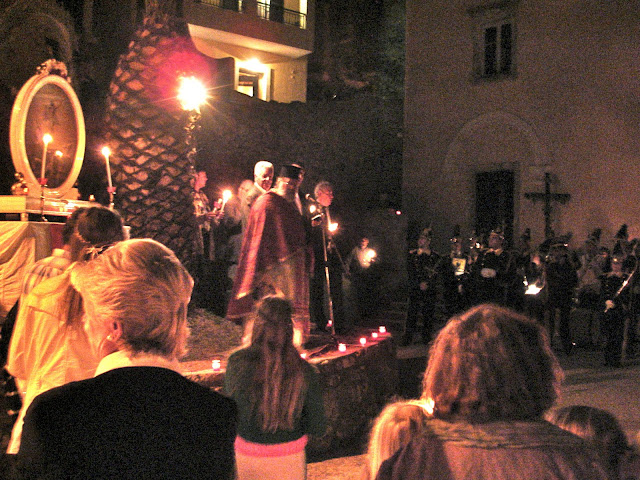 Dear Jan
Linda and I were at the midnight ceremony of the resurrection, an event marked with special delight across the Orthodox world and, in Greece, deemed more important, until its commercial potential raised the profile of Christmas, than the latter. We’ve been speaking of narratives. I’m not about to betray my atheism – an unsatisfactory label if ever there was, but I’m gripped to the soul by the economy of a story that can fit so much truth into less than a thousand words; one that holds its plot as a magnet attracts iron filings; oil for bathing feet, water for washing hands, nails, darkness and light, palm leaves, rapturous displays of public adulation turning, terrifyingly, into the midnight howl of a lynch mob; calm, kindness and generosity as cues for mockery, execration, torture and judicial murder; fear of pain, temptation to escape, resignation, betrayals by the closest of friends, the mingling of secular and religious politics, conspiracy and bribery, establishment fear of the mob, the feebleness of a career administrator, despair, desolation and sorrow, acts of sudden kindness, courage and love. This inspiration of artists is endlessly fertilised by experience - war, crime, persecution, domestic and public drama. Irrespective of time and place it’s a narrative, more gripping than any I know. Its truth, for the faithful, is tied to time and place, yet the bell tolls and the cock crows in a story that renews itself outside time and place, gathering abundant evidence, including our hope for magic - the joyous ending Lin and I celebrated with fellow villagers amid chimes, singing, fireworks, kisses, embraces between family, friends and, proffered shyly but genuinely, to foreigners, often with the excuse to relight a blown out candle with a fellow flame, as a stranger said, “brought to Athens by plane from Jerusalem this morning” adding, with a rueful smile, “so they say”.

So you and I are in tune on the matter of narrative – the need for one that can get some grip on the reality of our current circumstances. To borrow from Lord Grey “plots are being lost all over Europe” - probably beyond – and we may not see them recovered in our lifetime. The many headed public is gathering snake-oil narratives with enthusiasm inventing the facts to make them work, as we can all do so well. ‘Intelligent criminals’, mountebanks, hucksters, profiteers (especially) and populists are enjoying the confusion, fashioning common-sense interpretations of what’s going on from rumour, speculations, distortion and amplification – the common vice of gossip. The shadows they make real include a profusion of lurking invasive ‘others’; proliferating foreigners, a continent of bureaucrats, a mass of work shy benefit thieves, neighbourhood fanatics plotting destruction, malign and invisible forces conspiring to contaminate and destroy what matters to decent folk. Best wishes, Simon

*** ***
“Lin. Come quickly. Look what I’ve found upstairs”
She hurried upstairs from the shower. I had nearly trodden on a slowworm* that was working its way across the carpet.
“What have we got to pick it up?”
“Dust pan?”
“No” 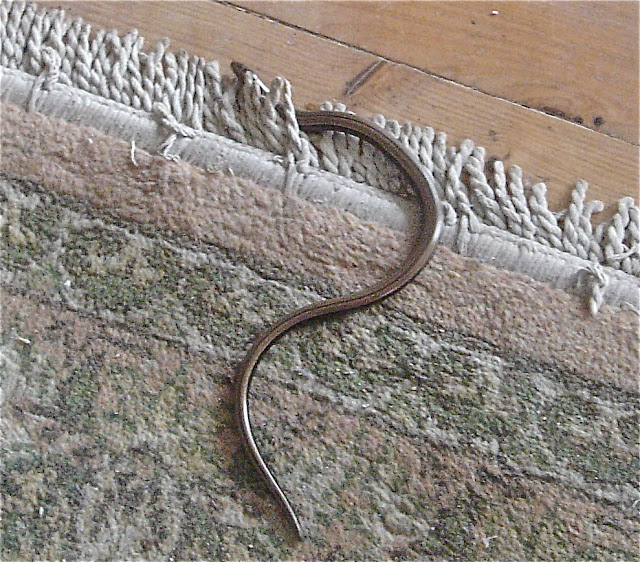 I brought over the waste paper basket. We both bent over and coaxed the little animal in the right direction.
“Don’t frighten it”
“I don’t like to pick it up. You can damage them”
“It’s wriggling in the right direction”
“Whoops it went under”
“Pull back a bit”
“Now push”
“It’s in”
We were both without clothes, a tableau for an elderly Adam and Eve encounter with the serpent…
“...or a sketch for the Sigmund Freud Charity Ball. How the heck did it get in here? Up our stairs or our outside steps?”
I dressed and released the slowworm – so vulnerable and blind - into the grass by the path below the house. A slow-worm on the top floor of our house? What deity was making itself manifest, with what significance? In the village outside and inside are negotiable. 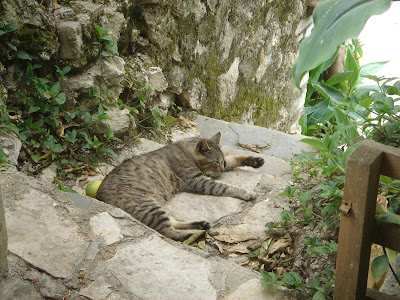 Most cats here recognise a human threshold, and unlike wasps and flies and mosquitoes know or swiftly learn not to cross. But they have no knowledge of public and private outside treating street and garden as the same. Swallows nest in eaves but do not enter the windows of occupied houses. The few ownerless dogs that pass live in the street and recognise a garden gate.
*Could it have been a Peloponnese slow worm (Anguis cephalonnica)? On 2 June, Bo Stille, a zoologist graduate from Lund, tells me on Facebook that in Greece this is considered a Greek Slow Worm, Anguis graeca, Ελληνικό κονάκι.