'Back in 2007 the Stern Report warned of the future costs of climate change. But it looks like its happening now. News reports of freak storms and forest fires in the USA, repeated floods in the UK, unseasonable fatal avalanches in the Alps, and yet the impact on subsistence farmers in other parts of the world has barely been reported, let alone counted..' .from a blog by Martin Stott, Sustainability Consultant for local government and beyond

"Martin, I promised myself that the vegetables on our table at Christmas would be from our allotment. They won't be."
"It's been a terrible year, Simon. My allotment was under water for weeks""
"You're kind. Onion fly, slugs, pigeons, rain rain rain - in June and July especially"

"Lots of people have been abandoning their allotments"
"Because it's a lot harder than they realised"
"Also there's such demand. People are getting evicted"
"Yeah. It's all these gardening programmes making it look simple."


In the papers: ...They're to blame for thousands of allotment holders being evicted from unkempt plots....novice gardeners are becoming down-heartened...abandoning their plots to weeds and neglect...an estimated countrywide waiting list of 200,000 for plots, a record number of allotment holders...have been asked to vacate their land, for leaving their soil unworked...surge has been blamed on the popularity of gardening show...Steve Johnson, an allotment rep at Beverley town council, in East Yorkshire ~ “People see these gardening programmes that make it look easy. It’s not like that. They get very depressed when they see the weeds and they abandon it.”

Reg Knowles, Allotments & Gardens Council “Unfortunately people watch the gardening presenters on TV and don’t really see how they have a paid team working seven days a week on their plot. When they realise they have to do all the work themselves, it’s a lot and you have to be able to put the time in. People think allotments are easy to maintain but it’s been a bad year weather-wise and people have got disheartened and not bothered doing their plots. You’ve got to be honest with people. The worst thing you can do is not tell them how much work it is.” In Brighton, 1070 notices to quit have been issued...more than a third of the council’s plots but a bite into a long waiting list. Merton Council...has issued 378 notices to quit...almost a third of its 1364 plots. Allotment holders with untended plots in Beverley have been warned to “use them or lose them"...

Martin and I were chatting on campus; a Christmas get-together of Inlogov staff on the 4th floor of the Muirhead Tower, planning ways to put the world of local government - in most distinctive crisis - to rights.


*** ***
Χωρίς ελληνομάθεια, δεν υπάρχει παιδεία
As of October 2013, the Cambridge Faculty of Medieval and Modern Languages will suspend the teaching of Modern Greek as a full Tripos language on financial grounds. If the proposed changes go ahead, no student will emerge from Cambridge with any more than a cursory knowledge of Modern Greek language and culture.....
Since posting this petition in the first week of December, it's received 10,700 signatures
*** *** ***
I gave a talk at Sheldon Library about The Founding of Handsworth Park. Arose in the wet and set out  for New Street Station where I caught a train to Marston Green. I embrace these drizzling grey wet days, donning full wetwear, including my cosy waxed gloves, putting a waterproof cover over my pannier. From the station I pedalled along a wet path strewn with sodden leaves and paused at the end of the runway as a holiday plane full of passengers from a warmer drier place arrived in Birmingham. 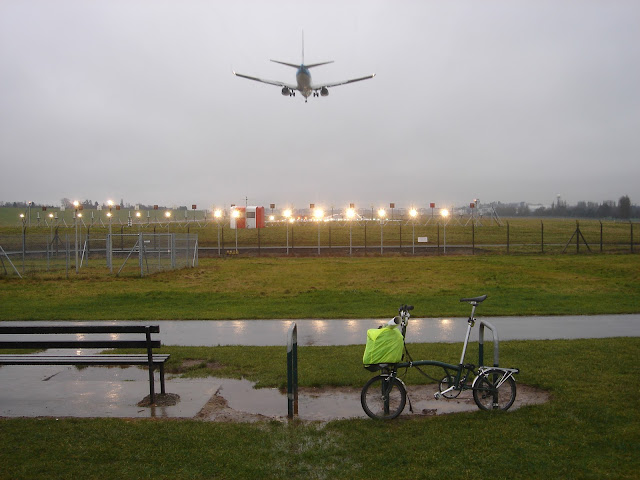 I enjoy talking about Handsworth Park. My audience - about 15 people around my age, umbrellas and raincoats stacked in corners beneath bookshelves, my folded bicycle and dripping rainwear drying by a radiator. I strive to evoke a feel for those ancestors of ours who 120 years ago decided Handsworth should have a park


As the civic gospel of municipal improvement spread from Birmingham into the estates of Handsworth, its local government leaders saw a public park as a benefit for the district. Following the setting up of an education board and a free library, the adoption and proper kerbing of roads, street lighting, tramways and the construction of sewers,1 influential voices in the district began to speak of the need for a “lung” in the city. They did not pursue the idea simply out of expediency or to raise the value of their properties. Such self-interest was present - used unashamedly to strengthen their case among the practically minded citizens of Handsworth - but opposition to the Park from that quarter was at times so intense that calculative motives alone would not have carried the project through....

Back into town afterwards. Bought a tray of fish and chips with curry sauce and ate it on the train - relishing its sogginess. Still drizzling on the way home with £25 extra pocket money in my pocket. I treated myself to the ride under the Hockley flyover, through its messy underpasses, smelling of wet cannabis, surfacing by the bill boards at the foot of Soho Hill, a mile from home 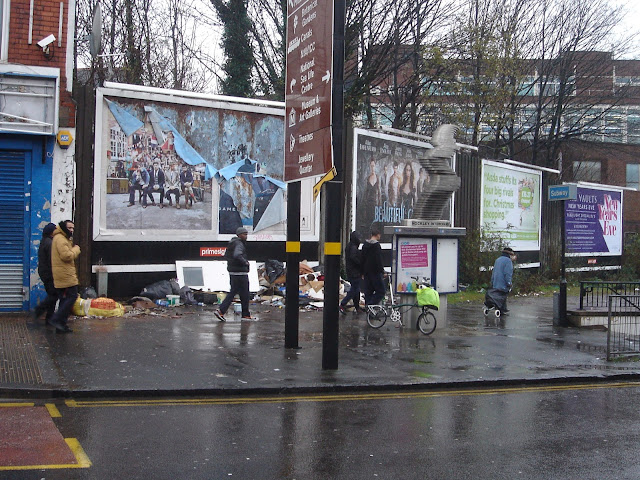 Our front door's decorated. I'll put up the tree on Friday evening.Start to lay presents under it.
As soon as I was home Lin asked me to take Oscar for a walk, so I headed in the dark to the allotments unlocking the pedestrian gate and wandering through the deserted site to my shed, confirming to my relief that tho' my crop has been so disappointing the ground looks tended, my shed shipshape and dry inside despite the surrounding damp.
Oscar and I strolled home in the continuing drizzle. Amy and Guy arrived with Oliver, followed by Richard and Emma. Tea, coffee, all round and a chance to dandle the babe, my wet clothes laid out in the boiler room. 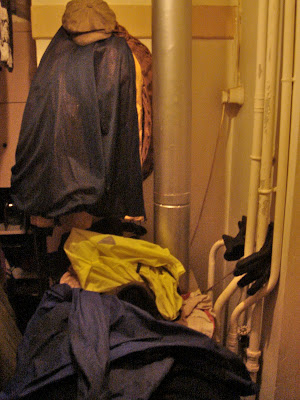 We announce that the customary communal Christmas concert of the band and the choir of our Philharmonic will be held this Saturday 22/12/12 at 1900 at the Church of Saint Athanasius, followed by treats for all. Also the choir of the Philharmonic will go around the neighbourhoods of our village singing carols the morning after the Christmas liturgy. They will be accompanied students and members of the Board for the traditional collection in aid of the Philharmonic. The Chairman and Board wish a wholehearted Merry Christmas and Happy New Year.to all residents of our village.