The interior of Saint Athanasius has been captured in a wrap-around photo made a few years ago. It is an exquisite sacred space - at night bejewelled by light. 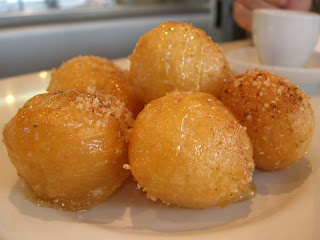 The Korakiana Band and Choir held a beautiful and 'heartwarming' Christmas event of music and songs on Saturday night in Saint Athanasius - a space radiating, as no other, the 'spirit' of the season. Introduced by the President of the Music Association, Spyros Savvani, the musical part of the evening closed with local Carols and prayers in the Basilica, after which Elektra and Natasha had prepared loukoumades...

*** **** ***
Back in October when we were in Ano Korakiana Mark Steel came to The Drum to do a show about our home in Handsworth... 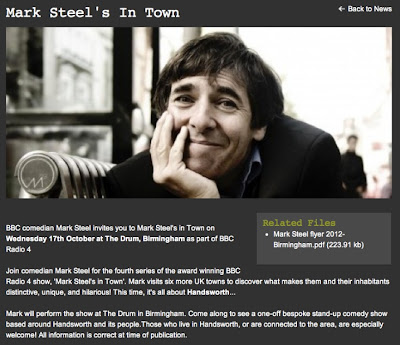 ...broadcast on Radio 4 on 12 December,  it  includes a choice remarks from Vanley Burke, Aftab Rahman and Benjamin Zefaniah; a hilarious well researched stand-up delight; affectionate too. Among other things about my favourite part of Birmingham and where I'm proud to have lived over 30 years, it covers the Lunar Society, riots and racist Allotment gardening and mentions the park....
*** *** 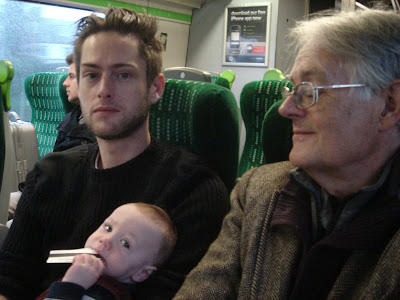 On Saturday the Severn was full tipping over its banks onto the riverside walks, its turgid surface wrinkled by the pace of the flood. We glimpsed it from the high rail bridge out of Worcester as we headed for Great Malvern to buy Christmas presents.
Our train from New Street was diverted to avoid signal problems near University station. Other local trains were cancelled by flooding. I enjoyed the company of my family - especially on a warm and comfortable train. Last year we'd gone to Shrewsbury. Oliver was not yet with us. This year Malvern's shops were disappointing. The many charity shops offered little of interest. In one I treated myself to two used books for myself - Pompeii by Robert Harris (We hope to visit Pompeii or perhaps Herculaneum when we go to Naples on the way to Bari and Corfu), and Heinrich Böll's The Train Was on Time and, in a smart cheese shop bought myself a slice of Stinking Bishop. I was signally failing to find something suitable for the rest of the family. The few antique shops were full of modern unashamed fakes and items made of resin. There seemed to be more banks and estate agents than retailers. The craft shops were trying to sell familiar novelties and familiar tat from modern China  - cheap transport, no trade barriers, sweated labour, excellent ports especially Hong Kong and feckless use of fossil fuel (but this will not last).
"We're seeing the hidden impact of on-line shopping" I said to Richard who'd reminded me when I'd seen something I might have liked "You can get those for far less on the Internet."
The heart's gone out of street shopping. I enjoyed some real ale in a pleasant pub with a panoramic view over the wet misted plain below the Malvern Hills.
"Let's get a train back to Worcester"
We wandered briefly through the well lit shopping streets that run through the centre of the larger town, but found nothing that tempted a purchase. Guy and Amy gave up earlier and left with Oliver. Richard and I stayed on an hour wandering through drizzle, peering in lighted windows, hoping to find a shop that would tempt us in to spend our money.
"It's hopeless" I said 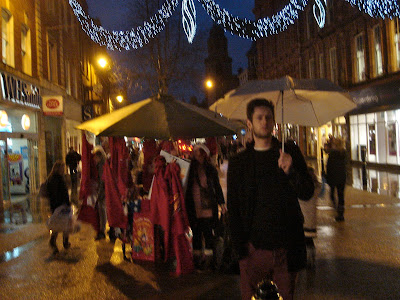 We bought a sausage baguette - 99p each special offer - no receipt and no mustard. Here too were many estate agents, craftless craft shops, endless familiar novelty items from Chinese sweatshops, plenty of eating places but we weren't hungry.
"Let's head home" we agreed.
The station platform was packed, the train filled with people, who left it at the next station Bromsgrove. The rain was unrelenting.
"What a frustrating day! It wasn't that I saw things I liked I couldn't afford. I saw nothing I liked"
"Me too" said Richard
From New Street I trudged down to the markets - stalls packing up - to catch a 16 bus, touched my concession card to the sensor by the driver. Sat reading I missed my stop by the park and walked back home along sodden streets down the slope past St Mary's Church from the edge of Handsworth Wood, in time to help Lin unload shopping from her car. We bickered.
*** ***

My allotment looks at least partially worked. It's not waterlogged despite unceasing rain and warnings of flooding round the country. There are dead bees lying outside their hive, signs of housekeeping and cleansing. I'm reassured by Gill, whose hive it is.
"The other bees carry their dead outside. The rest seem fine. I'll feed them in the next few days" 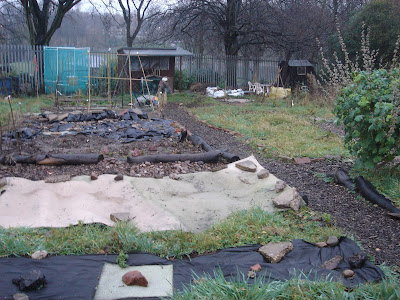 In our garden, even here, perched on a north facing hill on the Midland Plateau far the over spilling rivers Severn, Avon and Trent, we've our own untidal acqua alta across which I've laid spare paving stones to the shed. 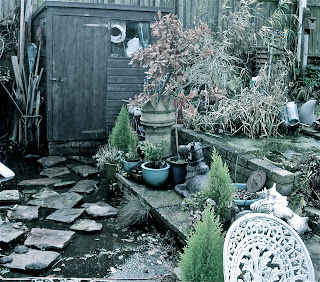 Rain clattered on the conservatory roof, a pair of jackdaws tut on the tiles - "foolish men" - and a warm wind strengthens, blowing steadily round the house in the night.
*** ***
From Ano Korakiana on Christmas Eve:

Characteristic of this year's celebrations is the poverty - deprivation and uncertainty for the greater part of our country's people, all experiencing the economic crisis in their own way. Yet it is an opportunity to celebrate  simply, daily, without luxuries, christianly, returning to habits that in the old days filled our souls…if not the stomach.
*** *** ***
...and another obit for mum, this time in the Herald Scotland:

Born February 11, 1917; Died November 1, 2012.
Barbara Burnett-Stuart, who has died aged 95, embraced each new unfolding era of life with enthusiasm and a sense of adventure. And it was an attitude that served her well – taking her from a privileged London childhood to country farm girl, Vogue journalist and diplomat's wife to war correspondent, magazine editor, publisher and finally matriarch in rural Scotland, where her zest for life continued unabated.
Always forward-looking, she delighted in the new, whether it was acquiring a joint share in a pair of llamas in the Highlands, cracking the mysteries of email and Skype or seeking out the best iPad at the age of 95.
Born in London's South Kensington, she was a nursery child until her mother decided to acquire a weekend farm cottage in Clavering, Essex and, ultimately, start her own dairy business.
It introduced the little girl into a whole new world of country life which would later form the basis of many of her publications.
Back in London, young Barbara, the daughter of a Government Code and Cypher School founder who was also a secretary to Queen Mary, did The Season and came out as a debutante in the 1930s. A job with Vogue magazine followed and during the Second World War she married her first husband, diplomat John Baddeley, in her beloved Clavering.
They went on to have two children and she continued working, becoming an accredited war correspondent for Vogue. Among her assignments was a trip to Vienna in 1946 as Austria struggled under Allied Occupation.
A few years later her marriage was over and she had left Vogue but was on the way to becoming a successful magazine editor. She worked on the weekly publication Home Notes and later established and edited the women's section of Farmers Weekly.
By this time she had met journalist and broadcaster Jack Hargreaves with whom she had a long relationship. She spent 14 years at Farmers Weekly, writing and commissioning articles on the countryside and country living, the home, produce and recipes.
Although the couple never married she changed her name by deed poll to Barbara Hargreaves and published and edited numerous books, including Handbook of Country Crafts and The Sporting Wife: Game and Fish Cooking. She also used the pen-name John Bedford and edited books on subjects such as renovating old furniture, pressure cooking and deep-freezing food.
After leaving Hargreaves, in 1965 she married Angus Burnett-Stuart, head of Thomson Regional Newspapers, whom she had known as a teenager. Determined to remain an independent woman, she continued her publishing career while they lived first in Cheshire and then at Mains of Faille near Daviot, Inverness-shire where they moved in retirement.
Widowed in 2005, she moved, aged 88, to a smaller house at Inverarnie but continued to be involved in the local community life where she had worked for various causes, including the Samaritans.
An endless inspiration to those around her, she is survived by her children Simon and Bay, step-children Fiona and Jennifer and extended family. (Alison Shaw)