Weight of rain water brought down a wall on a garden below the house, dropping stone and sodden earth across the path to the lower road. Next day, Petros, a neighbour, was down there with help, rebuilding the wall, clearing the path.
*** *** ***
Last night we were round a table at Elizabeth’s in Doukades Δουκάδες, 8 kilometres west of Ano Korakiana, down a winding country road beyond Skripero – a turn off the Sidari road that's tricky to see in the dark, but I’d cycled along it a couple of times. You rise on a zigzag towards lights, park below a sharp corner, and walk into an inviting platea surrounded by tavernas – two including Elizabeth’s used by villagers. The road passes unobtrusively through it toward the Paleo road.
Tim and Henry and Mark sat one end of our table, Cinty, Paul, Sally and Lin, the other, me in the middle, getting to switch between conversations. I was immediately greeted by Elizabeth as I looked for the WC, wandering towards the kitchen
“Hullo, Good evening. That way, unless you want something to eat”
A moment later I said “How do you expect me to learn Greek if you speak such perfect English? Ego, meno apo stin Ano Korakiana”
I have prepositional dyslexia, which is another way of saying I’ve yet to master the art of inflexion – where the preposition must match the gender of its reference.
“Posa kronia?” she asked. She meant I realised later how many years had we lived in Ano K, but I answered with my age.
“Eimai enenenda kronia”
She looked surprised and stood at our table told them how good I looked at ninety.
“Oxi, oxi, evdominda, eimai evdominda, kai exei kronia stin Ano Korakiana. Mitera mou einai enenenda! Eneninda pende.”
But it was too late and I’m now 90 and target for a good teasing.
Cinty and Paul were back from two weeks holiday on the northern mainland beyond Epirus, in the north west corner of Greek Macedonia, where Greek, Albanian and Republic of Macedonian borders meet below the waters of Lake Prespa; intensive bean farming country, hence the green waters of the lake - over-rich with nitrogen run-off. 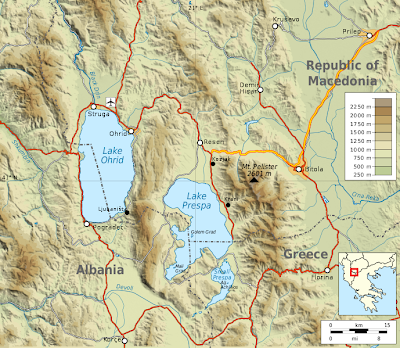 “How can anyone farm these days and make a living without farming intensively?” I said “The Common Agricultural Policy goes with market forces paying lip service to sustainable agriculture. It’s the choiceless trend of mechanisation. It’s progress until we invent an alternative to communism and capitalism because we’ve assessed the collateral damage of intensification. We might as well grow hydroponically for all the care actually taken of the soil. Ground has become a place to plant - with added chemicals.”
But Paul and Cinty had had a really good time, describing to us the superb quality of the places they’d stayed - an antidote to my grim description of the tourist facilities we’d walked by a few days back round Gouvia and Kontokali (I except the really smart hotels like the Corfu Imperial from this critique – since they’ve made public beaches clean and attractive by more or less fencing off a resort from all but their customers).
“The owners had really worked on these places” said Paul “Brilliant food and plenty of it. Rooms luxurious, with big comfortable beds. WiFi taken for granted. We got good prices perhaps because we were there just between end of summer and the start of the skiing.”
Cinty, who cooks professionally, waxed enthusiastic about a particular meal they had, about the salad, the mezes, and river trout for their main course.
They described too how professionally their walks, amid magnificent scenery, had been; stewarded – kept maintained and discretely signed.
We discussed the art of conscientiousness; how good it was to work with people who understood the importance of detail when doing business.
“Yes. Corfu has wonderful trails, marked out and mapped by people who loved and cared for the island, but see how little support they get and how the walks go unadvertised but for a few local people in the know. Trails overgrown in too many places, Not looked after regularly, sometimes even built over and fenced off.”
“We sometimes call people ‘anal’ for their preoccupation with getting things right. OK that’s right. That’s good” I said “It’s about knowing that when people are guests they want some re-creation of the studious sensitivity to their needs that goes with private politeness.”
“And you know” said Paul “when we were adding our complements to all the others in visitors' books the only people who’d made negative comments were Greek”
I grumble about the commodification of philotimo contained in tourism, but at a certain point the craft of good business melds the private and the public; the domestic and the economic. A business can be managed so beautifully, that it comes almost to match the care that goes with the hospitality of neighbours, friends and family. Such achievement requires exactly the level of dedication missing from the exploitation of Greece by the behaviours and people who are excoriated in Maria Strani-Potts diatribe against the Pimping of Panorea – the pimping of everything beautiful on the island.
For anyone who aspires truly to succeed as a human being in the business of tourism, Maria’s short and powerful parable should be compulsory – it makes compelling reading, a passionate cry of outrage at the slow ruination of a culture by greedy and incompetent people lacking respect for those whose money they took for the goods and services they offered, trading on goodness and beauty they forgot or never understood.
It warmed me to hear Paul and Cinty describing how they’d been treated during their well-earned holiday in Macedonia.
“It helps” said Paul “that there are people from three different countries round Lake Prespa working together to make the local tourist economy work”
What a delight to hear an account of a place where the the idiocies of nationalism and the squabbling of scurrilous nationalists has been put aside in favour of co-operative commitment to the success of a local economy. I’ve just finished Louis de Bernières Birds Without Wings - a book which I suspect could not yet be written safely by any Turk or any Greek, and will not bring tourists to the south west coast of Anatoli, as Captain Corelli's Mandolin encouraged them to Cephalonia. Birds Without Wings is...


…dedicated to the unhappy memory of the millions of civilians on all sides during the times portrayed, who became victims of the numerous death marches, movements of refugees, campaigns of persecution and extermination, and exchanges of population

At table in Doukades I was hearing about Albanians, Greeks and citizens of the country of disputed name – Republic of Macedonia - that marches on the Hellenic Province of Macedonia. I’m sure there are similar people of equal gifts and commitment to making tourism work, here and in other parts of Greece. It is a matter of timing and leadership and bright sparks of courage and inspiration.
Dispersing to go home.
Mark said “Go go you two. You know I don't like long goodbyes”
We left cash for electric bills and tax and various bits of information for the lifting of Summer Song and the changing of her engine. Wednesday is tidying and packing day, and washing if the weather’s right.
Yesterdayday I’d been down to do a final check on Summer Song, replace her shredded Greek courtesy flag, and hope that when we see her again she’ll have a working engine and the gremlins have stayed away or at least been forgiving ones.