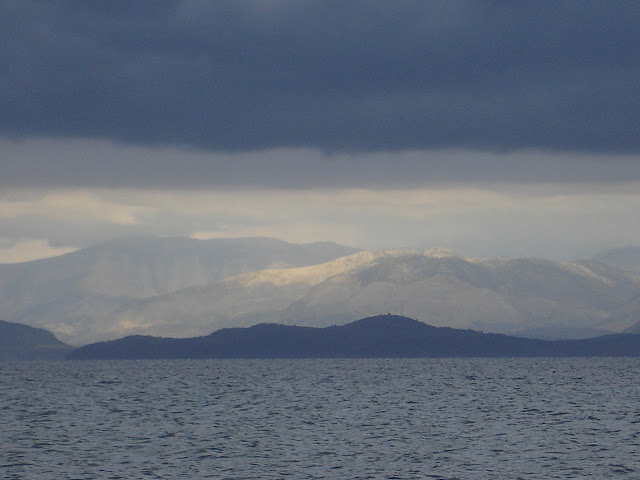 This weather of light showers and minor breezes below grey overcast seems to bring torpor. It’s undramatic, no thunder, no lightning, no determined noisy downpours. After visiting the Lighthouse, shaking hands with Pastor Miltiades and sharing a goodbye hug with Carol - “Have a wonderful Christmas” “See you in January” – we bought ourselves giros at George’s in Kontokali and ate them as we strolled the gravelly shore of Gouvia Bay. Lin trailing me.
“It’s not a good idea to leave your shirt tucked in, Simon”
“You mean I’m looking like a paunchy slob?”
“As my dad would say, like ‘a sack of muck tied up ugly’”
I laughed and pulled my shirt out so it hung loose round the pockets of my jeans.
“I love you’re dad’s phrases – that one especially”
Arthur has another one for a threat of rain “It’s a bit black over Bill’s mother’s” and that reply to a query “What day is it?” “Wednesday. All day”
Sounds were muted. Two sails stood in the distance, captured by two brush strokes on a faded tile. It’s the end of the season. We picked our way over the beach territories of closed apartments, an empty hotel, shuttered cafés, fronted by stacks of loungers secured by chains, and the stumps of parasol holders. Alien palms and yuccas fronted the indigenous eucalyptus* and oleander and wild verges, the elegant greenery of older Corfu. Low concrete walls mark the boundaries of a commodified shore, selling sea, sun and extras – boats and jet skis for hire from jetties now stripped for winter, platforms for water skiing and gliding; tattered faded flags drooping from rusty poles. In one place was an accretion of concrete rocks topped by a fibreglass dolphin, chipped and cracked, surrounded by a shallow pool crossed by a rough concrete bridge.
“That must have been built over twenty years ago” I said.
Further on were more small home-made jetties missing planks, some completely dilapidated, to which were attached fibre glass speedboats, some with awnings. One wooden boat, well looked after, stood out - fine lined and well cared for. Other boats looked as neglected as cars whose owners can’t really afford them any more but can’t quite bring themselves to look for a buyer even were one to be found. All along the shore lay rubbish, pulverized water bottles, plastic bags, discarded drink cans, gradually bleaching and mixing with the ground, disappearing beneath the tips of encroaching brambles. We returned to the car.
Passing the Red Lion in Kontokali we saw Dave and Trish and stopped for a drink and a chance to discuss plans for lifting Summer Song with a crane so her engines could be changed and her bottom cleaned and anti-fouled – at convenient times for all involved. Good mannered dogs wandered around the tables.
“We’re having this one rehomed” said Dave, patting an especially engaging mutt “He’s been chipped, got his papers. He’s off to England.”
Lin chatted with Trish, I with Dave, who pointed me to two electric bicycles drawn up by the pub “They’re Dutch. Brilliant.”
The owners were friends at another table.
“They’ll be everywhere in another few years” I said “along with more and more clever inventions for harvesting sun and wind”
I warm to such speculation, easily roused to ire in my detestation of a century’s vassalage to fossil fuel “One day people will look back at our feckless insanity….” I check a familiar rant.
There’s a spit of land, the peninsular ending at Cape Tourka, that protects Gouvia Marina from the south winds.
“Let’s explore along there”
We drove down a small road off the start of a big bend on the dual carriageway into town, edging under and beside wet greenery through puddles beside a mix of orchards, and silent apartments, then parked on a gravel bay by the entry to a private drive between sturdy walls.  There were rough paths and tracks winding between olive trees opening to a thin beach of grass and – in the water – clumps of composted sea weed swaying listlessly. The view under olive brances to the mainland made this a lovely spot.

Others who must have shared this impression, some leaving their litter everywhere.
We drove a little further following a sign to Kontokali Beach, came to a small cul-de-sac, ending with sand.
“Do they ship this in?” wondered Lin
“I think there’s enough fetch here from the mainland to make sand. But you may be right”
There was a sort of sentry box roughly assembled from thin plywood, meant for people to change, and drop tissues. Over a low concrete barrier was the beach of a large box-built hotel, the uglier for the intrinsic beauty, of the surroundings it so effectively blighted, a blob of graffiti on willow pattern “Come friendly bombs…” I thought.
Figures seemed momentarily fixed in this unprofitable landscape – two distant red-uniformed hotel staff wandered desultorily among a field of metal and canvas loungers laid geometric beneath an orchard of reed parasols, one, a young woman, taking photos of the grey seaward landscape.
“You know” I said to Lin as we drove home through drizzle “this isn't just 'end of season'. It's more. In England we see the ruins of an industrial economy. Here we're wandering through the ruins of a tourist economy."
And truly this did remind me of the recovering wastelands of the Black Country where I enjoy cycling on canal towpaths and back roads through the stagnant remains of smokestack industry. Here, it’s the end of a different economy, or rather the messy mingling of a neglected pastoral economy with all the detritus of a consumer boom kicked off under the junta in the 1960s. This too is gradually becoming abandoned. Αυτό επίσης θα περάσει...

*My mistake. 'It is odd that an antipodean tree, the Eucalyptus, unknown before the voyages of Captain Cook, should look so beautiful and appropriate along many a Peloponnesian shore' from a footnote in chap 19, Patrick Leigh Fermor Mani: Travels in the Southern Peloponnese