A walk in the rain

It was getting late. I hadn't been out of the house. It was still raining by the time Oscar and I had walked to the Birmingham Mainline, dry and warm - he from running about, I wearing a good raincoat. We'd walked through the rich dripping foliage of Handsworth Park, across the Soho Road and down through wet Waverhill Park, to Handsworth New Road working our way via side roads to Black Patch Park, crossed and surrounded by tall trees, where, at the end of Murdock Road a procession of burst litter bags makes a trail along a narrow winding path between advancing greenery - railings and a blank wall on one side, Blackthorn then Buddleia between me and the West Coast railway line, which runs beside and slightly above the canal and its puddled towpath. 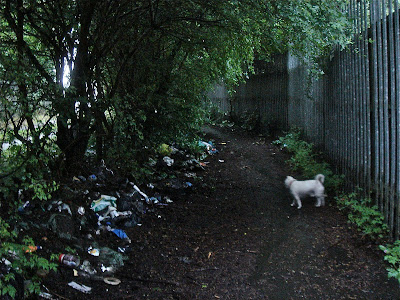 The Soho Loop turns off the Mainline. I followed it in gathering dusk, turning off down Clissold Street towards Hockley and along Icknield Street to the Hockley flyover... 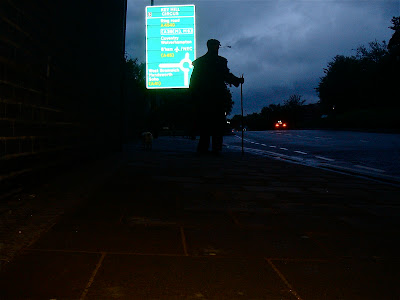 ...where there was a poster to do with Coke and the Olympic Games starting in 50 days... 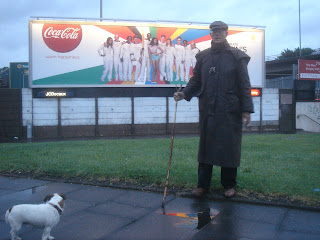 ...and so through the familiar tunnels, the art gallery below the flyover at the mouth of Hades... 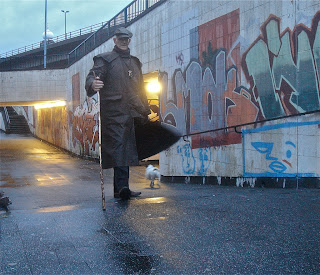 ...trudging up Soho Hill, beside flyposting and banks of trash, to Hamstead Road...
...looking forward to a cup of tea and supper. How comforted I am by the mess of a degenerating urban landscape, boarded public buildings... 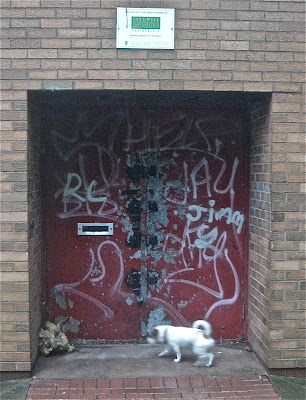 ,,,the rubbishy factory made doors and windows that have replaced the work of craftsmen, misguided ventures, attempts to make a neat and well constructed uniformity into something unique, with paint, plaster, facing bricks and ill-designed porches, deliberately temporary signage made by computer ("where would you find a sign writer?), alleys blocked by discarded furniture, ripped out gardens replaced with hard parking spaces, tiers of letter boxes stuffed with ageing junk-mail, litter strewn and swollen - in this weather sodden; as well as take-away boxes, sweet wrappers, cartons and pop bottles, grotesque discarded shapes - plastic, polystyrene and other synthetic material - enduring not easily recycled because inorganic. My stroll is a CSI strewn with evidence of deskilling, lost craft, disemployment, evaporation of care for place, a mercantile wasteland mired in trash. So much of this is not seen by people passing in cars or buses presented with grandiose posters directed at passing traffic. They go too fast for such detail. For over half my walk - about seven miles - we saw no-one, having the city to ourselves. On the canals - a pair of swans, ducks, geese, coot - with chicks - and moorhen. A rat dashed into swelling grass, chased by Oscar. I saw a heron high up heading towards Wolverhampton. How swiftly the world would recover from us.

...and it's not as if this dereliction is only in the city. Linda and I wander through Ano Korakiana on a wet day coming upon derelict museums of abandonment, emptied long before the present crisis, sagging roofs, corroding cook pots, shelves of bottles, torn fabric, wormed furniture, damp bedding, cheap broken things...
...and what's this rusting trucklet with cracked tyres, crammed with rubbish, sat in the village car park? 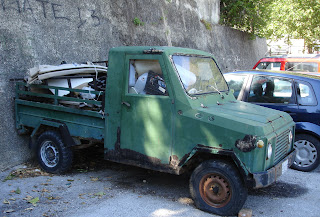 Or this void church kept dry with a good but temporary roof, its rood screen breached, cob-webbed and leaning pews, its congregation departed from a surrounding cluster of empty dwellings,? 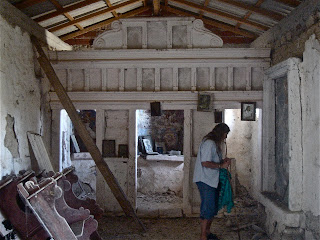 Such musty sights are part of the scenery of human settlements across the world, subject for art, tho' not the art of comment on specific historical events like homes lived in by refugees from Asia Minor in Prosfigika in Patras caught by Kleopatra Haritou Κλεοπάτρα Χαρίτου, at the Benaki in Athens. This is a diffuse decay, the history of a thousand thousand villages.
Eliot foresaw the essence of the 20th century world in The Wasteland nearly a century ago. His eloquence has run through my life...each man fixed his eyes before his feet...flowed up the hill and down King William Street to where Saint Mary Woolnoth kept the hours...
"Go" said my stepfather "and live somewhere that is already spoiled" Live in times already blighted.
So it's been for us. So I see things that lift my heart... 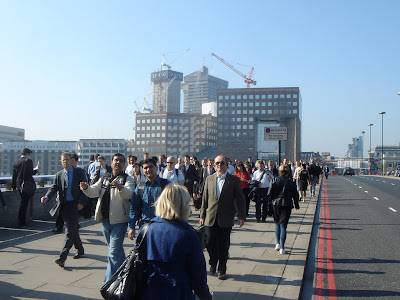 ...A crowd flowed over London Bridge without sighs short and infrequent, eyes not fixed before feet, but looking up, conducting music, chatting, jocund, musing, strolling above a sparkling river, and see this house with its new owners, clues that this is not a second home, built amid that same decaying part of the village, soundly re-roofed, re-windowed and doored, with wall emblems, a new vegetable garden and unfamiliar paint; a house whose owners we've seen working the last two years, carting heavy building material up a steep and - in winter - slippery path from Democracy Street...
*** ***
Crisis management in the EU Single Market - steps towards fiscal union...


On 6 June 2012, the Commission adopted a legislative proposal for bank recovery and resolution. The proposed framework sets out the necessary steps and powers to ensure that bank failures across the EU are managed in a way which avoids financial instability and minimises costs for taxpayers....

****** *****
Amy came round and stayed with us a while. We've a sturdy laundry basket made by Linda's mother's blind grandfather, employer of other blind people with a basket making shop in Walsall. We put Oliver, our grandson, in his great great grandfather's basket where he slept happily for a couple of hours 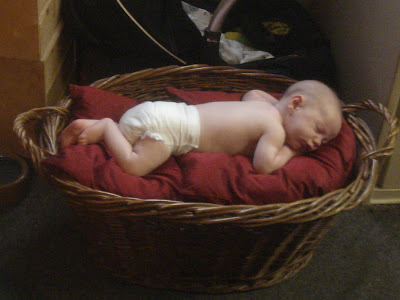 *** ***
Jim Potts on his blog Corfu Blues has again drawn my attention to examples of Greeks moving from the cities back to the villages where they grew up. Unlike my amateurish enjoyment of growing food on my Birmingham allotment, these are examples of initiatives driven by desperate times, and as I've already acknowledged a choice that is - at least for the time being - very far from the idyll of 'the good life'.


In Greece, a painful return to country roots. KONITSA. Thirteen years after abandoning rural Greece for a career in graphic design, Spiridoula Lakka finds herself in the last place she expected to end up -- watering a patch of lettuce and herbs in her sleepy village.

Jim comments on this piece:


I wish more young people would return to agriculture or to life in the countryside, and to repopulate the empty 'geriatric villages' in Greece. In fact, there's nothing to stop someone pursuing a career as a web-designer from a mountain village in Epirus, now that broadband is widely available.

And I have the latest report from my friend John Martin and his colleague Alistair Walker on their cycling odyssey across Canada trying to understand the secret of what makes a sustainable community, to which I've added my own summary of their current thoughts:


Uniqueness of every community. Voluntary. Passionate. Local appreciation of the wider world. Sense of purpose. Commitment to productive work for community - especially the young; to enabling dreams. Cooperation in pursuing a.shared future. Key issue: governance of small communities depends on a national spirit aligned with a local spirit. I’d like to make my notes even shorter to capture these gems. Some thoughts: what happens to the ‘outsider’ in a coherent community? Is there a spiritual dimension – for good or ill. e.g. role of religion, personal and collective? What about higher education and health care of the kind available in the big city. I recall accounts from other sustainable communities of video triage (telemedecine) at the local surgery with the option to fly a complex case to an urban hospital, and opportunities for hostel accommodation and care for commuting secondary school students who need to travel to a larger school or training centre enabling them to return at weekends and for longer holidays. What kind of local assemblies exist for local exploration of issues – village hall, community centre, cafe, club? How far is the local spirit blighted or enriched by the ever-present messages of the global media about exciting things happening in other places? I mused recently about Ano Korakiana in Corfu which, of course, John and Annie, know.