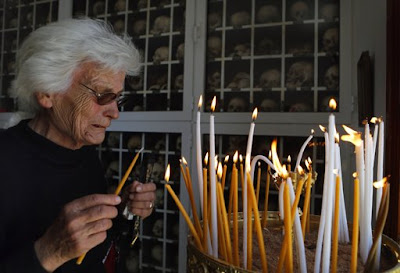 On the 68th anniversary of the Nazi massacre in Distomo, Panayiota Mario lights a candle inside a mausoleum containing the remains of victims, including her mother. 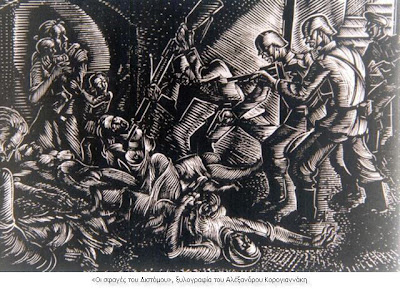 During the German occupation of Greece in WW2, when she was 6, soldiers of the 4th SS Polizei Panzergrenadier Division commanded by Fritz Lautenbach, burned the village and killed 218 people.

I harbour not an ounce of anti-German sentiment. In the Pantheon of all that is great in our species Germans have made a mighty contribution - in art, philosophy, governance, medicine and common civility. What happened to Germany in the first part of the 20th Century was that the most civilised of nations in circumstances, which will occupy scholars for ever, went mad, revealing, as if we didn't know it, that the worst lurks in the best, and the devil is in the detail. From casual ill-manners comes smoke from chimneys. From Job, the book  to which I cling, the most sinister description is written on the banality of evil....


...there was a day when the sons of God came to present themselves before the Lord, and Satan came also among them, and the Lord said unto Satan,
"Whence comest thou?
"Then Satan answered the Lord, and said,
"From going to and fro in the earth, and from walking up and down in it."

Back to the future: Athens News 14 Jun'12 - Reaction in Distomo to 44 in the village (same number as in Ano Korakiana) voting for Golden Dawn, Χρυσή Αυγή.
*** *** ***
Danny from across the way answered my request for advice on planting seeds. You'd think it'd be simple and in one way it is. You prepare a level tilth, cleared of weeds and larger pebbles then make a shallow straight groove, plant the seeds, cover over with soil,scatter some chicken dung fertiliser over the top and sprinkle lightly using the watering can with a rose, marking what's planted with the seed packet skewered on a short piece of bamboo topped with one of Robin's many empty vitamin pill bottles. I took me a good hour to prepare the soil to my satisfaction - observing Vanley's advice about fork plunging and knee bending - after I'd peeled back about seven feet of the black plastic I'd left spread over one side part of my allotment for the last eight months. I forked and raked, searching for couch grass roots, throwing them on to the plastic sheet to dry out and chucking lots of larger stones up against the fence at the back of the plot against which, now and then, they'd clang. Oscar in the meantime wandered in and out of the park using his favourite routes beneath the railings. Gradually my chosen piece of soil got to look like a worthy seed bed. 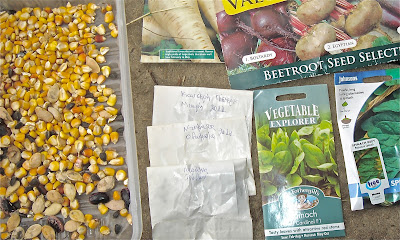 "Can you help?" I called to Danny
She came over with one of her four daughters. Did the soil look OK I wanted to know. Do I just make a groove with the end of my trowel? How long before I see any plants? Can I tell them from the weeds that are bound to sprout everywhere? She was full of reassuring advice.
"Watch out with parsnips. I had none the first year but when I sowed again six months later I had several really nice long one reaching deep. They're elusive."
I felt reassured, went ahead and planted two rows of parsnip seed.
Mindful of the importance of having space to stand I spread carpet tiles dividing the seeding area. One of Danny's daughter wandered over to chat and help plant one of two rows of spinach and the tomato seeds I'd been given free at the seed sharing meeting in Ano Korakiana in February.

With this, my first attempt at sowing seeds, since I tended a little plot at my prep school, I feel more confident about peeling back more of the black plastic sheet and planting more. Vanley says cut a slit in the sheet and plant through that, but I'd rather curl it gradually back, planting as I go, this time sowing more root vegetables and the rest of the seeds from Ano Korakiana, except for the corn. When I told Sebastianos, before we left for England, that I planned to plant the corn from the Co-op he said "It's too late in the year."
At home Lin's working into the dark tidying our garden, cutting away lots of greenery that I can bag up for composting. Later Denise came round with tales of neighbour's perfidy
"Arun came round the other day" she said "'Come and see my back garden' he says. So I go round and he takes me through and proudly shows me how he's taken out all the grass and flowerbeds and had it all bricked. 'Now the children will have somewhere to play' he says. What can you say?"

(Temporary inadequate translation) In Mourgades last night, at the western end of our village, a concentration of craftsman to beat a whole union of construction workers.  The Apergis' family garden was filled with guests, who in different ways have helped to rebuild the Peli house (if older) or Mouskouna (if modern). The menu included lamb on the spit, and mezes, with conversation around the long outdoor table, which lasted till long after midnight. All the same, problems and questions that concern us as a society don't get a final answer at these dinner parties. We hope this will be achieved shortly...
...and Aleko's translation: Dear Simon. Summer has arrived at last! We have great weather and high temperatures. Here is a translation. I must say your attempt is very good!...
Such a congregation of building craftsmen, like the one that took place last night at the top end of Mourgades, not even the union of builders would be able to achieve in our village. Even so, the garden of K & and St Apergis' family filled with guests who in their own way (their labour) contributed to the rebuilding of the Peli house (in the old traditional style) and the Mouskouna house (in the modern style). The menu included lamb on the spit and many mezes prepared by the family of the house.
Lengthy and serious conversations took place around the long outdoor table which lasted till long after midnight. Despite all this, the problems and questions concerning our society did not receive a final answer, not even after this dinner party. We hope this will be achieved very soon at some consequent function...
***** *****
So long as Germany opposes Barroso's idea of a banking union on the grounds that it more or less the same thing as the pooled sovereignty of fiscal union there seems small hope for the future of the present Eurozone. An email from my friend Tony:


Dear Simon, H and I were at my 50th reunion from Yale last weekend. Our class was treated to a special presentation by David Swensen who manages Yale's endowment and has been phenomenally successful.  He is the top endowment manager in the US. By one of  my classmates he was asked the question "Will the Euro survive?"

His response, "No"--without qualification. And that is what he, with Yale's $20 billion endowment fund, is betting on. Basically, he said Europe doesn't have the political and economic institutions for a unified currency. Or as I would say, "Europe is where the US was under the."  (Unfortunately our "Tea Party" activists would like to take us back to the Articles!) Just thought you might be interested in Swenson's opinion. Next Sunday's election in Greece will tell!  Can Merkel continue to prop up the German economy by selling German goods and having German banks lend to Spaniards who could never really afford to payoff the real estate loans?  Sounds very much like predatory sub-prime lending here in the  US 3 years ago. Best wishes and sails trimmed to you and Lin. Tony