"They will live with what they choose"

On the 28 May, just before we left Greece I said goodbye to Sally


"There'll have been some water under the bridge by the last week of August?" I said
"Greeks will decide" she said in her matter-of-fact way "If they vote for SIRIZA they mean to go back to the drachma and take the consequences; if for New Democracy they will have chosen more austerity. They will live with what they choose." 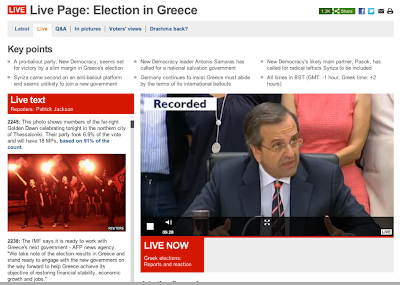 So it look as if a majority have rejected the Tsipras gamble and voted for continued austerity. This will please other European leaders. Despite wobbling, the famous first domino hasn't fallen - so there's breathing space for Spain and those just behind her. There will be the opportunity - if the current mood continues - for leaders at the next EU summit on 28th and 29th June, to work directly and indirectly on banking union and pooled sovereignty and anything else to improve the stability of the Eurozone. 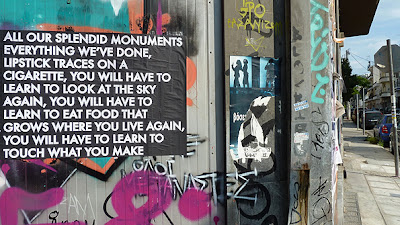 “Here we are in the same place…” meeting again after roughly a month, for a second attempt at resolving (?) the political economic and social problems of the country via Parliamentary elections, once more in a short interval in a summer charged with intense political activity unlike any of the previous almost carefree times...… wondering if solutions lie with the 'old or the new'; with 'fear or hope'; with 'one or the other', amid every puzzling argument, without any confident sense of the future. Outside Keffalonitis' Kafenion, people will gather from early morning debating and conjecturing the outcome of the election and the prospects of forming a government. Of course, because of the heat, many will prefer to pass their Sunday morning at the beach…meeting again in the evening to learn not only what's happened but the reality with which we will live..."

...and a storyin the New York Times from another village Touthoa Τουθοα in Arcadia, Αρκαδία - I saw it once long ago...


a quiet hamlet, which sprang to life on Election Day as descendants of the 30 or so grandparents and parents still living here gathered to participate in the latest expression of democracy that they hoped would deliver the country from its troubles....Far from the grim atmosphere gripping Athens, Touthoa teems with silver-tipped olive groves, sun-kissed vegetable gardens and flocks of sheep, living testaments to the centuries-long natural wealth of this resilient nation....

Yanis Varoufakis (2.30 on the clip below)"The negotiating card is not either we have a deal that is workable or we get out of the euro. No no. It’s very very simple....Don’t threaten the Europeans with an exodus. Simply say guys I’m not going to take the next instalment. That’s it...and sit down"

Polling day musing. If Greeks vote for continued austerity Samaras style, the bail-out which follows this August involves paying it all back to creditors, rather than into what remains of the declining Greek economy. Threatening to leave the euro is crazy...well think about it. This is like saying "If you don't do your homework, my daughter, I will stop breathing until I die."
If as a result of a Greek rejection of the bailout planned for mid-Aug 2012, Greece is thrown out of the Eurozone, then the Eurozone goes down too. Yes? No? This is the Tsipras gamble he's shared pre-election. This is like 'prisoners' dilemma' but with only the lose-lose and win-win options. If Europe and Greece can co-operate in some way not yet explored there might be a win-win, or the start of a win-win solution to what has for a good while looked like a seriously lose-lose one. Greek economist Yanis Varoufakis seems to be saying that the win-lose, or lose-win options of the dilemma aren't available. Is he just playing Ulysses, the crafty? If Greece votes for continued austerity she loses, but no-one else wins - indeed the whole world may lose. If she votes against austerity she also doesn't win, but nor does anyone else. This is one of SIRIZA's advisors explaining himself. PSI, by the way refers to the theory of  Private Sector Involvement in the problem. 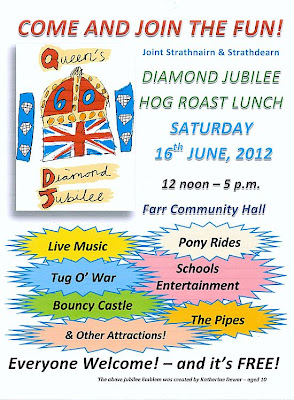 Yesterday after a walk with Lulu, I drove my mother down to the Farr Community Hall on the edge of Inverarnie where all ages were having a good go at celebrating the Diamond Jubilee, she greeted friends, some she'd not seen for ages, and had look at the various images of the Queen she, with help from Richard, had chosen for a display inside the hall


On another wall was a projection of the 1953 Coronation procession. I watched it in black and white between helping with a village fête while my mum and Jack sat soaking and chill on a stand in the Mall "I've never been so cold" said Mum. The weather now wasn't different from the weather sixty years ago, but then I expect this in the Highlands along with the midges that keep tourists at bay.

[Back to the future - 9 July'12: Story in the Herald Scotland about the advancement in Scots' support for keeping the Union - it resonates with Greek popular support for staying in the Eurozone]
*** ***
Circular from Linda to other members of the Handsworth Helping Hands 'team':


Hi All. I've completed the accounts from when we took over the finances. Current bank balance is £14,539.76, which tallies with my balance brought forward on sheet 4. The 14th June cheques are still to go through. I've asked for places for Denise and I at the Midland Heart 'Meet the Buyer' open day next Friday. If anyone else has a burning desire to go, please let me know asap.
I suggested next Thursday or Friday for the Church Vale cleanup. Friday is now out, as there won't be enough volunteers if we get the Midland Heart places.  Do we want to do the Church Vale work on Thursday 21st June or would it be better to leave it until the week after? Please let me know what you want to do asap. Lin

***** ****** ****
From last December's blog - Marylebone Station pub: I maintain vigorous hope for a revival of sustainable communities - clusters of villages and smaller provincial towns; a global trend to be observed if sought in India, Australia, Canada and much of Europe including Greece.  To survive and even thrive in villages it is neither possible nor feasible to revert to the past whose grinding conditions so many sought to escape; nor is it possible in some straightforward way to revert the attitudes and values of a globally urbanised world to villages. The ideas, techniques and values essential for survival and success in these small linked communities have not yet been assimilated or in some cases even invented. The new ideas and practices exist but only in certain places unique to particular critical clusters of people. Every small community is different and unique and there is so simple generic set of guidelines on how to make villages or clusters of villages work for their inhabitants. The ideas are out there - hardly realised, evolving, their originality, difficult, even impossible, to distinguish amid the suffocating noise of present crises  and current understandings of the world. There are communities dotted around the world which seem to be working (some we know, some we don't and wouldn't know what we were seeing of they were evolving in front of us because of our urban globalised preconceptions). I very much doubt if the centralised governments of large modern states are capable of helping such new ways of living too evolve, and certainly the past for all our nostalgia about it has little to teach us in this matter (notwithstanding sources of wisdom in our species that have always been present in, and at, different and unpredictable places and times. The work of Elinor Ostrom (Nobel Prize 2009) is helpful but there are many many other sources of inspiration. We cannot look to Athens. London, Berlin or Washington, nor Delhi, Beijing or Rio for answers and inspiration. Though it may be that men and women who will support and can lead, and are leading, these other ways of living, will come from the heart of great cities - not escaping, not refugees but pioneers .

Excuse metonymy, but pornography is getting a bit above itself. In the sensible opinion of Mrs Pat, it's starting to "frighten the horses." It does this, now and then, donning a familiar variety of transparent disguises – the ubiquity of the sexual drive, the harm of repression, freedom of speech, fear of being thought prudish, liberation. Blah. Such altruism! Such enrichment for broadcasters and publishers pitching their tents beneath the current New York Times fiction list…an inexperienced college student falls in love with a tortured man who has particular sexual tastes…"ooh er missus"…the first book in a trilogy…"Phwoah" etc.  This is impudent. In the kingdom of the flesh a degree of hierarchy works rather well, not censorship, suppression, nor 'decent reticence', but a recognition of place...and, just possibly, love

...All day, the same our postures were,
And wee said nothing, all the day...