We seem unable to avoid bickering. I suspect I am being pointed somewhere – on villages? communities? getting old?
“When I was very young” I said to Lin “I thought the default condition was tidiness."
People I hardly noticed cleared up after me and I didn’t even notice – having my nappies changed - I suppose I must have had them - my washing done, my food prepared. Later it was housework. I knew how to muck out a stable and clean tack – from enthusiasm for a pony – long before compunction to make a bed or clean up a room. The first space I learned to keep tidy – immaculately so - was the inside of a sailing boat – from enthusiasm for not scraping a mélange of glass, broken eggs, cutlery and clothing from the cabin sole the first time we hit a sea. I didn’t know houses needed maintaining until I was thirty. And I didn’t think about whether a community was sustainable – let alone worry about whether a village or a street worked until late middle age – 50 or older? apart
Now I’m seventy I recognise the default condition is mess, collapse, corrosion – a relentless conspiracy of moth and rust to corrupt. Without work- constant energy - things fall. I’m acquainted with the dust to which I shall return. Lin sees entropy all about – paintwork fades and blackens with smoke, walls that mould and bleed efflorescence, roof tiles that loosen and crack, invasive weeds, woodworm and termites, dry rot, wet rot, leaking joints, speckles of oxide lifting paint, bleaching wood shrinking in the sun. Something Graham Hurley wrote he’d learned researching his brilliant procedurals ‘that so-called “vol crime” would never go away.  It was like the weather, or gravity.’
Lin thinks a house can be made good; gets morose when I behave and sound unconvinced, but the Naz knew “The poor you have with you always”. Graham puts it ‘Pompey scrotes would never give up.  Never.  You could depend on it.’
Lin still seeks to drive up our Performance Indicators, but as the Bible’s first atheist wrote – to get past a censor – ‘Canst thou draw out Leviathan with a hook?’ Greeks invented philosophies that engaged with the despair that can attend housework, stoicism to confront the inevitability of unending maintenance, irony about its ultimate futility. Fatalism - μοιρολατρίαin - knowing dust will never give up.

Villages? What makes them work. Why the question even? Because cities are imbalanced in their relation to their surroundings. They parasite on the land, forcing people off it into their slums and sprawling suburbs. The world’s trend is towards vaster cities. Towards citification. My stepfather would speak of the coming city of England, where on some busy weekends you'd have to book your visit to the countryside as otherwise it would be 'full'. In the advanced economies the countryside has become a metro recreation ground – commodified views, picturesque with footpaths that circuit back to carparks off big roads, a place for second homes and transit hubs for big box distribution and factory farms. In England now hardly 4% of those who live in the countryside make their living there. The urban bourgeois yearn to live there and buy second homes in villages. The poorer like a spin in the countryside. What’s left of villagers, especially youth, find nothing to do there and look to the city for a life, for education, training, for health and for the possibility of work.
Is this an approximate diagnosis of a problem? How could the picture be enriched, its crude brushstrokes made more precise while maintaining the general impression? If the countryside is so congenial to townspeople why do some people crave Dubai? Now there’s my idea of a netherworld – concrete Mordor-on-Sea. But lots of people love it. There’s no crime to see, the apartments are spotless and spiderless, the pools blue and the domestic help upon which this sanitized limbo depends pliable, almost invisible – unless like us, you take a bendy bus from the mighty airport before first light to see Satwa Bus Station... 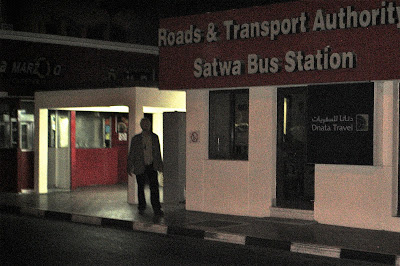 ...Give me a bicycle and a map and I’d end up liking the place – don’t I come from Birmingham? – pedaling round the underbelly, trunkless lots, amputated pipes of various gauges sticking up from nowhere, premature Ozymandias. Look upon Dubai and despair.
*** ***
What if the earth refused credit? "For your seeds I loan you nutrients and space." It’s not like that among men. The first question isn’t about the earth but about human property. Who lets you use this plot of land on which to grow your crops? Whose army protects it from invasion? Whose local government decides this land is for growing food rather than providing space for building, road, rail, runway or car park? What laws protect your rights to use this land, enjoy its usufruct? Who contests its ownership? What if the sun demanded a down payment, or the weather allowed you a slate? It’s not like that among us.
When does a child learn about ancient lights? About the law as it relates to casting shadow? What a row is in preparation about selling the sun, and rights over its harvest. Come come, of course the sun is free, as was coal, oil and wood. Where the law and money enter is in the knowledge that made – makes - them into easily available energy. The cost of solar energy will contain profit to recover the investment in education and technology that allows us to focus the sun, as through a magnifying glass we used it to make a flame or to signal with a heliograph. Without human inventiveness the sun’s heat, for all the divinity men ascribe its source for the myriad use of sunlight, is hardly more useful than water vapour from a boiling kettle. Fruit dropped on men’s head for millennia. Isaac Newton struck by an apple mid-muse thought gravity. Steam bubbled too, even powered the playful aeolipile, but James Watt ignored the vapour streaming from the kettle spout, mused on the unharnessed power in the invisible gas heaving at its lid. For the sun to power a train or a hand-drill, to fry an egg in winter or deliver a hot shower in Reykjavik, someone’s going to want to be paid. It's for the intensification we’ll be taxed. I’m not sure William Blake decrying the sequestration by men of what should be God’s gift understood this.
*** ***
So what can be done?

The Leaders of SYRIZA, PASOK and ND have separately and successively tried and failed to form a government; some rainbow coalition that would support continued austerity. Lock in, or rather lock-out. We watch and pray and paddle and I feel an almost constant nagging worry in the pit of my stomach.

An English-language summary of the transcripts of the meetings held on 13/05/2012 between the President of the Republic, Karolos Papoulias, and the leaders of all the political parties that were elected to parliament following the 06/05/2012 elections, in an attempt to form a coalition government.