The bakery in Ano Korakiana

Monday started clear but became an overcast day - warm and close. I’m pretty sure our neighbours were up all night. I woke at five to hear their TV softly relaying election commentary – rather less dramatic with proportional representation, as you don’t get to hear the succession of personal mini-triumphs and defeats as our British first-past-the-post results come in with the announcement of the count by the local government returning officer.
I knocked on their door and invited myself in, enjoyed the coffee and sweet things that Vasiliki makes and watched the TV as Lefteri and Adoni (just back, with Effie, from caring for elderly parents near Thessaloniki) commented on a streaming sub-title banner reporting performance around the country of ND New Democracy, PASOK Panhellenic Socialist Movement, KKE Communist Party of Greece, LAOS Popular Orthodox Rally, SYRIZA Coalition of the Radical Left, ANEL Independent Greeks, DIMAR Democratic Left, KOISY Social Agreement, DISY Democratic Alliance and about 21 other parties….(see Huffington Post for instance - showing ND coming first but Samaras unlikely to be able to form a government with PASOK or SYRIZA - next most successful in the poll....and this from Nick Malkoutzis:


We expected the two parties that have ruled Greece since 1974 to go through a staggered collapse, possibly over the course of two or three elections, but we are already surveying the debris today: The wrecking ball came in one fell swoop and left New Democracy and PASOK in ruins from which they will find it difficult to rebuild themselves.

At sunrise I went down the path below our garden to the lower road to complete an account of the bakery on National Opposition Street - Οδός Εθνικής Αντίστασης - with permission from Pepe via Stamatis at the shop.
Lin and I are devilling about small things, like putting too much lemon in the loo ("It'll mess up the soak away" "No it won't" "Yes it will" "OK you do what you like") and other banalities that amplify into ridiculous significance – thus are cattle distempered by insects.
A kind villager, Mariki I think, brought round some hanging geraniums and Vasiliki has given us a flowerpot of large daisies. Cycling back from the bakery, the carpenter I see working in his garage fronting Democracy Street, called me over to see the small inlaid round table he’d nearly finished; a finely turned central support and an exquisitely crafted table surface of orange, mahogany and – another greenish wood whose name I couldn’t catch – an intricate geometry of inlays awaiting finish and polish, over a circular frame in which he’d cut a hole for a small bow fronted drawer.
Once home I edited and compressed my film down to just under three minutes, and was about to show it by way of placation to Lin when I heard someone on the path outside our veranda say “Yasoo”. There was silence and then the greeting was repeated and peering round the wall appeared Richard and Emma.
“Bloo-dy hell” I exclaimed in delight. Lin was instant beaming; sun come out of a cloud. Soon we were chatting on the balcony, their hand baggage in the small bedroom already. They’d caught a flight deal from Birmingham for a week’s stay in Corfu, and driven on a day-hire from the airport. 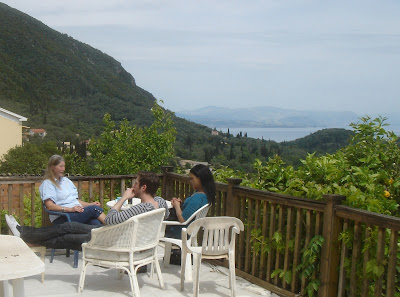 Our son likes giving such surprises. We love getting them. Later Lin looked at the film of the bakery.
"It's good"

*** ***
See Jim Potts' Corfu Blues for comments and links on Corfu and overall Greek election results; and this is how a 65% turnout voted - with just 14 spoiled ballots - in Ano Korakiana; under three quarters of the village's 1252 permitted voters. As Thanassis points out on the village website, these figures like the national result show how difficult it will be to form a national government. We have 67 neighbours voting for far-right parties - Golden Dawn and LAOS, (At least the Greens got more votes - 41- than LAOS), 147 - the highest vote in the village for one party - voted for the left wing alliance SYRIZA who are against EU-IMF austerity programme, then 114 voted for PASOK the outgoing party, 111 for KKE, the communist party of Greece, and 87 for New Democracy ND, the party who received the most votes at national level.


The tragedy of Greece's struggle to survive will affect us all: The general election has been a referendum on economic situation and its consequences.
I am sometimes asked why Irish readers should be concerned over the fate of the Greeks. Quite apart from the similarities in the depression of the two countries, Peter Murtagh’s recent reports from Athens in this paper vividly indicated the extent of the collapse of Greek society on both macro and micro levels. This has repercussions for Ireland. The reasons for needing to know about Greece are threefold.
Firstly, the fact that we are all within the EU – at least for the present – means we do not ask for whom the bell tolls: it tolls for us. Secondly, we need to appreciate that a country considered principally as a two-dimensional holiday destination is actually populated by real people with real lives to lead outside the holiday season: we have severe winters here! Thirdly, Greece gave us concepts such as “democracy”, “economy”, “philosophy”, “aesthetics”, “semantics”, and, admittedly, “plutocracy” and “kleptocracy” – in fact, about one-third of our vocabulary. That it should lose its sovereignty, its status, even its attraction as a holiday magnet, is a matter for all of us to regret and to recognise we can do nothing about it. And – here is the real tragedy – neither can the Greeks.....