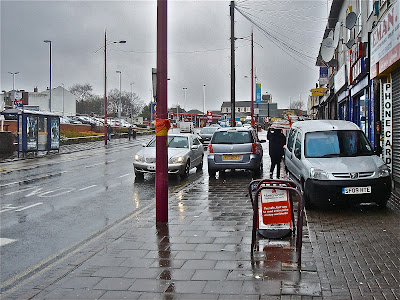 Up the Soho Road for various errands. The weather's wet, windy and chilly. I think of Giles. No cartoonist could better evoke a dreich British day. Spring has receded, but rain is welcome on the allotment...

...where I've planted four rows of potatoes, five fruit trees, a row of cabbages, a rhubarb, and runner beans, and five rows of onions... 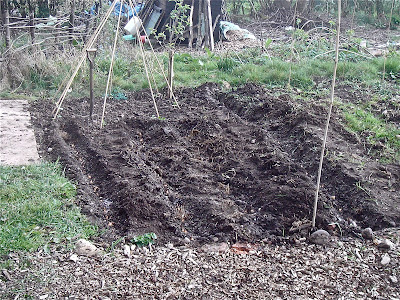 The soil still puzzles me. Should it be a perfect homogenous medium like branded compost in plastic bags from garden centres? It's far from that, far more interesting, far stranger.  I keep picking out larger stones, couch roots, miscellaneous human-made debris like bricks, glass, bits of plastic and metal fragments and other weeds. I lay the small onions about four inches apart roots down and water the trench after sprinkling them with bone meal and chicken manure. Have I planted too deep or too shallow? Is it  enough? Too much? I rake heaped soil back over the trenches picking out more large pebbles and couch roots. I'm only slightly confident these plants will survive and grow. The trees - yes. The other crops I've yet to see. All the time the soil's becoming easier to work, more couch grass removed and larger stones set aside. Everything tells me you can't really leave an allotment to itself. If it's not me someone else must work it daily.
What else? I've started composting in a set of heavy duty builder's bags, made two more slab paths, arranged with my neighbour Gill to place her bees on the plot next month, and of course there's the shed with its veranda - my base - inside whose door I've just noticed a wasp nest. Going in and out of the shed is going to present a lot of opportunities for us being seen as a threat, so despite all the benefits of wasps as insect predators, pollinators and recyclers, I'm going to need to move this nest to a more mutually satisfactory place.
How the wasp nest was removed without killing its sole inhabitant.
*** *** ***
I had a go at giving advice to someone who sent me a first chapter of the book on which they're working. I am of course addressing myself:

***** *****
At Plymouth on Tuesday John Rose and I will be collecting the Jack Hargreaves collection from South West Film and Television Archive (SWFTA) and bringing it back to temperature controlled storage in central Birmingham, minus the tapes of Old Country which will go with David Knowles to his home. David will meet us at the archive on Tuesday to help with the loading and, most of all, cast his experienced eye over the contents of the collection with a view to helping with the work we are planning to make this material accessible. The Facebook page for Out of Town is getting busier:


I was down at the Rag Market yesterday. Had one of my favourite snacks from the stall just inside the covered part, a marfona, or is it an estima, baked spud with plenty of butter and a cup of tea. People recognised and greeted Oscar sat in the basket on my Brompton just outside the big glass doors. Roaming I bought a 1970s Ladybird Book on Transport through the ages, held together with sellotape, remaindered from St Chad's Roman Catholic Primary School... 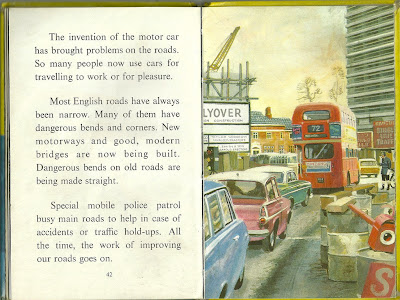 ...a book published in 1970 just after the landing on the Moon when people were intoxicated by roads and cars. Bicycles, once so liberating, had become mere toys or things some dads were  still forced to ride because they had no 'better' choice. My photo (top) of Soho Road, taken only the day before yesterday, exemplifies that bleak 1970s vision of 'improvement', but how things have changed in 40 years of long campaigning against the ravages of autodependency. I wrote in 2007:


I have just seen my car driven away by a friend who's got it for free. I've been 'deciding' for 5 years - maybe longer. But the final decision to be rid of it came a week ago, since when it's sat in our drive, insurance cancelled. It helped that the cost of repairing its transmission was assessed as more than its worth. I have not been without a car since the 1960s. This evening is a moment long anticipated, regularly postponed. My family seem to have had cars since they were toys. I recovered an old photo of Barbara Maine, my maternal grandmother Bar, in her Peugeot smoking a cheroot. I recall having some of my happiest childhood times in cars, with my family. What I best remember (something written about and filmed at the time) is the accessibility to places all over Britain we got from having a car in the 1950s. I realise we drove - 50 years ago - on roads that most people now see in absurd advertisements - filmed on locations in Croatia or Albania. My mother and step-father were writers and journalists through the late 1940s and '50s. Cars were part of their salaries. We had the means to drive. We would arrive at places where there would be no cars for miles - or very few. We could park next to beaches, cliff tops, and high ridges with mighty views (see what I mean about advertising?). We reconnoitred long, lightly-paved rural lanes ending in cul-de-sacs where, after a word with a the farmer, we set up tent and fished in clear trout streams. We ate our catch fried in butter. I was often very happy - innocent of being in a vanguard of social change. My step-father remarked once, when I was going on once about the 'beauties of the countryside' (I was a literary youth) that this sort of thing wouldn't last. 'We're doing things the very rich could do... Soon everyone will be doing it! We're part of the rot.' ...."

*** ***
I have so many good and interesting things on my British plate. Even so I long to be in Greece, to touch her ground and see our friends.