I've bought and installed a new element and thermostat for our hot water boiler. The colours of wires for electrical connection shift over time. Wasn’t it once black for negative, red for positive – still is on car batteries – and green for earth? Now I have three wires on my power mains – one a blend of yellow and green which I know is earth, since that is how earth, if not covered by cloud, looks from the upper atmosphere, with the other two brown and blue, which I’m pretty sure are positive and negative. But I have to connect these three to our boiler which needs a new element. Earth is a simple connection on the rim of the element plate but brown and blue must connect to a red and blue terminal on the thermostat housing.

“Just to be quite sure about the connections, Yianni. It’s blue to blue and brown to red? Yes?”
I pointed to the points of connection on the thermostat he’d sold me.
“No”
“Surely it’s brown to red and blue to blue?”
“Yes. By all means make this connection. You will blow up your boiler and burn down your house”
“But...?”
“Look” He ran his figure over the circuit diagram I hadn’t noticed, in relief on the plastic housing.
“See the numbers?" They were also there “Brown goes to one and blue to four”
I wrote it down, muttering “brown to one, blue to four”
“Like that?”
“Yes of course”
“Thanks Yianni. Bye” 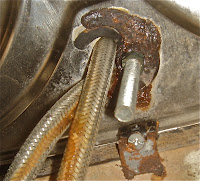 Other jobs - fitting new taps to the washbasin, tightening the mixer tap in the kitchen. Flash photos show the fixing so’s we can select the right bottle spanner. 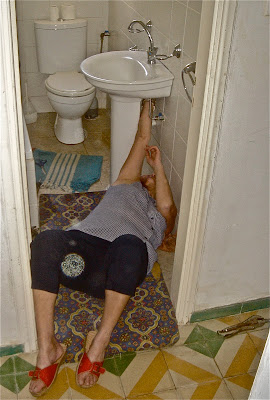 Getting under, lying on a foam mattress, applying penetrating oil; waiting. Water’s turned off but pipes in their nature drip. Fiddling, fitting, trying and finally turning reluctant nuts on rusted threads. We’ve got plumber’s wadding thread and the right wrenches. When the water’s on again with no leaks we get pleasure. Work that once we wouldn’t have attempted - not me at any rate - will seem easier next time. It must be as good when someone learning to read late in life can get through the first pages of a Ladybird.
...My ignorance of this or rather my willingness to own up to it, apart from my interest in avoiding a minor disaster, is a sign of C.P.Snow’s two cultures. It ought to be a shameful to me to reveal such illiteracy about the simplest electrical wiring as for someone else who in secret embarrassment says they’ve lost their spectacles when faced with being shown something to read. Two others including Linda had already made the brown-red, blue-blue connection clear, but they'd not even seen that circuit diagram on the thermostat. Would that such shame could attach to denying the chronology of evolution and the wondrous antiquity of the universe.
Just to remind myself again. If there was a history book whose pages were of rice paper and one page described a century, the length of the close packed bookshelf needed to hold the history of our universe – ο κόσμος μας - would be ten miles long – possibly ten and three quarters if you add in a bit of statistical uncertainty and varying types of paper - the distance from Ano Korakiana to St Spyridon’s Church in the city travelling on the Sidari-Paleo road.
*** ***
A friend finally discerned the ageing obscure sign with the name of the road that runs through the village almost parallel with Democracy Street. Οδός Εθνικής Αντίστασης, National Opposition Street...
Why such names? Until I point out these street signs and ask about them, nobody but the village historian Kostas Apergis, who spoke sketchily to me about this some years ago, even knows about them, let alone uses them. One road – ours -  is the one that leads to Sokraki and the other is the road to Ayios Markos. The naming of village streets was suggested by the government of the Junta in the late 60s and chosen by just a few senior people in the village. In those days ‘suggested’ meant ‘prescribe’ and response was mandatory. What was to be done. I don’t know and unless I live here longer it is most unlikely anyone will tell me the exact story. Perhaps wisely. The Junta - ο καθεστώς των Συνταγματαρχών - described themselves as a democracy, so although they would have preferred the street to be names something like April 21 Street – the day of their coup in 1967, much celebrated on stamps and posters – they could not too obviously object to the name Democracy Street, especially as it so clearly ran above the other street now called National Opposition Street.
**** ****
Mike Tye, who now shares our allotment, sends me snippets of news about progress on plot 14:


As the wind rattles down the chimney and I watch the tree branches reach to the ground I fear the lashing rain will not encourage your spuds or anything else. Reports of Asparagus heading back down again are not exaggerated, maybe a better May blossom time, if its not all swept away today! MT  ps I will not be heading to plot today I fear

A photo posted on Facebook by a cyberfriend - Lizzie Alderdice

*** ***
The Out of Town page of Facebook is turning out to be a useful portal for sharing ideas on the future of my stepfather's films and tapes - the collection John Rose and I bought back from Plymouth so recently to a secure store in Birmingham. David Knowles,one of Jack's colleagues and director of his programme Old Country on Channel 4 in the mid-80s, has set about getting hold of the technology needed to explore and eventually digitise the medley of betatapes, sound tapes and 16mm film now spread among about thirty big cardboard boxes. He's got a Betaplayer and now a reel-to-reel tape player. We can't hope to buy a Steenbeck machine - the device that could be used to view the hours of silent 16mm film, match it to sound tape and digitise it. They cost thousands. We will need to hire time on someone else's. The re-issued DVD set of Out of Town are now selling again and I can hope for some royalties to help pay for storing and working on the collection. The same applies to the recently recovered 34 original Southern Television broadcasts of Out of Town traced via Kaleidoscope, but reclaimed by Endemol. The legal issue re rights remains ambiguous - a circumstance that will inhibit successful grant applications. So I'm working on that...
Posted by sibadd