I'm back in Birmingham with my step-father's films and tapes in the back of our transit van ready to be taken on to safe storage in the city centre. John, my neighbour in Handsworth, and I left for Plymouth at eight this morning. At Royal William Yard by the sea at Plymouth we met up with Jenny and David Knowles and immediately began trolleying the films and tapes of the Jack Hargreaves Collection from their long resting place on shelves in the South West Film and Television Archive (SWFTA) out of the building and into the transit van for the 200 mile journey home. David picked out boxes bearing his writing that he'd not seen for over twenty years - tapes from  Old Country, the series he did with Jack for Channel 4, successor to Out of Town. These he'll check over at his home in Hythe.

"The past is passing away in the English countryside at a rapidly accelerating speed. The change is amazing" said Jack towards the end of his life. The films he talks about in this clip were stored on shelves in the shed next to his home in Dorset. They are silent 16mm films, some going back to the early 1970s, all shot by his long-term cameraman, Stan Bréhaut. They were transferred from that shed at Raven Cottage after Jack's death in 1994 by his friend Nick Wright, who stored them in his own house for nearly a decade. When Nick moved home and no longer had room for the collection, he transferred the films to the archive at Plymouth. We collected them from there today - their cans somewhat rusty after so many years.


*** ***
Friday 13th:  Richard Pine has just circulated his latest piece on Greece in the Irish Times - 'Greece undone by toxic blend of clientelism and corruption' - anticipating the Greek general election in early May, comparing the collusion of politicians and populace in the corruption of public life, in both Greece and Ireland - a reminder that "my friends, we all ate at the same table" "Τα φαγαμε ολοι Μαζί"


...In the build-up to the general election to be held in early May, the two major parties, Pasok and New Democracy, have fragmented, with eight or nine minor parties in the field, each of which (except the Communist Party) has a chance of featuring in what will almost certainly be a coalition government.
Defections from Pasok have led to the creation of Democratic Left and Social Pact, while New Democracy’s defectors have set up Democratic Alliance and Independent Greeks. Laos (the right-wing Popular Orthodox Rally) and Syriza (Radical Left Coalition) and the communists have largely been immune from this fragmentation. To these must be added National Unity League, founded last year by former army officers, and Golden Dawn, a group of self-professed anti-Semitic and xenophobic fascists.
Parallel to this has been the growth of illegal organisations, following the dispersal of 17 November, the terrorist group that dictated the rhythm of Greek political violence from 1975 until the arrest of its leaders in 2002. The successor was Revolutionary Struggle, which emerged in 2003, followed by the Sect of Revolutionaries (a splinter from the former) that assassinated a journalist in 2010.
Others are Urban Guerrilla War, Lambros Fountas Guerrilla Group, Revolutionary National Socialist Front and the Terrorist Guerrilla Group. By far the most active in recent times has been the Conspiracy of the Cells of Fire, which in 2010 sent a spate of letter bombs to foreign embassies and is suspected of the bomb that killed an aide to the law enforcement minister.
Leaving terrorism aside, Greece and Ireland have much in common. Fintan O’Toole’s assessment of the Mahon tribunal report (March 24th) rings horribly true to Greek ears. He portrays 'the great silence' of a complacent electorate* who allowed themselves to be fooled by politicians into 'passive collusion', while 'corruption affected every level' and 'undermined the rule of law'. Substitute Greek names for Irish, and you have the situation here: Greeks in general enjoy the same tolerance of bribery and clientelism.
Media commentators here continually refer to similar levels of corruption in public life, and the Greek people’s capacity to condone it....

*Fintan O’Toole: The really tough thing about the Mahon report is that it strongly implies that few of us were really that naïve. It suggests that the issue with corruption in Ireland is not innocence but wilful ignorance, not just wrongdoing but passive collusion. What happened was not belief in Bertie Ahern’s lies but something more subtle and more characteristic of Irish culture: a suspension of disbelief.
*** ***
Good Friday in Ano Korakiana... 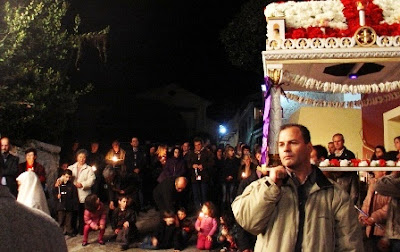 ...a rainy day of mourning; a re-enactment of the crucifixion across Greece. A picture of Christ is on the Epitaphio, its edges dressed with carnations. From the church, boys carry lowered standards, followed by villagers, the choir behind, along Democracy Street, everyone carrying candles. When the funeral procession is back in the church, people take carnations home.
...and a taste of what we're missing arriving late - The Liston in Corfu on Easter Saturday this time last year. Είναι όλοι τους εξαιρετικοί 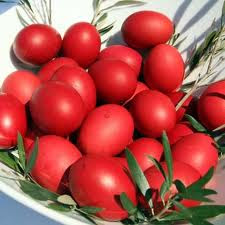