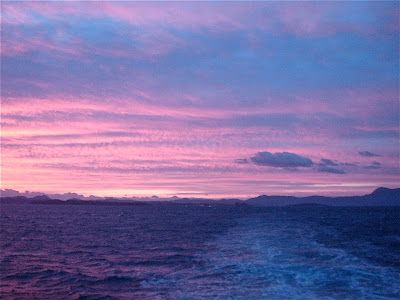 Mark drove me to the port. I left Corfu on Eleni to catch the Superfast to Bari from Igoumenitsa. In the main terminal building's foyer there's a maquette of how the port might look once it's full re-development is completed - every millimetre of the conception reflects the absence of a thought for someone who might wish to negotiate this space on foot. It is entirely, where not roofed, designed for motorised traffic, its patron referred to in a plaque beneath... 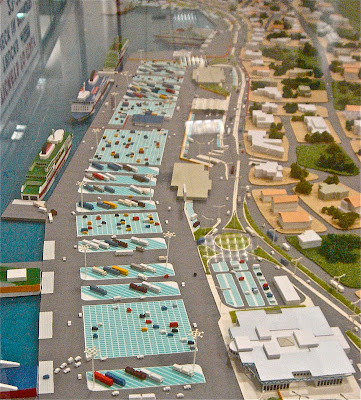 'INSTITUTION OF CONCRETISATION OF ORGANISM OF PORT OF IGOUMENITSA S.A.'
*** ***
It was cold waiting at the edge of the pier for the big ferry, the wind rising from the north. Through the early hours of Wednesday the Adriatic stirred up a winter northerly - not an ounce of Spring in it - through which this behemoth ploughs regardless. I get to sleep across three reclining sofa seats - offered as compensation for late departure. At breakfast the north wind's risen, stirring a sparkling sea, grey smudges on the horizon now and then flashing a bright slab hull through the haze show other ships heading south and north to from the Straits of Otranto.  Two bread slices, butter, apricot jam and coffee.... 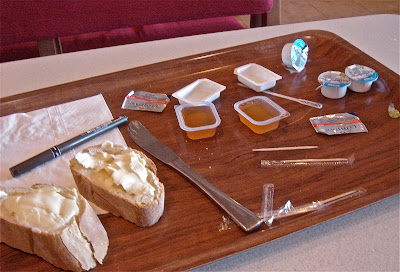 ... My futile attempts to remove the tautly stretched covers on my jam capsules with a toothpick, then a ballpoint, are kindly interrupted by a waiter with fingers like small spades who has them open in minutes
"Philoxenia" I say
"Parakalo" he bows graciously.

Now and then, over the constant rumble of the turbines, a bump felt more than heard like a missed heart beat and a distant boom on the hollow drum of the hold as tho' something had reached up to rap the hull requesting quiet. The gale on the sea - white caps to the horizon, spume rocking in the rippled interval between rollers, seen through the square salt-flecked ports of the ship's saloon is hardly more or less real than the flow of images on digital screens spreading news from across the world - images mirrored to infinity in the semi-frosted glass dividing sections of the saloon; on one banquette where a man like one of Caravaggio's boys surrounded by beautiful young women is on his mobile explaining to someone in accented English why their visit to Pompeii - three hours drive from Bari - will be delayed by the late arrival of the ferry - tap, chat, tap, chat, tap... 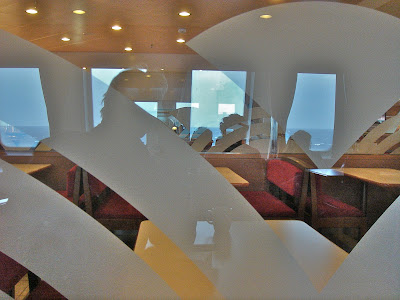 From Bari Centrali, retracing my journey to Corfu in mid-January, my train speeds north to Bologna... 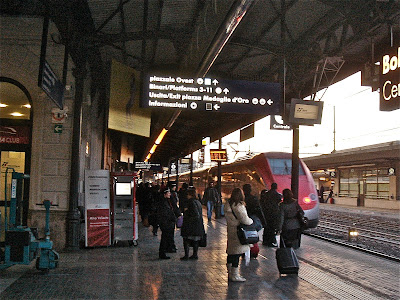 ... where I post two more letters to Lin and mum written as the train sped up the east coast of Italy. At 8 it draws into Venice St.Lucia. I cross over Constitution Bridge, leave my bag at Casa St'Andrea, return to get a 24-hour vaporetto pass at Piazzale Roma, taking a chilly night run past Giudecca to San Marco, wending back to a warm room and more pages of Little Dorrit, coinciding with Dickens' using the, now, rich Dorrit family's visit to  the city of light, to transmit premonitions their residence in the Marshalsea had been but one kind of custody. 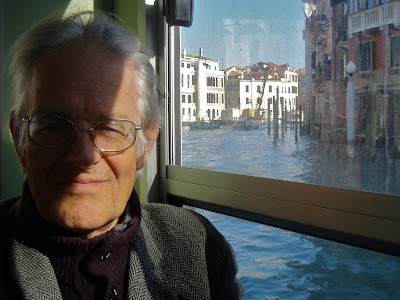 Next morning, 10 hours to enjoy before my flight from Treviso, I stroll out under a cloudless sky, sparkling water. There's a transport strike. I join a crowd on one of the few working boats, getting off at Arsenale, walking down Via Garibaldi... 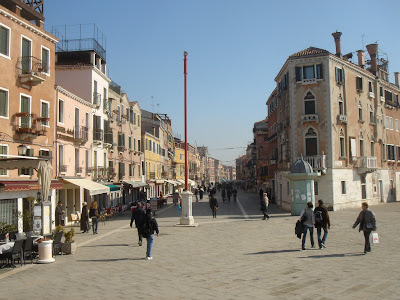 ... coming upon Serra Gardens, having a coffee there. At a side of the gardens there's a the functioning slice of salt marsh showing a close-up view of the sandy mud, flora and fauna of the Venice Lagoon; working my way vaguely westward; wandering down alleys, through squares, over small hump bridges, agreeably disoriented, until I came to a museum in a calle I could span with my arms - a doorway into Palazzo Mocenigo full of costumes and fabrics, dark and high and, somewhere, people talking and music...

Descending to the street I meet the player and her companions at a turn of the marble stairs
"What was the instrument you were playing?"
"A theorbo - in Italian - tiorbo"
"You play beautifully"
"Thank you. I am Francesca Benetti. Give me your e-mail I will send you a DVD"
*** ***
A proposal to our local CDT posted on Localise West Midlands:
Our Community Development Trust, when set up, will include, or be neighbours with, a significant amount of green space in the form of gardens, parks, playing fields and, of course, allotments, with Uplands, just outside the ward being the largest allotment site in northern Europe and arguably one of the most successful when it comes to growing food. I myself have a plot on the new Victoria Jubilee Allotments next to Handsworth Park. I mention allotments and other green spaces because I would want to ensure that the city council’s low key, but quite intensive, long-term plans (matching those in others cities in the UK, especially London) for producing more food locally are included in future agendas of the new CDT.
The need for local food production as opposed to supermarket products arriving here from centralised packaging and distribution centres involving hundreds, if not thousands, of miles of road haulage is obvious enough in an age of increasing energy costs. It helps that in this area we have many food retailers who are sourcing their food more locally and selling, not in shopping malls but in outlets on our high streets – Villa, Lozells and Soho Roads. 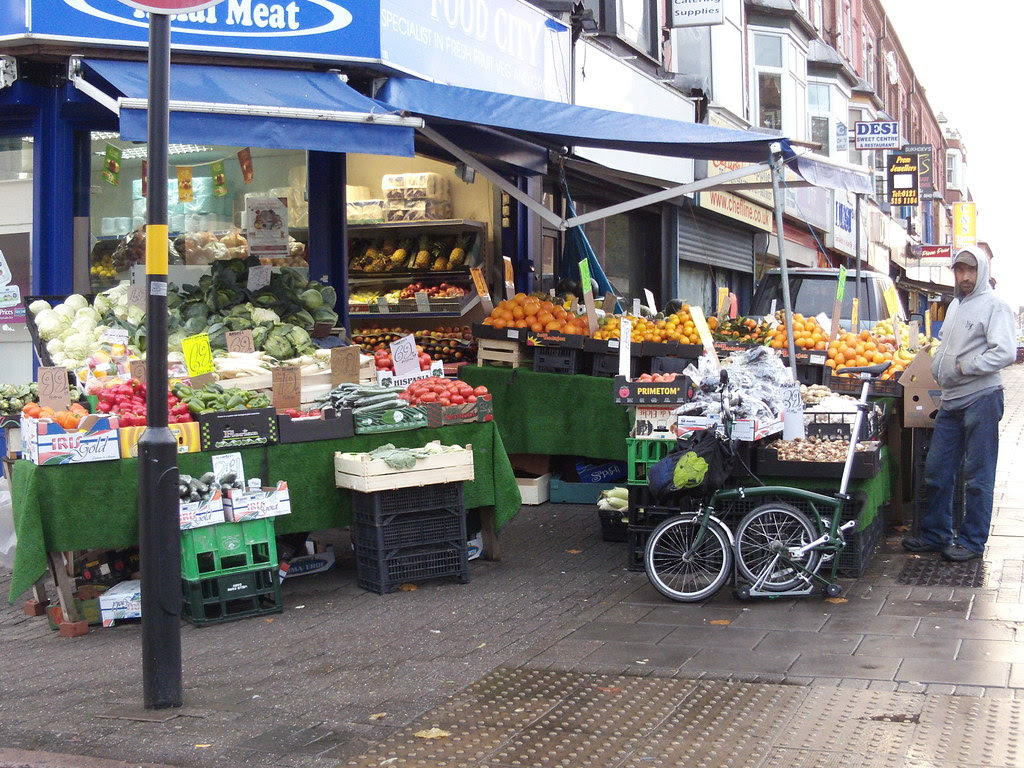 There is also the matter of health as this arises from the quality of locally sourced fresh food – not only vegetables. We even have that rare thing these days – a local abattoir in Hamstead Road. There are many trends from government in Brussels downwards, working against the maintenance of local sustainable food production. Our CDT can play a role in educating the community about their role in growing, retailing and consuming local food, as well as influencing those agencies and individuals at national and regional level who already support or, if better informed, will support polices for local food both in the home and via the procurement policies of our schools and other institutions.
The Faith and Food Festival on Saturday 19 May this year is an important conference in which many of us are already involved. I believe the worm is turning in the matter of localism. A British farmer – Julian Rose – remarks:


...the European Union doesn’t like small scale self sufficient units that look after local people with good quality fresh food. No, it likes large scale monocultural farms employing as few people as possible and turning out thousands of tons of bland, foods to be sold in some vast bland and lifeless shop at the other end of the country. The EU wants farmers to be business men and make decent profits so they can be taxed and provide a decent revenue to the government.

At the moment my emphasis may seem counter-intuitive, given other imperatives – housing, education, transport – but we all share a keen interest in our local environment and most of us recognise the national and international implications of what is now known about the reality of human influenced climate change. The way our food is produced and consumed is intimately connected to that challenge, described by successive political leaders as a more significant threat than terrorism.
I very much hope that the East Handsworth and Lozells CDT, when established, will give, in its early policies, serious attention to the area’s agricultural potential, and give corresponding attention to its green spaces – resisting the ever present inclination to surrender them, via the temptation of planning gain deals, to further building, on the mistaken assumption that losing growing space to bricks and concrete enhances the local economy, rather than putting profits into the pockets of people and institutions habituated to sucking money out of local economies (My response to Birmingham's Big City Plan consultation in Jan 2009 - scroll down)


Note: Lozells, Birchfield and Handsworth People’s Conference – 10.00 – 1.00 pm on Saturday March 3 2012 at City College Birmingham (Soho Road Handsworth Campus B21 9DP). The Conference continues the theme ‘communities coming together’ - how, with fewer resources, residents, third sector and public sector organisations can work together to make Lozells, Handsworth and Birchfield better places in which to live and work. People’s Conference 2011 succeeded in raising key themes and putting forward recommendations for addressing them.  We have been acting on those recommendations and are organising this Conference as a way of sharing with you what we have been doing as well as illustrating some of the exciting initiatives occurring across the ward.