The Highlands for Hogmanay 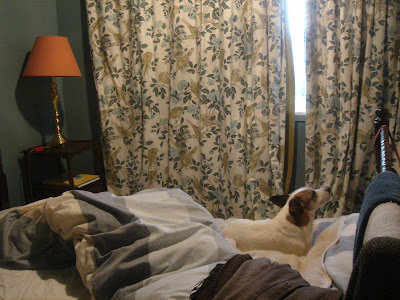 Lin dropped Oscar and I off at the top of New Street at midday on Thursday and we strolled through sales crowds to the station - a little exercise for the dog before the train journey. I passed the 400 miles north in a sort of trance watching an exciting film - Michael Clayton - reading a police procedural wrongly described as a thriller - Cradle Song by Robert Eric (I see the author's tight unspoken rage in the title - from Blake's poem); buying cups of tea and coffee, snacking on Lin's picnic, a miniature of malt whiskey, a small bottle of red wine with baguettes and liver pâté, mince pies, the steady tumble of the train through darkening countryside, past Preston, Lancaster, Carlisle, Lockerbie, Edinburgh Haymarket, and the single track trail in rain spattered darkness through the passes to Inverness, Oscar squirming with delight as he raises his leg to claim the land again and join up with his friends Bibi and Lulu. Sharon had waited an hour at the station to collect me. "Next time the train's delayed go home and I'll get a taxi". At Brin Croft I hugged and kissed mum in her arm chair. She told me to help myself to a glass of Dalwhinnie. Sharon had prepared a rich steak pie for us. Mum and I talked about the family, about the past and the present, though very little about general news. We spoke of Arthur's radiation treatment to come, of the allotment. I showed off pictures of the shed. We described our separate Christmas days (she'd been in London with my sister Bay's family); of the coming grand - and for mum - great grandchild. I showed her Amy's ultrascan movie of the baby she knows for sure's a boy, and another sound byte of her baby's heartbeat. Mum said "It's too much.". I'm wasn't sure I didn't agree, but the tests and monitoring have to be good. Leonardo five centuries ago working from corpses believed that the foetus in the living mother had no heart beat.
We discussed the Leonardo exhibition and the books with pictures of his she'd got strewn about.
"I couldn't get to, or rather I wouldn't. Too many people."
"The same problem applies to Hockney's Yorkshire landscapes."
"I want these pictures to myself with all the time in the world - not trudging by with a crowd, fifteen quid for the whole tour in half an hour." All the same Hockney's countryside pictures looked wonderful in her RA magazine
"Imagine them covering spaces the size of this house."
In the morning I slept late. I had dreamed about giving a child advice on life - inadequately. Later I was out walking with the dogs, trudging in warm clothes with good boots in steady rain. A contraption for an instant alarming since unrecognised unfolded from its perch on a stumpy erratic. The only life but sheep in the drab landscape - a buzzard flying off matching its flight to the line of the trees beside my path so only for a moment did I catch its actual silhouette against the sky. I tramped through empty woods along a soggy pooled track of a giant logging truck. 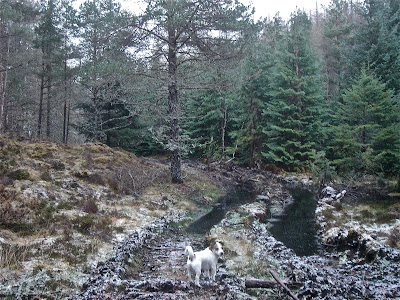 The dogs as usual raced about oblivious to wet and cold, like me. I love this weather and this landscape, not least for the having of it to myself with toast and tea after towelling down soaked dogs when I get back to Brin Croft.


*********
In precious Ano Korakiana ~ Χριστούγεννα με Σπύρο Σαμάρα 31.12.11. Last Friday evening the band held it's Christmas event in the main room of the Agricultural Co-operative - a concert dedicated to the composer of the Olympic Anthem, Spyros Samaras, a reminder of the wide ranging brilliance of that Corfiot composer whose name was adopted by our band, introduced by the vice-president of the Philharmonic Association, Andreas Metallinos. 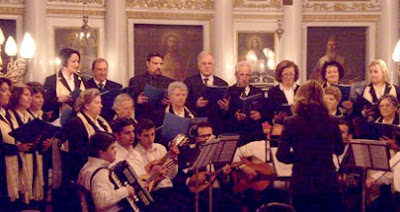