How the weather changes over Corfu

In the early hours I woke to the rumble of heavy rain, the house vibrating under the downpour, continuous lightning flickering through cracks in the shutters, thunder far and close from every direction. I jumped out of bed to close a window left open in the sitting room. Lin got up to to watch the storm. Back in bed, I relished listening, in the dark, to the noises around us – warm and safe. Now and then in the longer flashes I glimpsed Lin in her scarlet kimono gazing through the French windows, rain spattering the other side of the glass. One of my delights is to be safe in the midst of a storm. It may seem odd, but even at sea in rough weather, off-watch in one’s bunk, in a well-found vessel this is possible, the cradle rock of waves adding pleasure, and moments of apprehension caused by a breaking crest or harder gust calmed by confidence in crew and boat – thus do small seabirds ride out the tempest heads tucked beneath a wing. In the morning the sky was clear for a few hours; our veranda below the balcony almost entirely dry except for a patch where rain had driven in, fast drying under the sun. But during the morning rain clouds, born on the south wind, spread from the Trompetta Ridge to fill the sky, relentlessly surrounding the diminishing blue. This is, at first, odd. I should know how it works but I forget. The warm grey wet thundery weather appears to come from the north, from over the mountains behind us, taking over the blue weather from the south. In fact, quite the reverse. The wind blows warm from the south evaporating water from the sea, carrying it north, forming clouds as it rises over Trompetta. On the highest ridge these thicken, back up and spread, encompassing the sky. A southward advance of grey darker edged phalanxes encircles the blue; in the van a great reverse crescent, one wing advancing along the mainland shores of the Sea of Kerkyra, the other along the mountain cliffs of the island’s western coast, until this wide pincer movement has advanced to the whole southern horizon, covering the sky mottled grey. 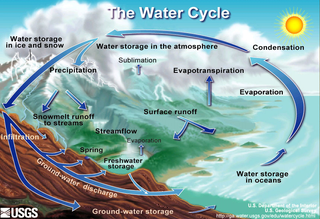 It is strange gazing on this defeat of the blue to gaze up from the village at the rear ranks of so overwhelming an attack and see the clouds overhead drifting swiftly north – almost as if a victorious army were returning in triumph. It's easy to sidestep the 'water-cycle' we learned in primary school, and imagine animate conflict. It's even more interesting.

* * * *
In anticipation of soon receiving an electricity bill containing, not just the existing tax on our property, quite small relative to the charge for power, but a much higher emergency property tax introduced by the government, we’ve just taken a tape measure to our house. The electric company estimates our home’s footprint as 77 square metres.

Our calculation this morning put this at 64.3 square metres, based on a length of 8.22m and a width of 7.55m, suggesting we’ll paying the new tax on 12.7 square metres we haven’t got. Stamatis at the shop says the charge in the village will be €3.50 a square metre – equalling an extra on our next electric bill of €270 on top of the cost of our electricity. I find it difficult to imagine such an increase being anything but impossible for some people to pay, even with concessions.


[Back to the future: 18 Oct: Advice - don't appeal against the electric company's estimate of house area. It's based on traditional measures that might have shifted to our disadvantage if we sought re-assessment,  i.e. people used to live upstairs and keep their stock - chicken, sheep, donkey - downstairs.]

The ill-news is backed by constant stories in the newspapers of the world - typical of these 'Greece is slipping into the abyss' from a British resident in Athens...


But we are only at the start of this crisis. What will happen next year when unemployment doubles and people lose their homes? The Communist calls for revolution don’t look nearly as far-fetched as they did six months ago. While civil war doesn’t look likely, a return to the military days must be a possibility. If the Greek people reject their entire political system and the state falls apart, what will be left? The great danger is that the people are being pushed so far that the unthinkable becomes possible.

or from America, 'for Greeks the future is void'...


anger and helplessness dig deep in the Greek psyche. Joblessness is climbing and essential services such as health care and policing are losing resources. The crisis may pale beside the bloody conflict or poverty in Libya or Afghanistan, but the hardship is as much psychological as economic. It is the shock of undercut expectations, the loss of benefits and prospects once taken for granted as part of the European contract. The mood now resembles the plot of "Groundhog Day," a 1993 movie about a man who wakes up to the same day over and over again.

** ** **
Richard House sent details of the letter in the Daily Telegraph, 24th Sept '11, which I co-signed about the blighting of childhood in UK


SIR – Five years ago, your newspaper published a letter signed by more than 100 experts, arguing that children’s well-being and mental health were being adversely affected by modern technological and commercial culture. Since then, several high-profile reports on the state of childhood in Britain have agreed that our children are suffering from a relentless diet of "too much, too soon" – with UNICEF finding Britain to have the lowest levels of children’s well-being in the developed world, and Britain coming out near the top of international league tables on almost all indicators of teenage distress and disaffection.
Although parents are deeply concerned about this issue, the erosion of childhood in Britain has continued apace since 2006. Our children are subjected to increasing commercial pressures, they begin formal education earlier than the European norm, and they spend ever more time indoors with screen-based technology, rather than in outdoor activity.
The time has come to move from awareness to action. We call on all organisations and individuals concerned about the erosion of childhood to come together to achieve the following: public information campaigns about children’s developmental needs, what constitutes "quality childcare", and the dangers of a consumerist screen-based life-style; the establishment of a genuinely play-based curriculum in nurseries and primary schools up to the age of six, free from the downward pressure of formal learning, tests and targets; community-based initiatives to ensure that children’s outdoor play and connection to nature are encouraged, supported and resourced within every local neighbourhood, and the banning of all forms of marketing directed at children up to at least age seven.
It is everyone’s responsibility to challenge policy-making and cultural developments that entice children into growing up too quickly – and to protect their right to be healthy and joyful natural learners. Top-down, political approaches to change always have their limitations, no matter how well-intentioned. It is only by coming together as a unifying voice from the grass roots, therefore, that we can hope to interrupt the erosion of childhood, and find a more human way to nurture and empower all our children.  Yours etc., Dr Richard House, Department of Psychology, University of Roehampton (the Open Letter’s organiser)...and many more.

Our letter make lots of sense but when it comes to how such ‘erosion’ might be halted I come to a halt. Part of what made my childhood special and indeed what other people of the same age share with me, is the great amount of time we seem to have had to ourselves, unsupervised, able to roam, explore, invent and take risks. Much of what was good - allowing for flawed memory - was unknown, secret, not determined by any theory of child rearing supported by government or parents. Imagine the field day the risk assessment folk would have with allowing today's children such freedom (but see this sensible stuff from the HSE), not to mention the protests of many parents at any public figure seeming to advocate policies that might allow it. To make sure I’m not varnishing my childhood with nostalgia; for 18 months in the late 40s, my mother having become single and wanting a career - demonstrating the doggedness needed by a woman to achieve that in those post-war days - entrusted me and my sister to what she believed was an idyllic country boarding school. Charles Dickens would have enjoyed naming the head of this benighted institution near Brimpton in Berkshire, but he really was called Mr.Hart. Many years later, in middle age, I did a little research into this school, Lindfield, and even visited the building - Hyde End - now an attractive private house, in which we lived - a place about which my 94 year old mum still feels guilt. I got in touch by phone with a local lad who’d been a day-boy at the same school in which Bay and I were boarders.
“Oh yes” he said recalling the place "Hart only beat the boarders.”
I did not suffer that much, but watched others. Possibly my parent was considered just a little too potentially influential. Such a school with such a head would, in today’s world, have been dealt with by the child-protection authorities quicker than Hart could raise his busy cane. In those immediate post-war days such schools and their staff enjoyed the same freedoms and rights to privacy our letter against the erosion of childhood suggests be restored to contemporary children. Dilemma! By way of a happy ending, I was rescued from that awful prep school and went to another that was like day to night in comparison, and which indeed allowed us, within a wisely structured syllabus (we planned our own lessons each day but had to include so many sessions doing the subjects we found trickiest like maths, Latin, English grammar, French) rather than just art and history and English literature) a liberal amount of free time to roam a large wooded estate near Handcross in Sussex, to be children in charge of our own adventures. No doubt in today’s litigious world this amount of freedom to risk life and limb climbing tall trees, building houses in them, roaming through rhodedendron undergrowth chasing predatory monsters (I played a man-eating tiger lurking in the brush in one adventure I’ve recalled just this moment) with sticks and other missiles, would be near impossible. I hope not.

*** ***
I mentioned this in May. Carol, a lovely woman, kind and enterprising, asked me to mention again that at The Lighthouse - ὁ Φάρος - in Kontokali at its border with Gouvia, there's a big table top sale every Saturday from 1000 until 1300, soon to be extended until 1400. Upstairs there's soft drinks, tea, coffee, snacks, WiFi and computer games and a children's library and supervised play area. Local phone - 6982458157 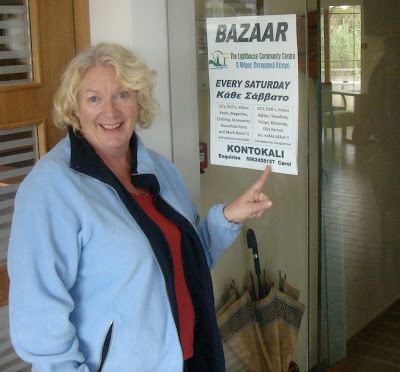