A heady scent rises from Lefteris’ garden. The weather’s clear enough of rain for pressing grapes. The juice that’s begun fermenting in the large tub from last week’s crushing has been siphoned through a sieve into a tall barrel from where it’s been siphoned into glass flagons. The crushed grapes, left in the tub after most of the liquid’s been bottled, are now hand decanted into the barrel of the press, with a big saucepan. 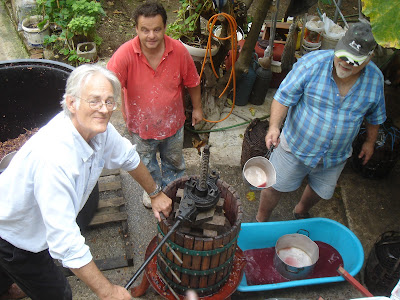 The shallow threaded screw press turned with an iron bar ensures a steady stream of juice into a plastic bath from where it’s transferred in a wasp-waisted metal canister to a tall plastic barrel from which it’s siphoned into more flagons stored in Lefteris’ apothiki. The ratchet on the press is reversed – while working this I was minded of the Sherlock Holmes story about the engineer’s thumb – its hub turned back to the head of the screw, the wedges removed, and two halves of the press barrel held by sturdy iron twist bolts are removed from the cylinder of smooth pressed pomace, tsipoura, and left in the tub where they can’t collect dirt. 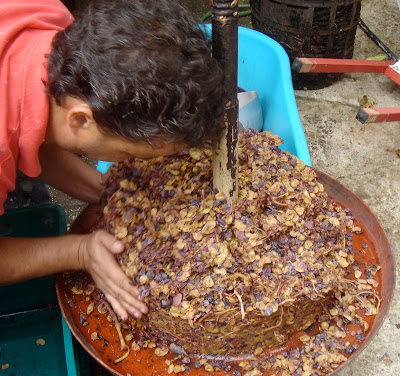 The pomace is eased apart and set aside as compost; not to make tsipouro. My small work on the press and earlier on the crusher attempts an exchange for all the bottles of wine Lefteris and Vasiliki hand us over the year.
Monday morning I collected Emma and my son Richard from the airport. Yianni makes it easy for them to share the car, so Richard drives us back to the village.
“Had a good flight?”
“Terrible. Turbulence from the time we took off and the plane was freezing. Then they said we could have blankets – for only £5.00”
Once home having not slept the night before they disappeared until evening.
By late afternoon I’ve finished helping Lin attach the rest of an old wooden blind, recovered from a flytip last year, over the scrawny wire fencing between us and the neighbours, so we can still see through and over to chat.
“I’m going for a ride on my large bicycle”
“OK. I’ll go on preparing the last set of shutters”
Guiltless I set about extracting the bicycle from where it hangs in the apothiki, blowing up the tyres, preparing a snack. I want to see if I can get up the 29 hairpin bend ascent to Sokraki, Σωκράκι - the village invisible above us on a ridge of the Trompetta Range, Τρουμπέτος  Οροσειρά, that runs east-west across the north of the island. At 4.30, gingerly, I set off. In 15 minutes I’m resting at Ag. Isidorus on the ninth bend above Ano Korakiana. 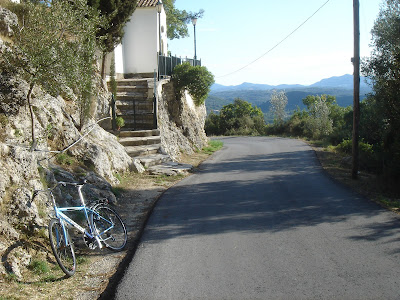 If I can pedal up this road I reckon I can cycle any road on Corfu. I expect to walk some of the way, but this zig-zag route has persistently kindly gradients. At each bend I skirt round the left hand edge of the bend – unworried by being on the wrong side of the road. Motors can be easily heard. The higher I go, still pedalling, the quiet envelops me. Nothing but the breeze, increasing with height. Unfolding below, the island's limits become clearer. On the first stretch of the road above Venetia I see between the slopes above Doukades, about six kilometres west, a wedge of glittering sea, while on the east of the island I can see the widening Sea of Kerkyra, θάλασσα Κέρκυρα, blue as blue skirting the island’s blighted shores and the distant bare slopes of the Greek mainland towards ugly Igoumenitsa in the haze, and all below the deep green of the island’s interior, in which nestle and blend traditional buildings – new and old - while here and there the thoughtless proportions and angles of buildings constructed in uncouth isolation from time and place. 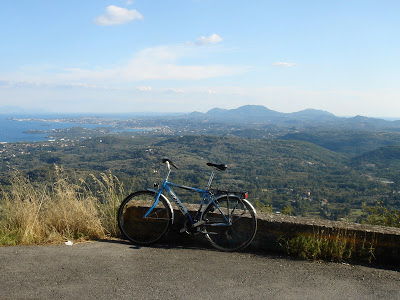 Staying in the lowest of my 21 gears I find pedalling up each stretch easy. I’m pleasantly surprised, having expected to dismount and walk at several points on the ascent. I lose count of the corners, stopping now and then to rest and gaze at the widening panorama. In under an hour I’m sipping cold ginger beer at Emily’s Taverna in Sokraki along with a toasted cheese and ham sandwich. 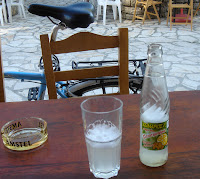 I am pleased with myself and the bicycle. The sign at the southern entry to the village reads Trompettas. This is a new road built only a few years ago, to a lower specification than the ascent road, and here, heading west on the north side of the Trompetta ridge approaching mount TsoukaI I come to the only hill on which I have to walk for a kilometre. Beyond either verges are abandoned or ill-worked allotments with makeshift gates and collapsed fences containing a couple of rows of vines and a cluster of olive trees, in some cases a few rows of vegetables. 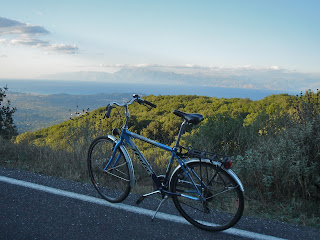 Rounding a bend I see the higher mountains of Albania north of Saranda and, down the northern slopes below me, villages - Klimatia, Episkopi, the hamlets of Kiprianades, Valaneo, Ag Douli, and further away Nimfes, Mili, Xanthates, Platonas and Sfakera, between the high road and Roda on the windy northern coast. Then my road snakes down to the hamlet of Trompetta on the busy main road between Corfu Town and Sidari and I hardly turn a pedal for six kilometres to Skripero. A couple of kilometres more and I turn for Ano Korakiana, up gentle slopes to home – the whole circuit in two hours with breaks for rest and a snack. As I pedal the last half kilometre a couple of people wave and I boast, in halting Greek, of my climb to Sokraki and return to the village
“Mono theo oras!”
“Bravo, Simon” 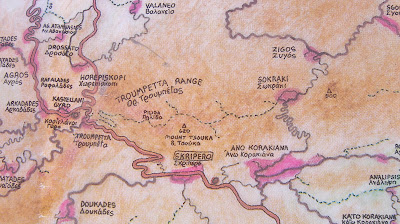 *** *** ***
On Tuesday the weather is once again sunny, as predicted by our neighbour who, being born 69 years ago in the same house he lives in now, knows pretty well how Corfu weather works. October, like Easter, is a good time to be in Greece. The rich who invented the present concept of the ‘holiday’ – not religious feast or holy days but secular relaxation – later offered the idea, as a utility for the rest of the population. The gift is topsy-turvy in that the prosperous could afford when they chose to follow the weather, leaving cold England to winter in the Caribbean, or North Africa, enjoying spring and early Autumn along the Mediterranean littoral. Holidays for the majority, when they were introduced as a result of social reform in the late 19th century, were taken in July and August – the warmest weather in the north, thus trains and charabancs decamped in thousands to the occasionally warm beach resorts of England and Wales – Blackpool, Brighton, Hayling Island, Rhyl, Yarmouth, Ramsgate, Morecambe, Torquay, Bournemouth and Ilfracombe to name a few. Then when in the 1960s mass tourism was invented, flying large numbers at low cost to the Mediterranean and beyond, guess which months were chosen, were indeed the only ones available to most? The months of a British summer, which in southern Europe are the ones when even local people, used to the heat of June, July and August, swelter, staying indoors in the day, observing siesta. In hundreds, then thousands and then millions, people travelled for a week or a fortnight at a time to the Mediterranean at the least salubrious times, suffering in their package sojourns sunburn and sweat, welcoming air conditioning, freezing drinks, and swimming pools with plenty of the shade less available on burning beaches. Now that package tours encompass the Pacific and Caribbean, guess again when the unrich have their holidays – in the humid heat of the hurricane season. Meantime the rich who’d wintered under waving palms by the bathwater warm seas of the Leeward islands, are yachting in the Baltic archipelago, fishing in the remote lakes of Saskatchewan, surveying the fiords of Norway, and observing the summer wildlife of Alaska, cycling in the Highlands of Scotland, chasing seasons of choice in both hemispheres.
** ** **
We carted our some loose plaka back to the house. Lin laid it to cover the rather pointless 'flower bed' that guided damp into the wall below the lower bedroom window. 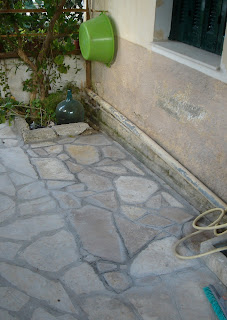 I found a large floor membrane left by the builder under debris in our apothiki.
“Let’s try this on the wooden balcony”  I suggested “as an additional shield for the polythene sheet from sun wind and rain.”
Lin’s good with large ungainly pieces of fabric. In twenty minutes the membrane – part folded – was covering the balcony and with that protection for the polythene I laid out tables and chairs.
“There’s more needs doing” says Lin “Let’s put additional roofing felt patches, fixed with a silicone bead, on the outside edge of the balcony where we had to cut the felt and polythene to fit them round the nine banister pillars. The rain we had the other day found a way in there.”
We peeled back the plastic and the felt from the damp edges to let the damp wood, felt and wet polythene dry under the sun. After a couple of hours we cut and laid the felt patches. Doing that properly took an hour. Then I nailed battens to the balcony plank edges all round after putting further silicone beads round every exposed joint at the base of each pillar.
“Rain’s due on Friday. Let’s see what happens.”
The last two evenings I’ve lit the stove. 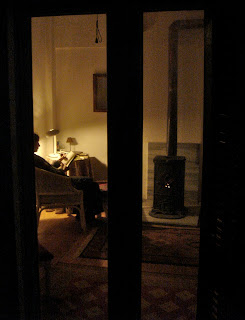 **** ****
“You must have your work cut out at the moment”
I was talking to the evangelical pastor, Miltiades Pantelios, at the Lighthouse the other day - a place we go for the table top sales on Saturdays, the free WiFi and nice filter coffee.
“Yes indeed. The worst thing for people is the feeling that there’s no end in sight.”
“It brings out the worst but also the best in us, I guess” I added lamely, feeling an ache in my stomach, part of me wanting a kind of restoration of things as they were, but the larger part hoping this long storm of blighted hopes, this absurd and dangerous sequence of increasingly desperate attempts to kick-start a deeply unresponsive engine – with different kinds of stimuli, austerity, taxation, collateralisation, quantitative easing, selective devaluation, financial restructuring - will be as futile as I suspect, leading through many crises to wiser ways of living on the earth. 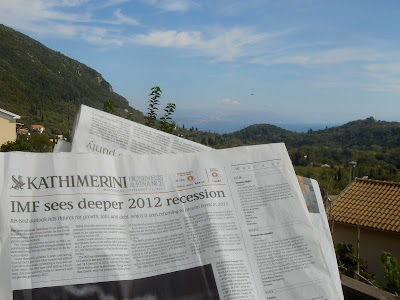 *** *** ***
Yesterday we went via Krini to Angelocastro; climbed the steps to the high fortress and had a family picnic under the oak tree there. 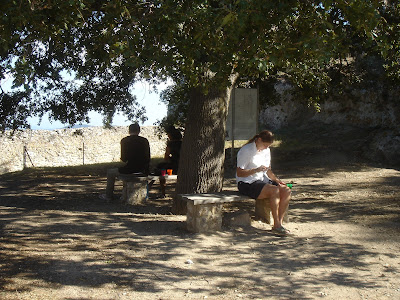 In the evening Richard showed us his three minute video of Handsworth Park. A pure delight. We all watched a few episodes of Little Mosque on the Prairie. I'm reading The Tiger's Wife by Téa Obreht, having just finished Kingdom of Ashes by Robert Edric - a novelist I'm more than glad I've come across.
Posted by sibadd