Worth a few onions and a turnip

I was chatting to the gardeners on plot 34 on the Victoria Jubilee Allotments. They told me they worked four hours a day on their allotment - two in the morning and two in the late afternoon. They were concerned about weed seeds from the unworked plot next to theirs, so as a favour I mowed it for them and they gave me a turnip and some young onions.

Plot 33 was full of thick dry stalks - dock, thistle and couch grass in which it was impossible to get a proper circular swing or cutting rhythm. There were also bricks, stones and other debris hidden in the undergrowth - a familiar problem on the VJA whose topsoil was roughly spread by the developer only last spring. When I got home a I spent some time peening the scythe blade. This involves hammering out the bumps and small chips in the soft iron of the beautifully made Austrian forged blade - one that differs from the stamped and ground blades manufactured in England and the US. Austrian blades are wafer thin, delicately hand-forged to an elegant curve in three dimensions ideal for close cutting grass, so I was mindful of Simon Fairlie's observation that:


The only situation we have identified where the traditional English blades may possibly have the edge over the lighter Austrian blades is when dealing with heavy, tangled overgrown grass.

That describes most of the few unworked plots on the VJA. Unskilled sharpeners like me can make use of a peening jig which delivers the blow at the correct angle to a properly held blade - a blow that someone skilled could do on an anvil by eye and feel. I used a rough stone to work out any remaining bumps in the blade, finishing with a much smoother stone. I learn as I go, approaching the work with enthusiasm and humility. What I've learned so far is a mix of skills remembered from childhood, and subsequent experience following a grounding in the craft by Simon Fairlie, who by running workshops and importing scythes and scythe parts, has made a great contribution to a wider appreciation of the efficiency of a skillfully handled scythe, with the right choice of blade set at the right angle, properly and regularly sharpened, with the handle adjusted to the user. I used a blade on plot 33 which has a small tine on its tip which affords some protection if I hit something hard while mowing.

Our own plot is coming along nicely. I dropped over on Sunday with Oscar and worked on sifting out couch grass from the soil I've dug and rough hoed with the azada. This takes more time then the original digging - teasing out these slivers of root which spread netlike close to the soil surface gripping harder than nettle and thistle roots. Delith on a plot nearby said that the deep rooted dock didn't need pursuing so long as I cut them off at the surface. "Their roots force nutrients up the the soil surface" she said. I hadn't thought of that.
Jill and Lin came over to help complete the foundations for the shed. It's possible that we'll have it raised by the end of the week. 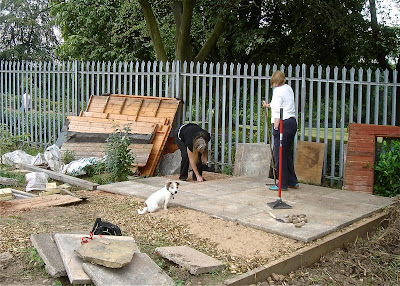 "One day people will unearth these mighty slabs. They'll wonder how they transported such weights from King's Heath to Handsworth? What were they like these allotment people? How did they think? What were their cares? Some questions may never be answered but we can still wonder..."
"Yeah, yeah. Can you just lift it so I can get some more gravel under it"
"How did they achieve such precision with such simple tools?"
"A bit higher. OK. OK not that high. That'll do. Now let it go. Let's go home" 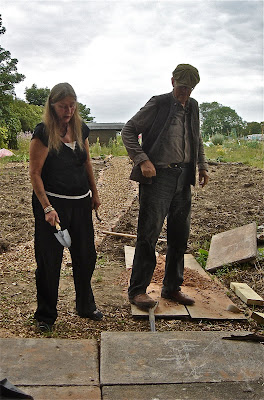 I engage in urban pastoral, a middle class comfortable, cultivating city sylvan on a Δημοτικό περιβόλι, a few minutes cycle ride from home, where I see the world's gaze on Greece, read the latest round of social web comment, view images, the sights and sound of civil commotion, violence and shouting. One writes: 'Εμείς γεννήσαμε τη δημοκρατία, εμείς τη σκοτώσαμε!' 'We bore democracy; we killed it.' Ah! That believe that democracy was once perfect rather than just another system of government. We are saturated by Greece,  grown up in the society of the spectacle, as Debord put it in 1967 ‘a social relationship between people that is mediated by images’. His
followers carried his argument too far, but he was half right. The idea of the society of the spectacle endures. It is not only the media that are saturated. We are. Gil Scott-Heron, who died this May, sang in 1974 The Revolution Will Not be Televised, commenting powerfully on the relationship between the media and what we ...
"sorry but who's 'we'?"
... take to be political activity; the famous for 15 minutes auditorium foreseen by Andy Warhol...
"Hold it a moment, I'm having a rant"
... Is there any connection, other than through images, between what’s happening in Egypt, Spain and Greece? Are the indignants the bellwethers?

I liked the article on the indignants in 1 July Kathimerini by Harry van Versendaal – spiced with conditionals - that went with the picture of the man in the Odos Dimokratias tent, pointing out the soupy ingredients of Syntagma's mêlée.  He’s sympathetic yet unconvinced “some see”, and other intransitives “it may be that...”. Mark Mazower a scholarly expert on 20th century Europe and the history of modern Greece writes in the New York Times on 29 June of Democracy's Cradle, Rocking the World...'it falls again to Greece to challenge the mandarins of the European Union and to ask what lies ahead for the continent.'
Is that possible? Can twitter, one of the agents of the saturation with the rest of the social web, do more than stir a contained pot lacking the astringency of practical ideas, practices or analyses to addresses the complex dynamics of modernity?  The fine tables around which the IMF ministers sit witness equal confusion and variety but they can carry on in suits debating in privacy, preserving their dignity in public. The dominant spirit is confused uncertainty (yes Yeats – not ‘anarchy’, but ‘mere anarchy’).
...How I've come to write in english sprinkled with hypertext wandering on the screen as once one used footnotes on paper...
Can anybody really believe that direct democracy might represent a solution? Democracy, which I’ve cared about because it’s such an imperfect form of government, is marginally better than its alternatives, needing constant re-invention by people who understand the machinery of government - like how to collect taxes in a city where bright prosperous folk camouflage their swimming pools to evade tax. So it goes. The crowd in Syntagma reminds me of the ‘children’s crusade’ - that exercise in manipulated futility I learned of at school; how it ended with the enslavement of the few misguided children who survived, and might never have happened, or been no crusade but bands of wandering paupers. Meantime in other parts of the world other things are going on.
Posted by sibadd