Prableen Kaur wrote.'It has now been several hours since all this happened. I'm still in shock. Everything has not fallen into place.'
*** ***
On Friday I cycled over, with Oscar, to Livingstone Road Allotments to attend a presentation of a cash donation by the Bank of Ireland to Birchfield Residents Action Group. I was invited by Mike Tye, who chairs Central Handsworth Practical Care's Advisory Group, is also Secretary of Birchfield Residents. Before the presentation I wandered along the hedged path between the Livingstone plots - what a cornucopia of growth of every kind of vegetable, rank after rank of rich greenery from hedge to fence, hardly a square inch of uncultivated ground. It was a salutary reminder of what can be done, of what a way we have to go on the Victoria Jubilee Allotments, almost a reproach to us. 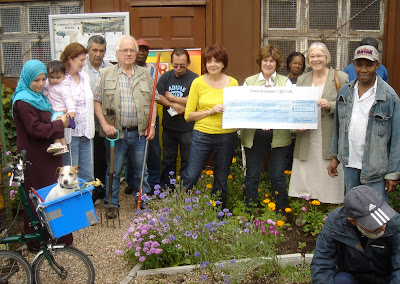 Once home again I got ready for my lecture on campus on this afternoon on Working with Officers, a session in the Inlogov Summer School for Newly Elected Members.
The day before I'd sent an email to Tim Pfeiffer, lawyer at Endemol who licence Contender, previously Southern Star International, to distribute the DVD series of Out of Town:


Dear Tim...I've been getting royalties on the Out of Town DVD series from Endemol which I share with their director Steve Wade's widow, in accordance with my stepfather's wishes. My query is about your stewardship of this product. In recent years lack of availability and marketing has meant sales of the DVD series of Out of Town are a fraction of what they were a decade ago. Yet the contents of several of these Contender branded DVDs have been streamed to viewers numbered in thousands on the web. Endemol, my family and the Wades are affected by this leakage of copyright material. Can the licensee act to achieve higher distribution of my stepfather's material in all our interests as well as achieving wider viewing of the excellent entertainment my stepfather's work offers - especially to many people over 50 who recall viewing his programmes in their childhood? Kindest regards.

Within a day YouTube had closed down nearly all the sites showing versions of Out of Town licenced by Endemol to Contender, previously Southern Star International.

Where sites were still working for other material the Out of Town clips showed: 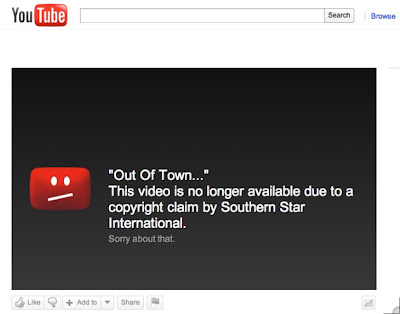 *** ***
I've just received in the post a new gadget for logging into internet banking - one that will no doubt soon become the norm for personal banking security. It feels ironic that nearly a century after Arthur Scherbius invented a mechanical cypher gadget that was to become famed in WW2 as the German Enigma Machine cracked at Bletchley Park by the British, I'm carrying out the mundane tasks of personal internet banking on a gadget designed on similar principles.  It means that every time I log into my bank account I have to use this small keypad to generate a new number. I wonder if this will actually increase personal banking security or just cause more inconvenience for customers. 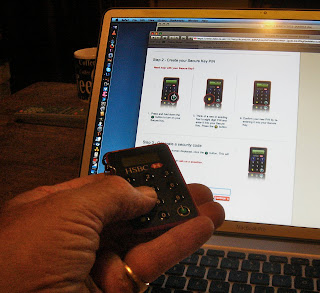 ** ** **
Ήχος α´ ποία τοῦ βίου τρυχφή διαμένει λύπης ἀμέτοχος. Cycling back from town with Oscar I decided to video the well known tendency of Jack Russell's to hang a back leg when jogging. Our Oscar, though half Border Terrier, is no exception. When we had him as a puppy he did this. People pointed out his hanging leg as though we'd not noticed. The vet could find no problem. Eight years old now, he still hangs his back right leg now and then. It's a Jack Russell thing and if the Kennel Club got its malign hands on the breed they'd no doubt have a competition class for specially bred three-legged terriers - for which there'd be a rich novelty market.
In the evening during visiting hours Linda and I went over to City Hospital to see our neighbour, Jo, who collapsed at home a few evenings ago. She was taken by ambulance to hospital and is waiting for the results of tests. Long long wide corridors, doors and doors and everywhere notices, posters, warnings, directions, the smells of the medical cosmos, beeping of monitors, rows of spaced beds like cradles for space travel, screens, tubes, buttons and keyboards and old bodies half awake peering around, gazing up half comprehending at small clusters of family and friends sat quietly about half-helpless, tableaus, a frieze. So this is how it could be. Jo was cheerful, sitting up, the nurses we saw kind and competent. She said she wasn't too bad. People were visiting. She was getting rested; had plenty to read and puzzles to do and could walk about the rest of the hospital. No it hadn't been too difficult to park. No a short walk. Oscar's fine. We've been working on the allotment. It's been a lovely day. The doctors will talk about you in the third person. Did they use you as a table to write on a clipboard? No not that bad. There's a lady can't speak a word of English who comes and tries to make conversation just to have the company walking up and down the ward at night. Another crying out for help. It's her legs. We're keeping an eye on John.  We send Oscar over to keep him company. He's getting fed. We age. My eldest Greek half-sister when we were young .Ὄτι ἐγενήθην ως ἀσκος ἐν πάχυη. 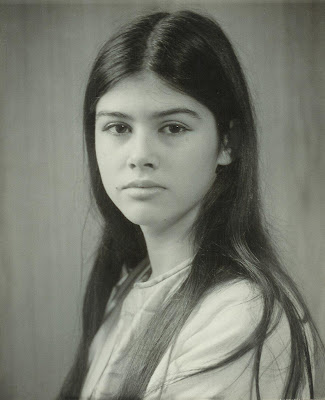 *** *** ***
The hard wind of rationalisation, the Bill for Rural Co-operatives promoted by the Ministry of Agriculture in Athens, is threatening the future of Ano Korakiana's Farmer's Co-operative whose building on the village's lower road has, while we've been there, used for village celebrations and other local events. Ano Korakiana's was the first Co-operative to be founded in Corfu - ο πρώτος Συνεταιρισμός που ιδρύθηκε στην Κέρκυρα  - at the beginning of the last century. The Bill requires the co-operatives in each region of the Republic to join up with a larger market-tuned company - The Co-operative Company, ένα νέο α’θμιο Συνεταιρισμό η Συνεταιριστική Εταιρεία. If a Co-operative is unwilling to join the new entity it will, by the end of this year, be treated as unable to continue - θα πρέπει να έχει καταβάλει μέχρι 31/12/ 2011, unless it can demonstrate an annual budget of €60,000. If it cannot do that over the next three years it will be judged as being not economically viable and forced to dissolve. This would entail clearing debts to third parties and distributing the remaining money among the other Co-ops - Αλλά ακόμη και αν έχει καλύψει τις 60.000 ευρώ μπορεί να οδηγηθεί σε αναγκαστική εκκαθάριση εφόσον για τρία συνεχή έτη η λειτουργία του κριθεί μη βιώσιμη οικονομικά. Τι σημαίνει αναγκαστική εκκαθάριση: εκποίηση περιουσιακών στοιχείων – εξόφληση υποχρεώσεων προς τρίτους – διανομή του υπολοίπου ποσού στους συνεταίρους. In the next few months the village faces two choices in relation to its Co-operative, join the new regional Co-op Company or show an annual budget of €60,000....'otherwise face obligatory liquidation and closure', διαφορετικά, ο Συνεταιρισμός μας...θα οδηγηθεί σε αναγκαστική εκκαθάριση και κλείσιμο...
Economic trends far beyond Greece have long been threatening the Hellenic Agricultural Co-operatives. Vassilis Patronis, who may still be at the University of Patras wrote a paper (undated but I think around 2000) whose title speaks to the problem - Between state and market forces: Greek Agricultural Cooperative Organizations (ACO) in transition period. Patronis suggests that ACOs are a typical product of the Hellenic political culture. Greek ACOs are did not come into being as a result of a grassroots movement by farmers - the way they emerged in other parts of Europe and indeed the world - but as the top-down creations of government aimed at aligning farmers’ interests with state politics. His paper finishes with a smidgin of hope, that  has echoes of Elinor Ostrom's ideas about the governance of the commons or common-pool resources, that the only way to evade the pervasive forces of economic globalisation, is via the organisation of local farmers promoting local produce locally retailed - in other words local 'bottom-up' action.


In a period when the ‘modernist’ policies seem to predominate, the future of the ACOs is based upon their reorientation and their virtual reconfiguration. The era of state indifference which ‘neutralizes’ the ACOs leaves at the same time a unique opportunity to cover the lost ground of organizational and managerial autonomy. During this period of transition the Greek ACOs still have ‘room for manoeuvre’ by taking advantage of the existing EU regulations (e.g. producer groups) and their closeness to the family farms. It is a period when the agricultural cooperative mobilization ‘from the bottom’ carries more power than it did in the past. (Vassilis, p.25)

The difficulty in Ano Korakiana is that the Co-operative has seen minimal recent connection with local agricultural production, tho' there lots of community involvement in the use of the building for social purposes, but for farming I'm inclined to say 'what farming?' There is less agricultural activity around beloved Ano Korakiana than there is around Handsworth and across Birmingham where the drive to produce home grown vegetables has created a private-public compromise that with a lot of ground level political support and capacity for local organisation secures a sound future for urban farming and the self-help activities associated with it. This entry on Democracy Street 'Small island in which I rejoice' gives a small feel for this kind of activity. I am conscious that we proceed with our local activity under an umbrella. This protection in the form of legislation and linked local and central government policy is one that has to be constantly reviewed, propped up, repaired and defended. You don't just get to grow vegetables on prime urban development land coveted by other interests by assuming it's some sort of god-given historical privilege. The plot we rent for £35 lies on a piece of ground with a fine view over Handsworth Park. If it a house were built on it its rent would be in the region of £7000 a year, or equivalent mortgage payment. That such market forces don't apply to our Plot 14 and its neighbours is not something that just happens. We enjoy the fruits of political activity supported by research, public meetings - all kinds of lobbying - letters, petitions, legal actions in favour of setting aside and protecting by law, a proportion of marketable urban real estate for growing foods, instead of building houses, roads, shops or factories. The arguments are complex, refined, evidence-based, well documented and illustrated.
Posted by sibadd